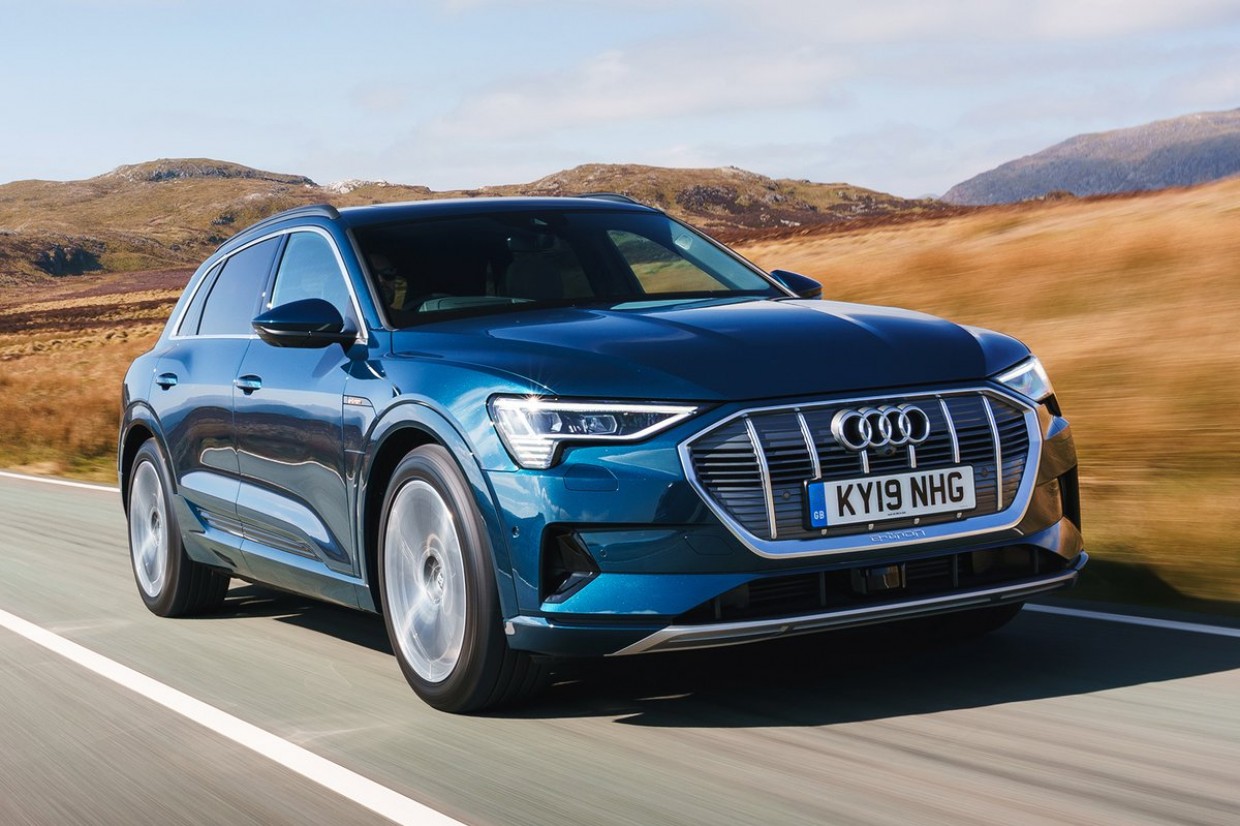 Sell it to me in a sentence….
Audi’s first all-electric car is one of the most comfortable, capable and hi-tech large SUVs there is, plus it's available in a variety of bodystyles and with numerous battery and performance options.

Okay, looks like there’s lots to know, so tell me more
Launching your first EV is a big step, so Audi took no chances with the e-tron, which has been designed to look and feel as normal as possible. As a result, this big and luxurious SUV wouldn’t look out of place parked alongside one of the firm’s traditional internal combustion off-roaders, which means it’s a handsome and beautifully finished machine. 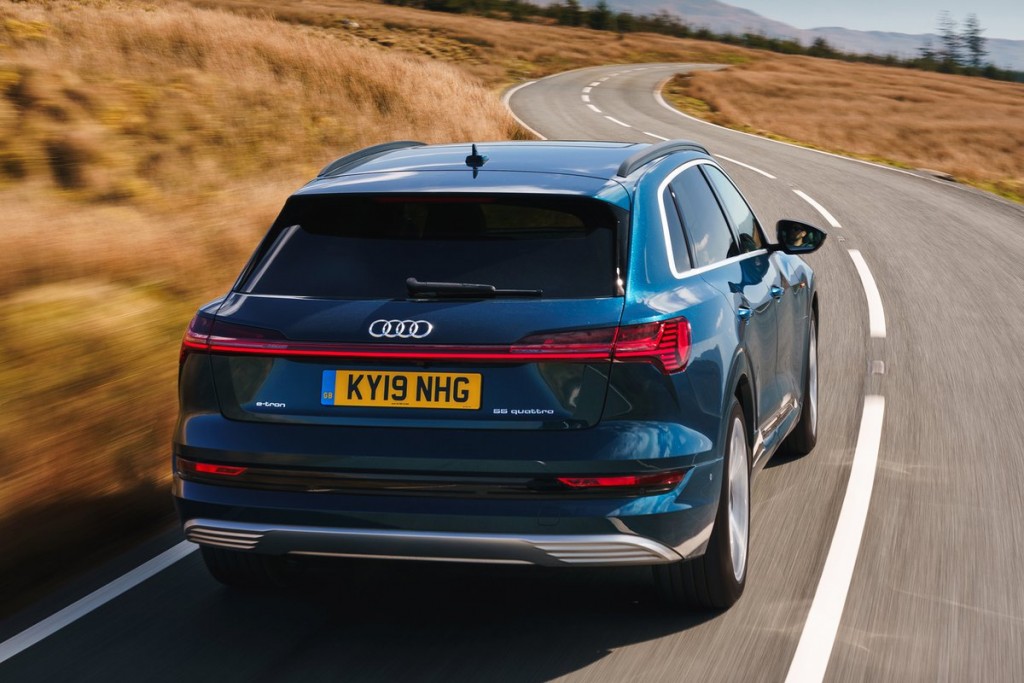 But don’t be fooled by its familiar looks, because underneath its restrained exterior is lots of cutting edge technology.  You also get a choice of body styles, with the standard e-tron SUV or the rakish e-tron Sportback which, like its close rival the Jaguar I-Pace, combines coupe-like style with rugged 4x4 touches.

Where the Audi really stands out is in its impressive comfort and refinement on the move. Soft air springs give the car a plush ride over even the bumpiest roads, while careful insulation means you hear barely any noise from the outside world - there are Rolls-Royce and Bentley models that aren’t as cosseting.

It’s a doddle to drive too, with accurate steering, strong grip and powerful brakes, while four-wheel drive traction adds all-weather peace of mind. Yes it’s a big old bus, but it’s easy to place on the road, while options such as four-wheel steering give it even greater manouverability and agility. 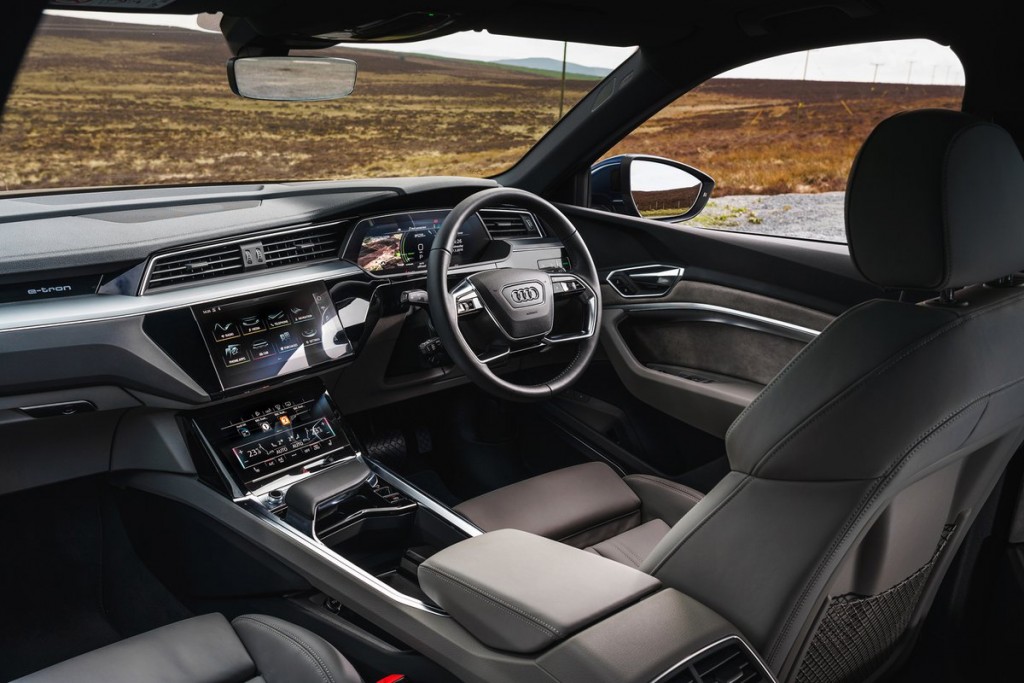 And while the exterior is a touch conservative, the e-tron’s interior is a work of art, with a crisp modern design and more TFT displays and glossy touch screens than a large branch of PC World. It oozes quality and upmarket appeal, with extensive use of rich and luxurious materials and bank vault quality fit and finish.

There are some really neat touches as well, such as the virtual door mirrors. In an effort to help the large SUV slip through the air more easily for greater efficiency, Audi has added the option of small cameras that are mounted on slim pods that sit where the mirrors are normally placed. These then sent images to small screens mounted on the insides of each front door just below the window. It takes a little while to get used to looking at them, but they do look really cool. 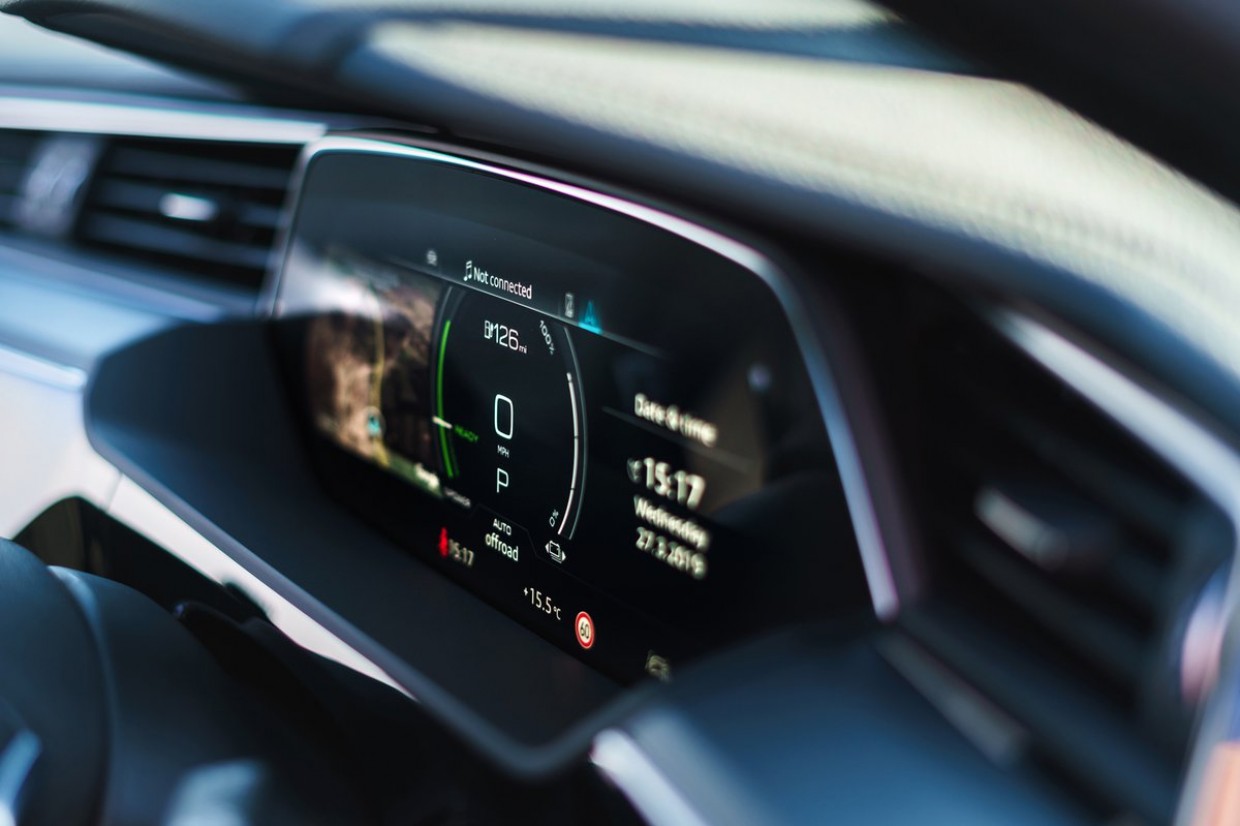 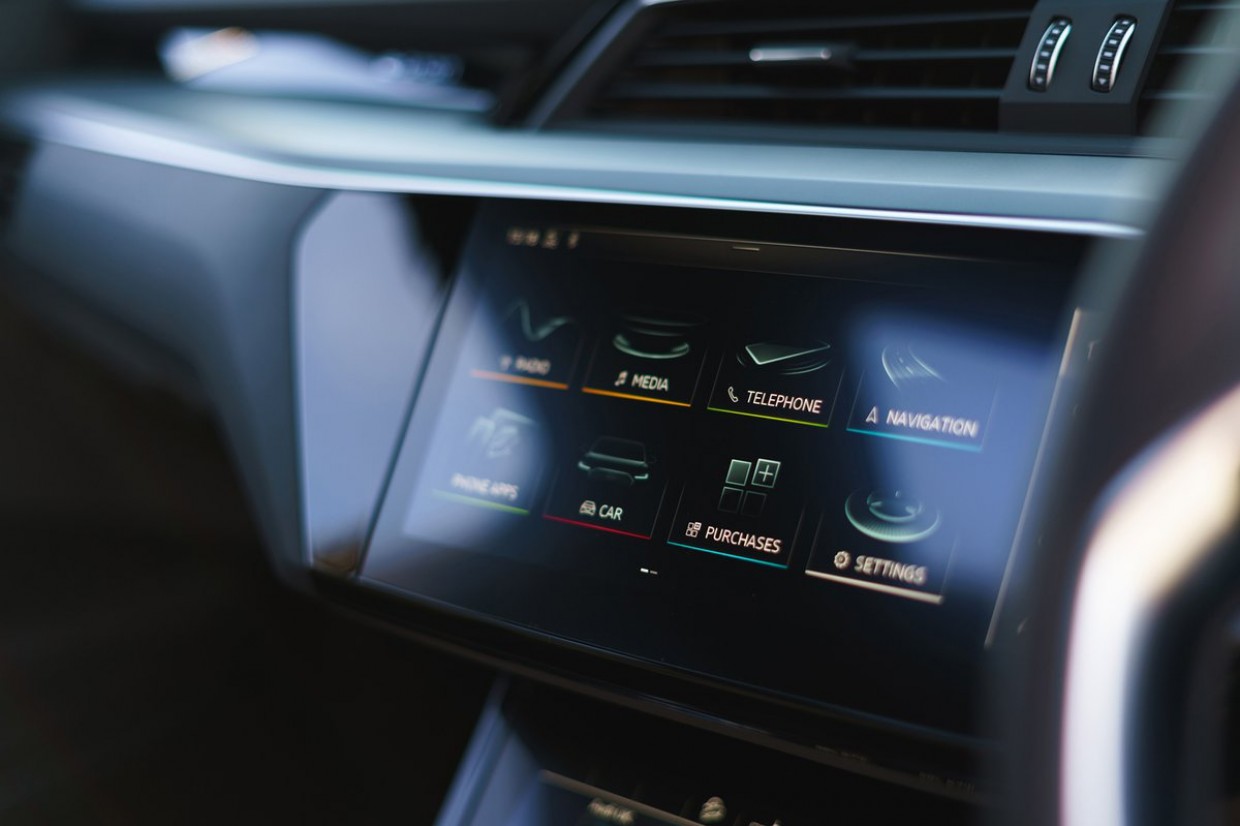 And while the exterior is a touch conservative, the e-tron’s interior is a work of art, with a crisp modern design and more TFT displays and glossy touch screens than a large branch of PC World. It oozes quality and upmarket appeal, with extensive use of rich and luxurious materials and bank vault quality fit and finish.

There are some really neat touches as well, such as the virtual door mirrors. In an effort to help the large SUV slip through the air more easily for greater efficiency, Audi has added the option of small cameras that are mounted on slim pods that sit where the mirrors are normally placed. These then sent images to small screens mounted on the insides of each front door just below the window. It takes a little while to get used to looking at them, but they do look really cool.

You also get two charging ports, one on each front wing. It’s a fairly simple addition, but one that will be appreciated by anyone (and that’s most of us) who have pulled up to a fuel pump only to discover the filler’s on the other side of the car.

What are the facts and stats?
Essentially there are two lithium ion battery sizes available for the e-tron and the Sportback, while all versions are quattro four-wheel drive, which means they get at least two electric motors - one driving the front wheels, the other the rears.

The smaller 71kWh battery is badged as a 50 and is only available on models with the ‘lowest’ 309bhp output motor. This gives a claimed range of 198 miles, which is someway short of a lot of premium rivals. 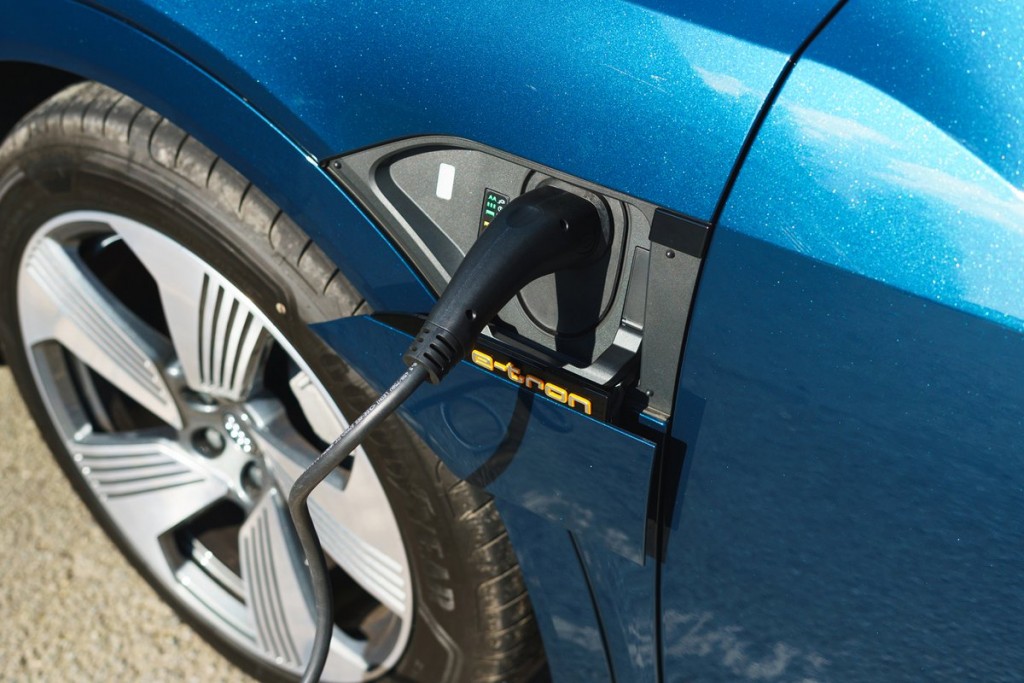 Better is the 402bhp 55 model that features a larger 95kWh battery that promises to carry you 254 miles between charges; a figure that’s closer to models such as the Mercedes EQC and Jaguar i-Pace, but still far from class-leading

You want bigger numbers? Well you’ll need the high performance e-tron S then, which boasts a grand total of three motors (two at the back and one at the front) that combine to deliver a stonking 496bhp. It uses the same 95kWh battery as the 55, but the enhanced performance reduces the range to 223 miles.

Still, while the e-tron’s range isn’t spectacular, you shouldn’t spend too much time charging, with the Audi having the facility to charge at 150kW using a rapid DC CCS charger. The 50, 55  and S versions can go from zero to 80 percent capacity in just 30 minutes, enough time to take a break from driving and grab a coffee.

Use a 7kW domestic wallbox and, of course, you’ll need a little longer, with the 50 requiring 10 hours for a full charge and the 55 and S a little longer at 14 hours. All three models have an 11kWh on board charger, meaning they can access faster AC charging at public 22kW sites or at homes with a three-phase electricity supply. 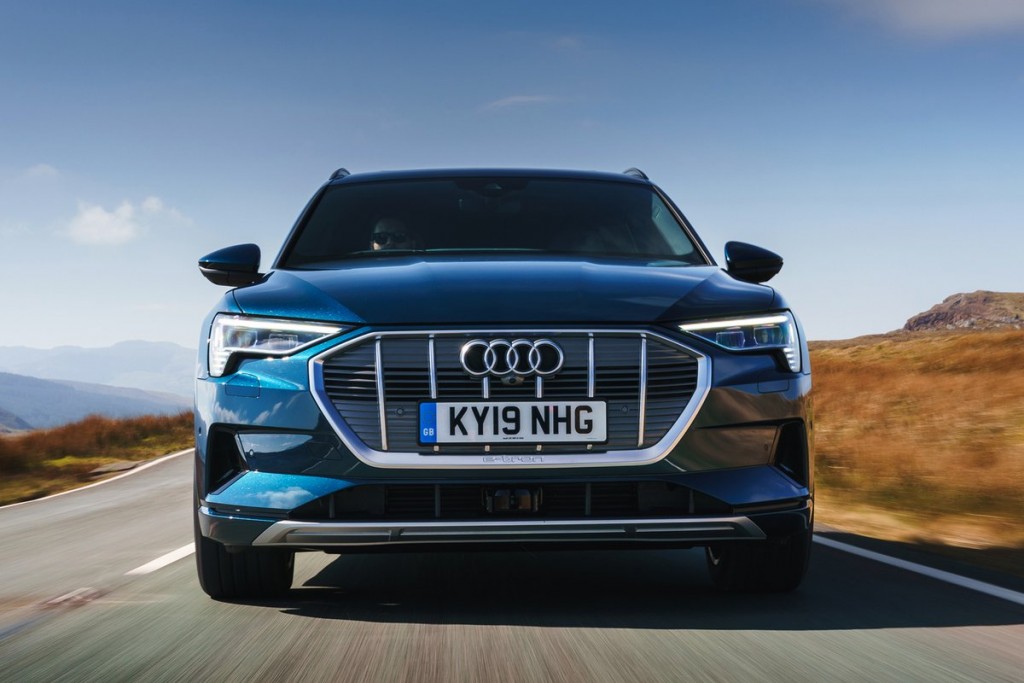 Take a look at the power figures and you’ll see that no e-tron is a slow coach. Even hardened performance car fans will be impressed by the strong surge of acceleration of the entry-level 50, which zaps from 0-62mph in a hardly shabby 6.8 seconds. Yet for the full face-contorting rocketship experience you’ll need the S, which will cover the same test in a hold-onto-your-hats 4.5 seconds.

Oh, and the Audi e-tron can tow quite a lot too. Most EVs aren’t rated to pull anything too hefty (an i-Pace is restricted to a trailer weight of 750kg) but the Audi is capable of hauling up to 1800kg, which makes it the perfect choice if you’re a caravanner looking to reduce your carbon footprint.

Tell me more about that interior
While the exterior of the interior is a little conservative, the interior is anything but. The design is bang-up-to-date and the fit and finish are exceptional. It’s also packed with high quality materials and is supremely comfortable, making it feel like a special space to spend time. 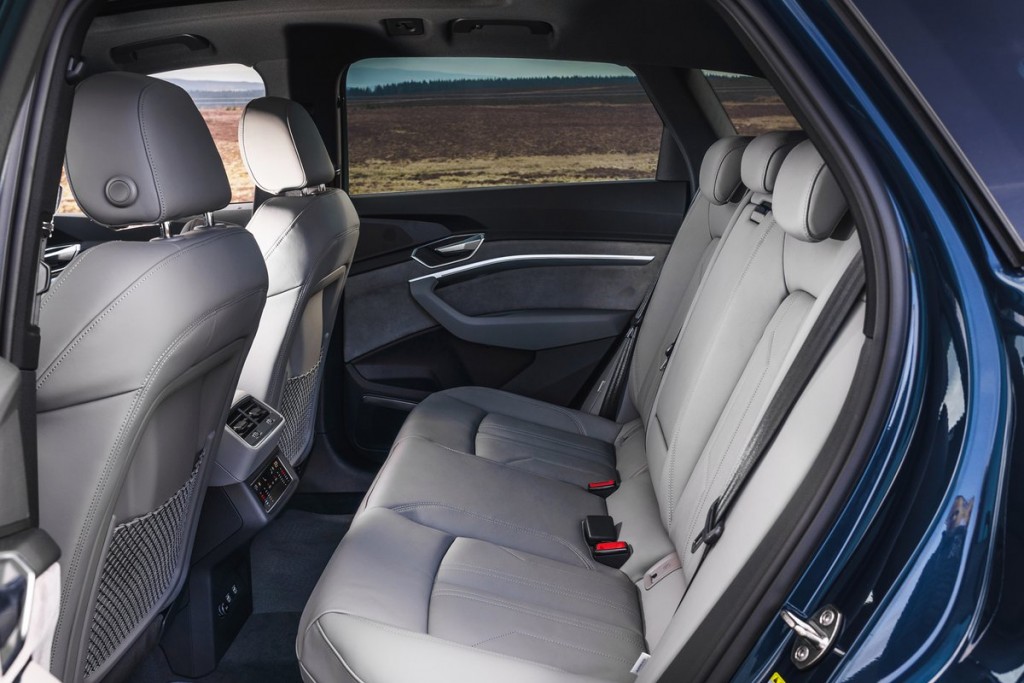 It’s fairly roomy too, with even more space for those in the back than a Jaguar i-Pace, while the 660-litre boot is bigger too. The Sportback version has slightly less space for luggage and taller back seat passengers will notice the reduction in headroom, but these are far from dealbreakers if you want the extra kerb appeal.

And of course, the Audi is lavishly equipped in all its guises, which include Technik, Sport, S Line, Black Edition and Vorsprung, plus the nutty fast S. You can pay a wallet-battering £105,000 for your E-tron, but that entry-level Technik will in all honestly have most of the kit you’ll ever need, including leather trim and keyless entry, plus a vast array of safety equipment that runs to autonomous emergency braking and lane departure warning. 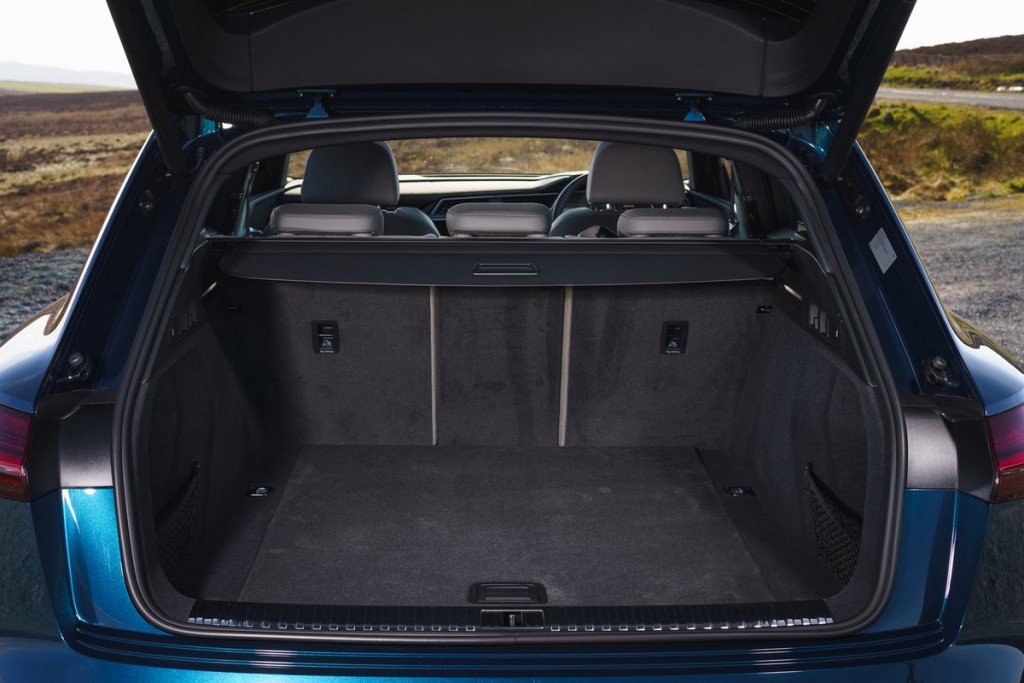 What’s the bad news?
Well, those touchscreens look slick but can be a touch fiddly to use on the move. They respond quickly and the layout is logical, but there’s so much going on that it’s hard stopping your eyes from leaving the road for longer than they should.

Keen drivers might not be as enamoured with e-tron as much as an I-Pace either. The Audi steers accurately and tackles bends with poise and composure, but it doesn’t feel as engaging or as light on its feet as the Jaguar. Of course it’s probably a bit much to expect sportscar agility from a big SUV, but it’s worth keeping in mind. 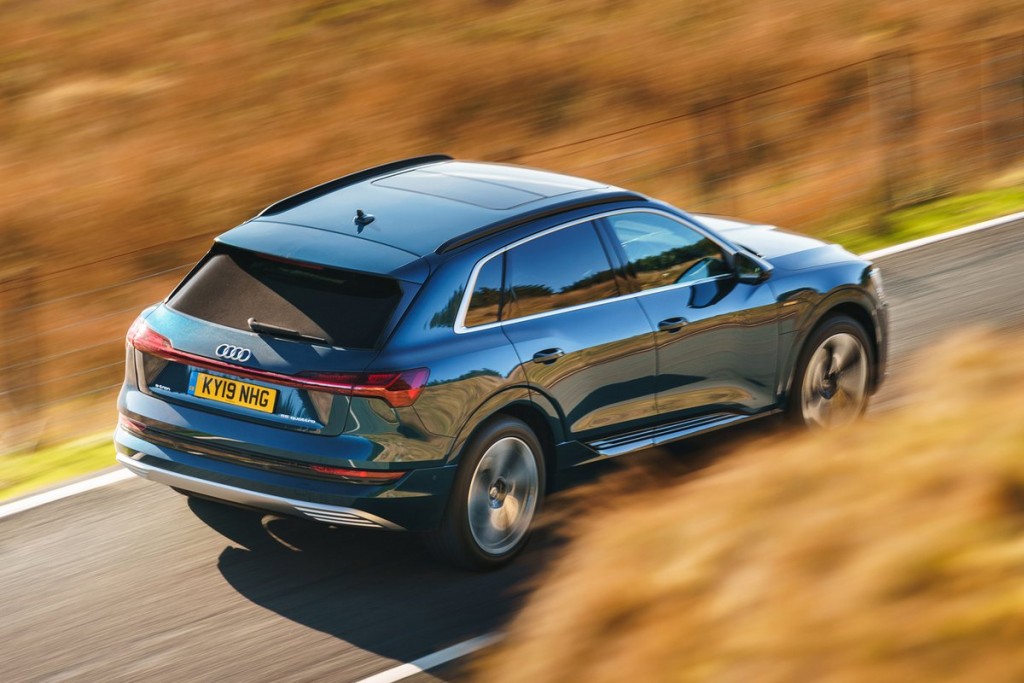 Any rivals I should consider before heading to my local Audi showroom?
Well, we’ve already mentioned the Jaguar I-Pace, which is more fun to drive and, to some eyes, even more stylish. There is only one battery and motor option, but this undercuts a similarly powered e-tron, plus it goes much further on a charge.

The Mercedes EQC is almost as comfy and luxurious as the Audi and has equally low key styling. It does provide more space inside, however, and a better range.

As a leftfield option there’s the Porsche Taycan Cross Turismo. It’s more coupe than SUV and nowhere near as spacious, but it’s faster and an absolute hoot to drive.

Verdict
Not the most exciting to look at or dynamic to drive, but the e-tron is one of the most comfortable and luxurious large EVs you can buy. It’s also packed with cool features and technology and available in a wide variety of guises. If only the range were a little better. 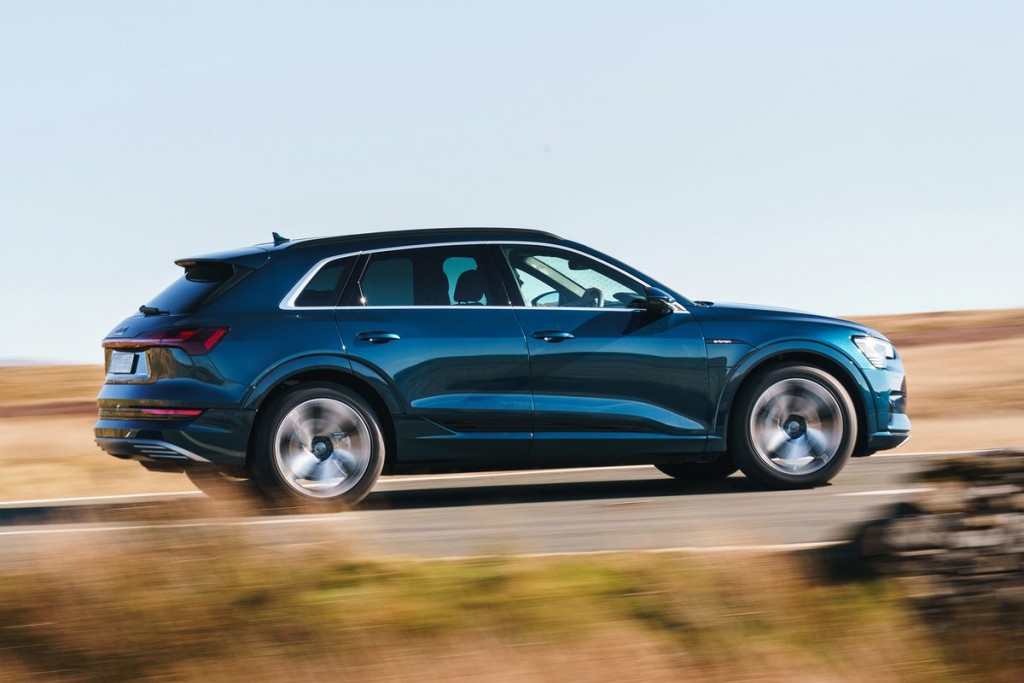