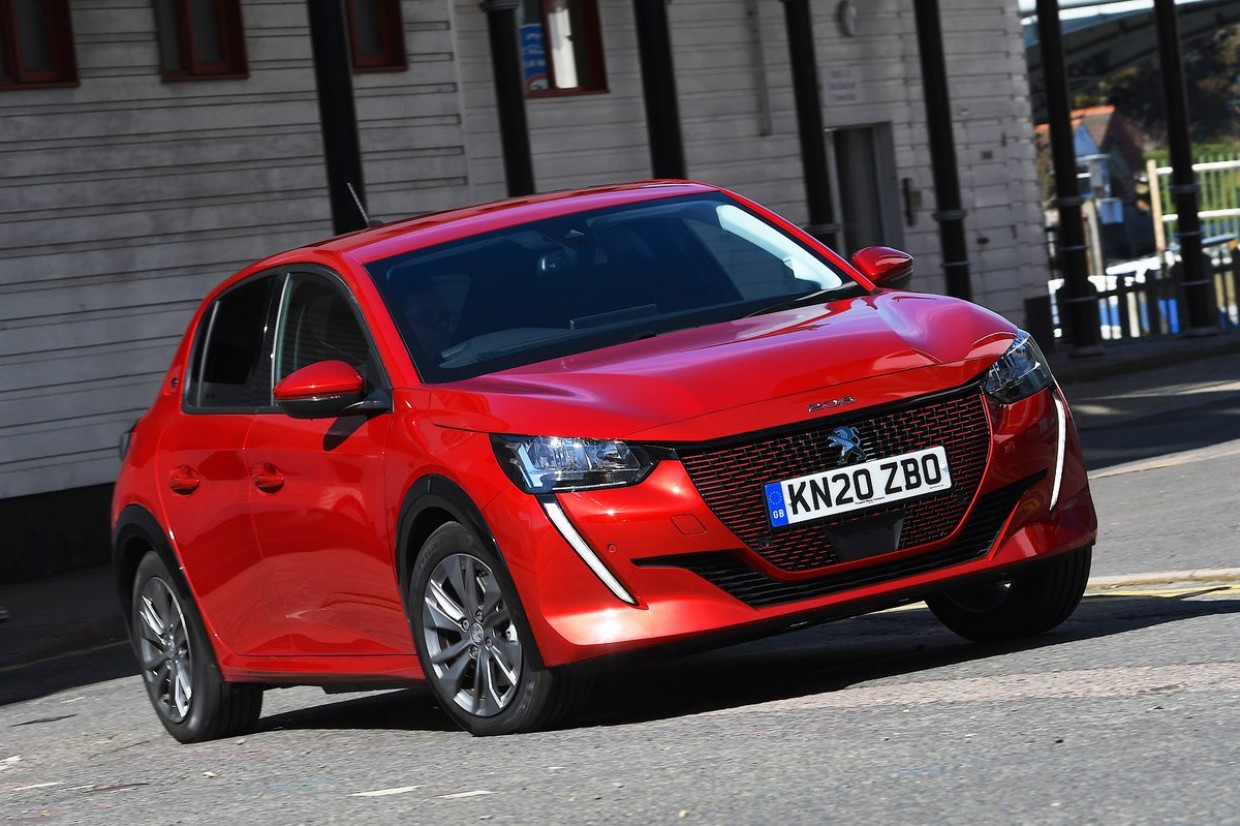 Sell it to me in a sentence….
The Peugeot e-208 is a small EV that majors on style and comfort, plus it’s good to drive and backed by a large battery that should banish range anxiety.

The e-208? Isn’t this based on an existing internal combustion model?
Yes, that’s right. It’s Peugeot’s first ever EV, but unlike rivals such as the Renault Zoe or Honda E, the Peugeot is also available in a traditional fossil fuelled form, with petrol and diesel options. 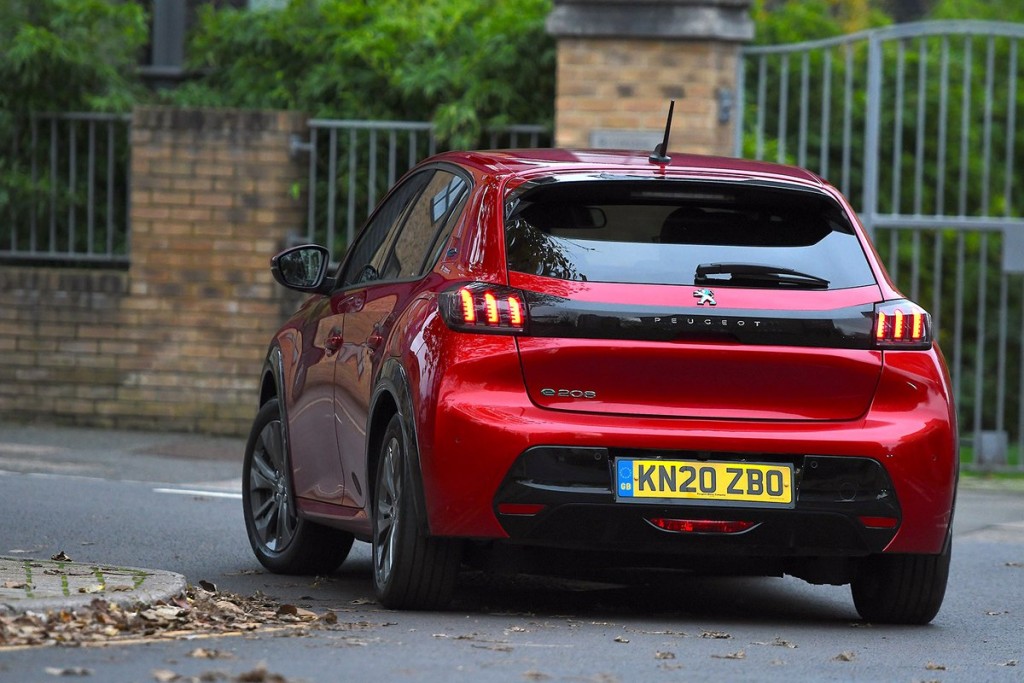 However, like the very closely related Vauxhall Corsa-e (they share the same structure, motor and battery, as does the larger Peugeot e-2008) it was designed from the outset to have electric running gear, so theoretically there are none of the compromises that you normally get in these situations, such as a reduced boot capacity in order to make way for a big battery.

As with the Vauxhall, a big part of the Peugeot’s appeal is that for most of the time it looks and feels like a normal small car. So just like the standard model, it’s stylish, easy to live with and boasts an interior that mixes a classy vibe with just enough space and practicality.

Okay, what are the standout features then?
Well, to start with, the 208 in all its forms is one of the more comfortable and easy-going superminis. It’s not maybe as fun to drive as some, but it's perfectly capable while any lack of driving sparkle is made up for by its soothing character. 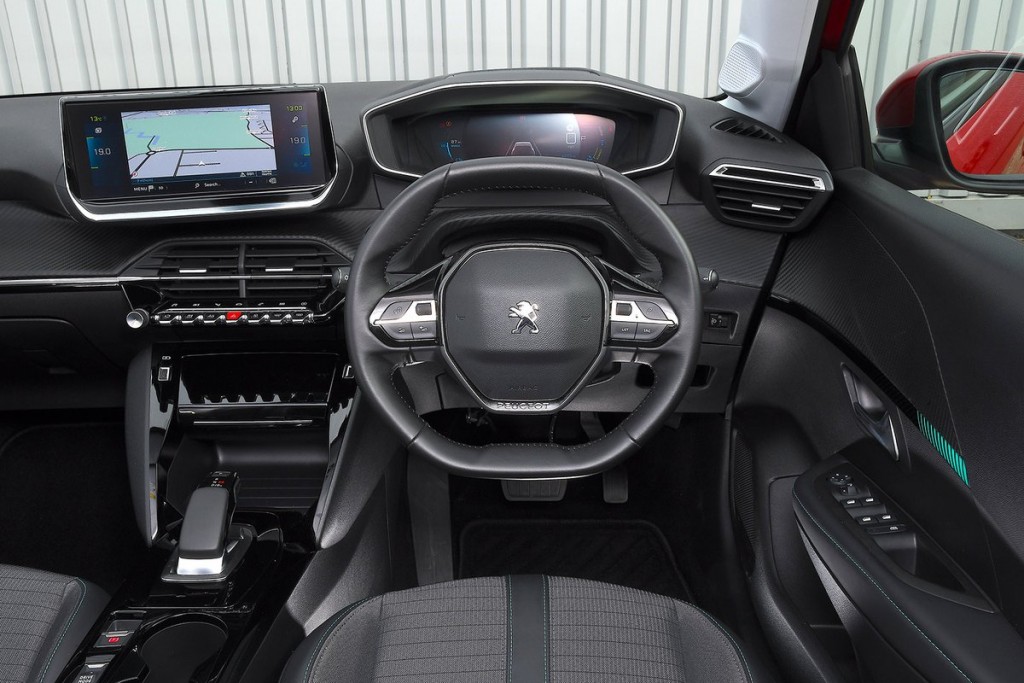 With its soft suspension and chic interior, the Peugeot tries to take the stress out of most journeys, so it’s no surprise it's so well suited to electric power. It’s electric motor delivers smooth and zippy acceleration, with no roaring or rattling from an engine to disturb the calm of the cabin.

The steering is light and accurate, which in combination with the compact dimensions makes it ideal for nipping down crowded city streets or tackling tight and twisty country roads. Surprisingly for a small car it’s even a hit on the motorway, where low noise levels and that cushioned ride allow to pull off a remarkably good impression of a bigger car.

Particularly pleasing for EV newcomers is that it doesn’t suffer from a fierce regenerative braking function, the car slowing smoothly as you lift off the accelerator and the motor sends electricity back to the battery. Better still, you can adjust the level of braking by simply flicking the lever in and out of this mode - too many rivals expect you to delve into infotainment sub menus. 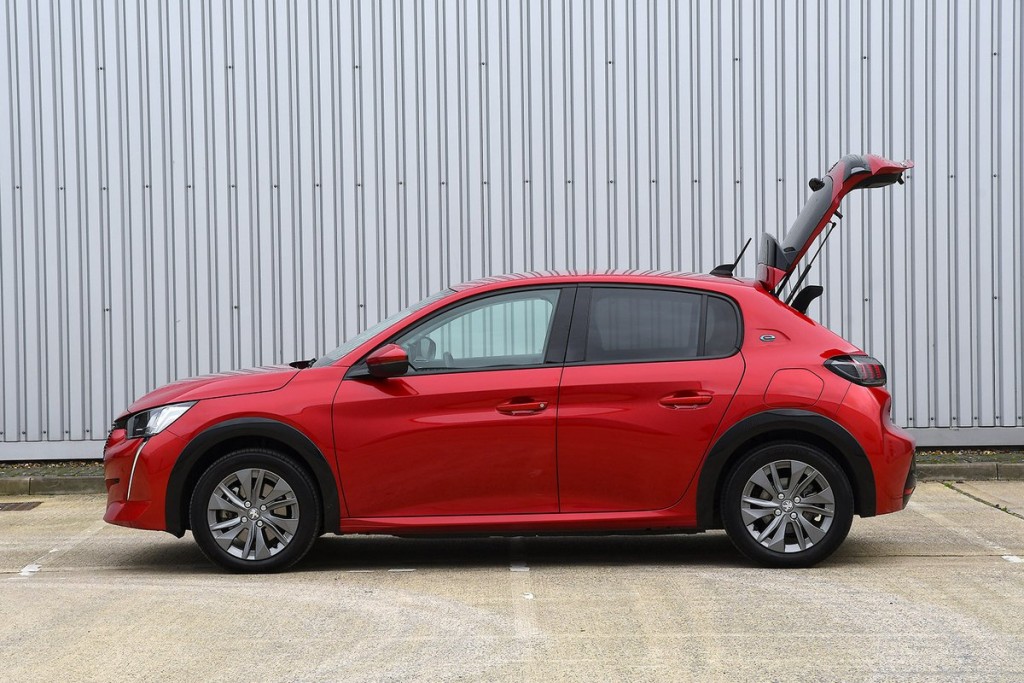 And what about the numbers?
Like closely related Vauxhall Corsa-e, the Peugeot is powered by a 50kWh lithium ion battery and has a 134bhp electric motor under its bonnet. Yet despite identical specifications, the e-208 claims 217 mile on a full charge, some eight miles more than the Vauxhall. Strange but true.

In real world terms our experience suggests you can expect 180 miles in usual driving conditions, dropping to around 160 miles when temperatures plummet and you’ve got the heating going full blast, or the weather’s turned nasty and you’ve got the lights and wipers working overtime.

Charging is straightforward, although the socket is in the same place on the rear wing as the petrol car’s fuel filler rather than a more convenient location behind the front grille as on, say, the Renault Zoe. If you use a 7kW domestic wallbox charger then a full charge will take approximately seven and a half hours. 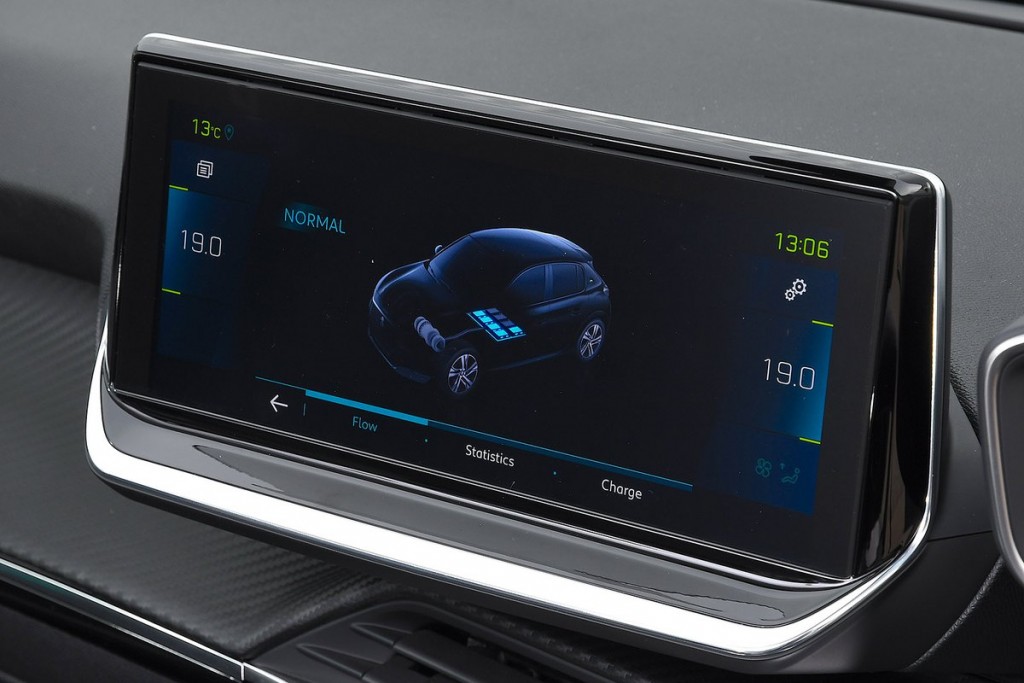 Better still, unlike many rivals that charge extra for rapid DC CCS charging capability, the e-208 gets it as standard. With an ability to charge at up to 100kW the Peugeot’s batteries can be topped-up from nothing to 80 percent in around half an hour.

Almost as impressive is the Peugeot’s performance prowess, its 134bhp motor zapping the e-208 from standstill to 62mph in a sprightly 8.1 seconds. In fact, it says a lot about the car’s snappy acceleration that the sportiest GT version is only available with this electric motor.

That’s the head satisfied, what about the heart?
Of course looks are entirely personal, but Peugeot has pulled a blinder with the styling - few small cars look as sophisticated and chic as the 208. And apart from some subtle badging at the rear and a colour coded front grille, the EV version looks just like the other models in the line-up, which for some will be a real boon. 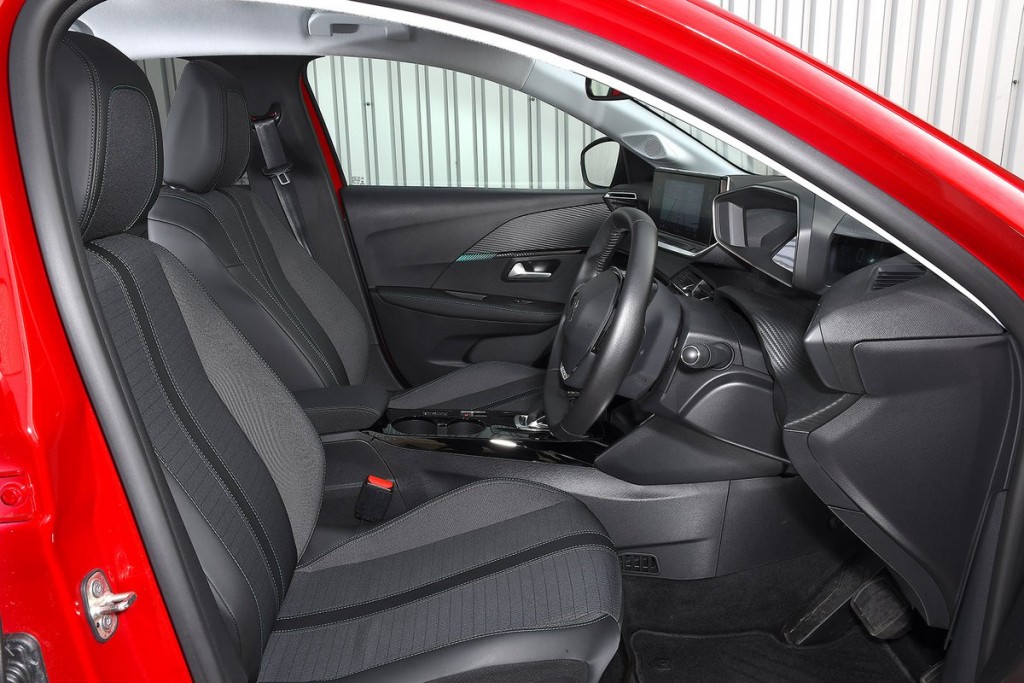 However, it’s inside that the Peugeot takes a step ahead of its rivals. Lavishly equipped and featuring plenty of high quality materials it has the look and feel of a proper luxury car, just one that’s been treated to shrink ray. There’s a slick looking touch screen infotainment, while set below are a row of metal finished toggle switches.

The low slung driving position is also comfy, while the firm’s i-Cockpit layout places the cool 3D digital instruments up high where you can see them - although some taller drivers might find they are obscured by the steering wheel. Overall though, this is a classy small car.

It needs to do more than look good though
True enough, and fortunately the Peugeot is reasonably practical as well. Taller passengers won’t be overjoyed at being asked to tackle a long journey in the back seats, where legroom in particular is a little tight, but it’s fine for short hops while kids will have few complaints, especially as there’s a pair of USB sockets to keep their devices alive. 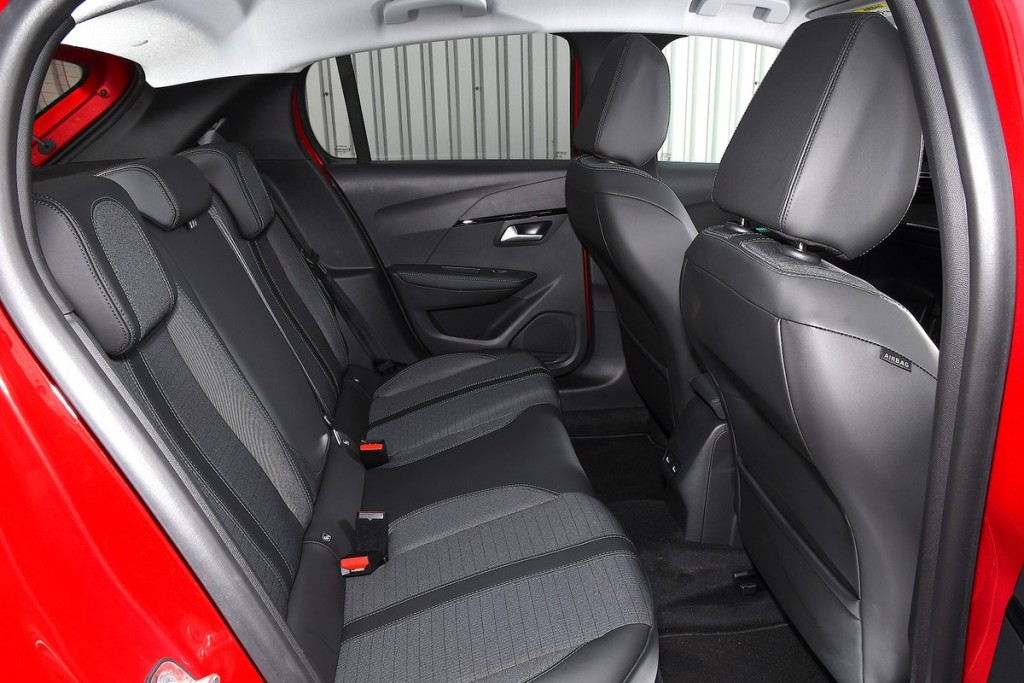 There’s also loads of handy storage for drinks bottles, wallets and the usual family clutter. Especially neat is the flip down smartphone docking station located in the centre console. And thanks to the fact it was designed from the outset as an EV, the Peugeot’s boot is as roomy as the standard car’s, which means it's pretty good by the standards of rivals.

Safety hasn’t been scrimped on either, with a five star EuroNCAP score the reward for fitting features such as autonomous emergency braking and lane keep assist, while big car features such as adaptive cruise control are an options box tick away.

Speaking of extras, you won’t really need to add many because the e-208 comes creaking under the weight of desirable gadgets and gizmos. Even the entry-level Active Premium is furnished with air-conditioning, rear parking sensors and LED headlamps. That said, we’d be tempted to splash a little extra cash on the Allure Premium, which adds those funky 3D instruments, full climate control and reversing camera. 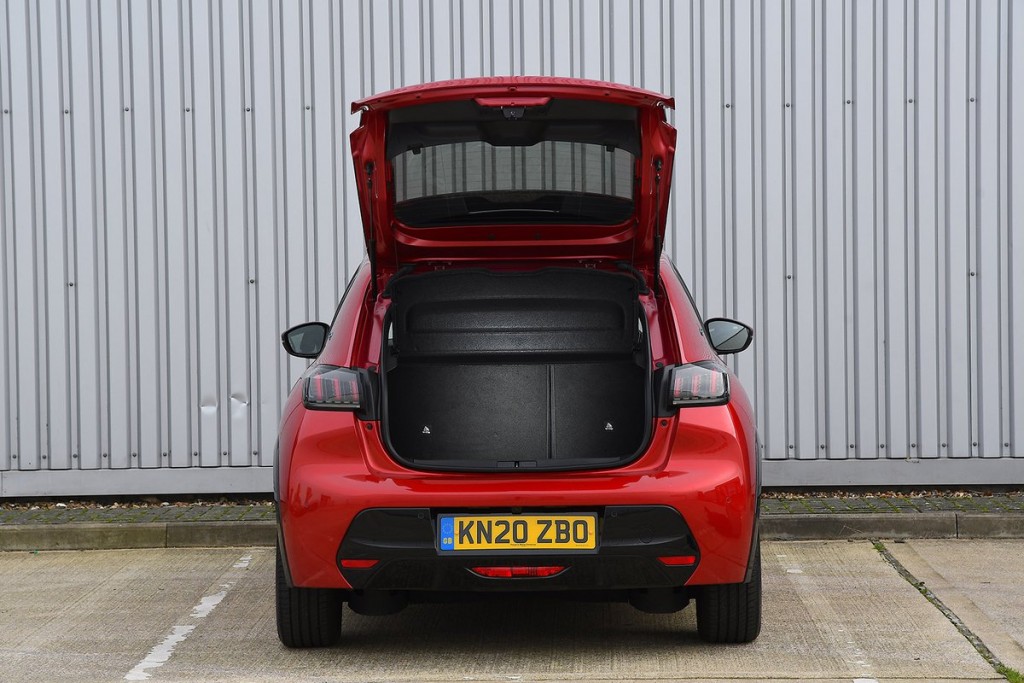 Stylish, quick and comfy, what’s the downside?
Well, as the old adage goes, you don’t get something for nothing in this world. While the Peugeot looks and feels a cut above many of its rivals, it’s priced to match.

It’s not wildly more expensive, but a starting price of £27,225 is a little higher than many. Most gallingly, it’s around £1,000 more than the virtually identical Vauxhall Corsa-e (which is also fractionally longer, wider and taller so you’re literally getting less for your cash). But then can you put a price on style?

Another niggle is the touch screen infotainment, which while snazzy looking (partcularly if you upgrade from the standard seven-inch unit to the larger 10-inch display) isn’t the fastest acting or the easiest to navigate. Matters are made doubly frustrating by the fact that it houses some everyday items such as the ventilation controls, meaning at least two taps of the screen and your eyes off the road just to adjust the temperature. 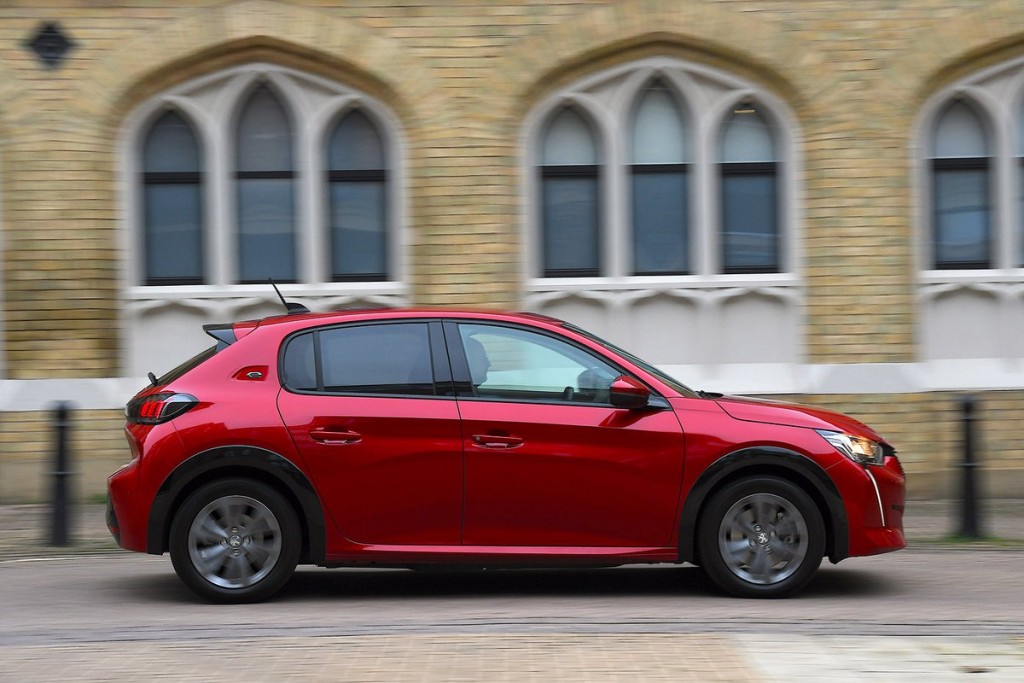 What other cars should I consider before handing over my cash?
Well, we’ve already discussed the closely related Vauxhall Corsa-e, which lacks the Peugeot’s style but compensates with a lower price.

The Renault Zoe is more practical and has a longer range, but can’t match the e-208’s comfort, while the MINI Electric is a riot to drive but has a cramped interior and unhelpfully short range.

If you want a similar style but need a little more space, then Peugeot’s e-2008 SUV is worth a look but is a little pricier. The MG ZS costs less and is even more spacious, but its range is a letdown and doesn’t isn’t as quiet and relaxing to drive.

Verdict
You’ll pay a premium for it, but the head-turning Peugeot rewards with its style and sophistication. It’s thoughtfully designed interior is also classy and comfortable, while its strong range and snappy performance make it simple to live with and relaxing to drive. 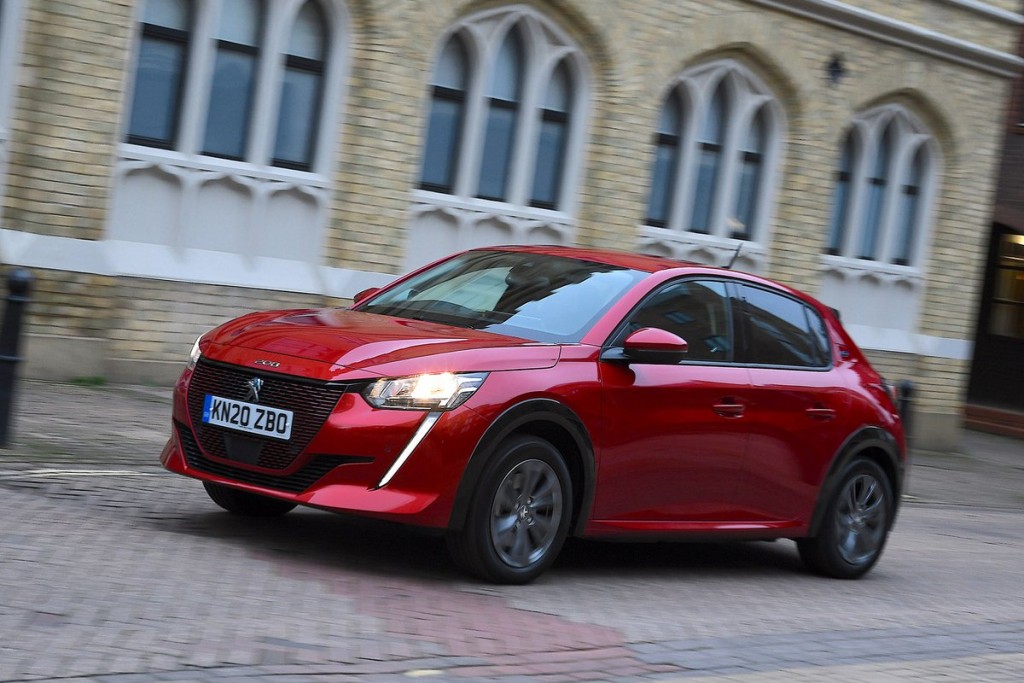