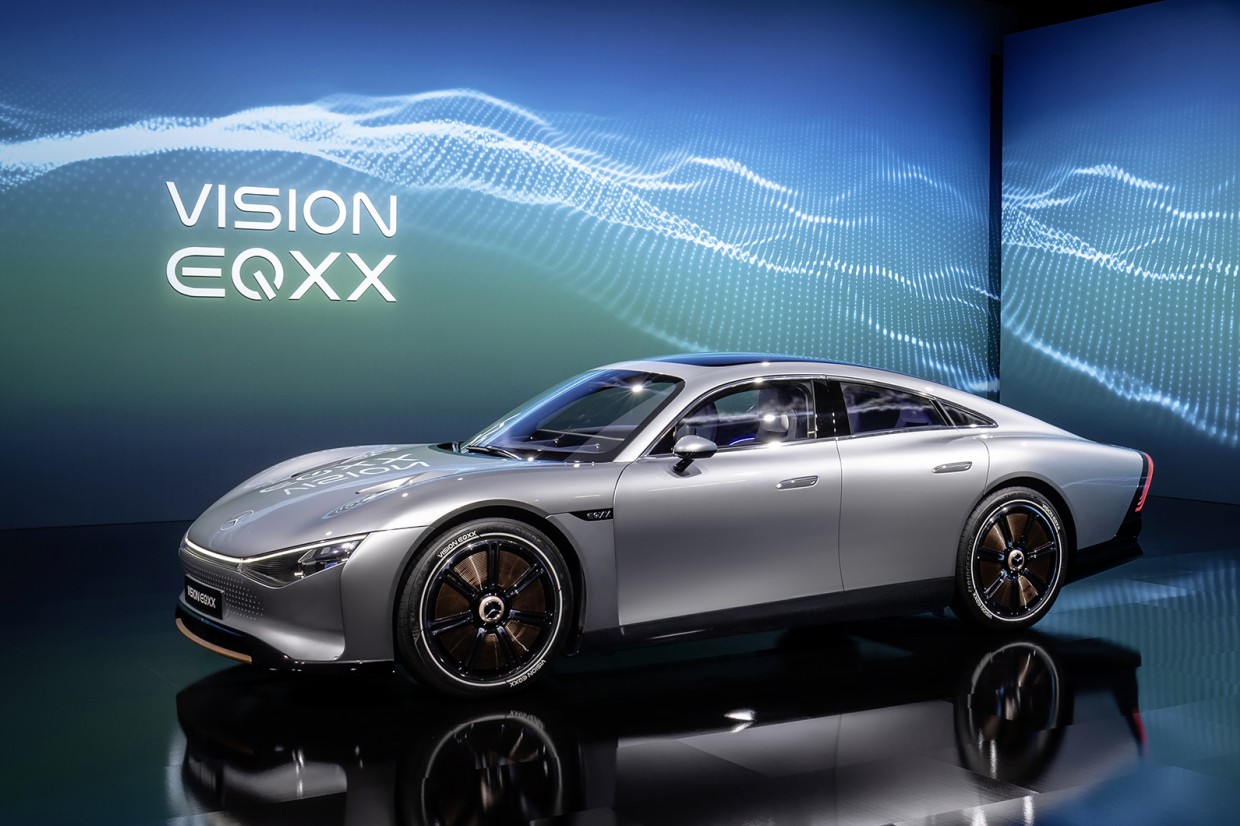 This is the new Mercedes-Benz Vision EQXX, a bold tech-laden concept car intended to make range anxiety a thing of the past. That's because it's been designed with a focus on being ultra-efficient, with a claimed range of more than 620 miles (or 1000km, if you prefer nice round numbers in metric form).

The new machine has been revealed to coincide with the CES technology show in Las Vegas, and is Mercedes-Benz’s attempt to showcase how it will use new technology, hardware, software and ideas to reinvent electric cars by making them more efficient and sustainable. The result is what Mercedes claims to be a ‘road trip-friendly’ stylish luxury saloon.

Just how efficient is the Mercedes EQXX?

The Vision EQXX is roughly similar in size to the firm's C-Class saloon, making it slightly smaller than the recently launched EQE. But this concept isn't really about showcasing a car, but new technology: it was developed in just 18 months, with the main focus put on maximising its energy consumption.

Mercedes claims it can achieve less than 6.2 miles per kWh, which is around double what the current flagship Mercedes EQS can achieve. The firm claims that in combustion-engined terms, that would be equivalent to around 282mpg. Meanwhile, the 620-mile range is 167 miles more than the EQS.

For further comparison, 10kWh of energy – enough to power the Vision EQXX for 62 miles –  would allow you to run a tumble dryer for three hours, or watch a 50in LED TV for 100 hours.

So what’s the secret to the Vision EQXX’s efficiency? Well, Mercedes says the secret was “ripping up the automotive engineering rule book”, using “the latest digital technology, the agility of a start-up and the speed of Formula 1.” That basically means it uses fancy new software, some new development techniques and has input from Mercedes-AMG High Performance Powertrains, which builds the hybrid V6 units that power Lewis Hamilton.

Beneath the bold claims, the Vision EQXX does offer some real innovations. Its efficiency has been achieved through a combination of ultra-efficient aerodynamics – Mercedes claims a drag rating of below 0.18Cd, which is really good: it’s more efficient than the EQS (0.20Cd) and an American football (0.18Cd), but not as efficient as a penguin (0.05Cd).

The shape of the car reflects its focus on aerodynamics, but there are plenty of little details that add to the efficiency - for example, the rear track is 50mm narrower than the front to shape the airflow. There’s also an ‘air curtain’ generated by the front bumper, aero-boosting wheel covers on the 20in tyres and automatically opening cooling shutters. 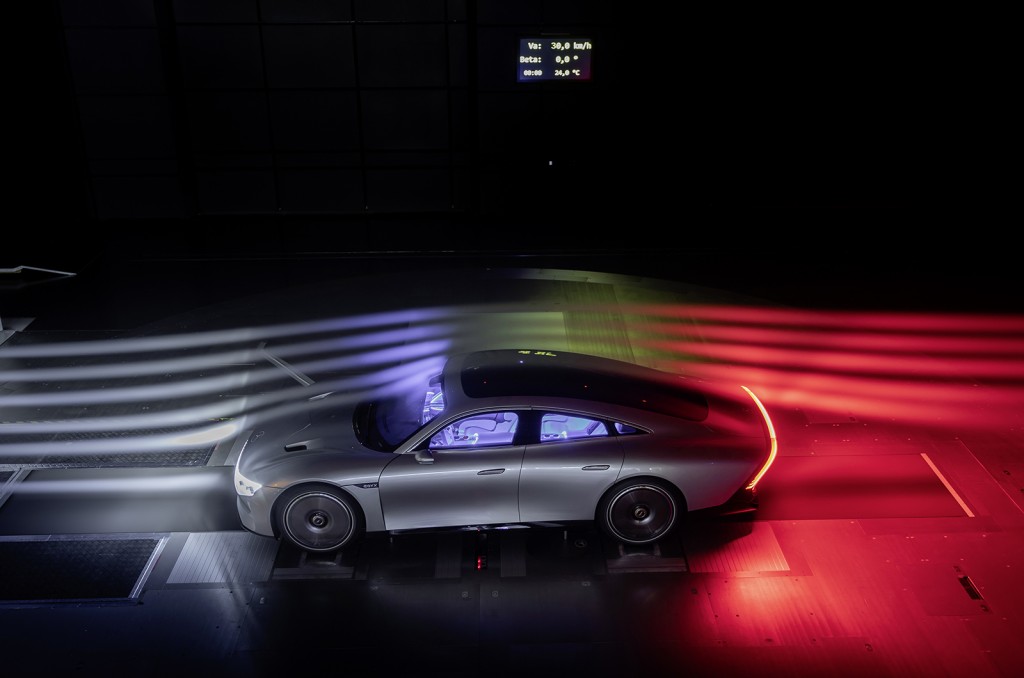 So what electric wizardry powers this thing?

The Vision EQXX features a newly development electric drive unit that combined the motor, transmission and power electronics, and which Mercedes claims offers more than 95% efficiency in terms of delivering power from the battery to the wheels. How efficient is 95% efficient? Well, Mercedes claims a combustion-engined car offers around 30% efficiency, while an average long-distance human runner averages 50% efficiency.

There’s also a bespoke lithium ion battery, which is just under 100kWh in size but is half the size and 30% lighter than the 107.8kWh battery in the EQS. The pack weights around 495kg, which is key to the Vision EQXX weighing just 1750kg. Key to increasing the energy density of the battery, according to Mercedes, is a new chemistry in the anodes, featuring higher silicon content. It also uses ‘active cell balancing’, meaning the car draws the energy evenly from each cell while in use, extending its efficiency.

The electronics unit is taken from the forthcoming Mercedes-AMG Project One (a hypercar that’s effectively fitted with the hybrid powertrain from an F1 car). The system works at a voltage of more than 900 volts, and has a max power output of around 150kW (201bhp). While that might pale in comparison to many EVs, Mercedes says that it has been optimised for super-efficient running. 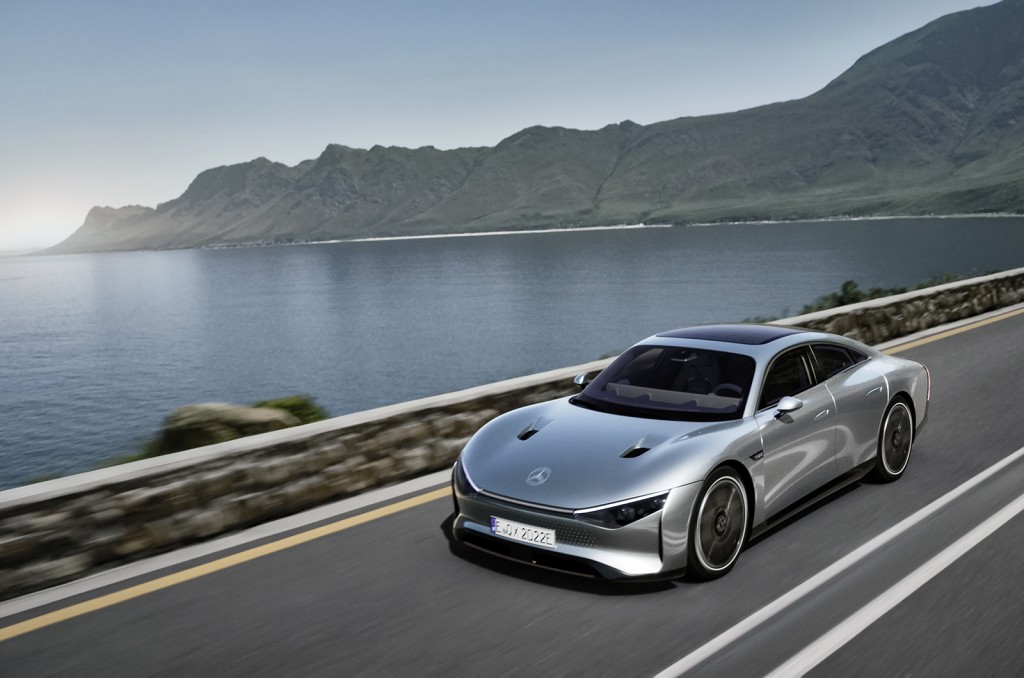 There’s a posh ‘cooling-on-demand’ thermal management system that minimises the amount of waste heat produced through a variety of aerodynamic shutters, coolant vales and water pumps. A cooling plate on the floor of the vehicle also uses the air flowing along the underside of the car. All told, Mercedes says the system adds around 12.5 miles of range.

The machine also features 117 roof-mounted solar panels that can add up to 15 miles of range, lightweight brake discs and ultra-low rolling resistance tyres. Lots of the materials used in the cars interior and recycled or plant-based, while some parts have been 3D printed to minimise the material required.

The body of the car is made using a series of innovative techniques, including a one-piece rear floor structure that was designed entirely digitally and which the firm has called BINEQXX. As well as being a good Scrabble score, the aluminium piece is designed to minimise weight, by using material only where required by the car’s function. The rest of the shell makes use of ultra-high strength steel, while the doors are made from blended carbon and glass fibre. 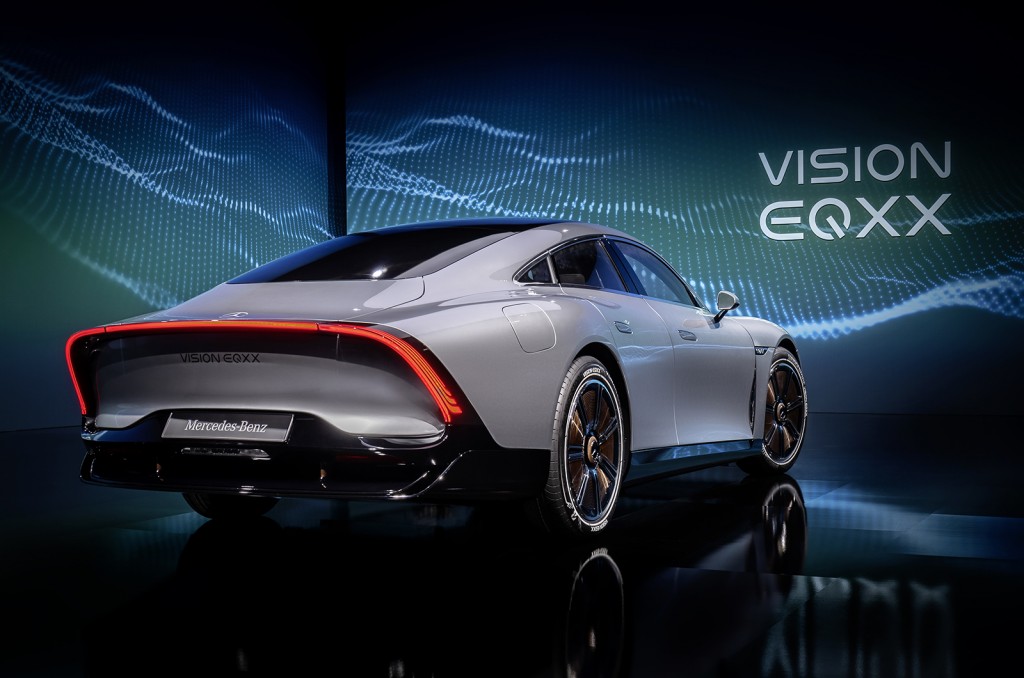 Inside, the Vision EQXX is designed to showcase what Mercedes calls ‘beautiful simplicity’. That means it’s quite stripped back but still a bit posh, what with this being a Mercedes and all. That means there’s a number of innovative materials (door pulls made from a vegan silk-like fabric called AMsilk Biosteel, bamboo fibre carpets, and a vegan leather made from mushroom roots called Mylo). Or, and there’s also a material called Deserttex, which is made from cactus fibres. Don’t worry, they removed the prickles.

Another key development on the Vision EQXX is the software, which Mercedes claims offers ’neuromorphic computing’. That means the hardware runs ‘spiking’ neural networks, with the information split into various spikes, allowing the car to run smaller packets of data as needed - hugely reducing energy consumption.

The car also offers a new user interface for the driver, and Mercedes claims it makes for a ‘non-judgemental road trip sidekick’. It’s all built into a huge 47.5in 8K seamless digital display that runs the entire length of the dashboard. A special avatar appears on that dashboard to help build the driver, offering services such as realtime 3D navigation. It also make extensive use of voice control to adjust things like the infotainment. 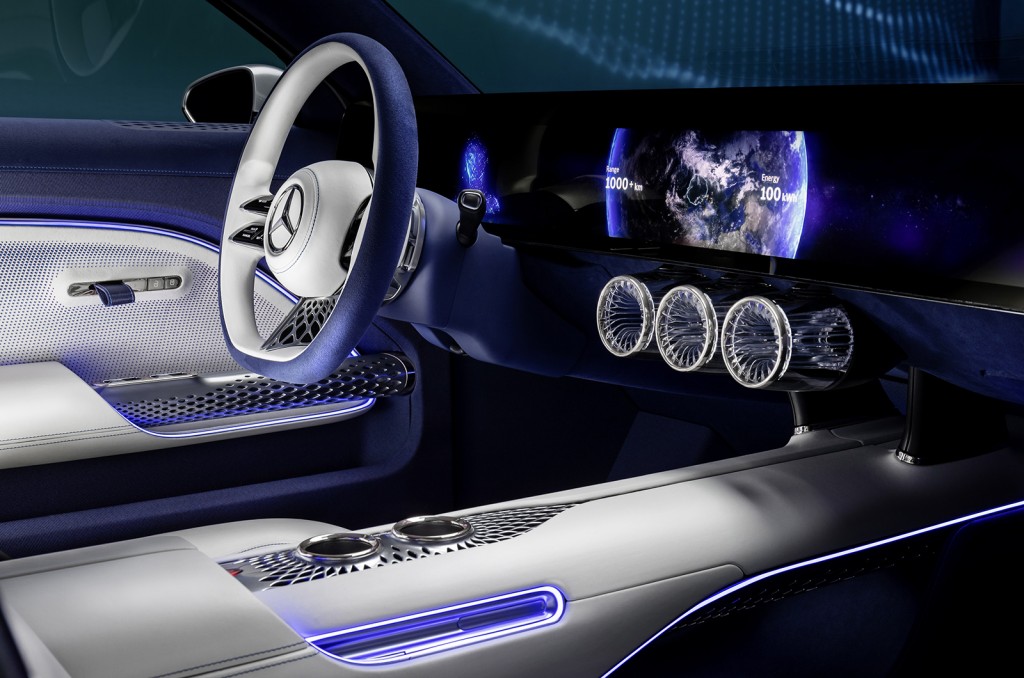 The bad news is that the Mercedes Vision EQXX purely a concept car and you can’t go out and buy it. The good news is that we understand it previews a production car that Mercedes is aiming to launch in 2024.

Given Mercedes bosses have already said an electric version of the C-Class is likely to arrive around then, the fact that the Vision EQXX is roughly similar in size to the C-Class make it very likely you're looking at a preview of the EQC executive saloon. 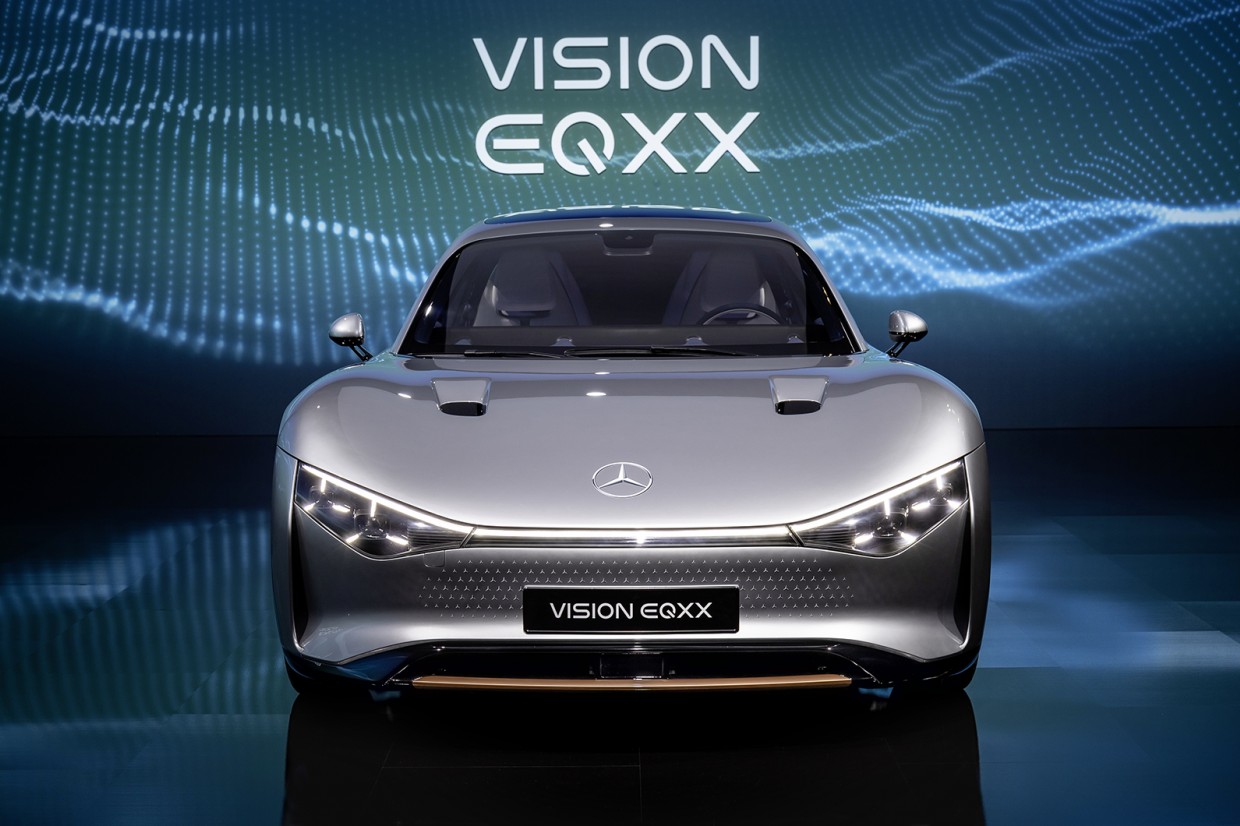 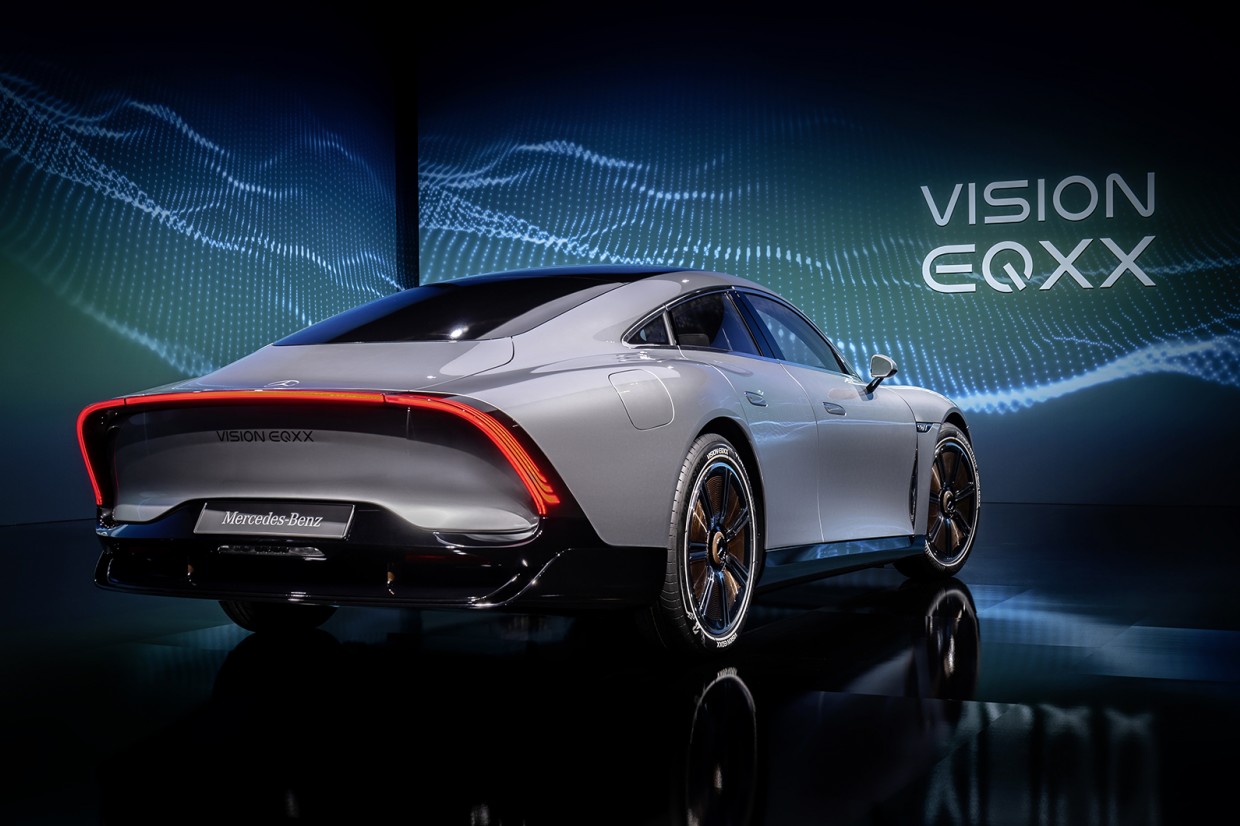 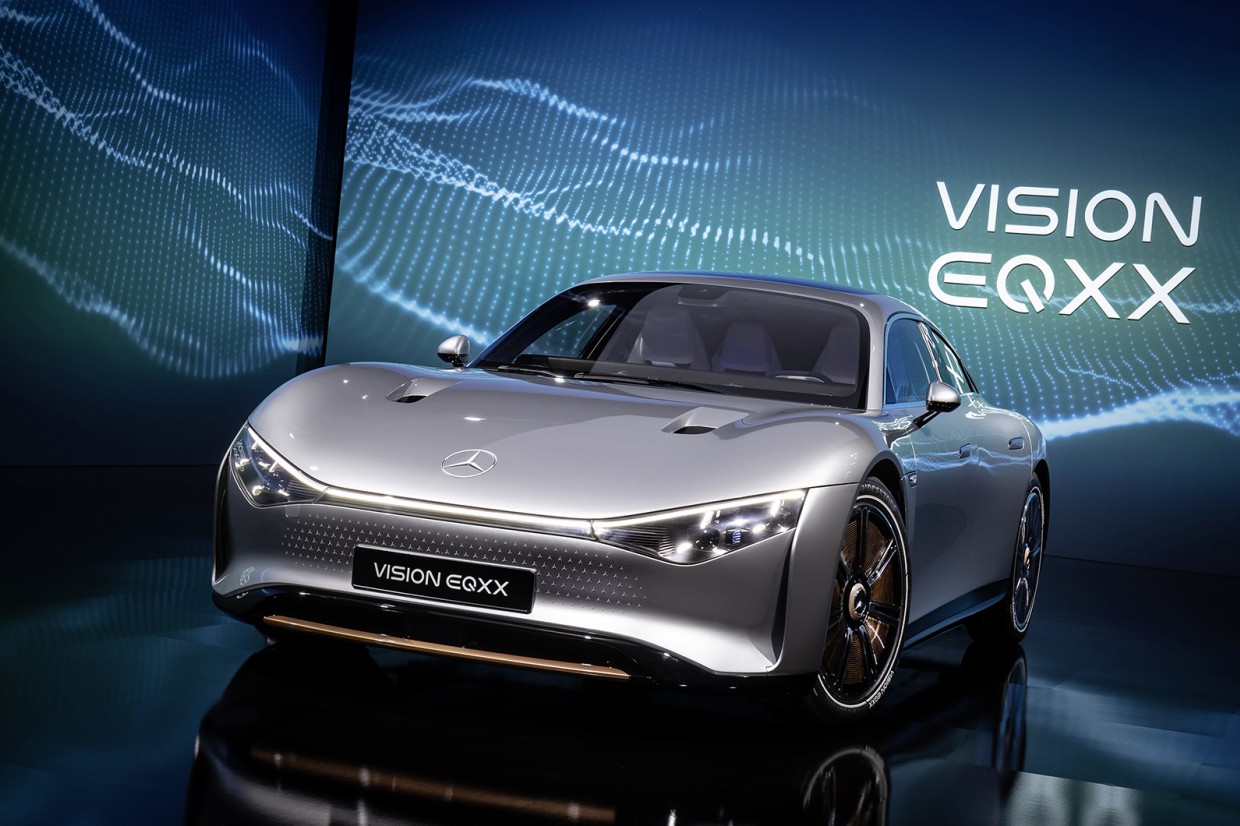 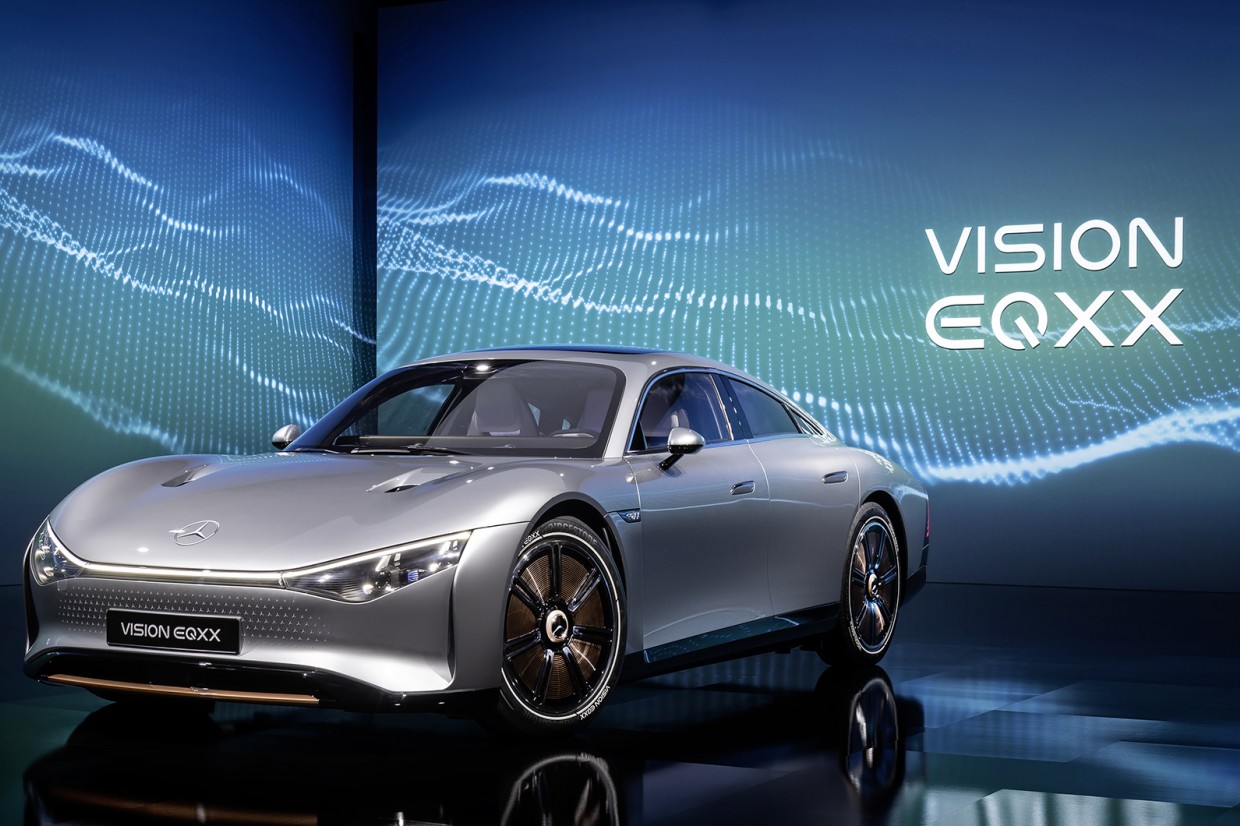 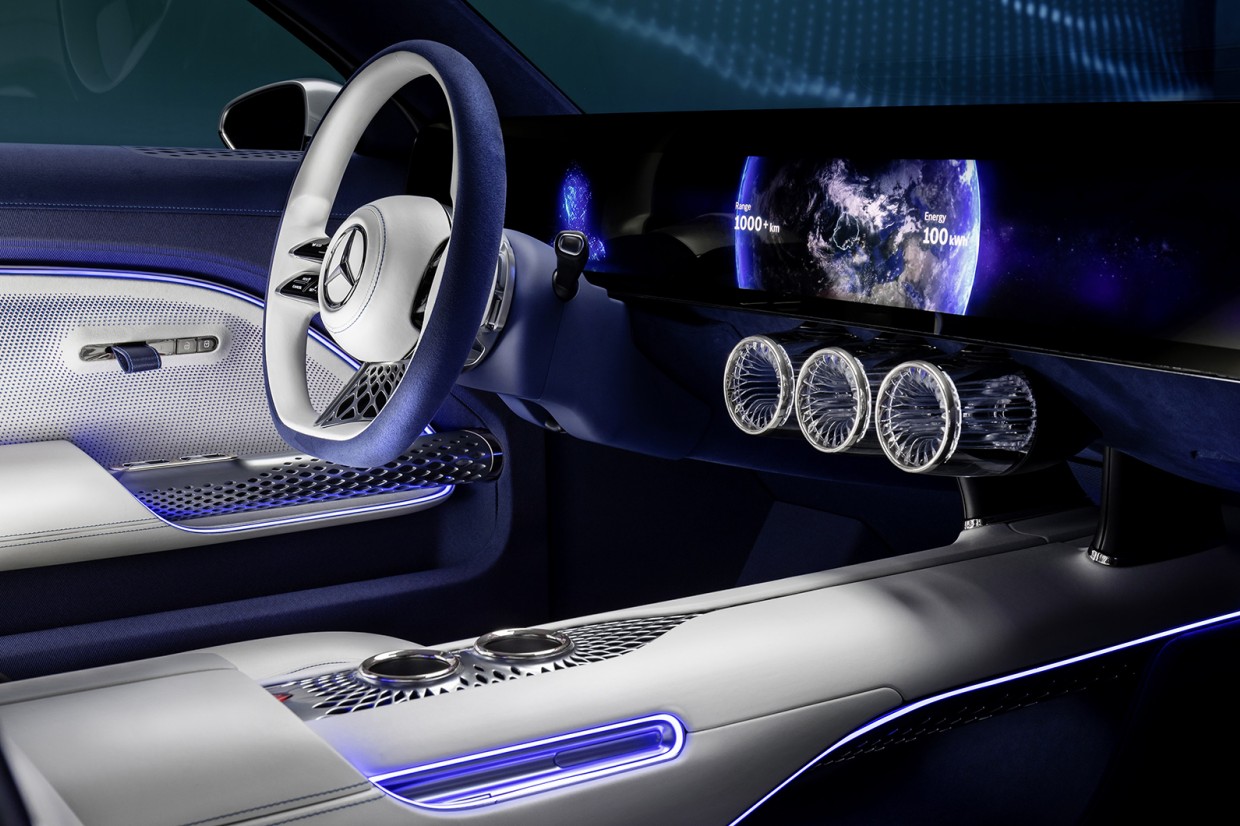 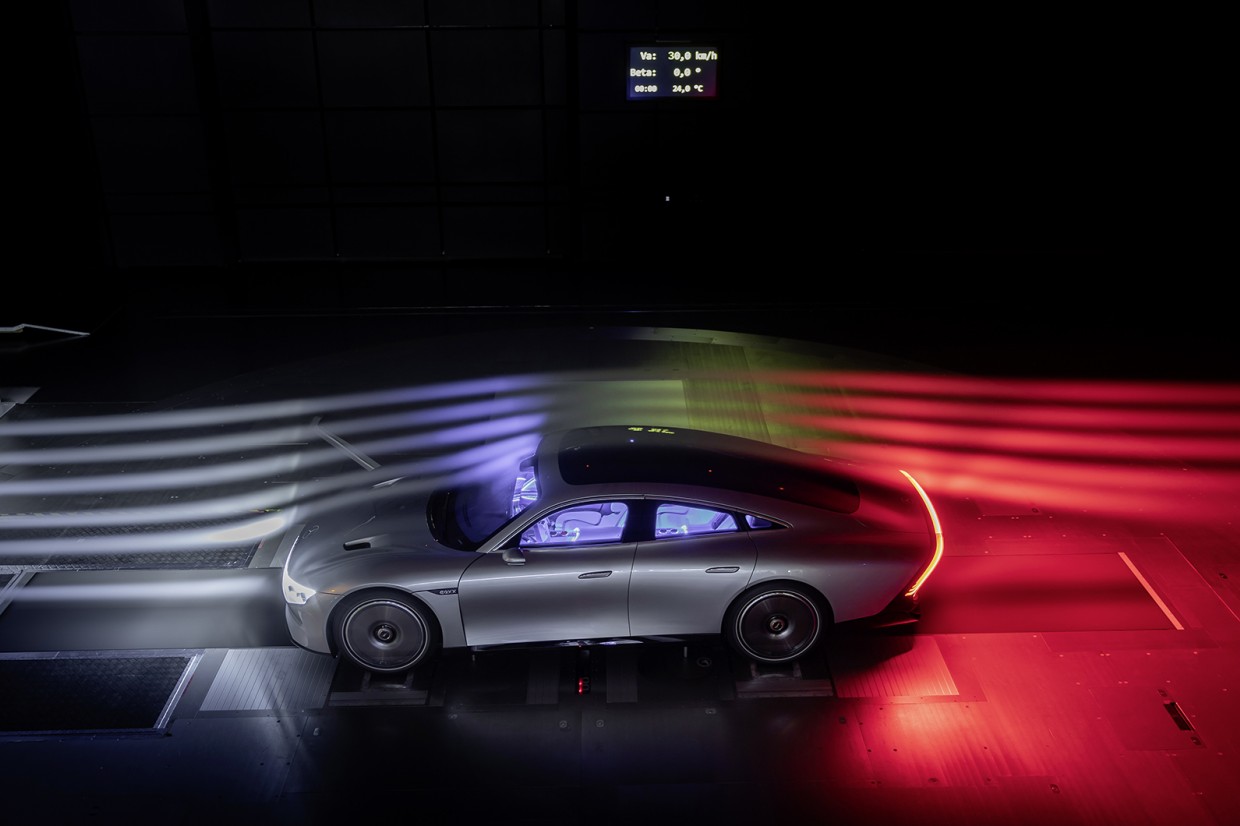 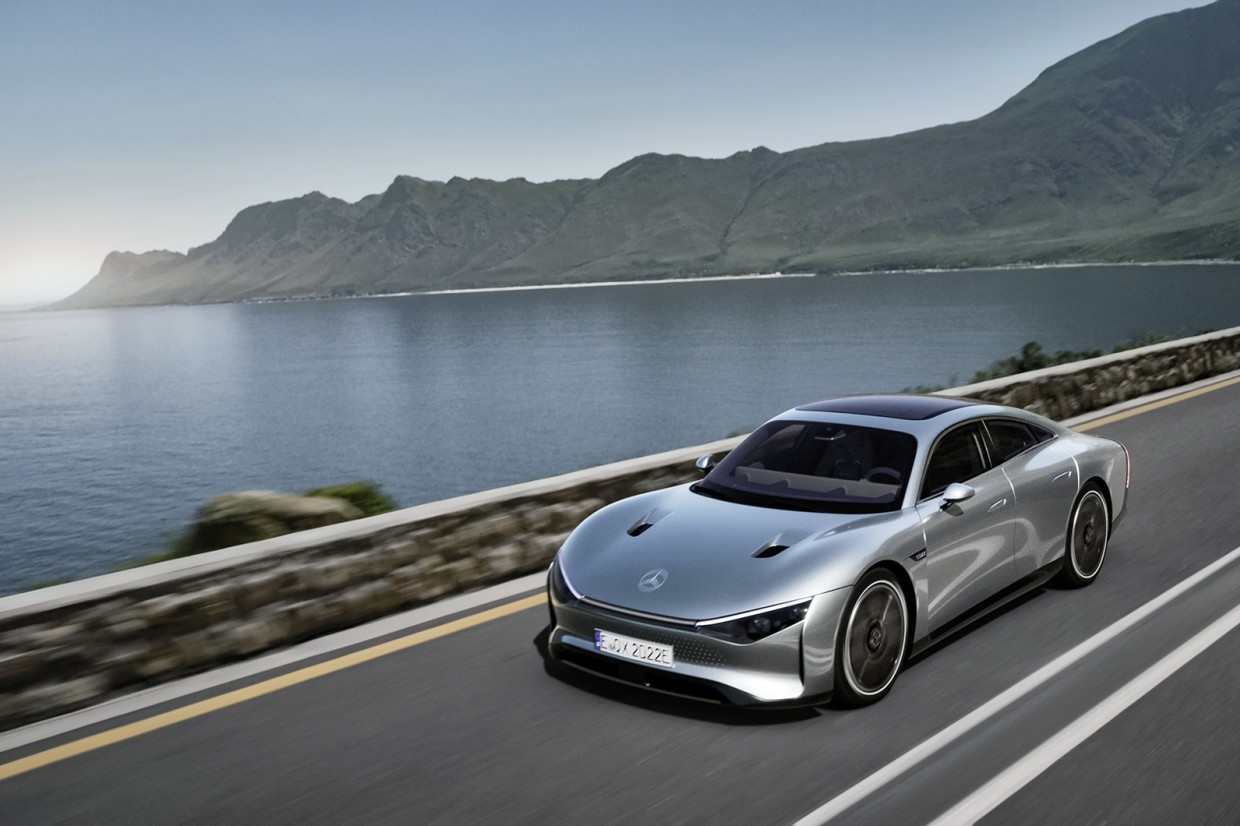