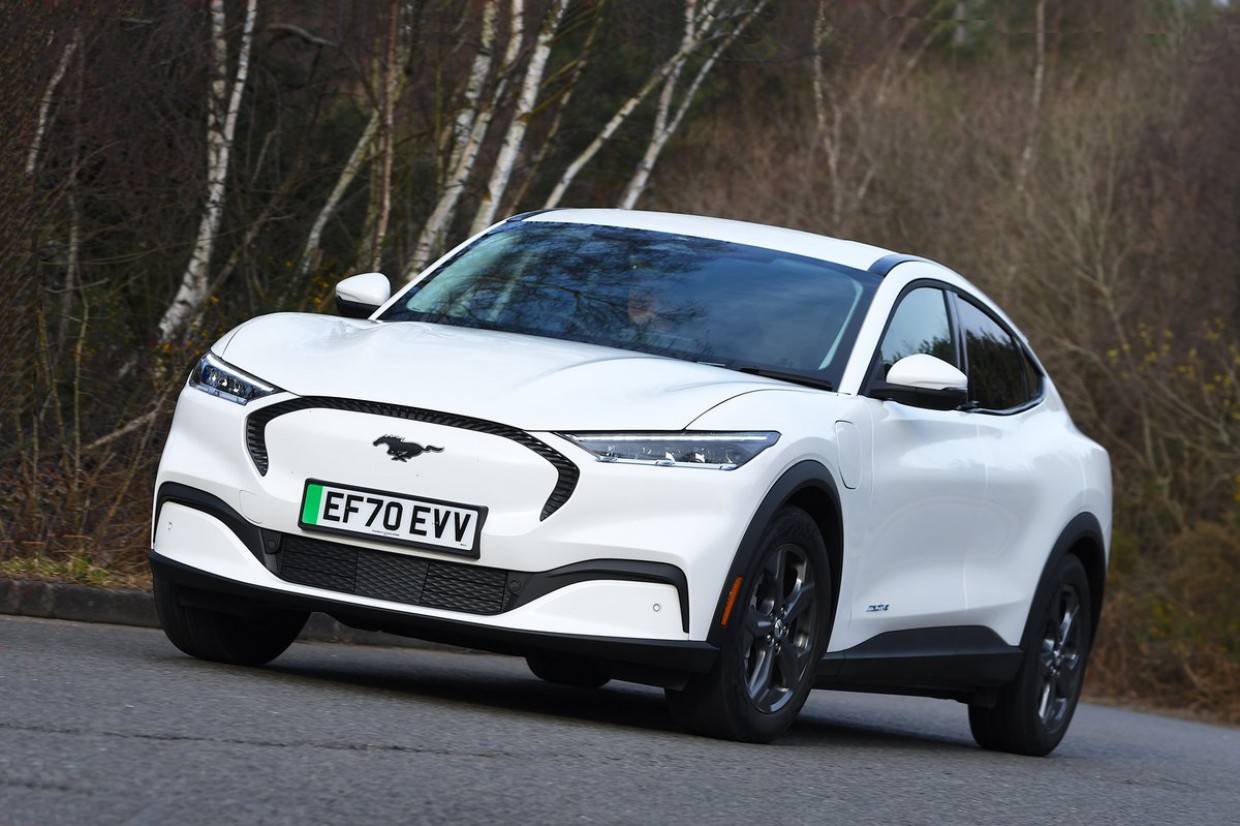 Sell it to me in a sentence
Throw away everything you thought you knew about Mustangs being low riding, rear-drive, gas-guzzling V8 muscle cars: this new all-electric Mustang Mach E has taken the iconic name but thrown almost everything else out of the window.

Is that a good thing?
It depends on your point-of-view, but there’s no question that the Mustang Mach-E is a worthy standard-bearer for a new generation, offering  practicality, a well equipped interior, and a driving range that rivals the range-topping Tesla Model 3. 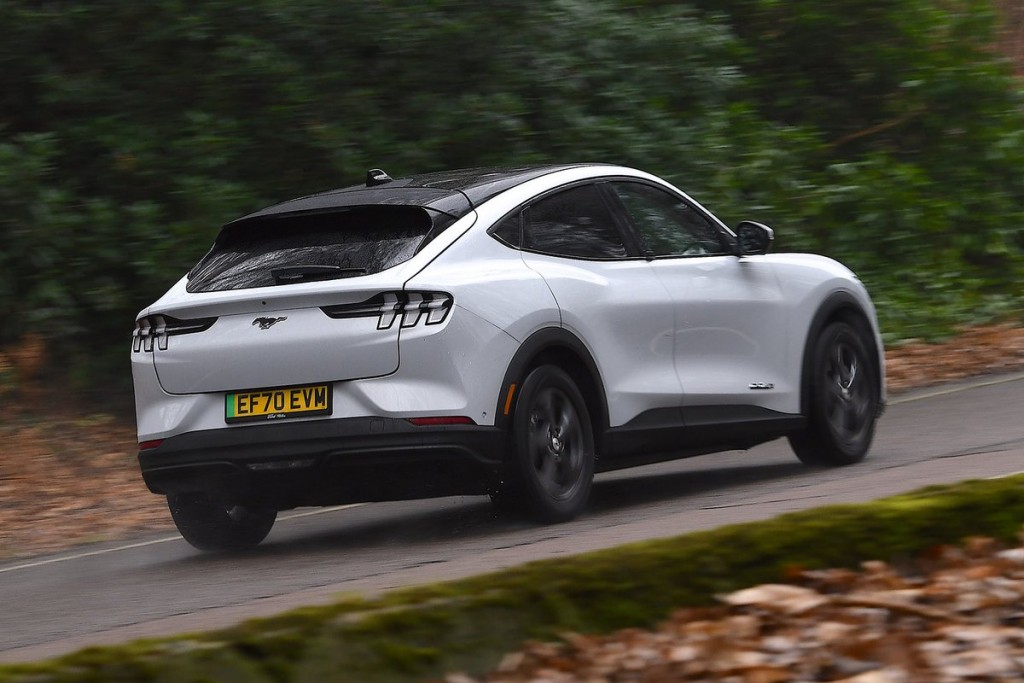 It might have swapped the laddish appeal of the original for an altogether worthier mission, but it does so with panache, rivalling everything from the Kia e-Niro and VW ID4 in terms of practicality, and even giving the much pricier Audi e-tron, Jaguar I-Pace and Mercedes EQC pause for thought.

You mentioned the Tesla Model 3. Can a Ford really rival a Tesla?
You’d better believe it. In range terms at least, spec the Ford to its maximum potential and it gives the Tesla a bloody nose.

The entry-level rear-wheel-wheel drive Mustang Mach-E Standard Range is equipped with a 70kWh battery and has an official range of 273 miles - six more than the entry-level Tesla. That drops to 248 miles if you go for the all-wheel-drive variant though. 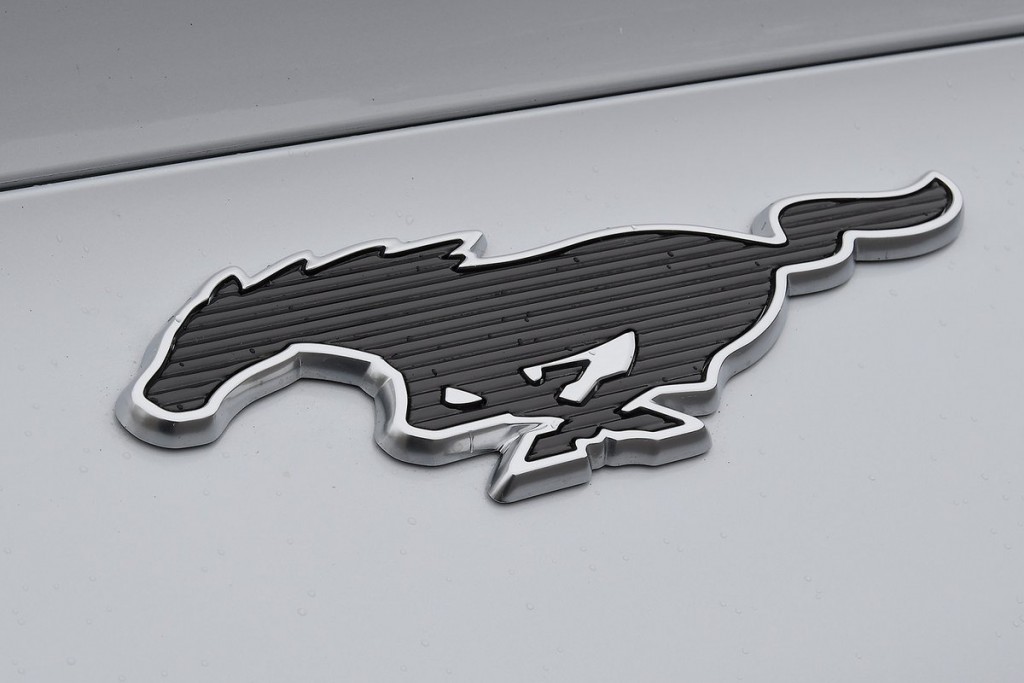 Above the Standard Range is the Extended Range, which has a 88kWh battery and is also available with either rear or all-wheel-drive. The rear-drive model has an official range of 379 miles, 19 miles more than the Tesla Model 3 Long Range, with the all-wheel-drive version achieving a slightly shorter range of 335 miles.

Using a 7kW home wallbox charger, you can replenish the smaller battery in around 11 hours, although a 10-80% recharge is possible in as little as 38 minutes with a faster charger.

The larger battery can be charged at higher speeds, allowing you to go from 10-80% in 45 minutes. A 7kW home charging device will replenish the battery in around 14 hours.

So the Mustang has a great battery. What about the rest of it?
To drive, the Mustang Mach-E is like many larger electric vehicles: rapid in a straight line, but compromised in the corners as a result of all those batteries.

As a result, turn into a corner going quickly and the Mach-E will lean rather more than a driver of a petrol or diesel-engined car might expect. It’s something you get used to, and compensate for, but it does highlight that it is a little short of the driving-led fun of cars bearing the original nameplate.
Ride comfort is also compromised by the somewhat bouncy suspension setup, making the car feel unstable when you connect with a bump or pothole. The GT model is more settled thanks to adaptive suspension, but this comes at a price premium. 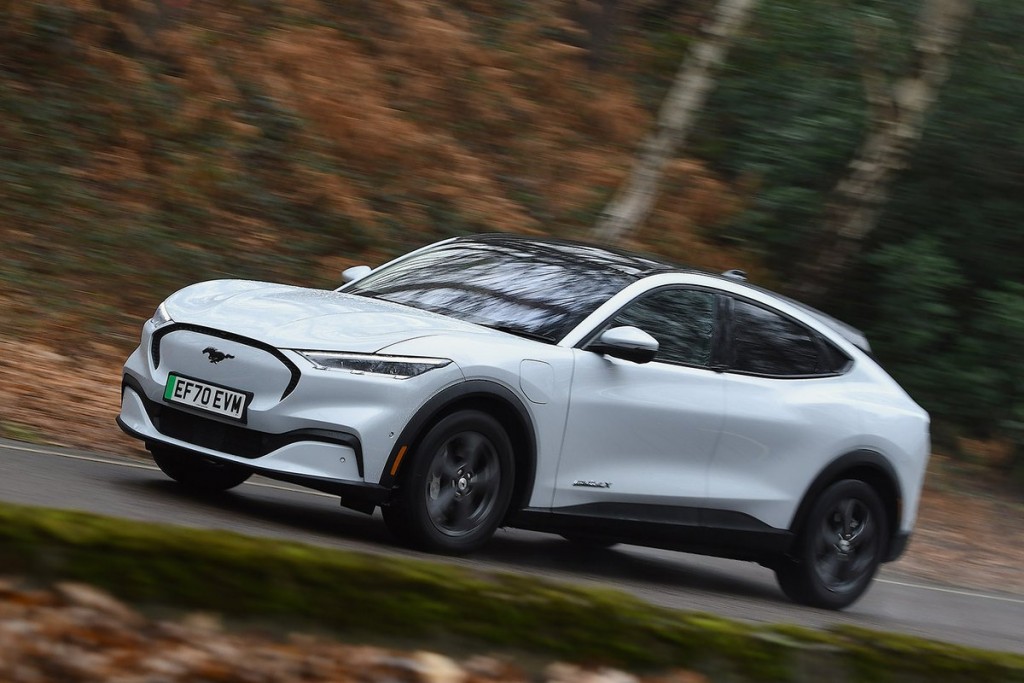 We also have to urge you to check you’re comfortable with the size of the windscreen pillars when you take a test drive. While you do get used to them, they are pretty chunky, which does hamper visibility. The rear windscreen is also quite thin, making it quite difficult to see what's behind you (although rear parking sensors and rear camera are standard).

On the plus side, the steering is pretty responsive and telegraphs what’s going on through the wheels to the driver with decent accuracy.

Overall, then, the Mustang is satisfactory if not inspiring to drive.

Ah. Sounds a bit lukewarm. What’s it like inside?
By Ford’s - decent - standards, the interior of the Mustang Mach-E is another step on again.  In keeping with the minimalist theme of most EVs, the Mach-E does away with physical buttons, opting instead for a crisp, 15.5 inch touchscreen infotainment system. 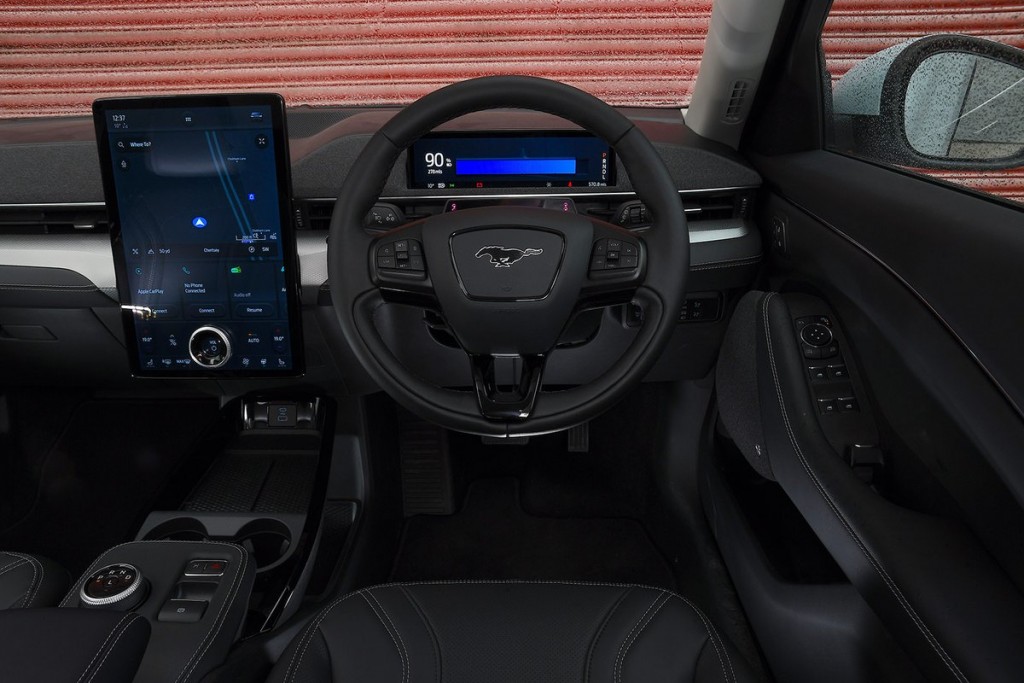 It comes with some useful features, such as Apple CarPlay, Android Auto and satellite navigation. The graphics are clear and all the features are well laid out, making it easy to use - and see - when driving. You also get wireless phone charging as standard, as well as front and rear parking sensors and even a rear parking camera, even on the entry-level model. 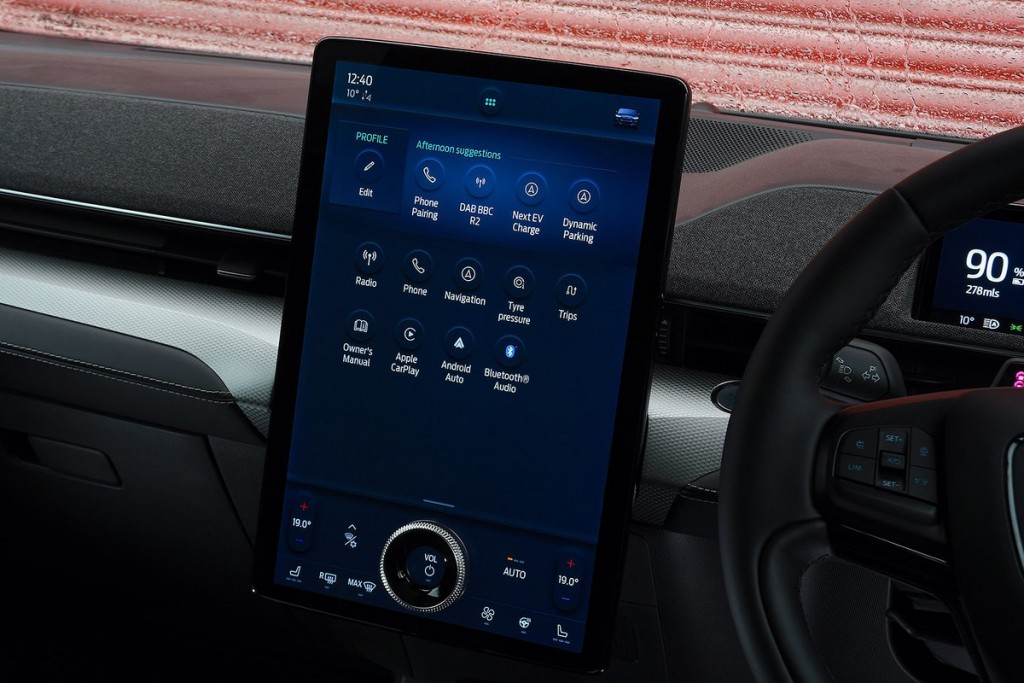 Perhaps one of the more interesting quirks on the Mach-E is the 10.2 inch digital driver’s display. This shallow screen sits neatly behind the steering wheel and is more McLaren than Mustang in appearance. It works brilliantly, putting all the key information in your eyeline, and adds a certain high-tech sparkle to proceedings.

The Mach-E is a spacious car with plenty of room for front and rear passengers. Even with the coupe styling there is plenty of head room in the back. The VW ID4 is perhaps a little roomier, but even if you are six-foot you can easily get comfy in the back of the Mach-E and there is a flat floor as well, meaning more room for the middle seat passenger. 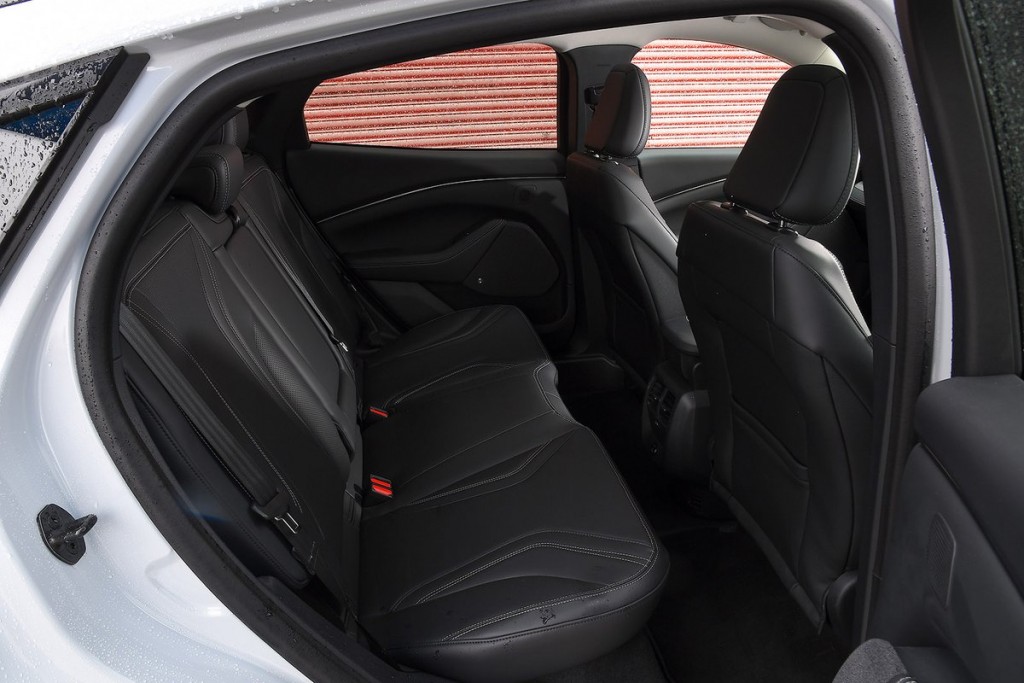 Downsides centre on the quality of the materials used. You get quite a lot of hard plastics which cheapen the interior and, despite the seats being covered in a cattle-friendly faux leather, the material looks the wrong side of artificial. The Kia e-Niro and VW ID4 are on a par, but this is the area where the Mustang Mach-E really shows its price difference to more expensive rivals such as the Audi e-tron and BMW iX3.

It all sounds a bit straight. Surprise me
Behold, the E-Latch - Ford’s reinvention of the humble door handle.

This clever form of keyless entry has a variety of modes to get you in the car. For example, you can unlock the car if you are merely holding the key, or you can use your smartphone to instruct the door to open.

Ford has also fitted a touchscreen keypad on the door pillar which you can use to input a code which then unlocks the car. We don’t recommend losing your car keys, but memories of that time Little Johnny locked himself inside the car are a useful reminder that this could save the embarrassment of having to ask the fire brigade round to help out should such a situation ever arise again.

Should I consider any rivals?
The nearest rival to the Mustang Mach-E is the VW ID4, which is a practical family SUV that offers good range between charges, is well equipped if you go for the in First Edition trim and is comfortable and quiet when on the move. It rides far better than the Mach-E and considering its price, is excellent value for money. 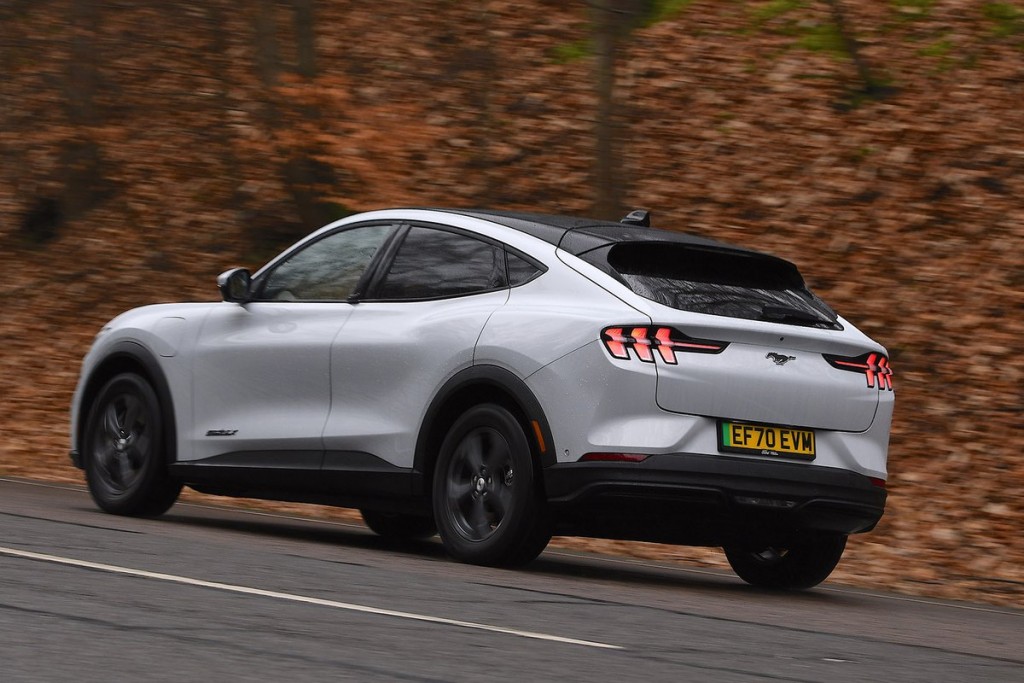 Another option would be the Kia e-Niro, an EV which is based on a regular petrol and diesel model. The e-Niro is far cheaper than the Mach E and we think its a better package overall thanks to its solid range figures, excellent warranty and relaxing driving experience.

We’ve also mentioned the Audi E-tron, Jaguar I-Pace and BMW iX3 at various points in this review. They all cost a lot more than the Mach-E, and stand out especially for the superiority of their interiors, but the gap is not perhaps as big as the price difference suggests.

Verdict
Ford’s first attempt at an EV is admirable and there is no doubt that the Mach-E offers terrific range potential, is well equipped and the infotainment system is good. However, it is a little pricey and is let down by the poor ride and handling. Put on the spot, we’d steer you towards test driving the VW ID4 or Tesla Model 3 before making a final decision. 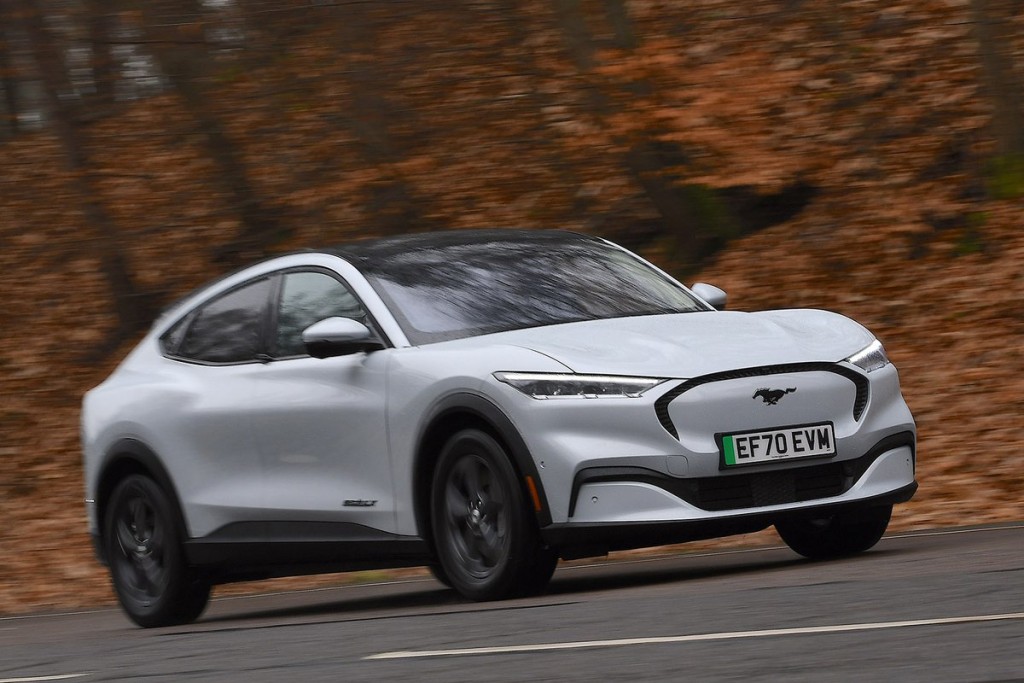