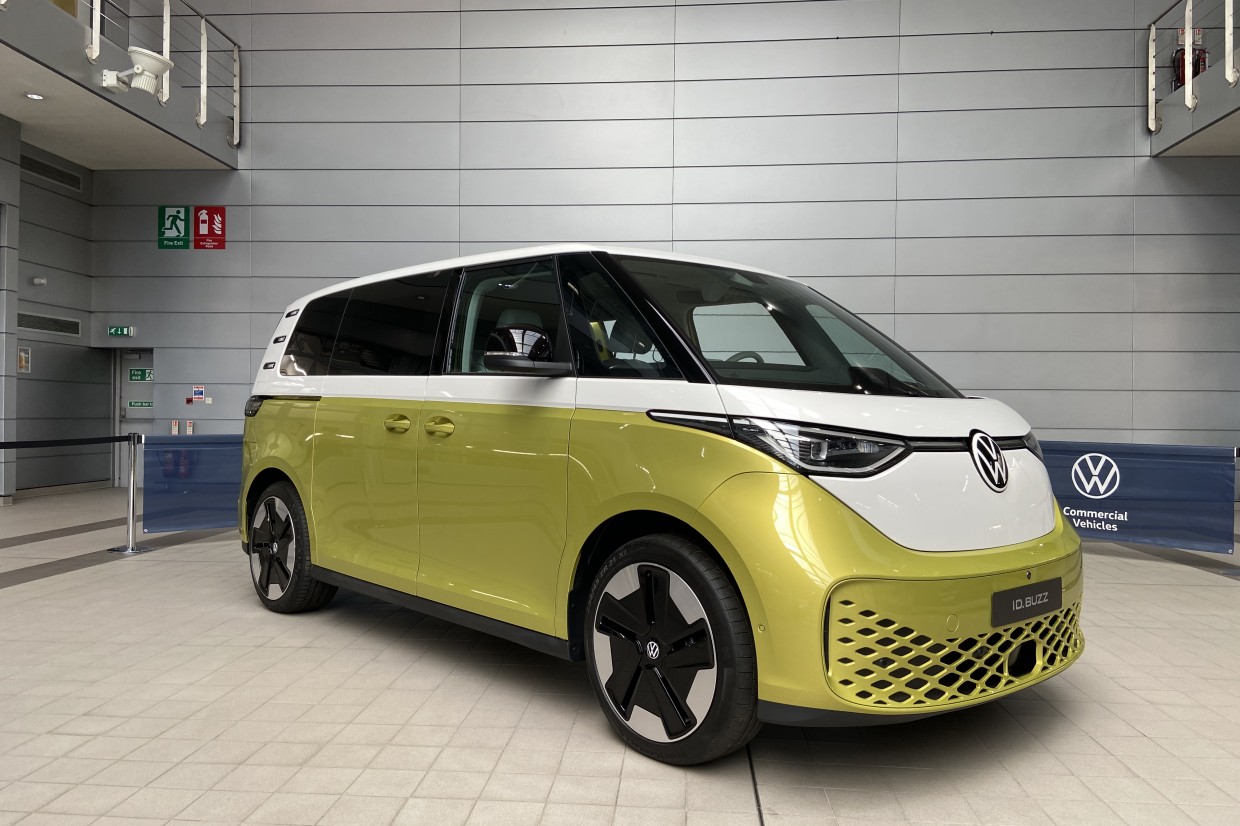 The new Volkswagen ID Buzz, a retro-style electric reimagining of the classic Type 2 bus, will be priced from £57,115 when it goes on sale in the UK in July.

The long-awaited new vehicle will initially be offered with a 77kWh battery that powered a 150kW rear-drive motor, giving it an official range of 258 miles. More battery options will follow in the future.

Between now and June 30 customers are able to place a £2000 pre-booking fee to secure a priority slot to specify their ID Buzz when sales behind next month, although that is only open for the passenger model and not the ID Buzz Cargo.

The First Edition models will include Car2X technology, LED lights, 21-inch wheels and a host of safety tech.

What is the ID Buzz?

The much-anticipated new machine is the largest model yet launched in the German firm’s electric ID range, and features styling directly inspired by the original Transporter, which launched in 1950. 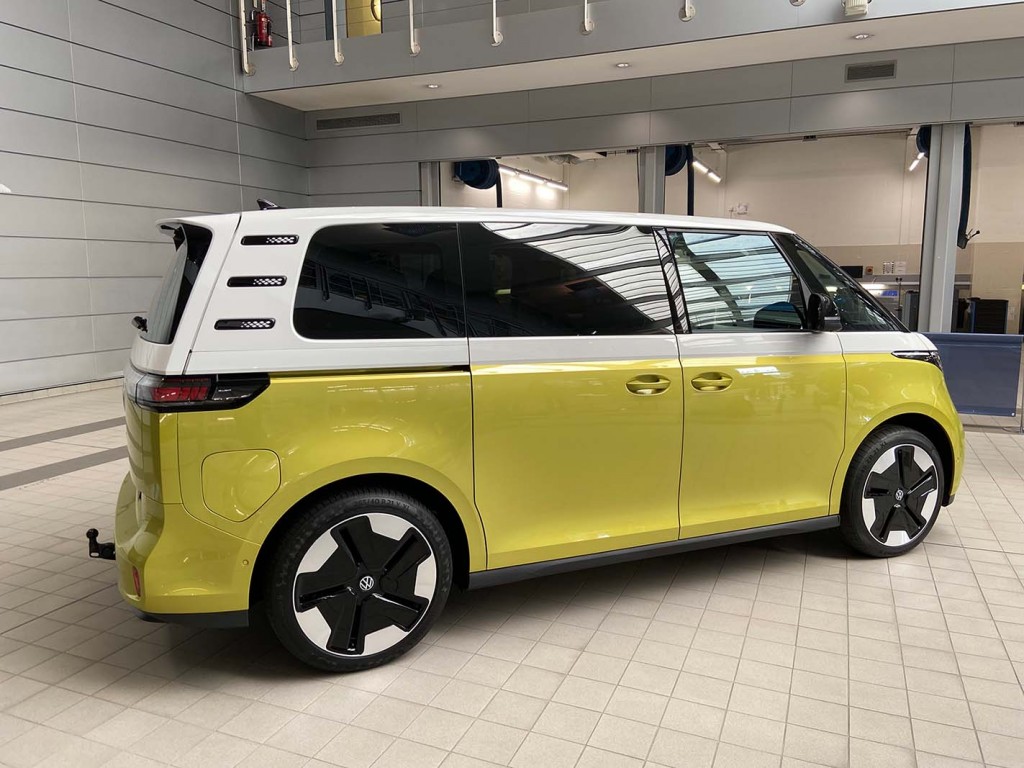 Volkswagen says it has put sustainability at the forefront of the long-awaited ID Buzz which is produced with a carbon neutral footprint, and uses a host of recycled materials that would surely win the approval of some of the hipsters who helped make the camper a cult classic in the 1960s. 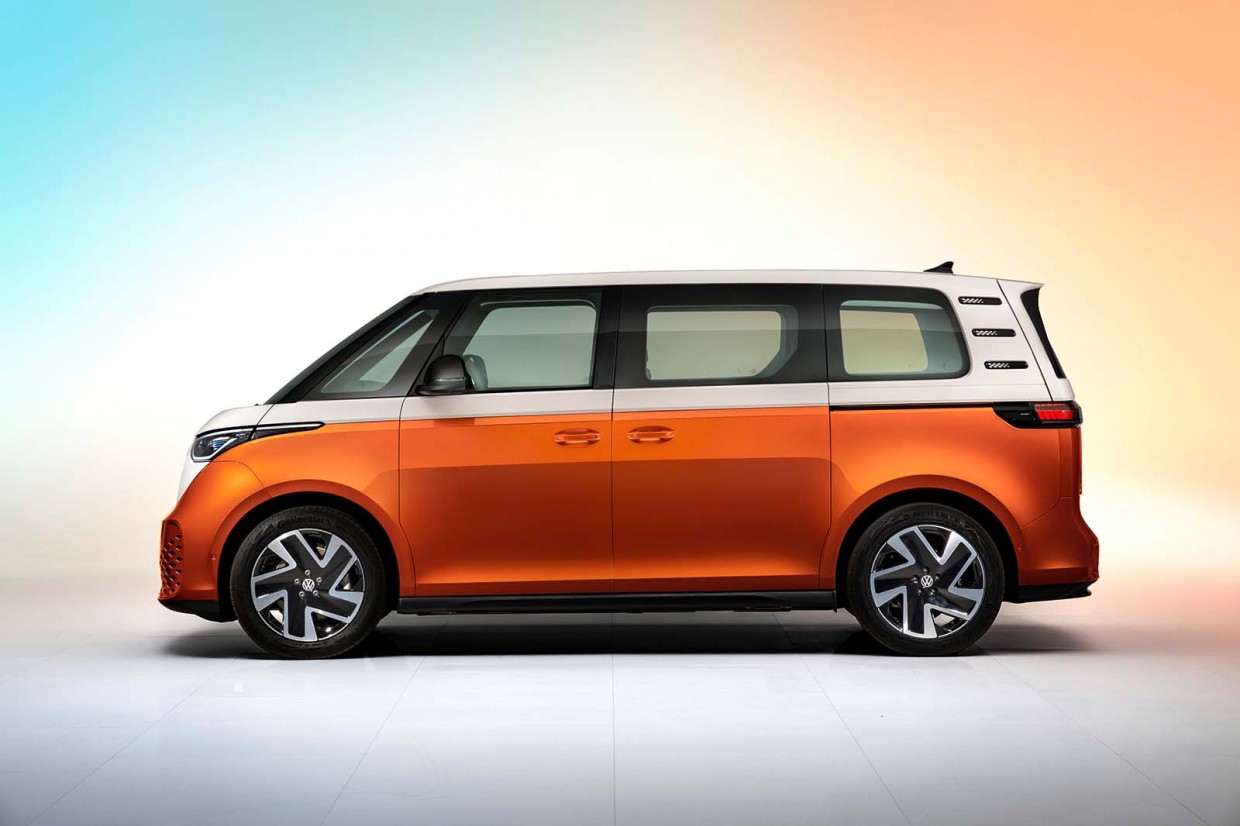 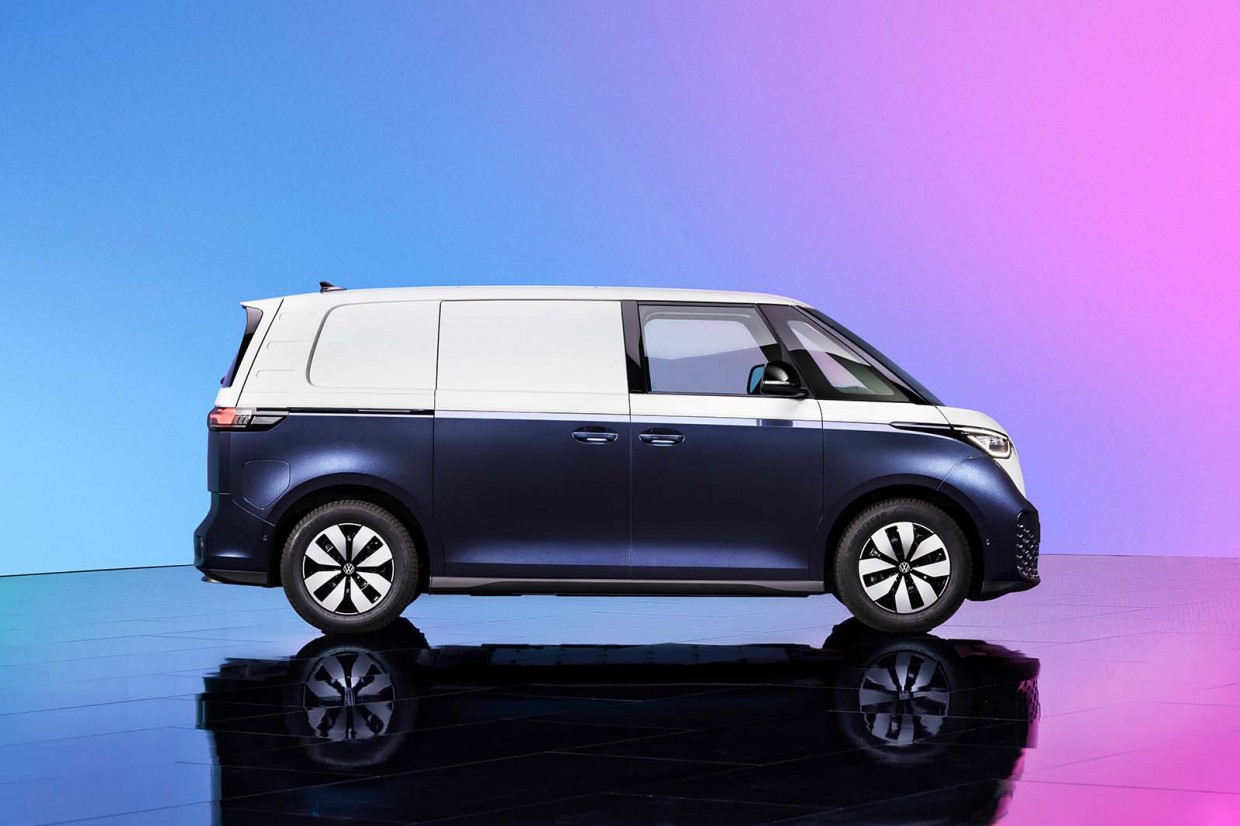 What’s all the buzz?
The Type 2 launched in 1950 as Volkswagen’s second vehicle (the Beetle was the Type 1), and became an icon in the 1960s. Officially known as the Transporter, Kombi or Microbus depending on body type, it has a host of nicknames, including the camper, bus, and hippie van Confusingly, VW now refers to the original Transporter as the T1…

Given the continued popularity of the original, the hype around the ID Buzz is no surprise. The concept was first shown in 2017, and was the latest in a long line of attempted revivals. But this time  VW has finally taken the plunge and the Buzz is on its way - to infinity and beyond.

So there’s a MPV and a commercial van?
VW will offer the ID Buzz five-seat MPV alongside a commercial Cargo Van variant. The two machines use a stretched version of Volkswagen’s electric MEB platform, which is also the basis for the Volkswagen ID 3 hatch and Volkswagen ID 4 SUV. 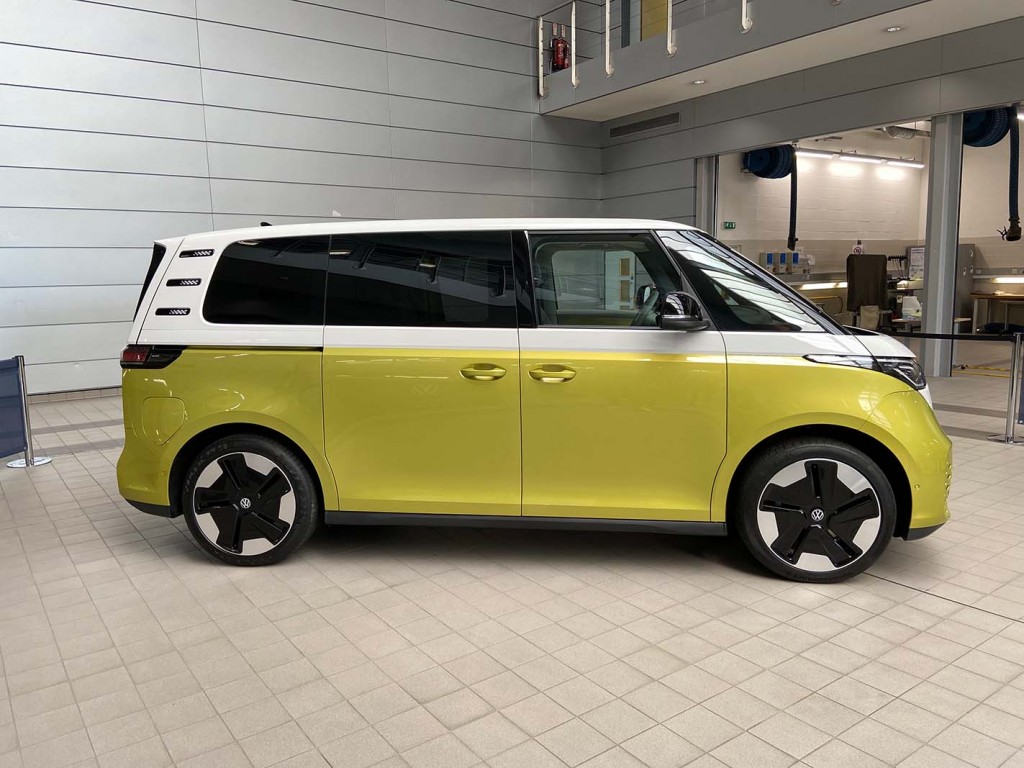 The Buzz has a 2988mm wheelbase, which is roughly the same as the current T6.1 Transporter. They are also 4712mm long, 1985mm wide and 1937mm high. Volkswagen says that an extended wheelbase model – offering room for seven seats – will come to the market in the ‘medium term’.

New electric cars for 2022 and beyond: what's coming when

The ID Buzz has a whopping 1121 litres of luggage space, and if the second row bench seat is folded down that capacity increases to up to 2205 litres. VW claims the Buzz is ‘perfectly tailored to leisure time as it is to business use’, so it shouldn’t break a sweat ferrying your surfboards to the beach on a Sunday, then tackling the morning commute on a Monday. 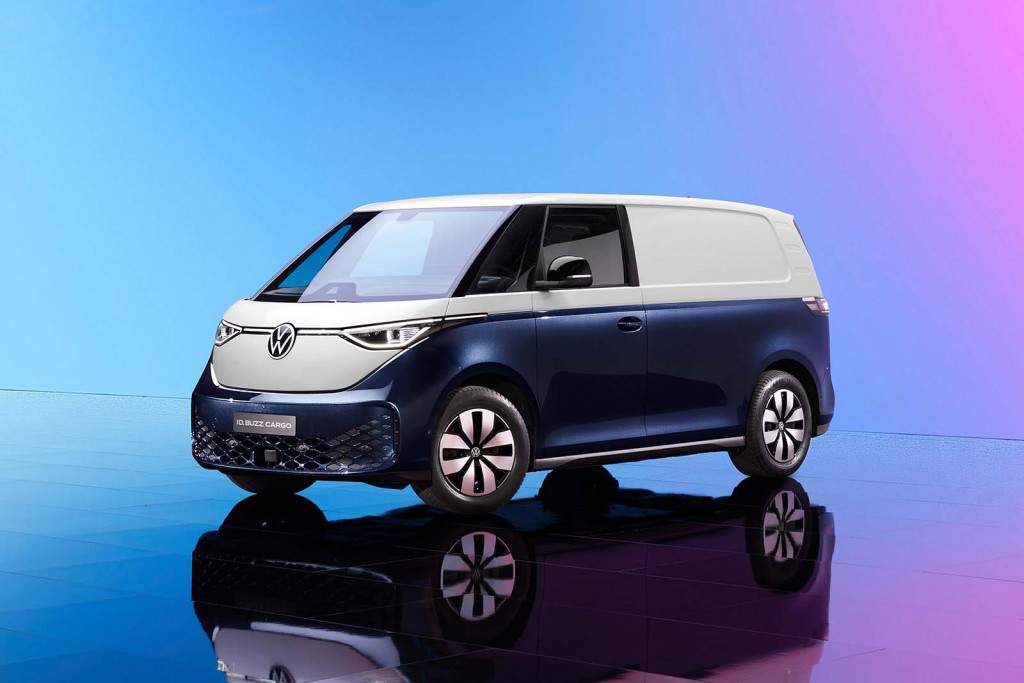 In the UK later this year, higher-trim models get LED headlights, alloy wheels, CCS charging cable and a number of driver assistance systems. The ID Buzz Cargo gets more van-orientated standard equipment including steel wheels, a ‘robust’ cargo floor and the choice of two or three seats upfront. Oh, and the MPV and commercial versions will eventually be joined by an ID Buzz California camper conversion, which we’re very excited about.

Lets get all the numbers out of the way
Powering the Buzz is a 77kWh battery, which is connected to an electric motor mounted on the rear axle. VW is yet to disclose the official range, but it’s expected to be in the region of 250 miles.

The motor produces 150kW (201bhp) and 229lb ft of torque, giving the Buzz an electronically limited top speed of 90mph. A more powerful twin-motor version, with a set up similar to that on the ID 4, is likely to follow. 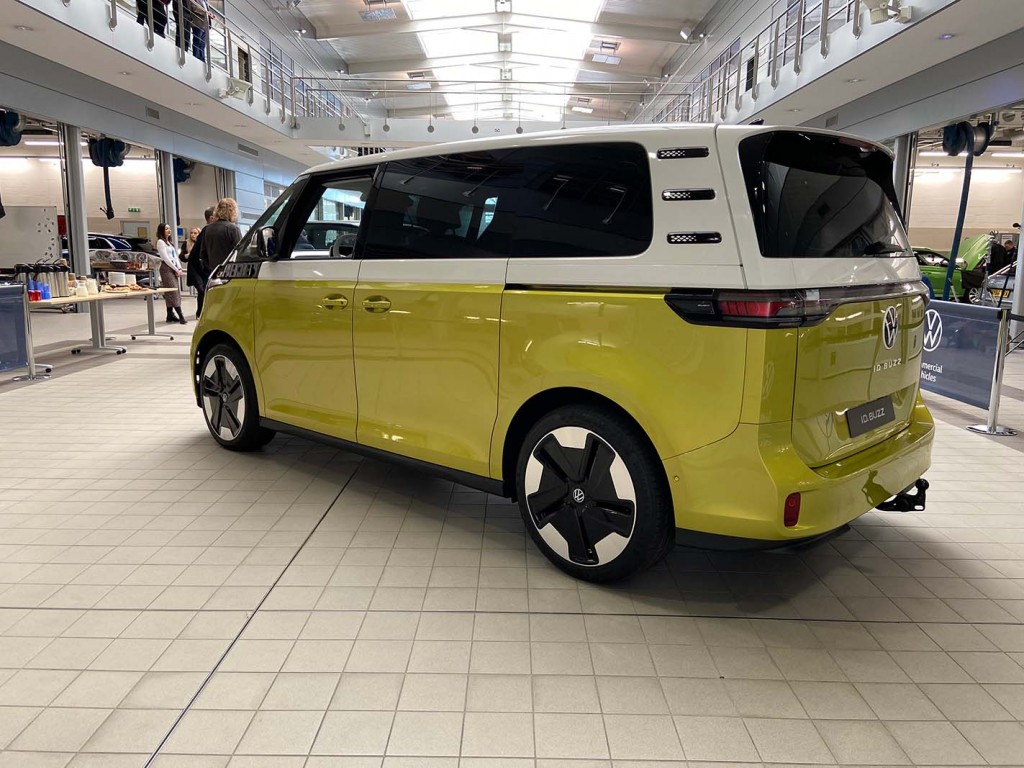 Using a CCS plug connector and a charging device capable of speeds of up to 170kW, the battery can be replenished from 5 to 80% in around 30 minutes.

Bringing the camper into the 21st Century
A key design feature is the short overhangs on the ID Buzz, a feature that was evident on the original camper thanks to the cabin sitting over the front axle. The iconic two-tone paint is also recreated on the Buzz while the V-shaped bonnet has been restyled with a new headlight design.

Volkswagen design chief Jozef Kaban said: “With the ID Buzz we are transferring the T1 DNA to the present day and thus into the era of electric mobility and sustainability”. 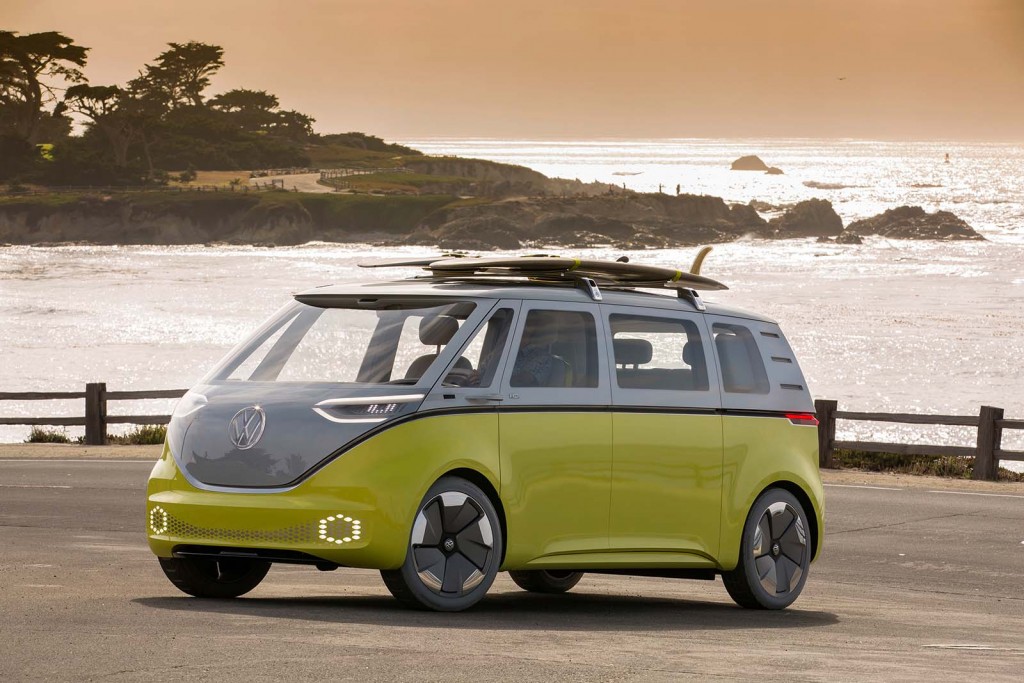 Kaban added that the concept car revealed at the Detroit Motor Show in 2017 had been “systematically pursued”’ for the full production version.

The ID Buzz has a drag coefficient of 0.285 and the Buzz Cargo 0.29. Despite its boxy shape and relatively flat front end, VW has worked to optimise the aerodynamics and hopes that the lower drag coefficient will help to reduce energy consumption and increase range. 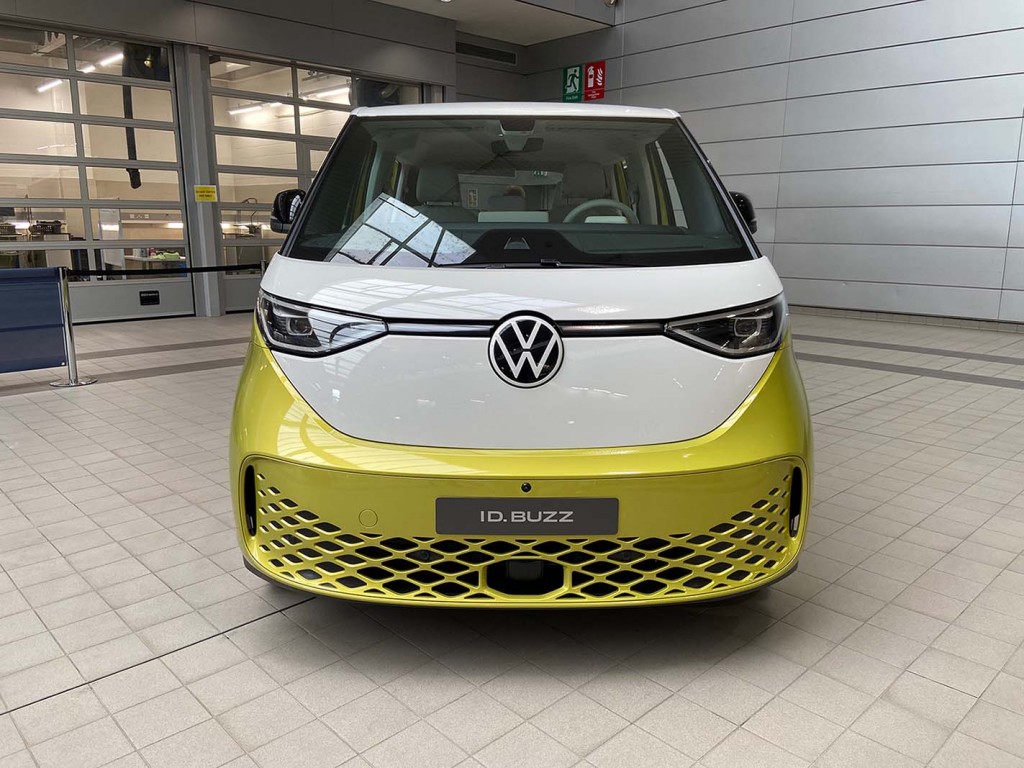 What about the interior?
Inside the new VW stays true to the established ID design language, featuring sustainable recycled materials and bold colour schemes. Volkswagen offers a number of interior styling packs, and buyers now have the option to have the interior upholstery match the exterior colour of the car. Being an EV the batteries are stored low down in the floor of the Buzz allowing for a completely flat floor, adding to its overall roominess. The seats are slightly elevated too in keeping with the original van’s seating position.

As mentioned previously VW has laden its new Buzz with sustainable materials. The seats covers, floor coverings and roof liner will use recycled products, including Seaqual yarn, which uses fibres made from 10% collected ocean plastics and 90% recycled plastic bottles. 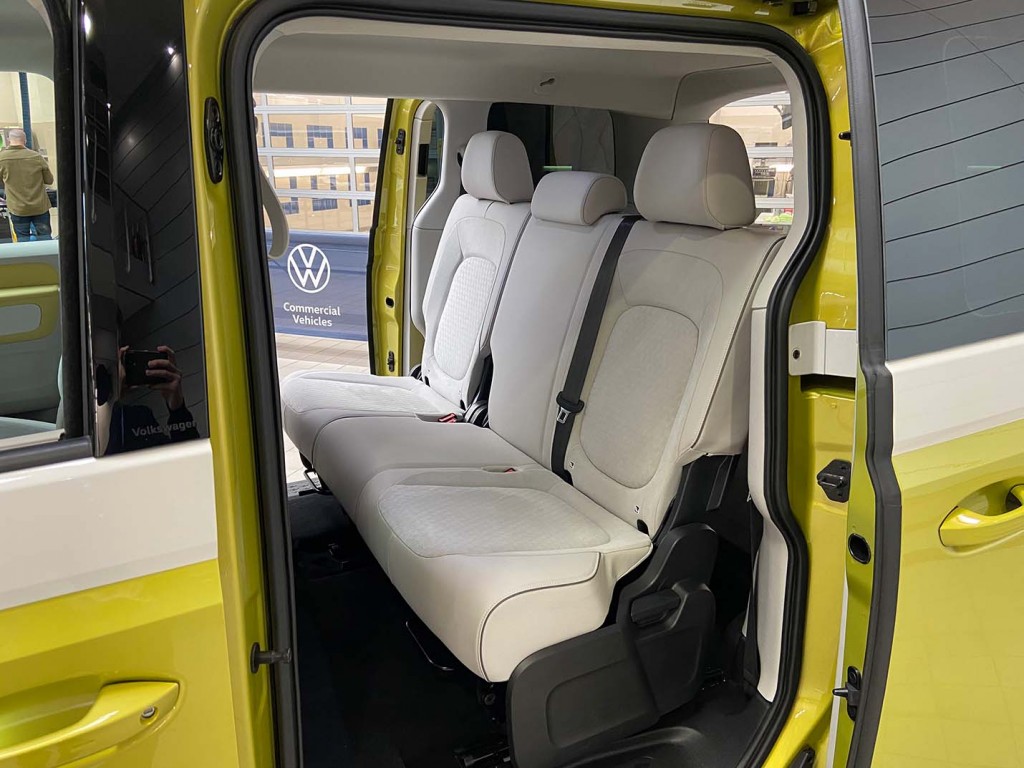 Surely there’s some interesting tech onboard?
You would be right. Alongside the general mod-cons that one would expect to find in an electric car, the Buzz has a number of quirks which set it apart. For example, VW claims the ID Light feature uses the interior lighting in an intuitive way to warn the driver of hazards.

The Buzz also comes with a host of driver assistance aids including a Park Assist Plus feature with Memory Function and a Travel Assist lane keep assist system. Using ‘swarm data’ the Travel Assist feature scans the road and can keep the car in lane simply by identifying the carriageway boundary. VW claims that such systems should help the brand with its development of autonomous driving technology. 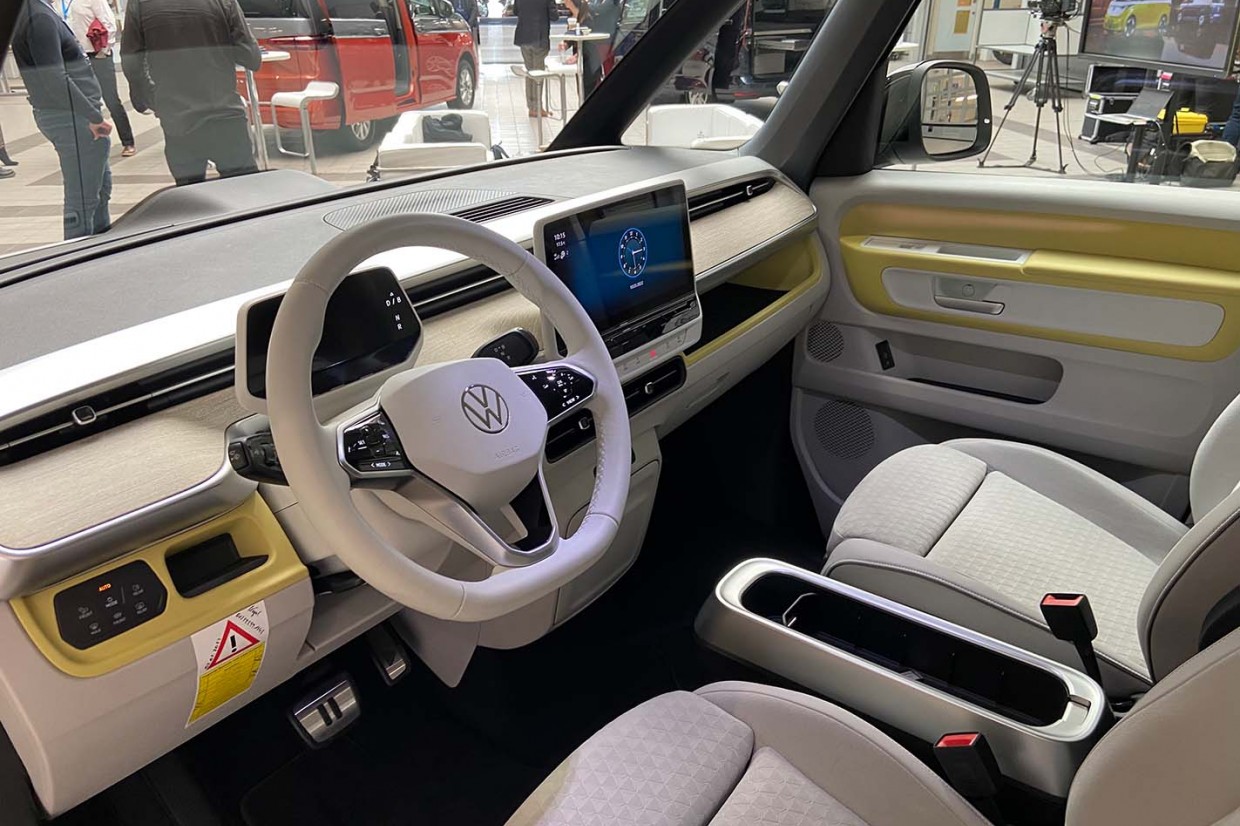 Sitting in the middle of the dashboard is a 10-inch infotainment screen. Buyers can opt for a bigger 12 inch screen if they opt for the ‘Discover Pro’ navigation system. The entry level ID Buzz models get VW’s app connectivity feature as standard, however the App Connect feature will be available as an option on the ID Buzz Cargo.

In keeping with the minimalist feel of the ID3 and ID4 the Buzz will feature digital buttons and touch sliders in order to control features such as the climate control and infotainment systems. This might not appeal to most and can be more fiddly than conventional buttons; something we think you will get used to.