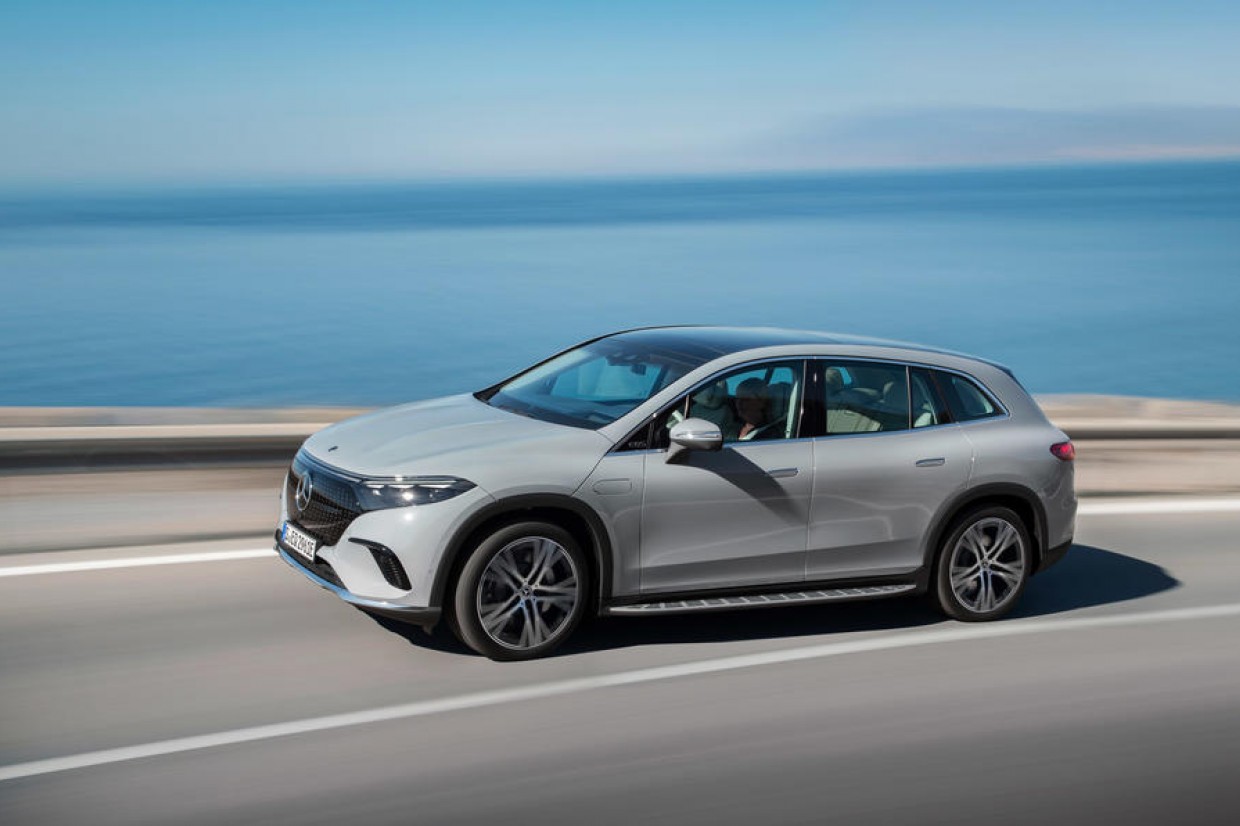 The Mercedes EQS has been revealed, with the luxury electric SUV building on the brand’s ever-growing line-up of EVs.

The new EQS SUV is set to rival the Audi e-tron and BMW iX when it lands in showrooms later this year, and sits on the same Electric Vehicle Platform (EVA) architecture as the EQS and EQE saloons.

All EQS SUV launch models have a 107.8kWh battery, the same unit found in the EQS saloon. That’s enough for up to 410 miles of range on the official test cycle. 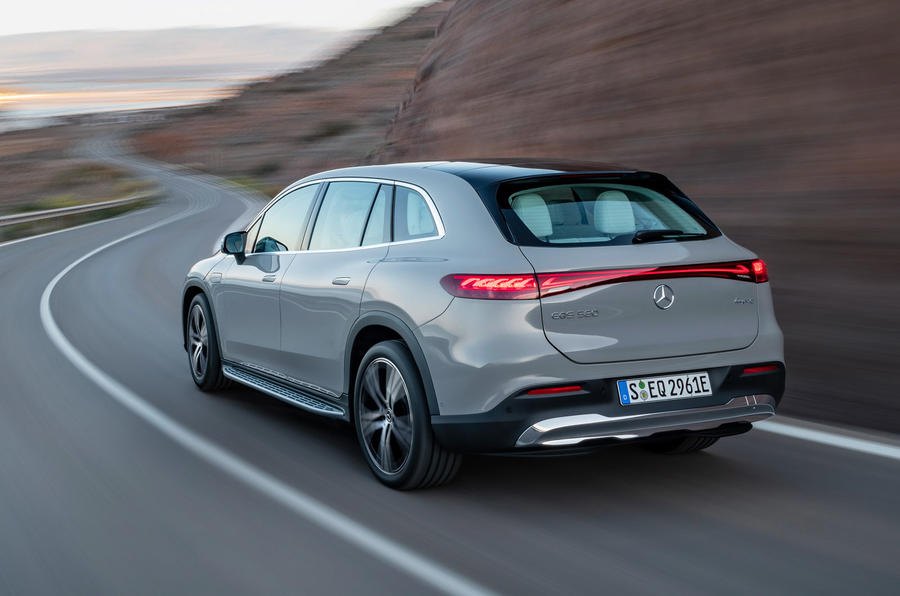 Mercedes also says that thanks to the EVA architecture, the battery sits low down in the chassis, giving the new EQS the lowest centre of gravity of any of its SUVs on sale - potentially giving it ride and handling benefits.

On the outside…
The new EQS has a smooth exterior silhouette, much like the EQC. However, it is far bigger; At 5125mm in length, 1959mm in width and 1718mm in height, the EQS SUV is 363mm longer, 75mm wider and 94mm taller than the EQC, with the overall dimensions resembling that of the Mercedes GLS SUV - which is so big you could easily live in it. 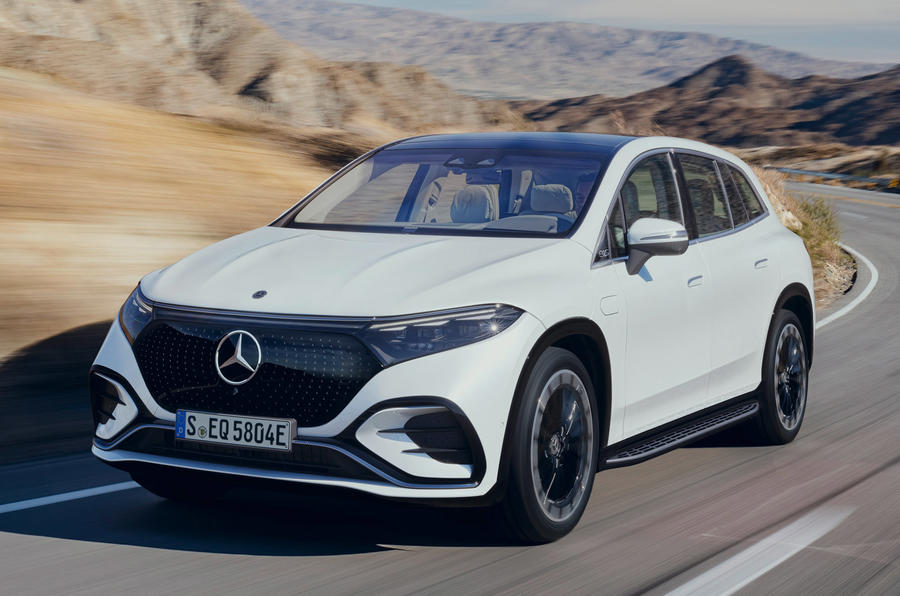 Being such a big EV, Mercedes will offer the new EQS with an optional third row of seats, to accommodate seven passengers.

On first glance the new EQS SUV’s styling is similar to the EQC, but has a number of key differences which set it apart. Most notable is the front end, which features a black panel grille that extends down towards the lower part of the front bumper and is similar to the one found on the EQS and EQE saloons.

There is also an LED light bar across the top of the grille which joins the two headlights together, which helps to maintain the EQ design language. 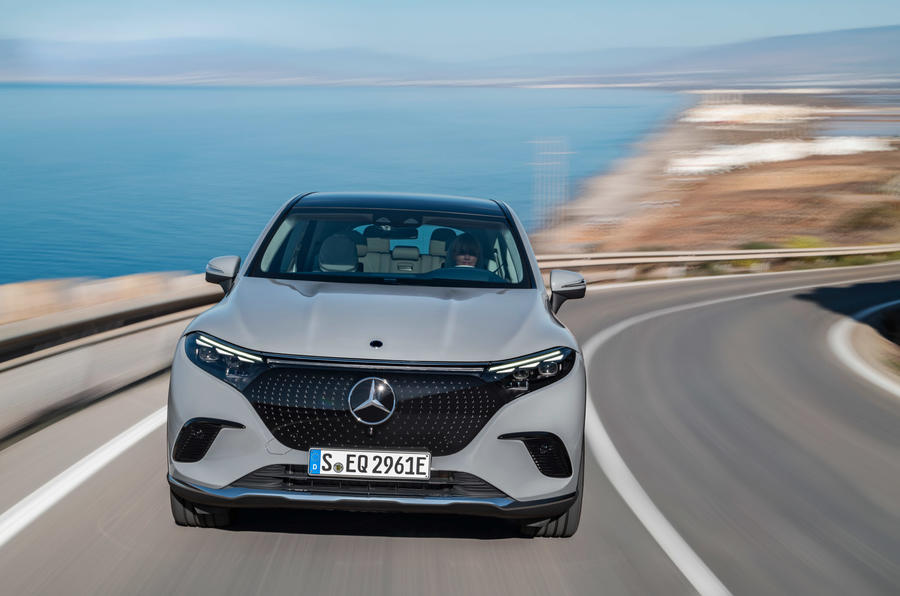 The clamshell bonnet - which has become a common feature on EQ models - can only be opened for maintenance and servicing. Mercedes has therefore moved the washer filler to the driver’s side front panel.

To maximise aerodynamic efficiency the EQS SUV has flush door handles, while the door mirrors sit high on its shoulders. Mercedes has also gone to great lengths to create a bespoke wheel design that will also aid aerodynamics to help its range. The EQS SUV’s drag coefficient remains under wraps.

At the rear of the EQS mirrors the front end, with LED taillights and a curved LED light bar integrated into the boot lid. 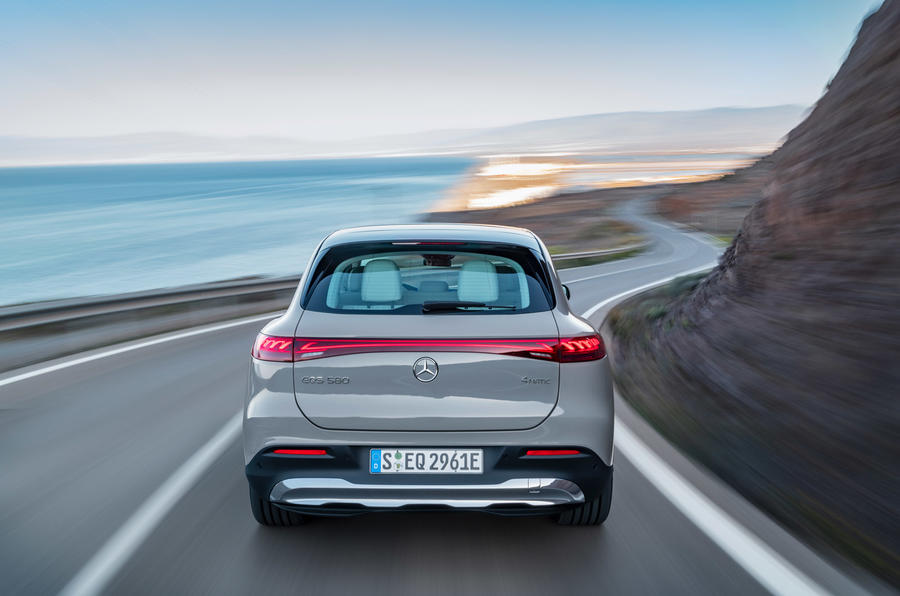 On the inside…
Mercedes has really upped its game when it comes to interior technology, and the EQS SUV is no exception, thanks in part to the firm’s eye-catching Hyperscreen technology.

The standard models are fitted with a 12.3 inch digital instrument display and a portrait-orientated infotainment display, while the range topping EQS 580 model gets the striking Hypercreen. 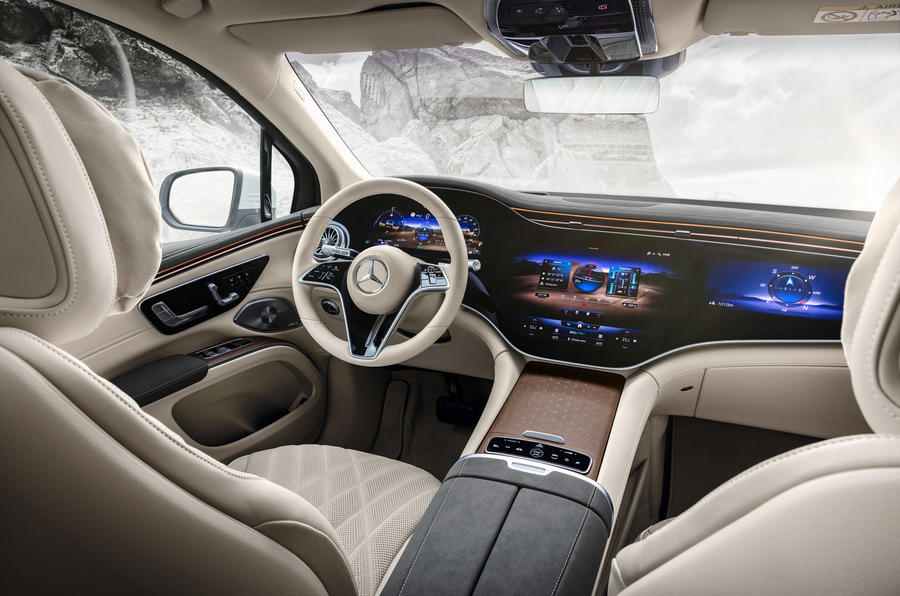 It covers the entire length of the dashboard and includes the 12.3 inch driver display, a whopping 17.7 inch central infotainment display and another 12.3 inch passenger screen. Due to its size, the Hyperscreen operates on an eight-core processor and with 24-gigabytes of ram. That’s probably enough to put your laptop in the shade. 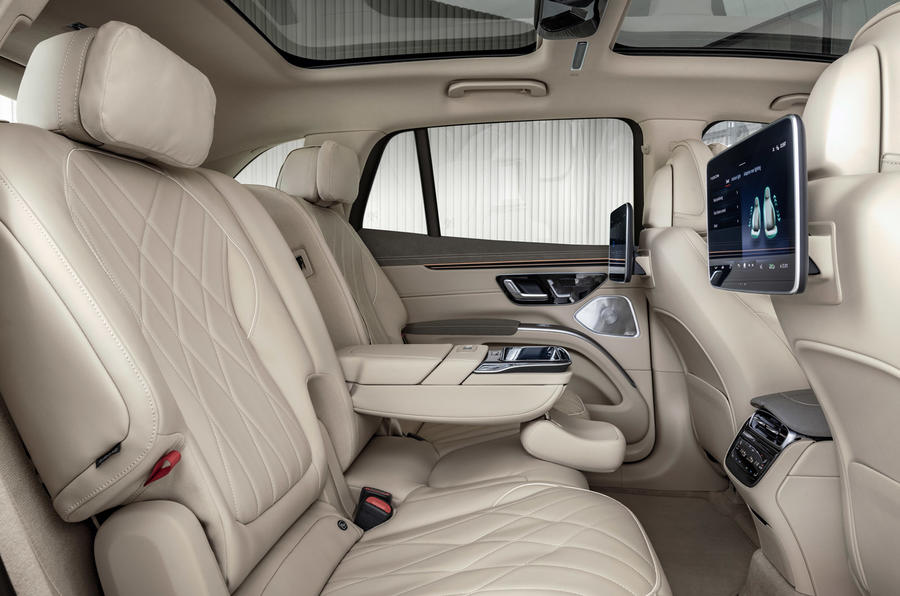 The batteries and model line-up
There will be two EQS SUV variants, with both benefitting from the large 107.8kWh battery.

The entry-level model is the EQS 450+ which has a single-motor, rear-wheel drive layout, with an overall power output of 265kW (355bhp) and 419lb ft of torque. 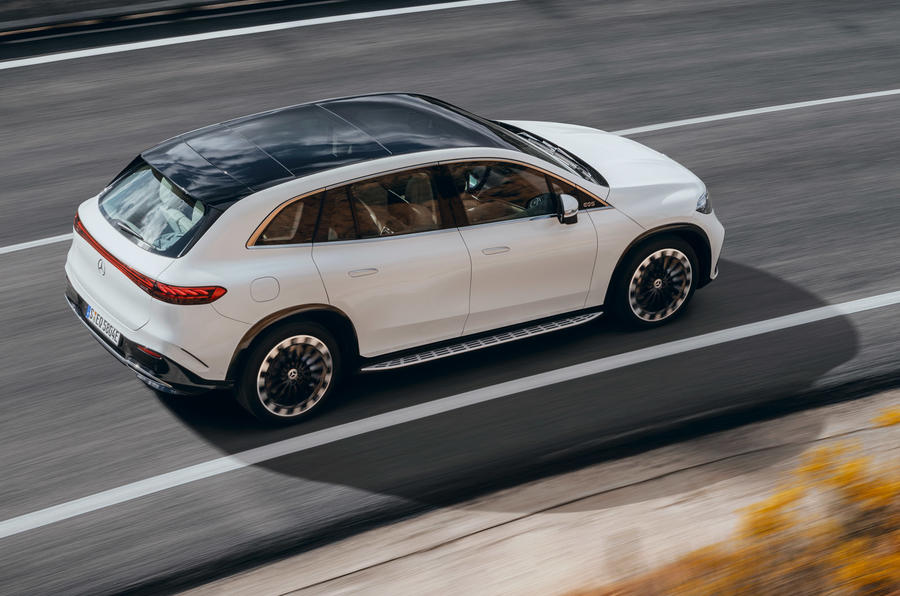 Mercedes says the entry-level EQS 450+ can travel between 333 and 410 miles, while the 450 4Matic can achieve 315 to 381 miles from a single charge. Impressive figures considering the size and weight of the EQS SUV.

Topping the EQS SUV range is the 580 4Matic, a dual-motor, four-wheel-drive EV with an overall power output of 400kW (536bhp) and 632lb ft of torque. Despite the hike in performance, the range-topping 580 can also achieve between 315 to 381 miles from a single charge.

Mercedes says the battery can be charged at up to a speed of 200kW using a DC charging device, meaning a top-up from 10-80% would take around 31 minutes. 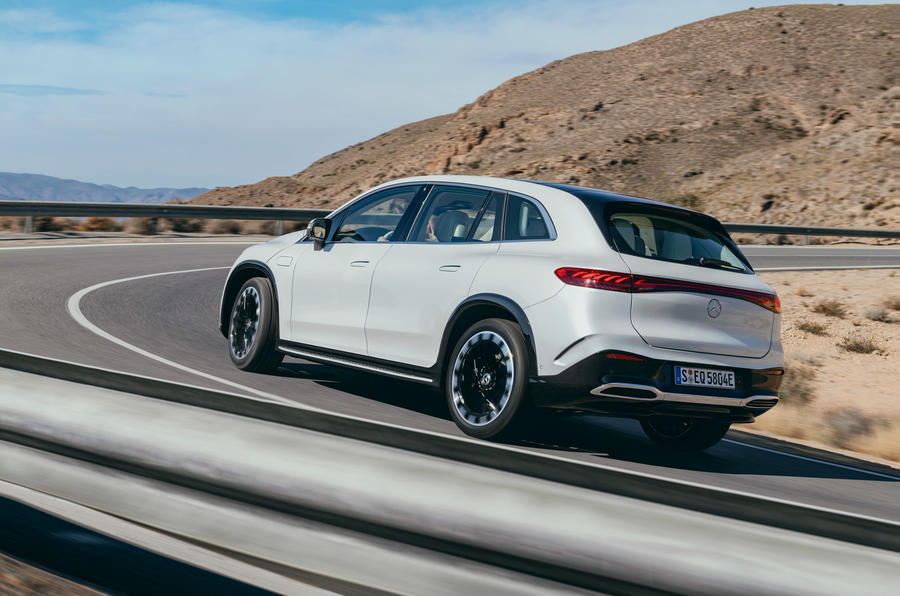 The firm has also added a number of energy recuperation modes to help increase the range of the EQS SUV. D+ mode will harness energy when coasting, while D mode is the standard energy regeneration setting. D- enhances energy regeneration, helping to maximise the EQS SUV’s range. D-Auto is an adaptive system which alters the regeneration depending on the driving conditions.

Alongside the energy regeneration systems are four primary driving modes, Eco, Comfort Sport - and if you’re feeling ambitious - Off Road.

The intelligent Off Road mode won’t transform the EQS SUV into a Land Rover Defender-rivalling 4x4, but Mercedes says the mode will be able to tackle “light terrain with ease”.

When driving above 68mph the car is automatically lowered by 10mm in Comfort mode and 15mm when in Sport mode to reduce drag and improve aerodynamic efficiency. At 50mph the ride height can be raised by up to 25mm to improve ground clearance. 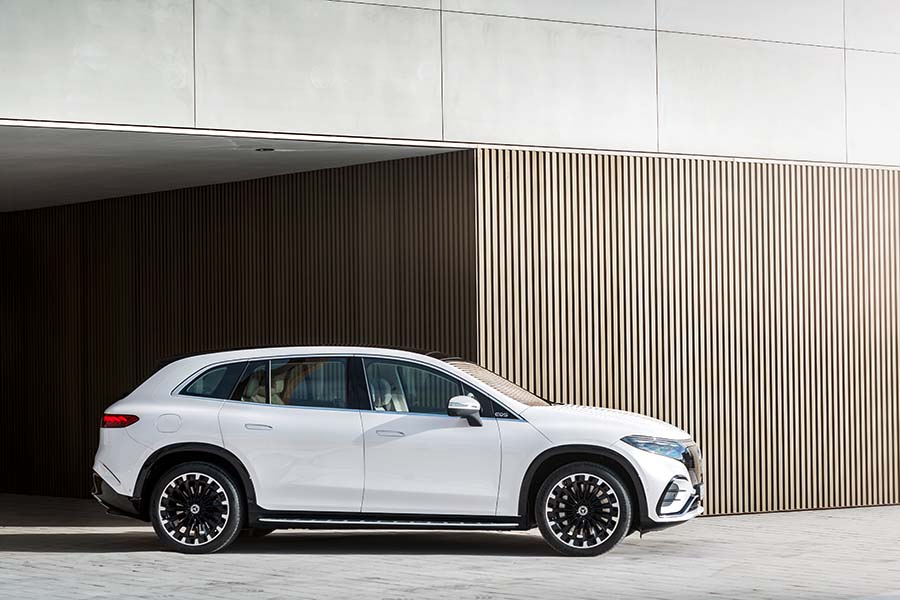 "With the EQS SUV, we are continuing to consistently implement the strategy of making our vehicles more sustainable and digital - with the goal of building the most desirable electric cars in the world,” said Ola Källenius, Mercedes-Benz Group chairman.

Markus Schäfer, Mercedes-Benz Group’s chief technology officer, added: “"In order to remain the leading luxury brand in an all-electric future, Mercedes-Benz is accelerating the  market launch of its EQ models.

“This year, our portfolio will comprise nine all-electric Mercedes EQ model  worldwide, and we have more exciting products in the pipeline".

The EQS SUV will be built at the Mercedes factory in Tuscaloosa, Alabama. Mercedes says the new model will enter production ‘in a few months time’. The price of the new EQS SUV has not been revealed but we expect it to start from around £120,000.