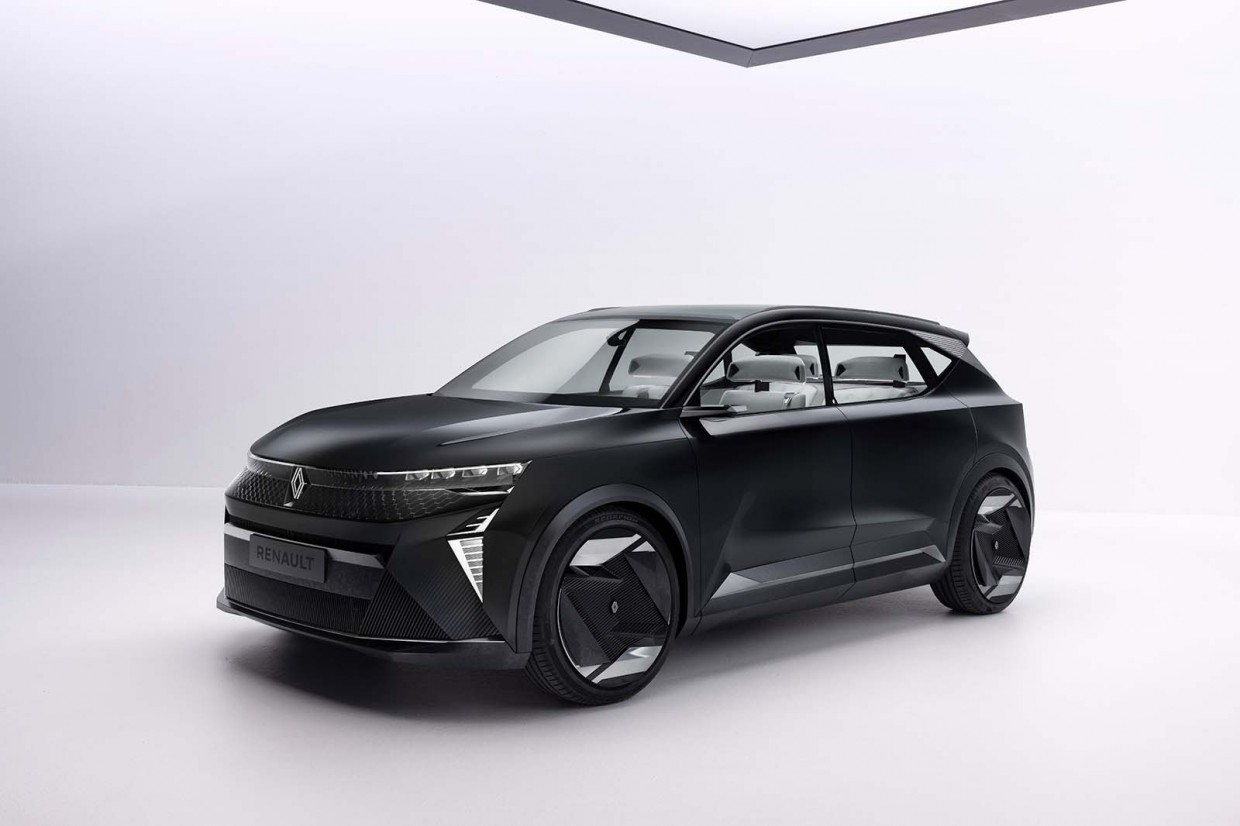 What are we looking at?
This is the Renault Scenic Vision concept, a bold hydrogen-electric SUV that previews a shiny new large new SUV that will revive the Scenic nameplate and arrive in 2024.

The Scenic? Isn’t that an MPV?
Correct. The French firm launched the people carrier in 1991and it was initially a huge hit. But sales slipped as MPVs went out of fashion and SUVs rose in popularity. It was dropped from Renault’s UK line-up in 2019 – with the model line axed entirely this year. Although to show how far it had slipped, you probably thought Renault had axed it years ago. 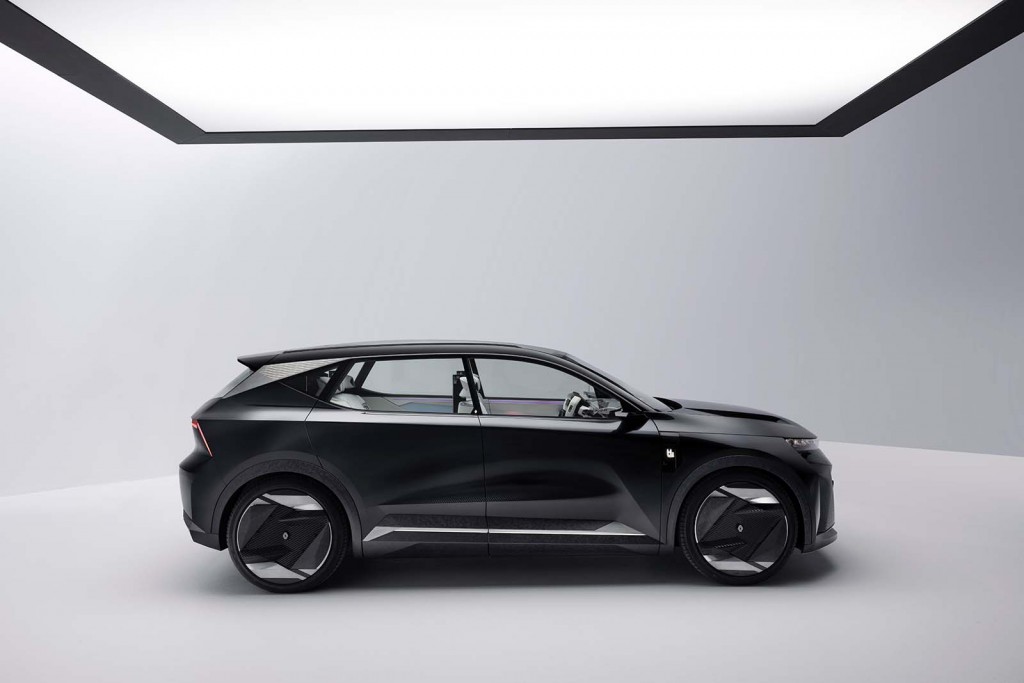 But it won’t be gone long: the Scenic nameplate will now be used for – predictably – a new electric SUV that will sit above the Renault Megane E-Tech in the firm’s EV line-up.

It’s basically following a Renault trend to use classic nameplates for bold new EVs, following the Megane E-Tech and the forthcoming Renault 5 hatch and Renault 4ever.

The new Scenic will launch in 2024 with a standard electric powertrain, with the unusual electric-hydrogen engine in the concept reflecting Renault’s “broader vision”, citing that the hydrogen propulsion system would become more prevalent beyond 2030 for use in light commercial vehicles.

Renault says the Scenic Vision design features “boast a modern design with a sustainable underbelly”, and focuses on the firm’s new sustainability program which draws on three main pillars - environment, safety and inclusion. 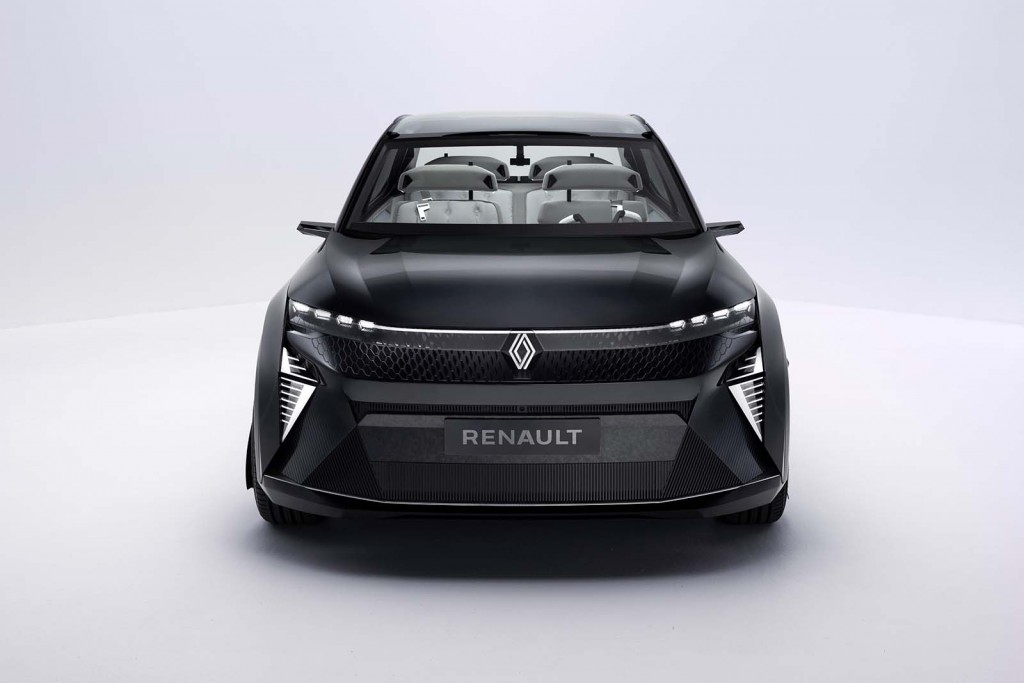 At the front the concept features a number of light signatures, with a pair of slim headlights flanking an illuminated Renault logo. More visual lights sit below the headlights, and instead of a conventional grille, the Scenic has a more striking front end formed of Renault diamond-shaped logos.

“With the light signatures being half Renault logo, they are very recognisable and you can play around with them as much as you want,” said Renault design boss Gilles Vidal.

Vidal added that moving forward, the light signatures would be used across the range in different ways but would centre around the Renault logo itself. 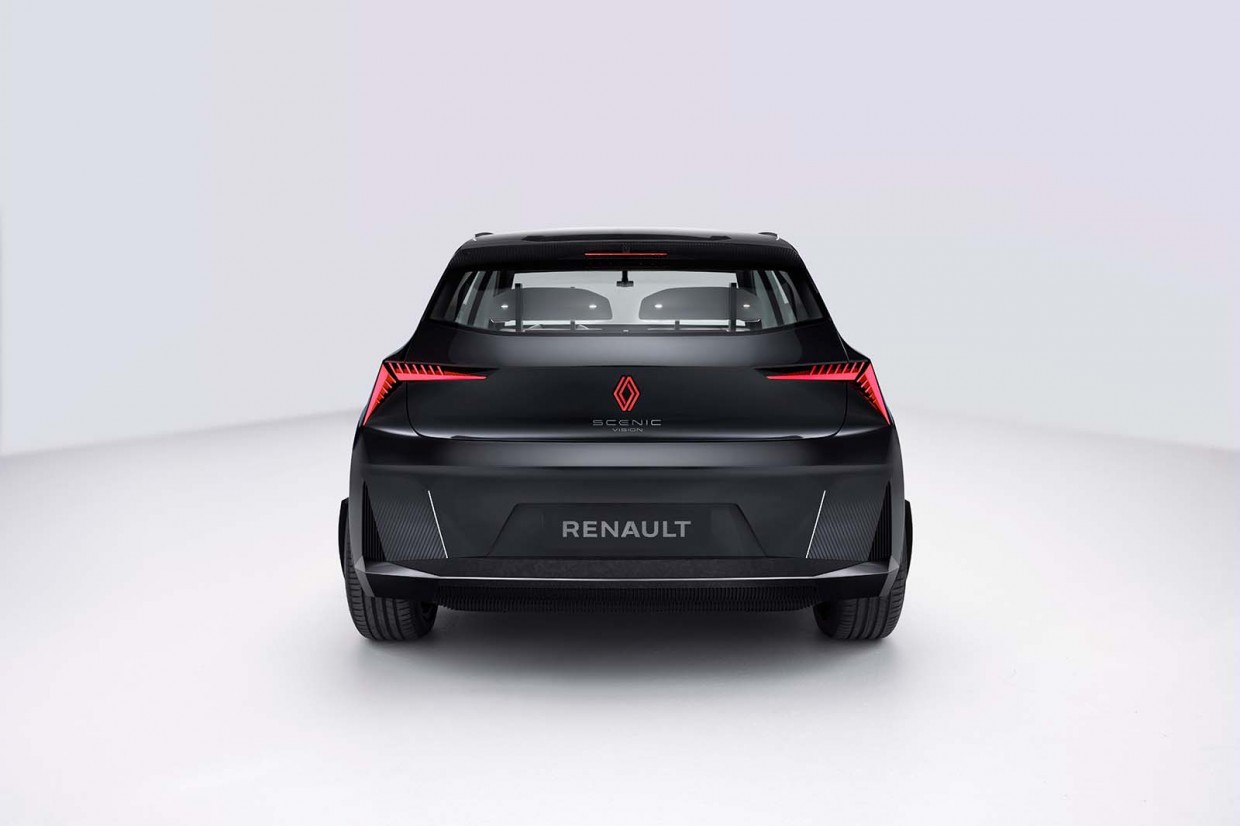 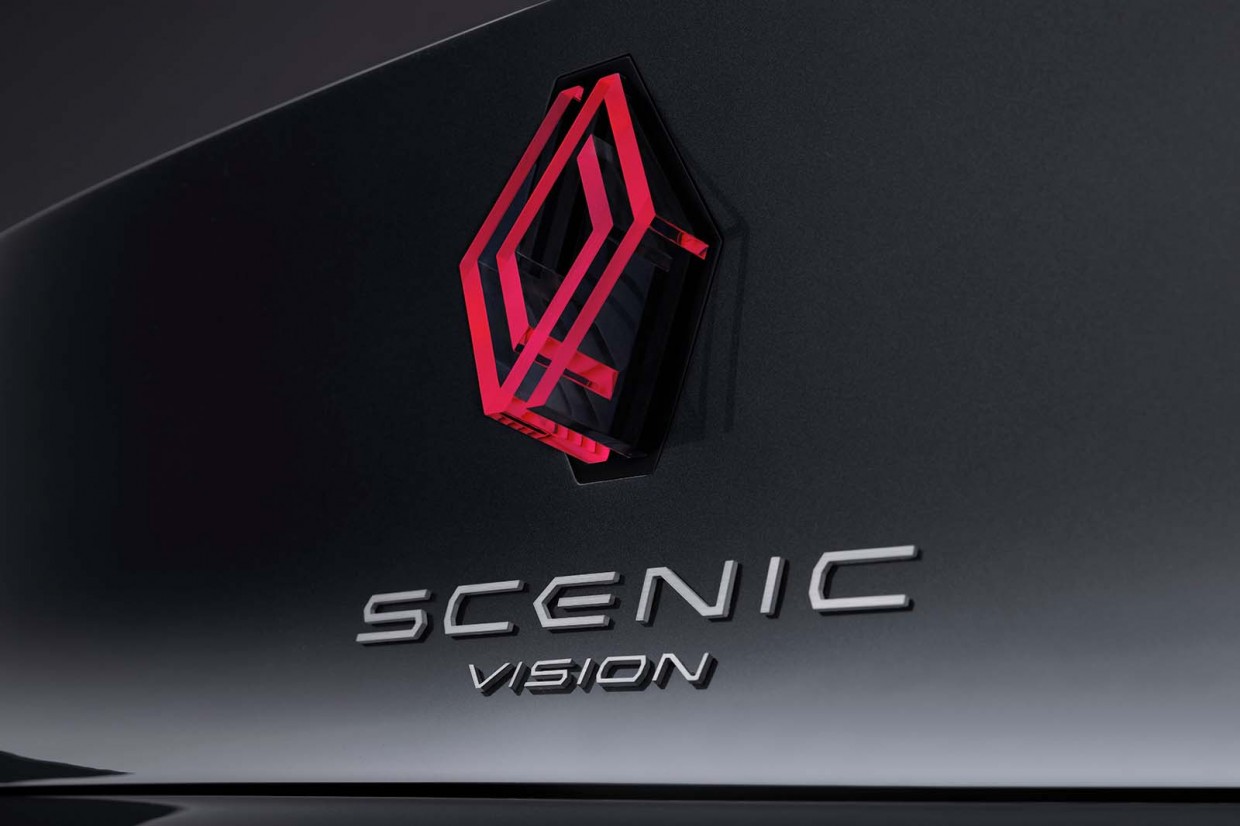 A colour-changing badge sits in the middle of the boot lid and mirrors the illuminated badge at the front.

Vidal stated that the exterior design was to evolve, but it was 90% ready for production in 2024 and is likely conventional doors with a standard B-pillar.

Renault says the hydrogen element of the powertrain acts as a range extender, enabling drivers to travel further without needing to stop for charging. 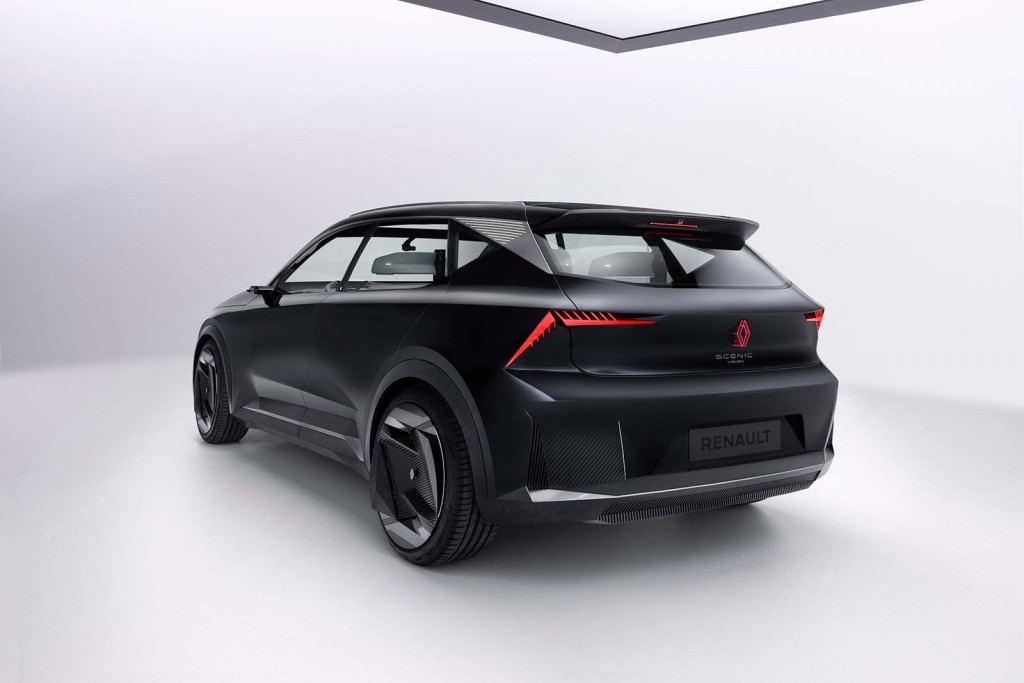 Renault clarified hydrogen would be part of its future beyond 2030, with the future Scenic EV powered by battery technology, although full specifications remain under wraps.

The car maker says that once the network of hydrogen stations is large enough, drivers will be able to travel up to 500 miles - or from Paris to Marseille - without stopping to charge the battery. Instead, drivers will only have to stop for five minutes or less to fill the hydrogen tank.

Renault Group’s innovation lab has developed an all-new hydrogen platform which is currently in the prototyping phase. But the Scenic EV won’t use that architecture: it will sit on the same CMF-EV platform as the Megane E-Tech and closely related Nissan Ariya. 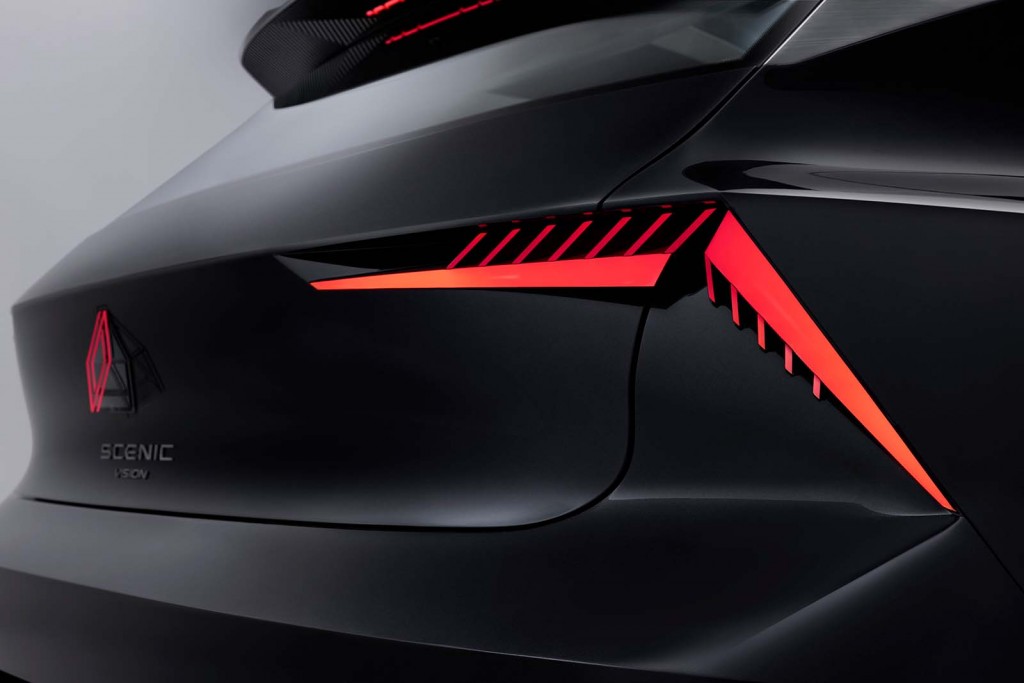 Renault has a smaller platform, CMF-BEV, which will be used by the forthcoming Renault 5.

“When you think about batteries for electric cars, if they come quickly like everyone expects and if they are better than we think then maybe hydrogen is dead,” said design boss, Vidal.

“But as a company you want to be everywhere and you want to be able to react. We need to be experimenting because one day a hydrogen car might make sense.” 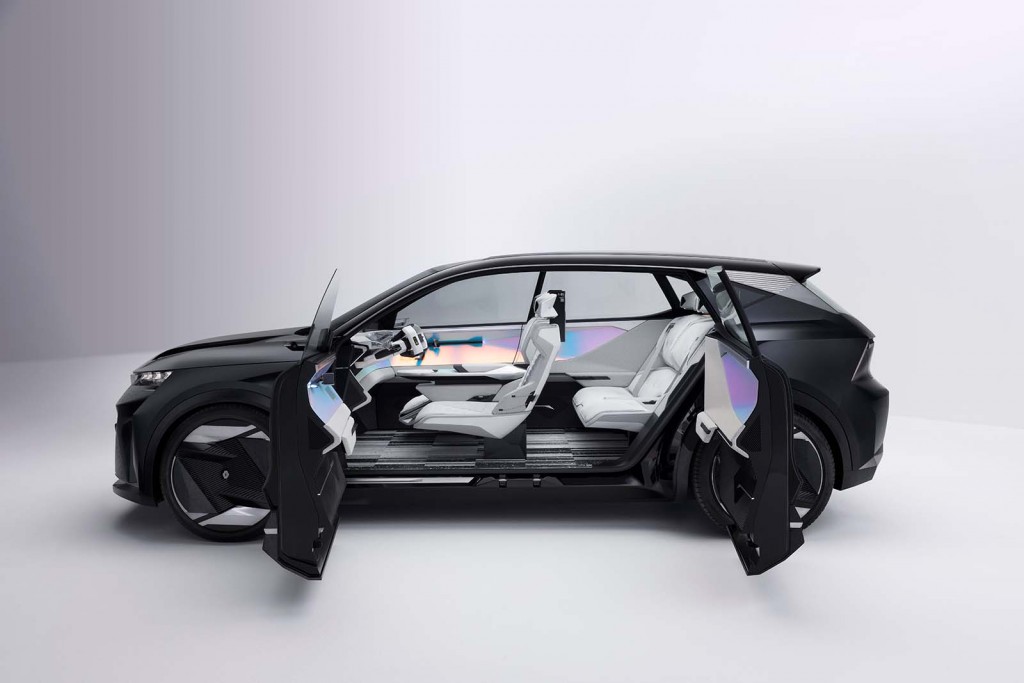 And on the inside…
Sustainability boss Cléa Martinet reinforced the brand’s approach to the overall design, citing that sustainability had been a key element of the Scenic Vision concept.

“This concept car’s production and use are both zero-emission and it is exploring an alternative to all-electric vehicles with a hybrid hydrogen engine that uses batteries that weigh half as much.” 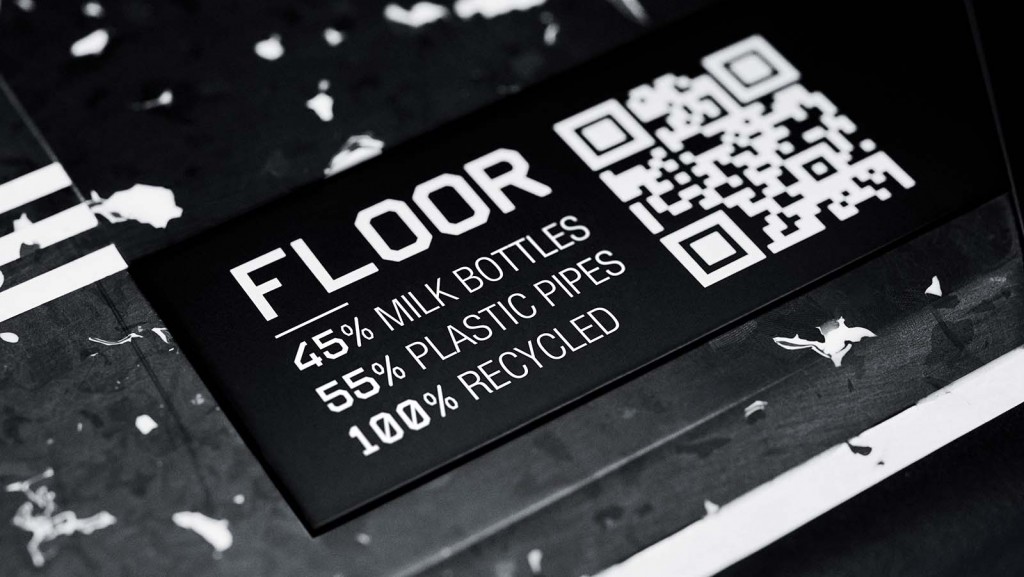 The Scenic Vision is made from 70% recycled materials, of which 95% are recyclable, including the battery.

Designer Vidal added sustainability was key, but said the brand wanted to “dig even further” into what they could achieve.

“After four generations of Scenic the world has changed quite a lot. Everyone can add sustainability, but we have added it visibly through the floor, seats and bodywork,” says Vidal. 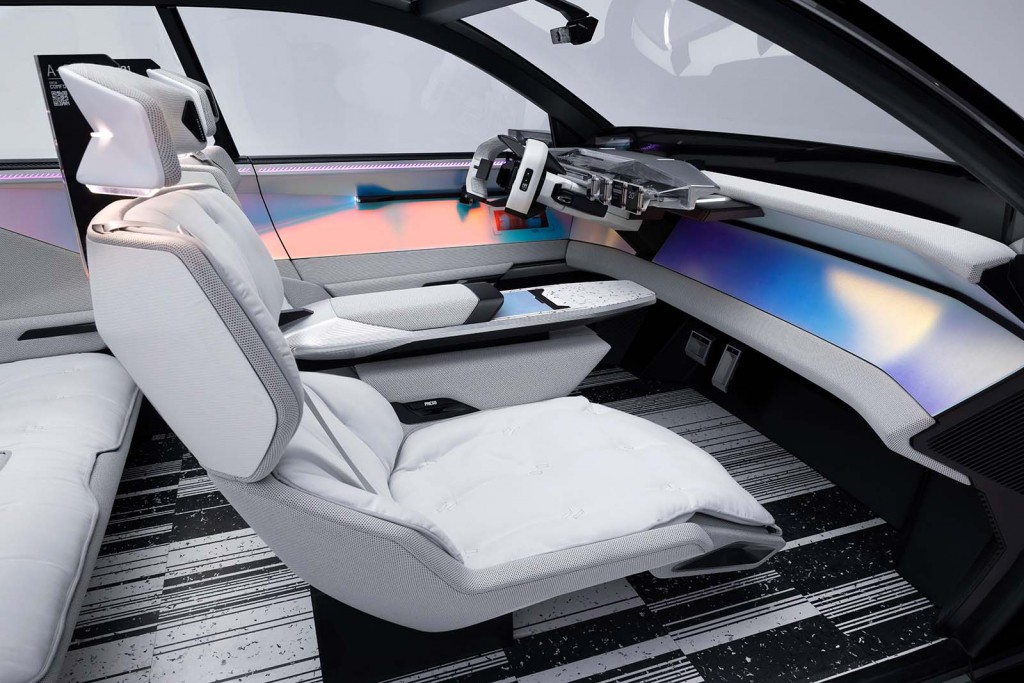 Any cool tech to go with it?
There is plenty of tech inside the Scenic Vision, with an array of systems aimed at improving driver safety. For better visibility the concept features a large transparent screen which spans the width of the dashboard. It displays what is ahead of the car using on-board cameras in the front of the car, which Renault says increases the driver's field of view by 24%.

Continuing on the theme of safety, Renault has added its ‘Safety Coach’ system - a new feature which analyses the driver’s behaviour. 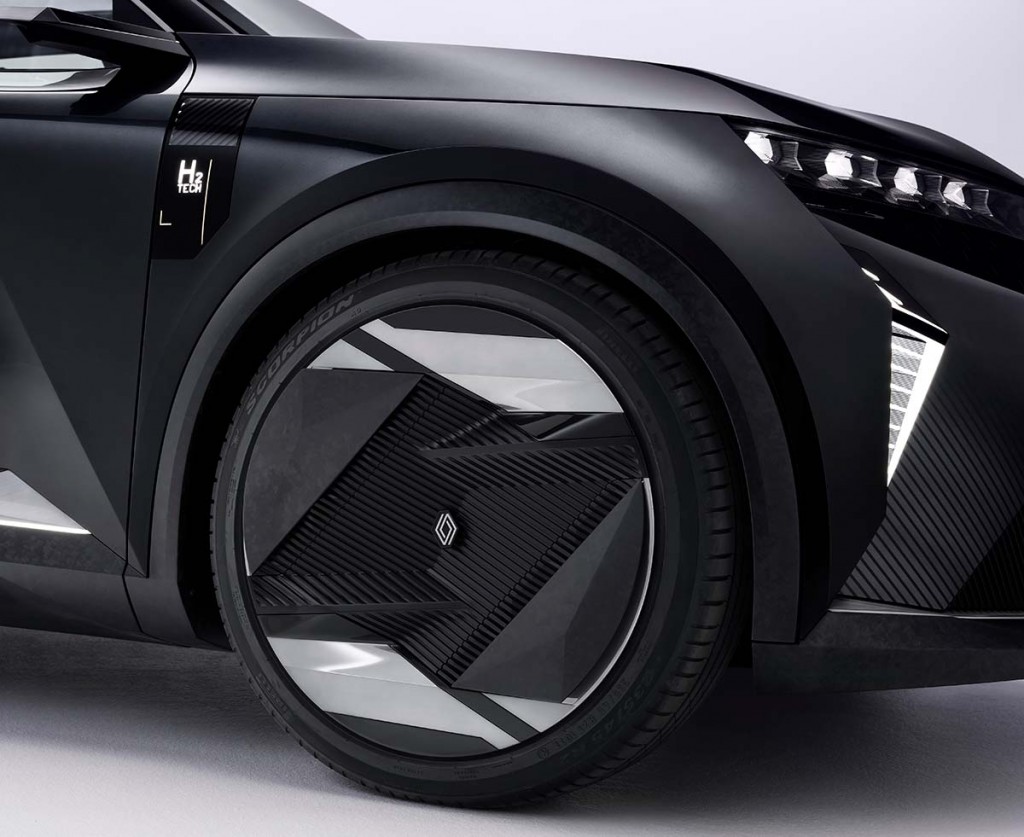 Safety Score analyses the driver’s driving style such as acceleration, smoothness, speed and distractions and gives personalised tips on how to improve.

Safety Coach differs by analysing the drivers environment and uses data from the drivers the car’s on-board navigation system to inform them of risks located on their route.

Renault says the Safety Coach should help to reduce the number of road accidents - fatal accidents included - by 30%.

The final part of the system is the Safety Guardian, which in the event of real and present danger, can take over control of the car. For example, if the wheel is not under control for a prolonged period, the system can intervene and slow the vehicle down. 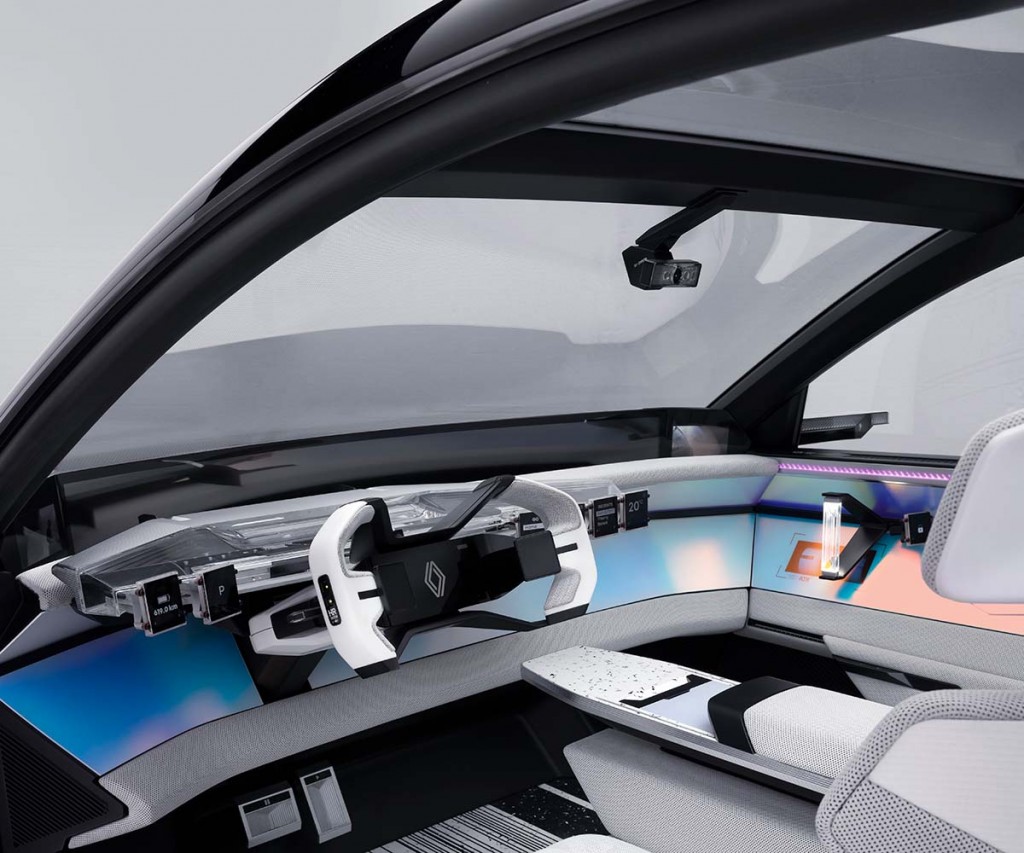 In the centre of the dashboard next to the steering wheel are several configurable widget screens, each of which has a different function. Facial recognition has also been added to allow drivers to customise the interior to their own needs, while speakers in the headrests can also be adapted.

Electrically operated suicide doors tease at the brand’s future high-tech design language. They open by pressing the touch-sensitive Renault logo on the door. There is no B-pillar which Renault says makes for easy access to the cabin. Expect the production version to have a B-pillar though…