Eskuta: the e-bike firm delivering food - and getting results

You might not have heard of Eksuta, but it’s entirely possible that you’ve had your dinner delivered on the back of one of its products. The Nuneaton firm’s unorthodox SX-250 is an e-bike that looks like a scooter – and is fast becoming a favourite of delivery firms.

While Eskuta might not be a household name, many of the companies using its e-bike are: think Domino’s Pizza, Just Eat, Papa Johns, Budgens and more. That’s because the Eskuta SX-250 is almost ideal for urban deliveries: it’s cheap to run, easy to use and low-effort for riders. Which makes it even more remarkable that breaking into the app-based rapid delivery market was a bit of an accident. 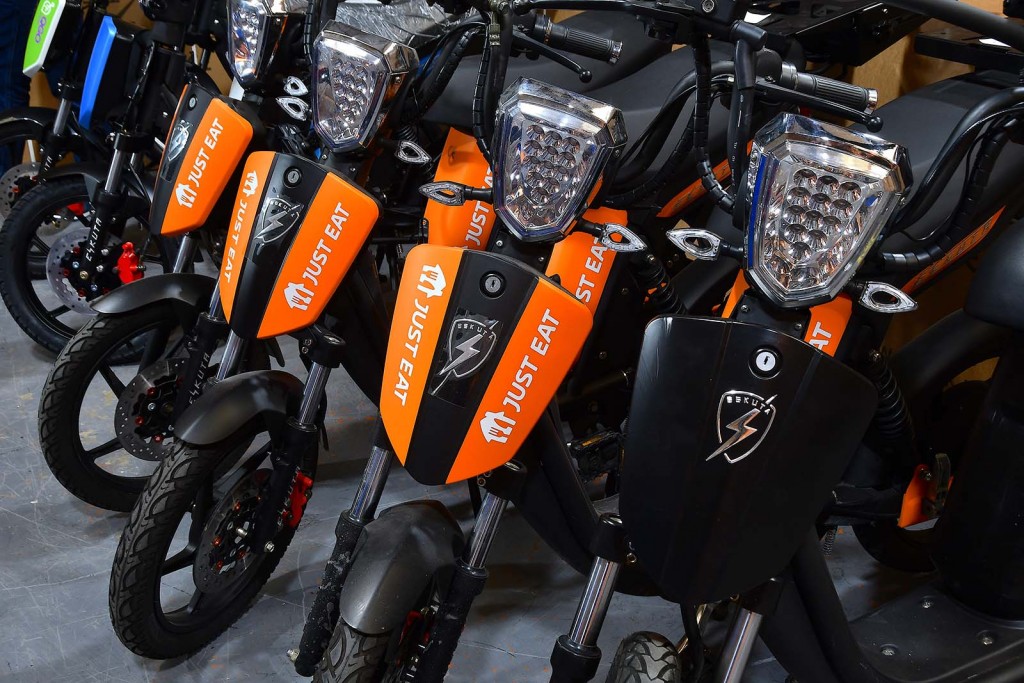 “When I started the business I had this idea that the bikes would be great for commuters and especially younger people to get around on,” says Eskuta founder Ian O’Connor. “So back in 2016 I did a freshers’ fair at a university to try and sell some to students. The stand next to me was the local Domino’s franchise, and one of the guys looked at my bikes and said ‘that would be great for food delivery’. I just went ‘oh yeah…’”.

O’Connor is proud that Eskuta still sells bikes to commuters and students, but the vast bulk of his business now comes from selling cargo bikes for the delivery market. “It sounds very grand, but we’re the UK’s largest delivery cargo e-bike company,” he says.

While that fresher’s fair was O’Connor’s lightbulb moment, it was just one step in Eskuta’s rapid rise. 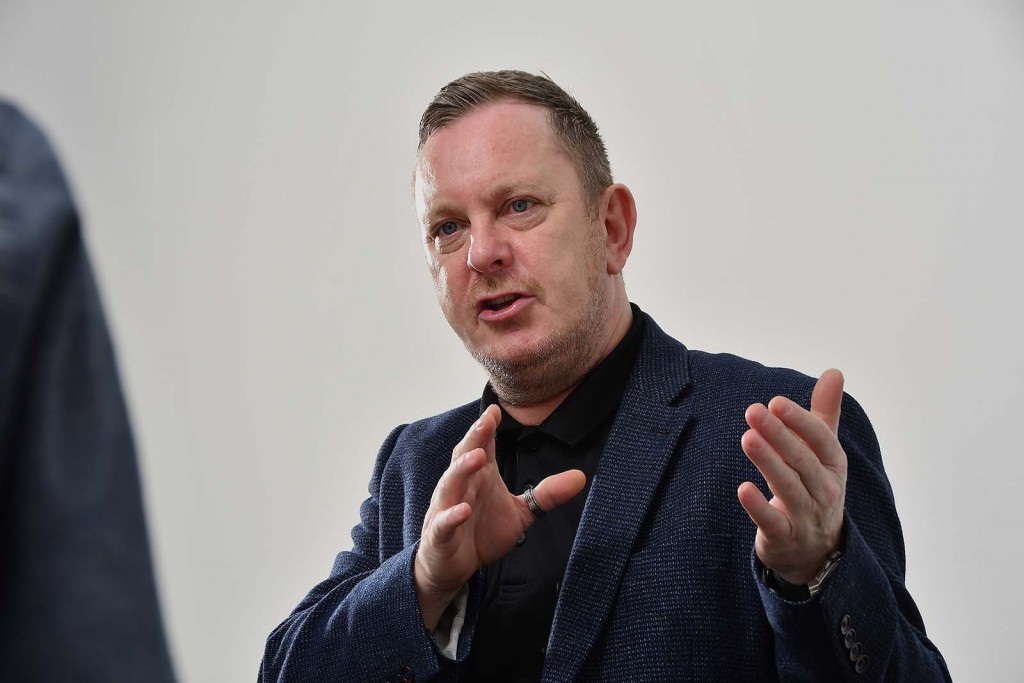 O’Connor is an unlikely founder of an e-bike firm: he’s previously worked in commercial interiors and run his own fashion footwear brand. But it was when visiting a friend in Wuxi, China in 2014 that he spotted an opportunity.

“When I was there I saw loads of people whizzing round on these silent e-bikes in lots of different forms,” he says. “I didn’t know what they were at first. But you could see the potential – and I thought they could be interesting in the UK. So I went to a big bike show in Shanghai, and found a potential supplier.”

By coincidence, the supplier O’Connor found – and still uses today – was based in Wuxi, around 85 miles north west of Shanghai. But he didn’t really want to sell the product that the company was producing. In China, a lot of e-bikes are used to replace petrol-powered mopeds (and, in some cases, bikes that have had engines bodged onto them). That was what O’Connor’s supplier found: it was basically a moped powered purely by a small electric motor. 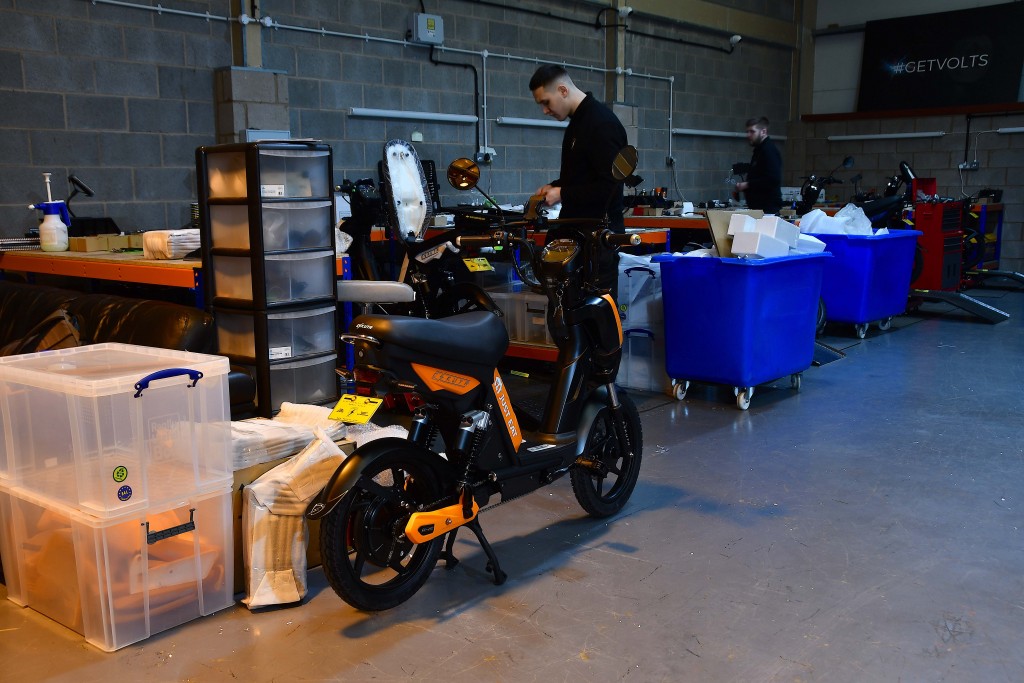 In other words, it wasn’t really an e-bike – and certainly not by UK classification. “It struck me that nobody else was producing a machine that could be classified as an e-bike but had many of the features of a scooter,” he says.

How the Eskuta SX-250 was developed

O’Connor’s solution was to import the bikes from China, and then set up an engineering base in Nuneaton. There, Eskuta engineers effectively convert the electric mopeds into e-bikes by fitting pedals to the drivetrain system.

The 250W motor will only engage when those pedals are turned. With speed capped at 15.5mph and no throttle pedal, that means they are classed as pedal-assist e-bikes – and that means they don't need tax, MOT or insurance.

The modifications Eskuta has made to its e-bikes don’t stop at adding pedals either. “Once we started breaking into the delivery market we did a lot of work to strengthen the design, making it more robust and reliable,” says O’Connor. “We’ve designed our own parts using CAD-CAM, strengthening areas and adjust to the needs of the UK.”

Eskuta has just launched the third-generation of the SX-250, and while it might look similar to the first generation, O’Connor insists it is unrecognisable in terms of mechanics. In fact, Eskuta has modified the design so much that it now owns the IP; that Wuxi firm now builds the bikes to Eskuta's specifications.

“I wanted a product that we could develop all the way through, rather than having to keep reinventing things,” he says. “That’s really helped, because we’ve really learned what our customers wanted, and adapted our product to fit.”

After gaining the interest of his local Domino’s franchise, O’Connor was quick to realise the potential of the last-mile delivery market – both for food and for shopping. 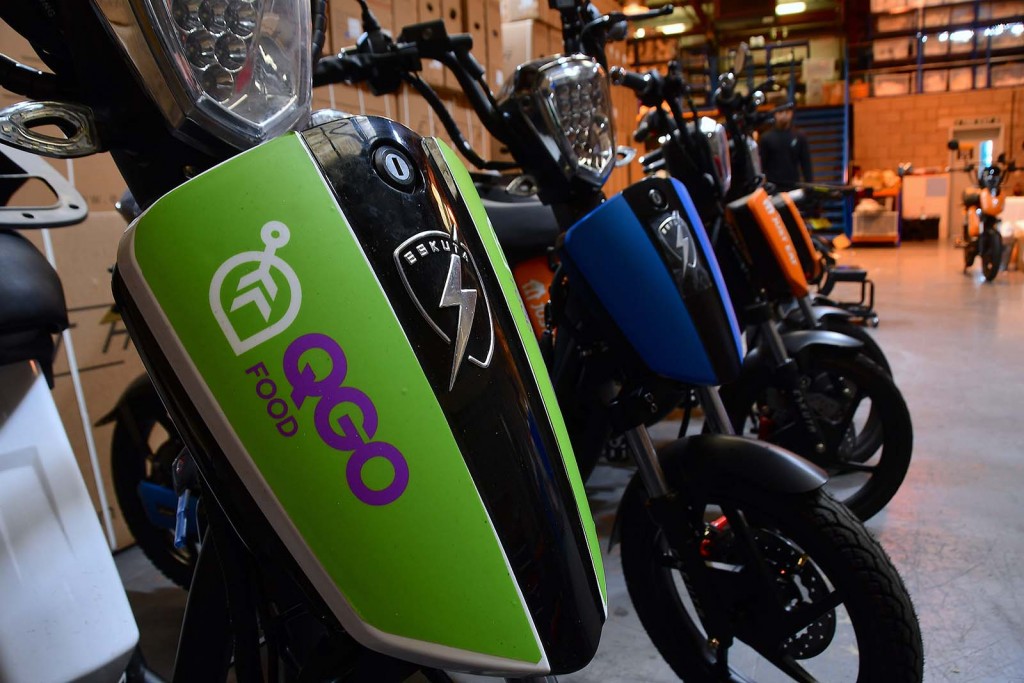 “In most situations the SX-250 is much faster than a car, and at least as fast as a moped,” says O’Connor. “Traffic is really slow in cities, and unlike mopeds our machines can use bike lanes. And anyone aged over 16 can drive them, so businesses don’t need to find riders who have done a CBT bike course.

“Money is tight, too, and they’re cheaper to buy and run than a moped – and better for the environment, too.”

O’Connor says that simplicity has been key to helping scale the business. Noting that some firms introduce new colours of bike each year, O’Connor notes the body of every SX-250 is black – and they can then fit coloured panels. Those can be easily matched to the colours of the firm buying the bikes (O’Connor proudly points to a row of purple-liveried bikes for Birmingham firm DelivrMe, which was colour-matched from a Lamborghini…). 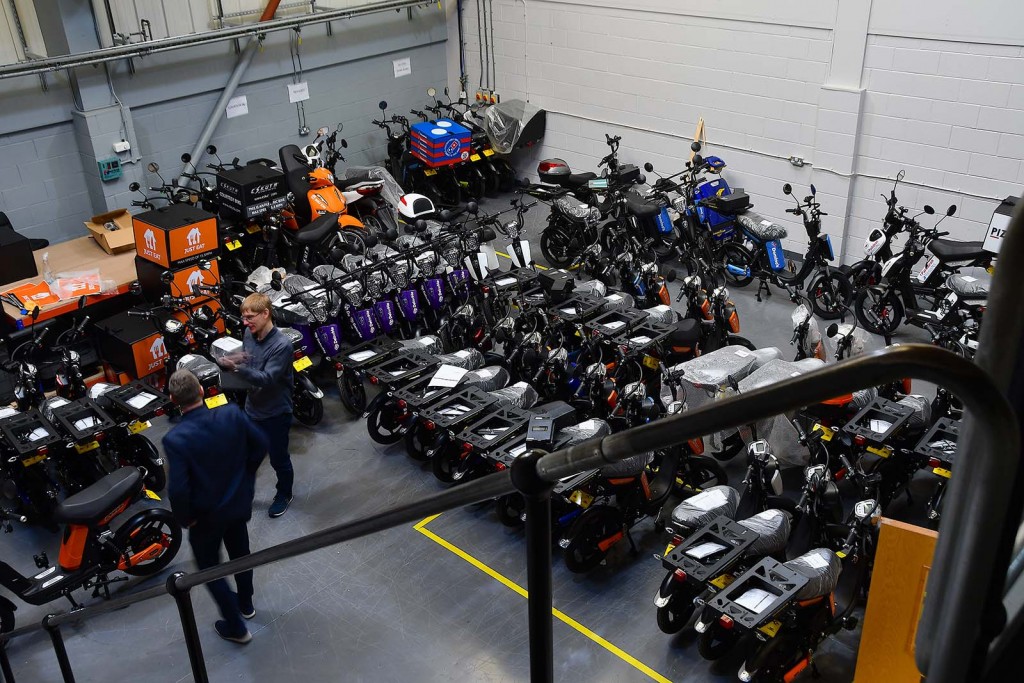 Eskuta is also built around something else appealing to delivery firms: it deals direct with them. Every machine is still prepped in Nuneaton before being delivered by Eskuta, and the firm also handles servicing and repair in-house. That helps make it cost-effective for firms, and means Eskuta can keep learning about the lifespan of its products.

That lifespan might be longer than expected, too: O’Connor has a client who has racked up 12,500 miles on an SX-250, which the only major expense a replacement battery. And if something does go wrong, O’Connor vows Eskuta can deliver a replacement part tomorrow. 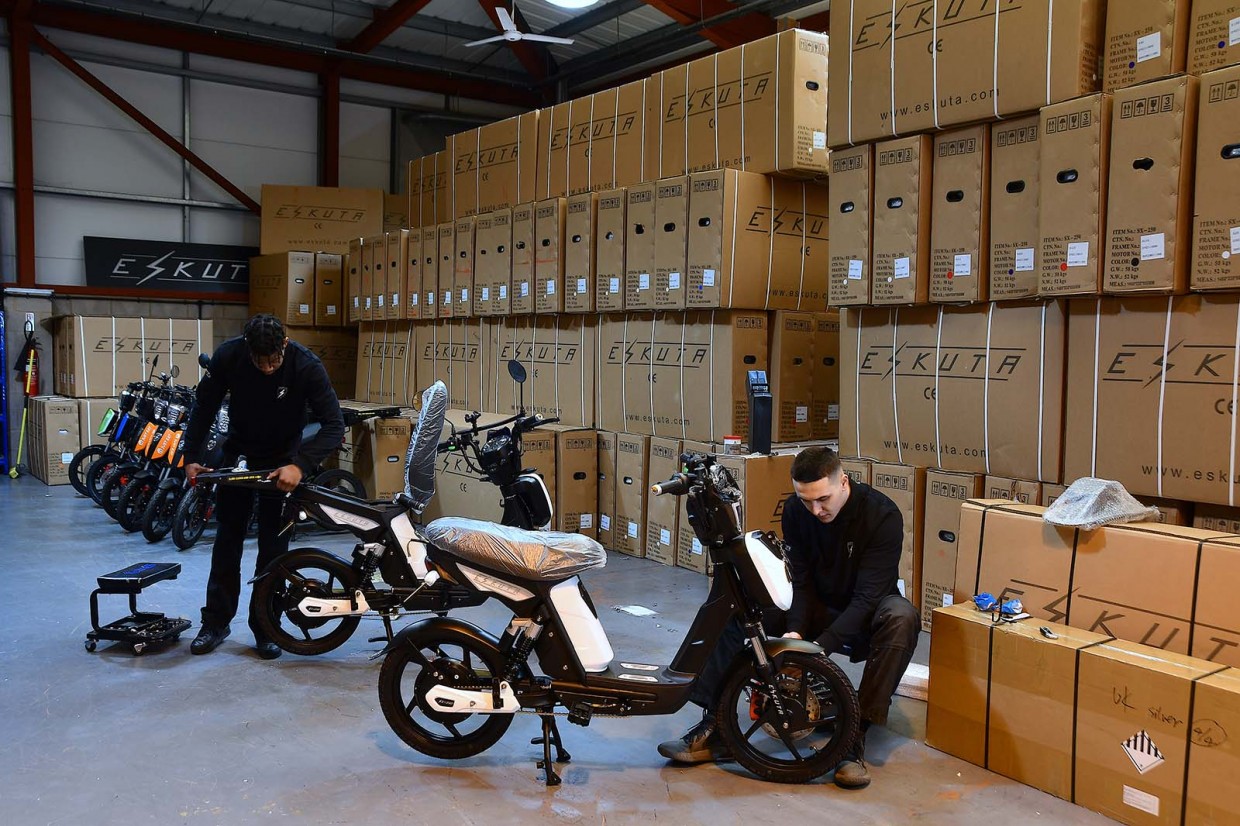 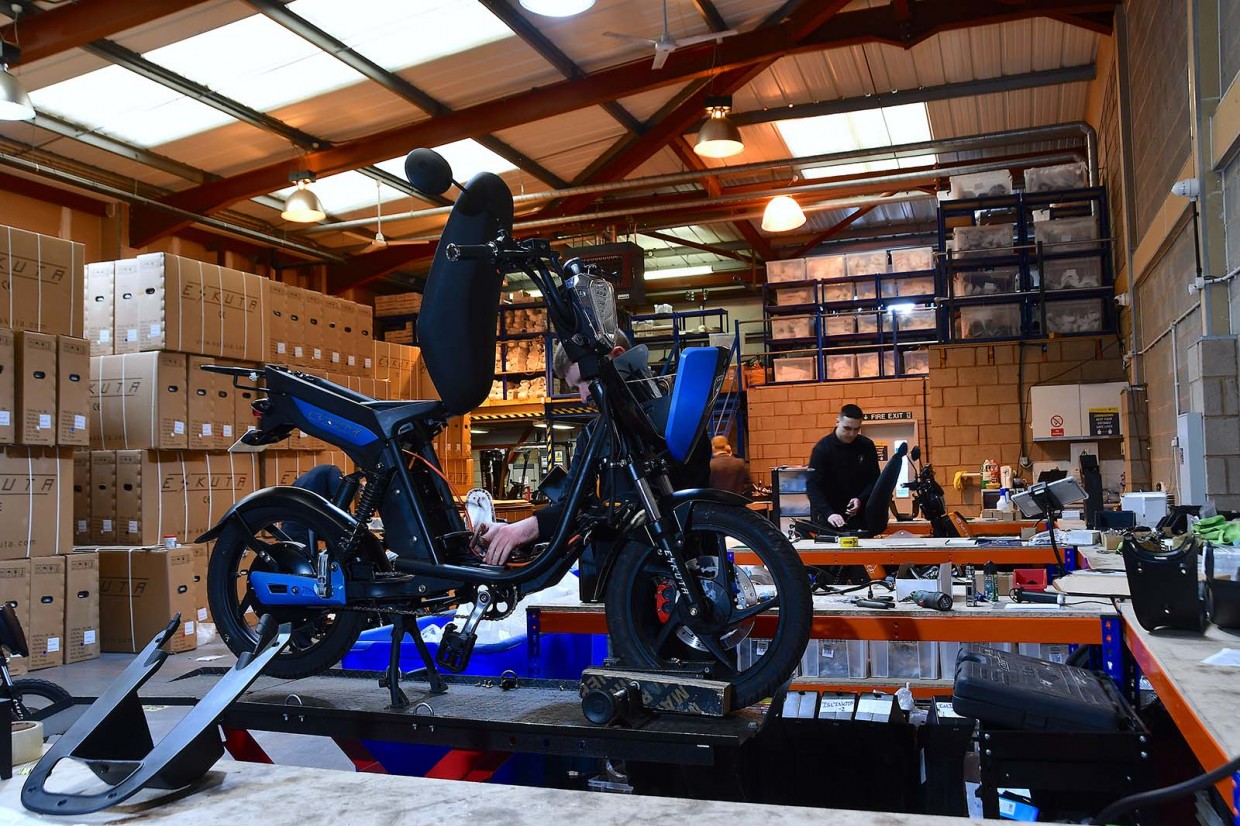 While the SX-250 D now accounts for the vast bulk of Eskuta’s business, the passenger SX-250 has also grown an appreciative audience. The firm is looking into new business areas there, too: it’s about to start a trial with a fleet of bikes on a large, campus-style hospital that will be available for doctors and nurses to quickly get around.

The firm has also launched its first e-scooter, the Eskuta KS-450. That was an opportunity that came via a European distributor. “You can see the e-scooter market is coming, and it dovetails well with the e-bike business,” says O’Connor.

In the UK, of course, it is illegal to use private e-scooters on public roads, and O’Connor is somewhat gambling that the British government will eventually legalise them. To that end, he’s made sure the e-scooter has a top speed of 15.5mph to broadly match the rules governing rental e-scooters.

For now, though, meeting demand from the food delivery market is occupying much of O’Connor’s time. With that market continuing to grow, there’s opportunity for Eskuta to do likewise. Something to chew on, next time you have a takeaway. 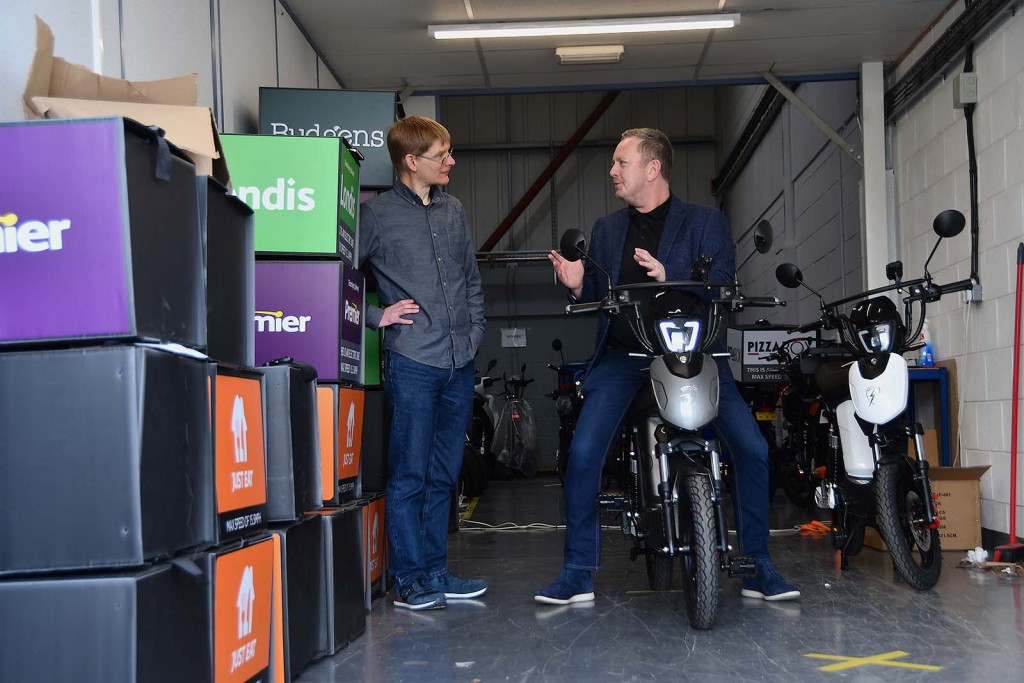