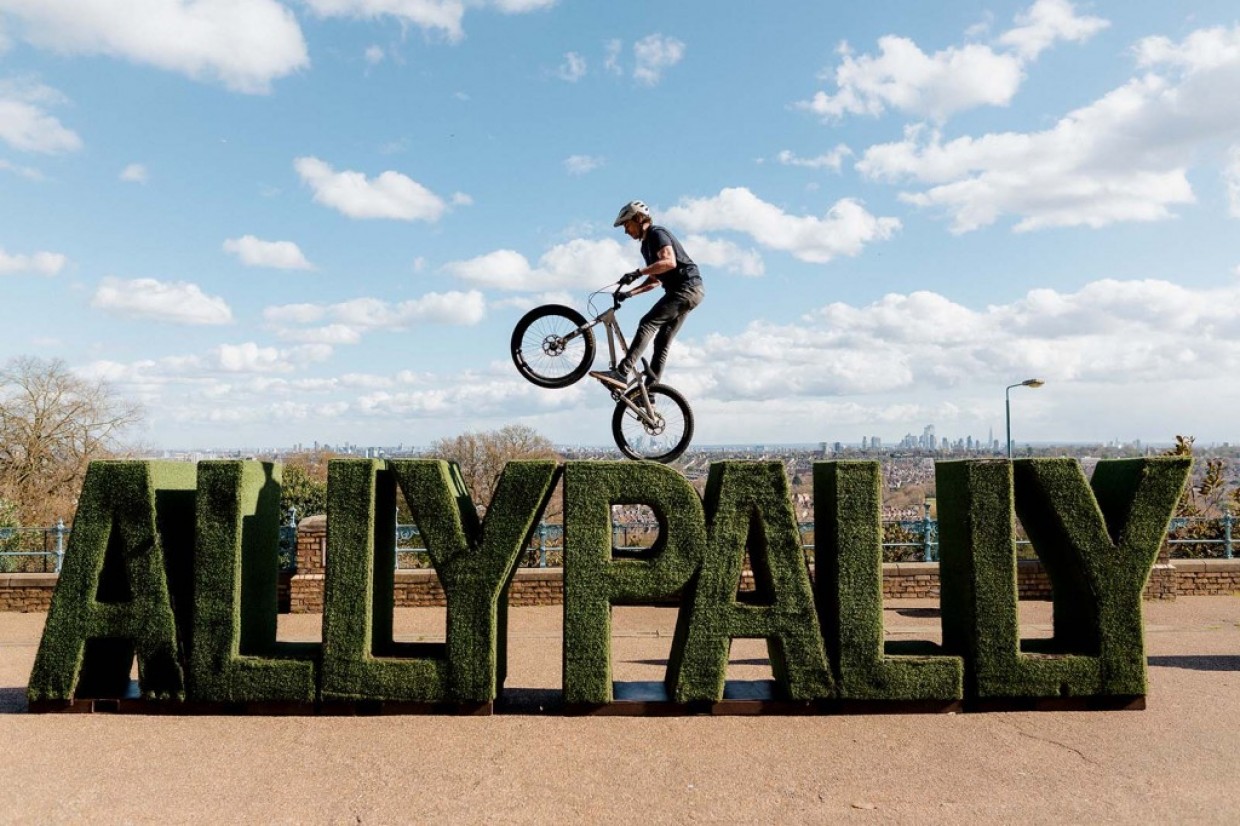 The first London eBike Festival was held as part of The Cycle Show at Alexandra Palace recently. Naturally, the Move Electric team was on hand to suss out some of the new and exciting bikes and technology the industry is launching in the coming months.

Read on for our selection of standout bikes and technology from the first edition of the London eBike Festival.

Mycle Cargo Bike
Still a relatively young brand, Mycle has ventured into the world of electric cargo bikes with a rather ‘cheap’ sub £2k option. As the brand’s ethos is largely around making electric bikes affordable, it’s interesting to see it tap into the family market with this rear loader. There are accessories galore for customers to adapt to their riding needs, and a seven-speed Shimano groupset to keep you pedalling up hills.

Mycle has also adorned the Cargo with their biggest ever battery at 15Ah, which it claims will give you a range of up to 37 miles. There is an option to use two batteries if you need the extra mileage. It looks like an affordable option for families on a budget, but we'll have a full review of it soon so keep your eyes peeled.

Mycle also showcased an updated version of its Compact bike, the Compact Plus. This is a folding bike available at £1299 and the Plus comes with a bigger 10.4Ah battery to provide more range than its predecessor. 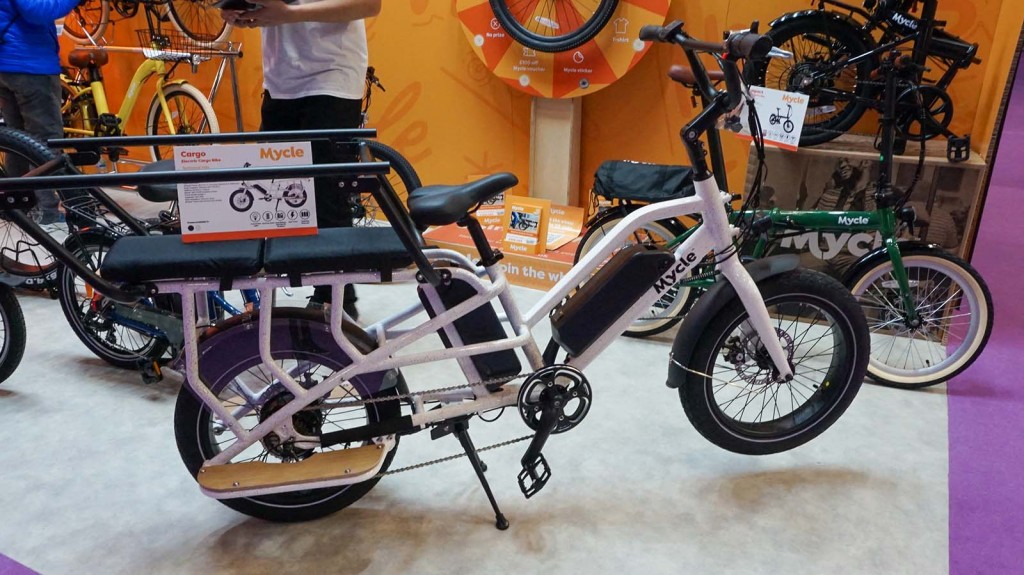 Cooper Bikes UTY
The entire range of Cooper Bikes is quite impressive, with such minimalistic design, but the new UTY (standing for utility) bike caught our eye. Charlie Cooper – the son of Mini tuning legend John – was on hand to explain how much fun it is to ride across London. Besides the striking look of the frame, which reminded us of cruiser and BMX styling, it's full of impressive tech. Although, it won’t be using the KERS technology seen on the other bikes in the Cooper arsenal.

Cooper Bikes has plans to release several versions, all with the same frame but slightly different component specifications. The prize for the most ‘fun’ bike to ever have Shimano Di2 might need to be awarded to the UTY, just based on the look of it. Of course, it’s called a utility bike so the front rack helps with the usefulness of the bike, allowing you to carry your belongings safely on the bike. 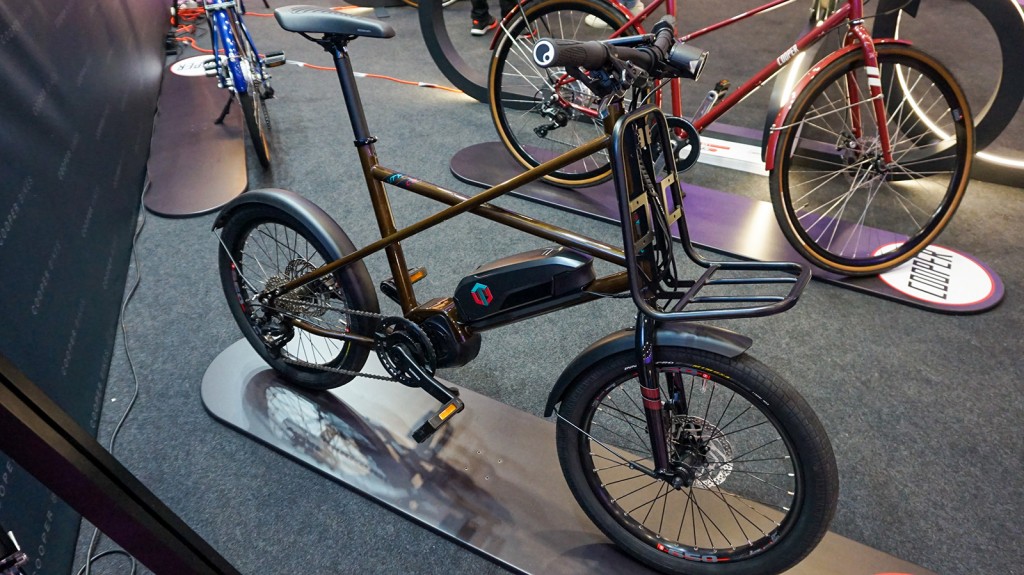 Bosch Smart System
This could warrant an entire article in itself, but the new Bosch Smart System is set to be a big step forward for the German brand. At the show, it displayed its updated Performance Line CX motor, the Kiox display, an LED Remote, and a new 750Wh PowerTube battery.

The firm was also on hand to demonstrate the eBike Flow smartphone app, which now contains a whole host of functions including navigation, and the ability to download updates to your bike over the air. This is impressive as previous updates had to be done by a Bosch dealer. Bosch is giving riders the ability to choose between using their smartphone as an almost cycling computer device, or using the Kiox display for their riding stats.

The LED Remote can be used on its own without any display, and controls the assist levels, with different colours on the LED depicting different assist and battery levels. If riders do want to use their smartphone, they can safely attach it to the bike using the new SmartphoneGrip phone holder, specially designed to work with the Bosch system.

Expect to see this system on some 2023 models soon, but be aware that the new motors and batteries won’t be compatible with older Bosch e-bike systems. 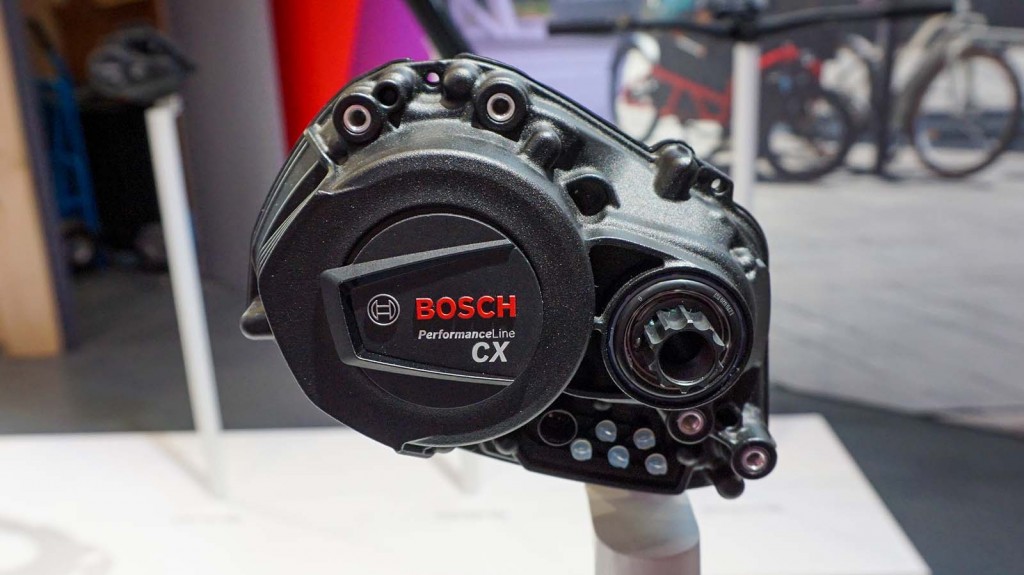 Vello Bike+ Titanium
We'll admit, we were lured in by the big '9.9kg' weight claim by Vello, which is rather impressive for an electric bike. The bike in question is the Vello Bike+ Titanium, complete with a carbon fibre finishing kit like the seatpost and handlebars. Besides the weight or lack of, the biggest claim from Vello is that the bike is 'self-charging'.

By this they mean it uses a KERS system, which essentially charges the battery under braking or when you go downhill. It's an interesting concept, seen frequently in electric cars and use with some of the Cooper Bikes. The Bike+ Titanium is also foldable, but not in the traditional mid-framed hinge way, meaning it looks quite sleek and not entirely obviously a folding bike. 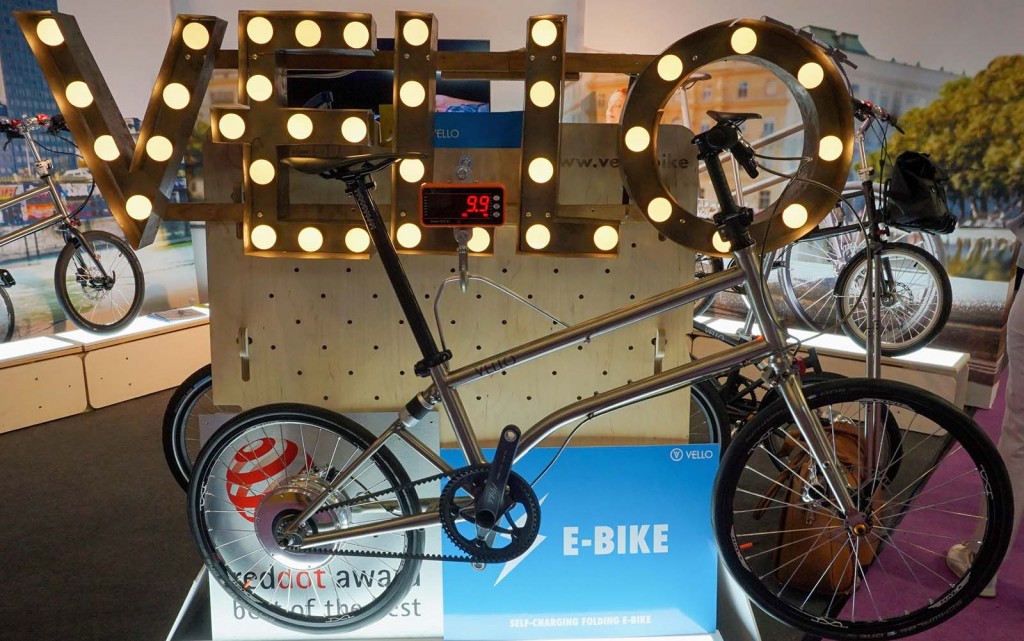 Gocyle G4i+
If you think you’ve seen this one before, you probably have. It’s not a new model, but it is the top of the G4 range that has been catching eyes for a little while. We tested the G4 but the G4i+ comes with carbon fibre PitstopWheels, daylight running light bar on the handlebars, and a carbon fibre mid-frame. All of which lowers the weight but ups the class of an already very sleek folding bike.

It would be hard to improve on the G4i+, so we understand Gocycle's approach of introducing small upgrades to it rather than launching an entirely new model every time there's something new. 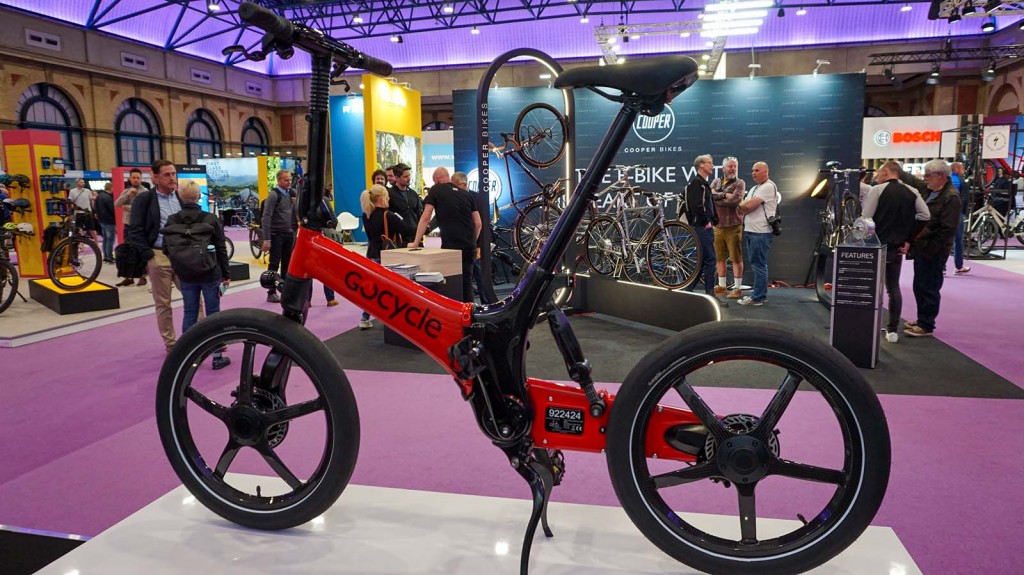 MiRiDER One Platinum Show Edition
We may have already reviewed the MiRider One, but the British brand brought a very special model to the show. The Platinum Show Edition custom graphics were specially created for the event, and the bike included hydraulic disc brakes, a colour display screen, riser handlebars, a Selle Royal saddle, and CNC pedals. Only a handful of these models were made (with five left at the time of writing) and are available exclusively on the MiRider website for £2,100.

Great for leisure rides and urban trips, it's a versatile bike and with some new tech additions, it's an even more attractive choice. 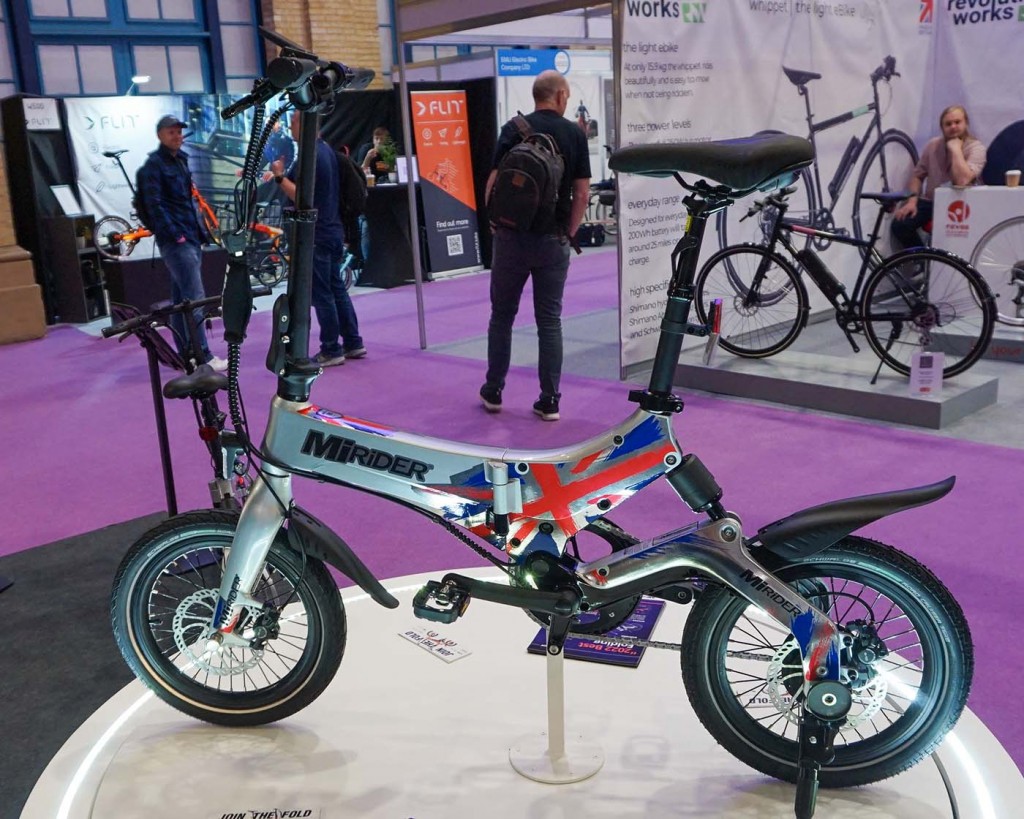