No snowing this e-bike down: meet the homemade cargo e-bike snow plough 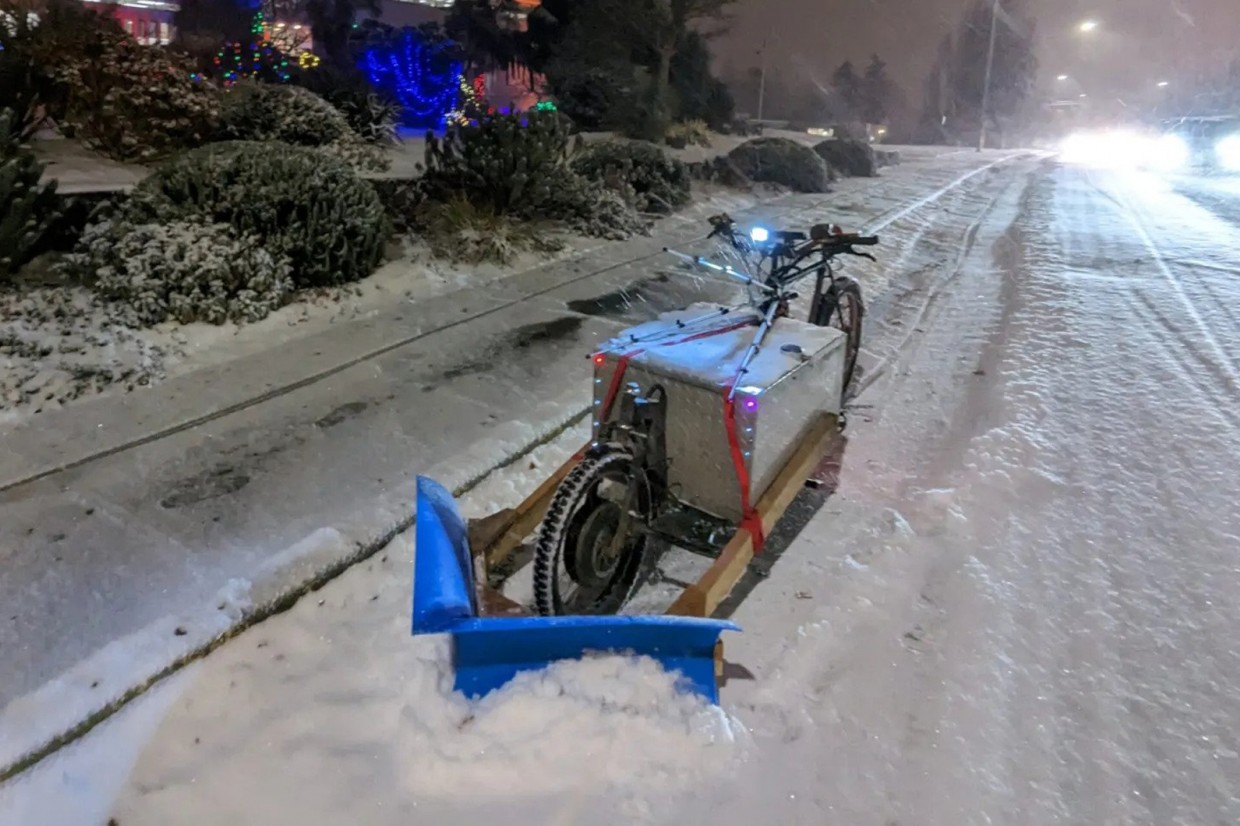 Here’s yet more proof that electric cargo bikes can do pretty much anything: an enterprising Canadian has turned his cargo e-bike into a snow plough.

The cargo e-bike snow plough is a creation that would make both Mr Plow and the Plow King jealous, and is the brainchild of Phil Marciniak, who lives in Saanich, located just outside Victoria on Vancouver Island in British Columbia.

The latest e-bike news, whatever the weather: it's the Move Electric newsletter

Marciniak runs a cargo e-bike company called Sustainawave, and when many of the roads, bike lanes and pavements in Saanich were left impassable after a recent heavy snowfall he decided to adapt one of his machines to help out.

Having been working on the concept for just over a year, Marciniak has experimented with a range of different front ploughs, and has now settled on attached two shovels, which are angled outwards and mounted via a plywood attachment on his e-bike’s cargo hold.

The plough took around an hour to assemble, and Marciniak told Move Electric that he’s so far travelled around 15 miles on it in heavy snow conditions. Check out this video he filmed to see it in action.

Marciniak recently showcased his creation with a trip of several miles during a recent heavy snowfall, reaching speeds in excess of 12.5mph despite the conditions. And what prompted such speed and creation? Vietnamese food, apparently. Marciniak wanted takeaway, but his local restaurant wouldn’t deliver in the conditions.

Marciniak added that he felt the need to create the machine in part because while the local councils plough the roads they don’t treat the pavements or bike lanes – and in the conditions he didn’t feel it was safe to cycle on the road with cars.

“We absolutely have issues with snow being dumped onto sidewalks and bicycle lanes,” Marciniak told Move Electric. “Most municipalitities here in BC, and dare I saw North America at large, are still firmly entrenched in 1970's style car brain thinking. Even a "progressive" municipality like the one I live in has absolutely dropped the ball for cyclists and pedestrians during this current snow storm.”

Admittedly, there’s unlikely to be a huge market for cargo e-bike snow ploughs in the future, and even if there is they’re unlikely to become a major fixture here in the UK. But the recent heavy snowfall in the UK did lead to several people highlighting examples of councils failing to keep pavements and bike lanes clear of snow – so perhaps there could be demand…