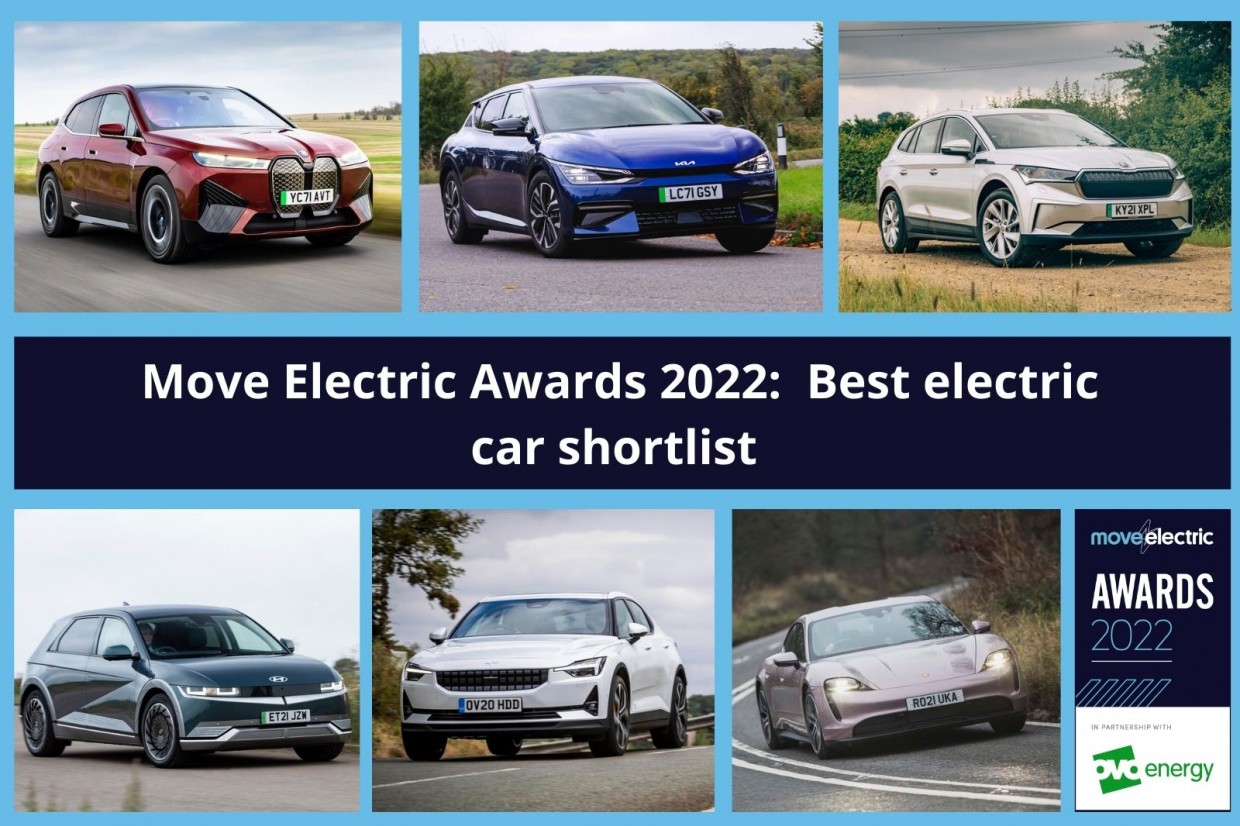 You only have to go back around a decade, and it would be hard to list six credible electric cars. So it’s a real mark of progress that it was incredibly hard to narrow down the contenders for the Move Electric Awards 2022 in partnership with OVO Energy best electric car prize to these six contenders.

From small city cars to large premium SUVs, the diversity of electric cars now offered to UK buyers is incredible. For our best electric car, we were looking for a machine that pushed forward the possibilities of EVs, while also offering a great machine for anyone looking to buy in the here and now.

The bold front styling of the BMW iX might be, erm, divisive – but the big SUV’s many attributes are impossible to debate. The machine was conceived as a true technical flagship, and it delivers on that with the use of incredible technology and a blend of high performance, impressive range and huge amounts of space.

The iX sits on a bespoke new EV platform, and is underpinned by smart software and systems. That includes a high-tech dashboard that mixes digital screens with the excellent iDrive control system.

While the big SUV might be brash on the outside, for those inside it’s a car of real subtlety and refinement. It’s really quite inside, and the car just glides along on specially tuned suspension. It’s great to drive too, and remarkably nimble for its size.

It’s certainly not cheap, especially if you want the larger xDrive 50 with the 105.2kWh battery. The xDrive 40 starts at £69,905, but you can quickly reach six figures if you start going up the specs and trim levels. Still, you’re getting a premium car that certainly feels like the flagship it was intended to be. 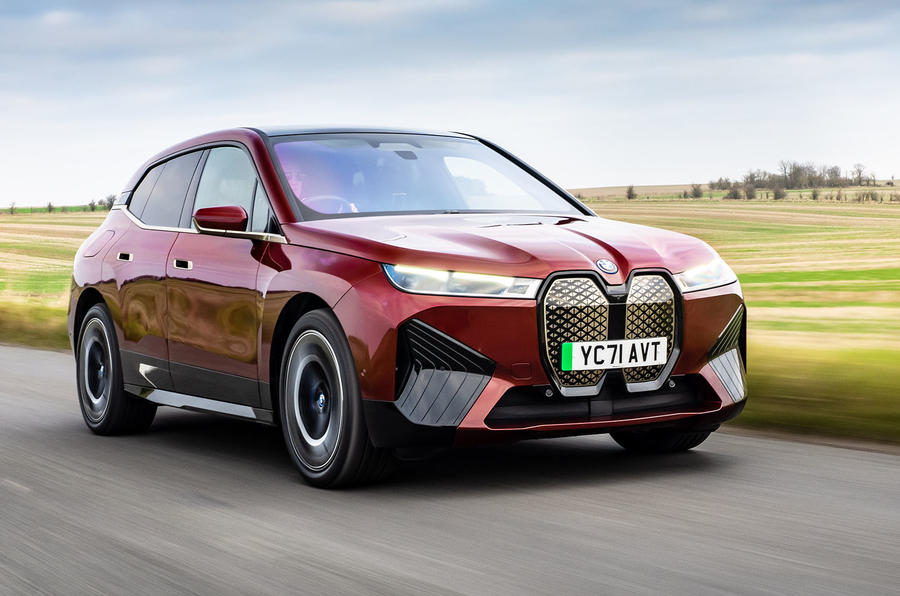 Hyundai has made some genuinely impressive EVs in recent years, but the Ioniq 5 feels like a huge leap forward – not just for the brand, but mainstream electric cars in general. The machine was the first to be revealed on the Hyundai Motor Group’s advanced E-GMP electric platform, which features an 800V architecture - allowing for super-quick 350kW charging speeds.

But the Ioniq 5 didn’t just win support from our judges because it has a fast-charging battery. It looked pretty good, for starters: we love the Lancia Delta-esque exterior styling, even if the Ioniq 5 is really a large SUV. It’s sharp and head-turning in all the right ways: it draws attention without being showy.

The flat E-GMP platform means there’s loads of room inside, and the well-designed dashboard and cabin is slick while also being practical and comfortable. And it’s good to drive too: while the ride can be a bit brittle it’s a calming and relaxing drive. It’s softer and a bit more floaty than the closely related Kia EV6 (spoiler alert: see below), but your preference will likely depend on taste.

While the Ioniq 5 doesn’t have the range to match some of its direct class rivals, those super-fast charging speeds means that’s less of an issue than it might be, and few drivers will really find that a problem on a regular basis. 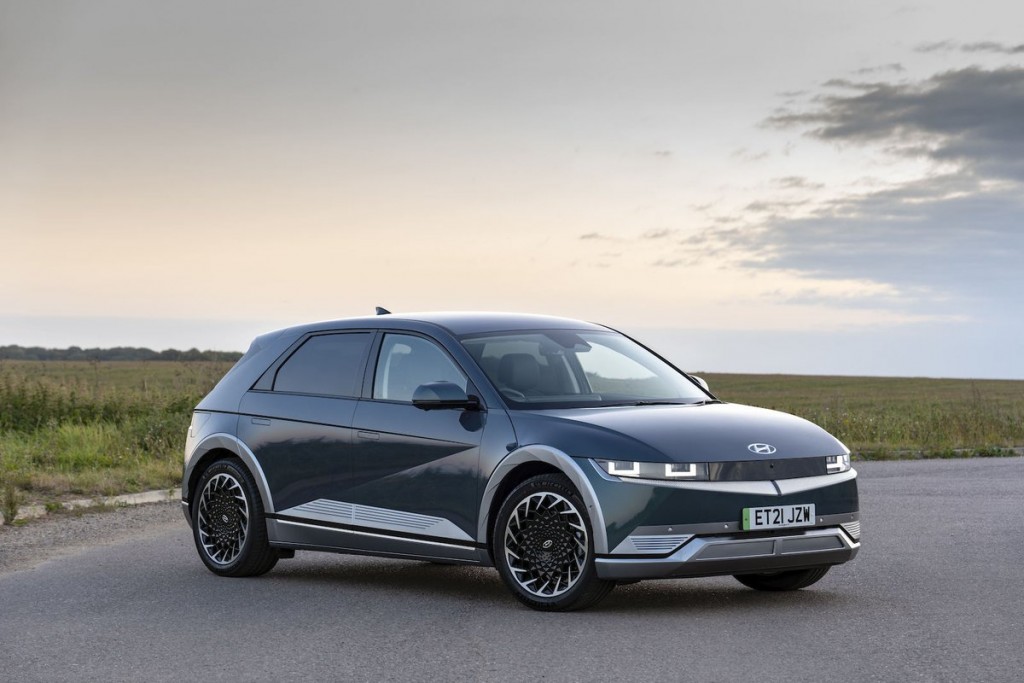 That the Kia EV6 joins the Hyundai Ioniq 5 on this shortly is a testament to the strengths of the Hyundai Motor Group’s E-GMP platform that underpins both machines. But don’t think they’re the same machines with different bodywork and badges on.

The EV6 certainly has distinct styling, and really feels like a huge step forward for the brand. It feels as sleek and striking as the design of any of the premium rivals that Kia is attempting to lure buyers from with this car.

In the UK it’s only offered with a 77.4kWh battery, which offers a credible official range of up to 314 miles – and the advanced E-GMP platform means it can be charged at speeds of up to 350kW.

Kia has gone for a more dynamic handling style than the Ioniq 5, and while that does compromise the ride a little it’s a decent steer for an electric SUV of this side. Essentially, it’s a car that can rival more expensive electric machines for dynamism, without compromising on space and practicality. 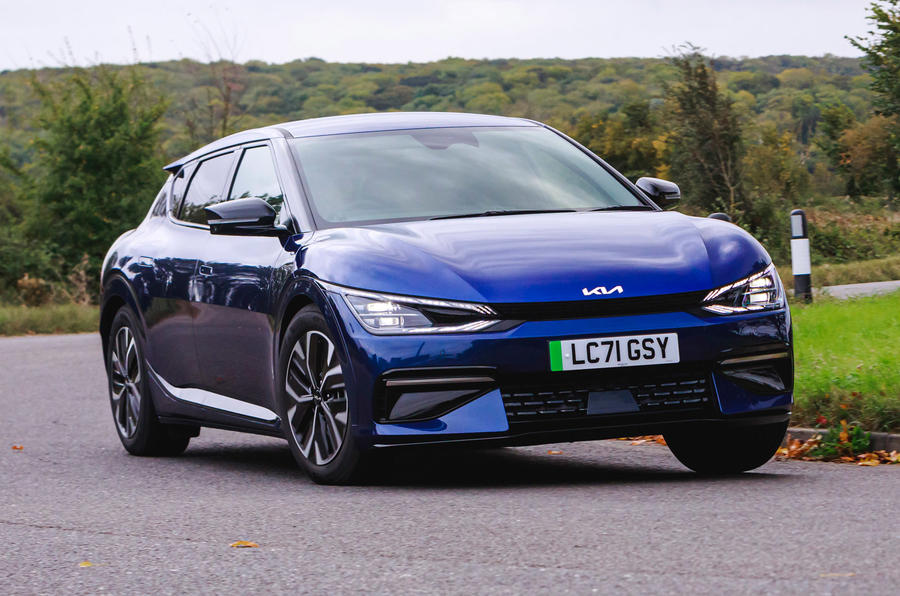 While the hybrid-electric Polestar 1 a limited-run halo car, the Polestar 2 is really the first ‘proper’ model from the new Volvo spin-off performance brand – and the firm has pretty much nailed it first time. It’s a stylish, premium family car that mixes great looks, good driving dynamics and a decent range.

From the moment you first take to the wheel of a Polestar 2, it’s clear this is an EV with a rare blend of agility and pose, yet while retaining impressive comfort and refinement when you’d rather just cruise around.

Opt for the Long Range Single motor version and you’ll be able to achieve 335 miles on a charge - or you can pick the Dual Motor version and enjoy a twin-motor 300kW (402bhp) powertrain. 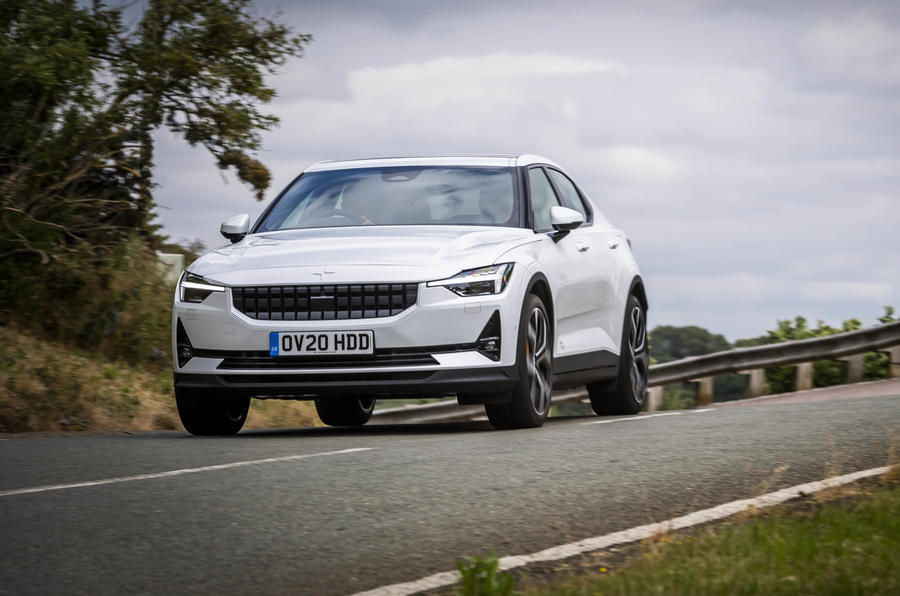 Porsche might sell far more SUVs than it does 911 sports cars these days, but the Stuttgart firm’s badge still carries expectations – so there was plenty of pressure on its first EV. And the Taycan absolutely hasn’t disappointed.

The Taycan meets every expectation you might have of a Porsche grand tourer, with incredible styling, strong handling and incredible levels of performance. It’s offered in various power outputs, including the top-spec Turbo 4S - yes, it’s called a turbo even though it quite obviously doesn’t have a turbo fitted - with a twin motor, 350kW powertrain.

You can choose between two battery sizes, with the largest 93kWh unit offering a range of up to 281 miles. And the 800V architecture of the Taycan’s electric platform means it can be fast-charged at speeds up to 270kW (if you can find a 270kW charger, that is).

Oh, and if you want added practicality from your electric Porsche, you can also choose the Cross Turismo body – an estate, basically. But what an estate it is.

While the Taycan’s stats leap off the page, this is far more than a numbers-driven performance car though: it’s a real statement of progress of electric technology, and has set an incredibly high benchmark for future performance EVs to clear. It’s not just a great electric Porsche: it’s simply a great Porsche that happens to be electric. 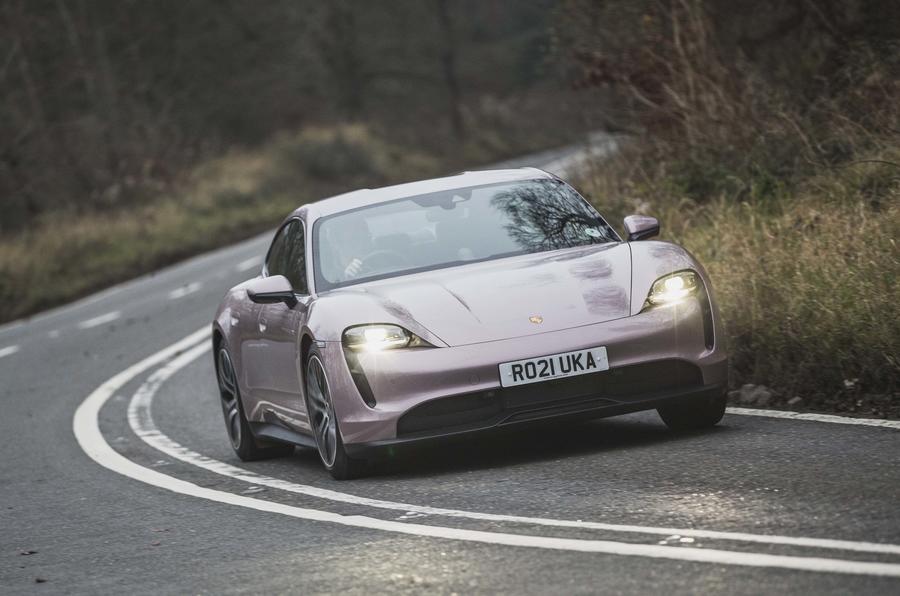 Skoda has a well-established formula that has helped it achieve great success in recent years: sensible, practical cars with loads of space and clever features that represent excellent value for money.

That formula clear hasn’t changed for the electric age: the Enyaq IV is a large, spacious SUV that is competitively priced, larger than most rivals and pleasing to drive. It’s the sort of machine that blends into the background of everyday life, but for all the right reasons.

It’s more spacious than the closely related Volkswagen ID 4 – both are built on the VW Group’s electric MEB platform – and a choice of two battery sizes (58kWh and 77kWh) allows buyers to choose their preferred blend of cost and range. The larger battery allows for a range of up to 331 miles. Meanwhile, the interior is immensely practical, while adding an extra dash of style and premium feel. 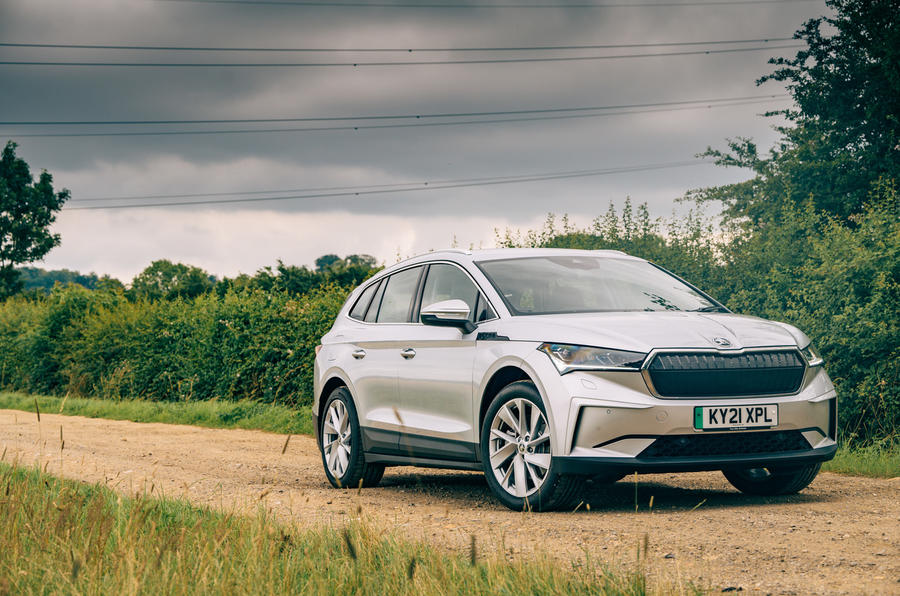