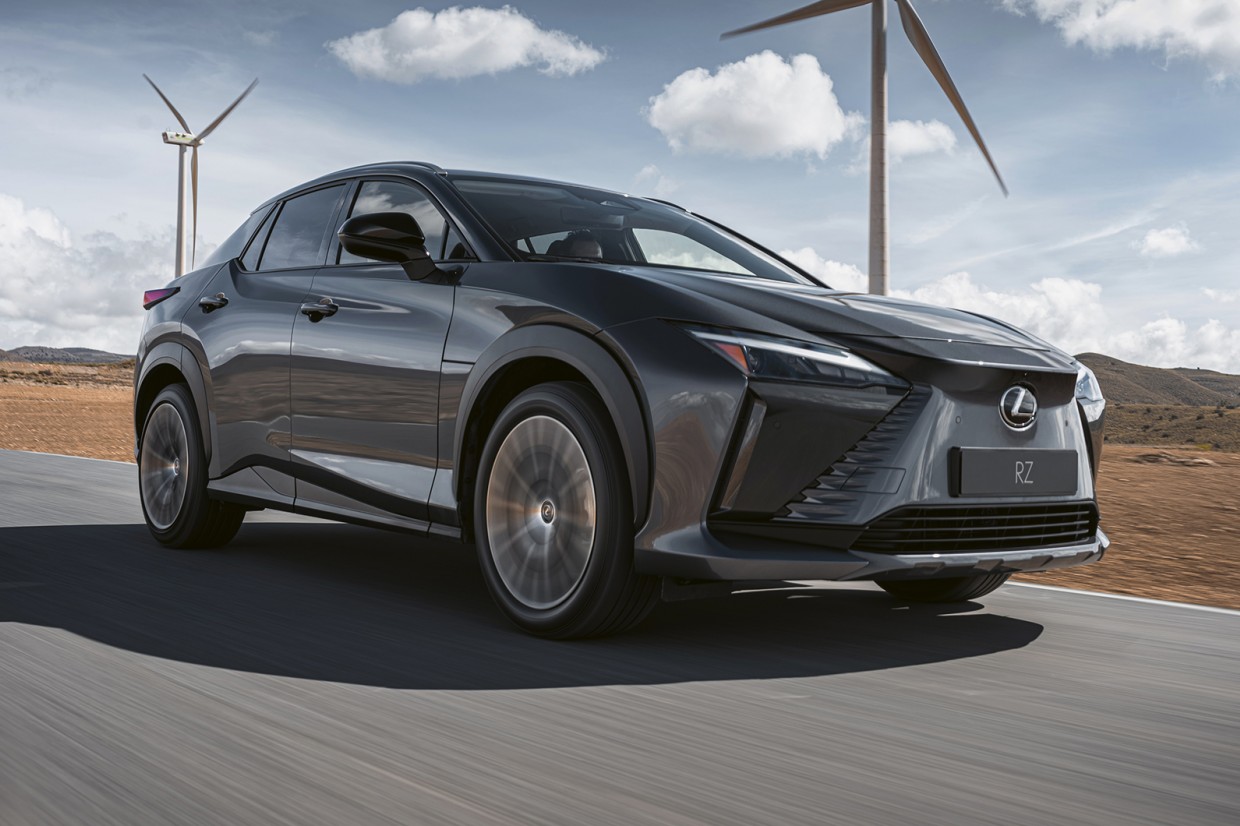 The new Lexus RZ 450e is the firm’s first bespoke electric car, and will spearhead a new wave of performance-oriented premium models from the Japanese firm.

The new SUV from Toyota’s premium brand will actually be its second electric model, following the smaller Lexus UX 300e. But while that model used a multi-powertrain platform, the new RZ 450e uses Toyota’s electric-only TNGA platform. That will also be used by the new Toyota bZ4X, which you can probably tell from some of the design similarities. 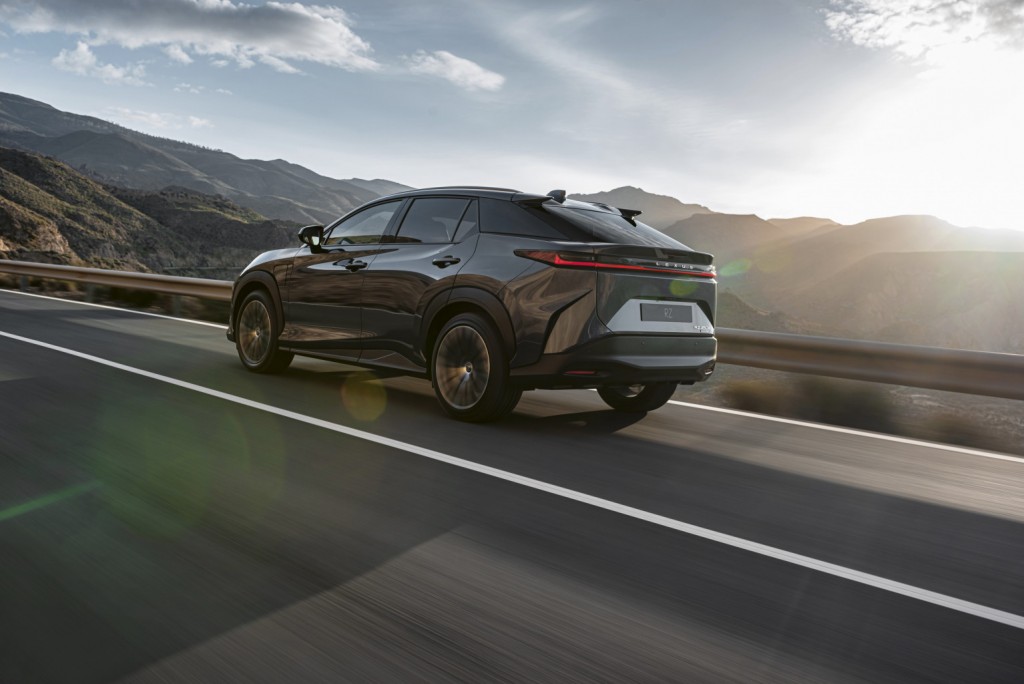 Don’t be fooled, though: Lexus insists that the RZ 450e features a raft of brand-specific technologies designed to showcase its ‘signature’ handling and performance, as well as luxury Japanese craftsmanship. Notably, that includes an options steering yoke that replaces the conventional wheel.

It’s set to arrive in the UK towards the end of the year. 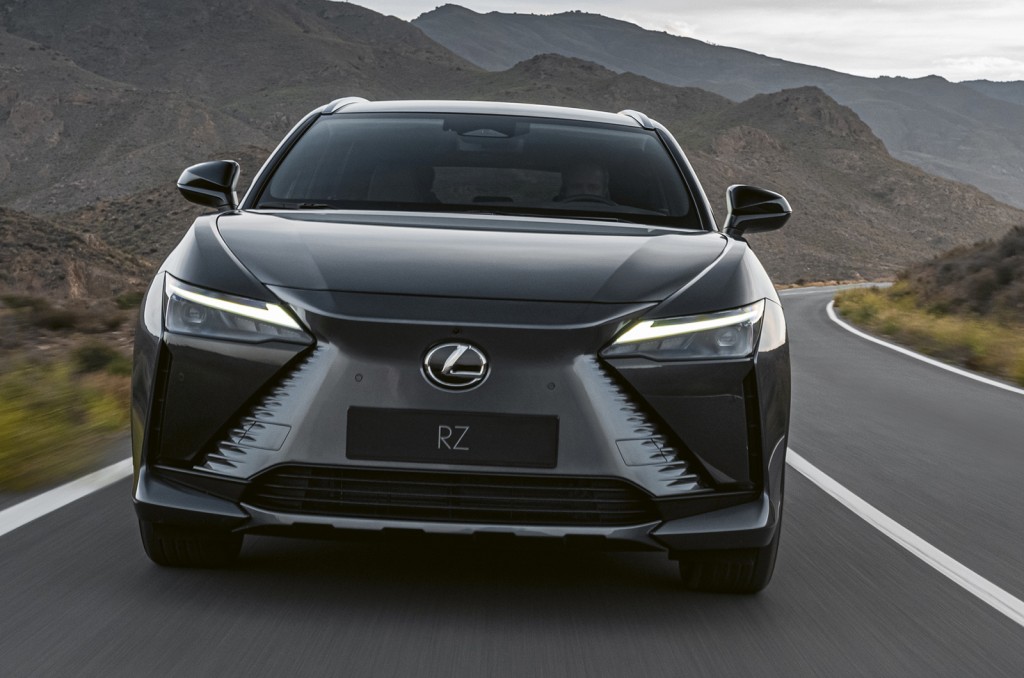 If the RZ 450e looks a little familiar, that’s because you’ve likely already seen it a few times before. It was one of 15 concept models Toyota boss Akio Toyoda wheeled out during an EV presentation recently, and several other images of it have been released.

Size-wise, the RZ 450e is close to the existing combustion-engined NX, although the two models will be offered alongside each other for the foreseeable future.

The exterior design maintains the Lexus ‘spindle grille’ concept, although without a traditional ICE grille the spindle shape has been worked into the front body of the vehicle. There are also new headlights that are designed to blend into the spindle design. At the rear, a split roof spoiler helps to improve the airflow and aid stability, while there is a traditional Lexus light bar running across the width of the car. 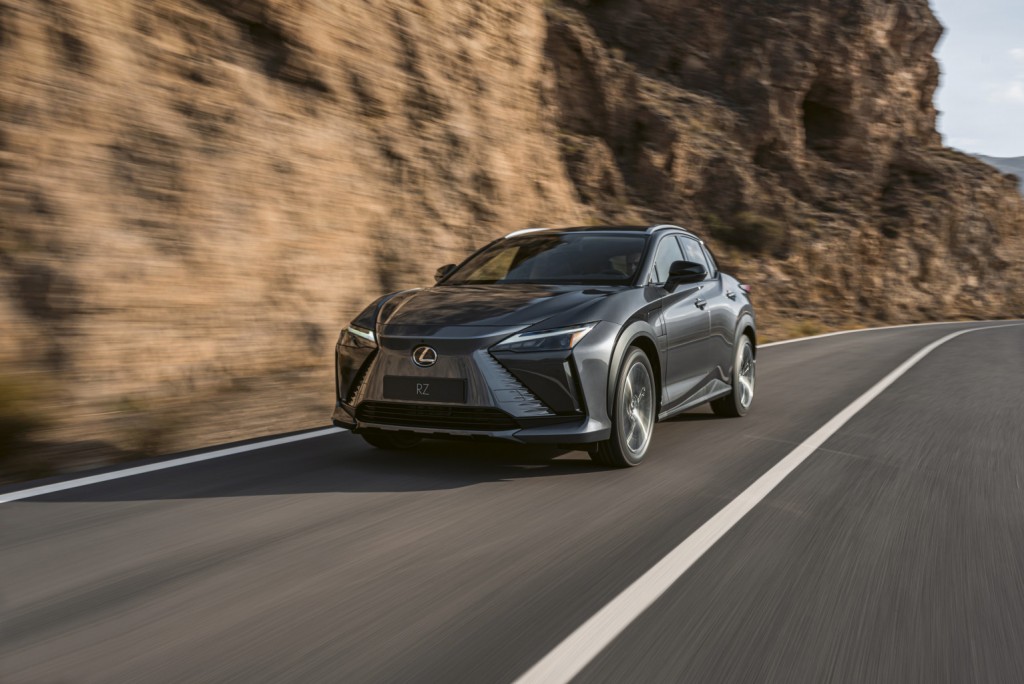 The interior features an evolution of Lexus’s Tazuna design concept. There’s a large head-up display and a 14in infotainment system, while the firm has also stripped back many of the traditional controls. 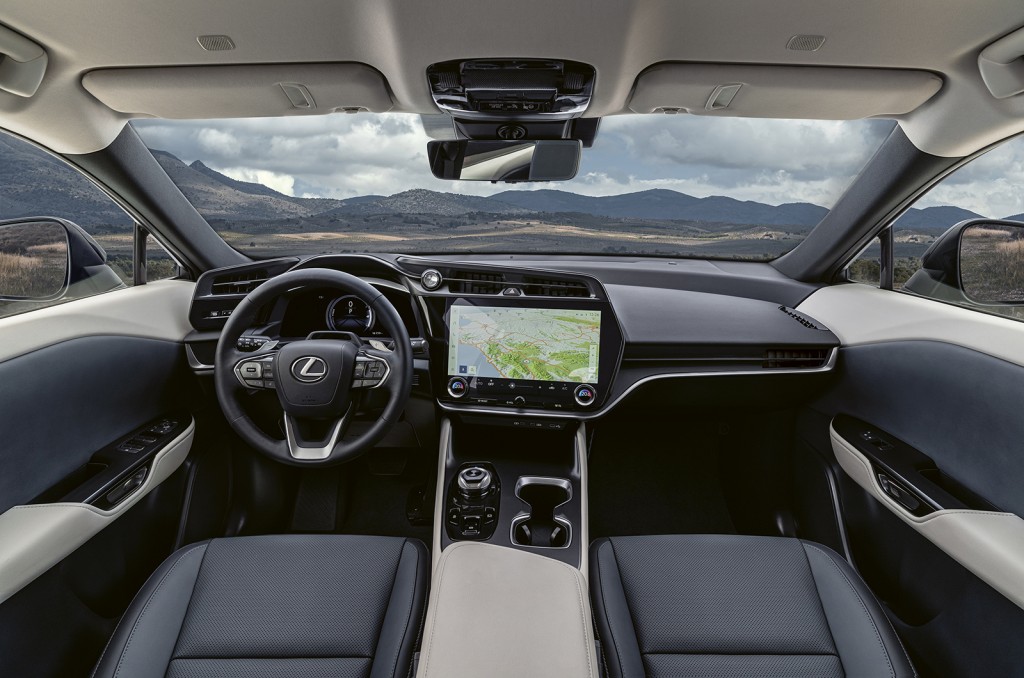 Other notable design features include a double panoramic roof and knee-level radiant heaters.

There’s a range of driver assistance and safety features included including the new Safe Exist Assist, which will prevent the door being opened if it detects vehicles or cycles approaching from behind.

The e-TNGA platform features the classic skateboard chassis design with a motor at each end and the batteries under the floor. There is a 150kW front motor with an 80kW rear unit, giving a total system output of 230kW (309bhp) and 320lb ft of torque. That’s enough for a 0-62mph time of 5.6secs and a limited top speed of 99mph. 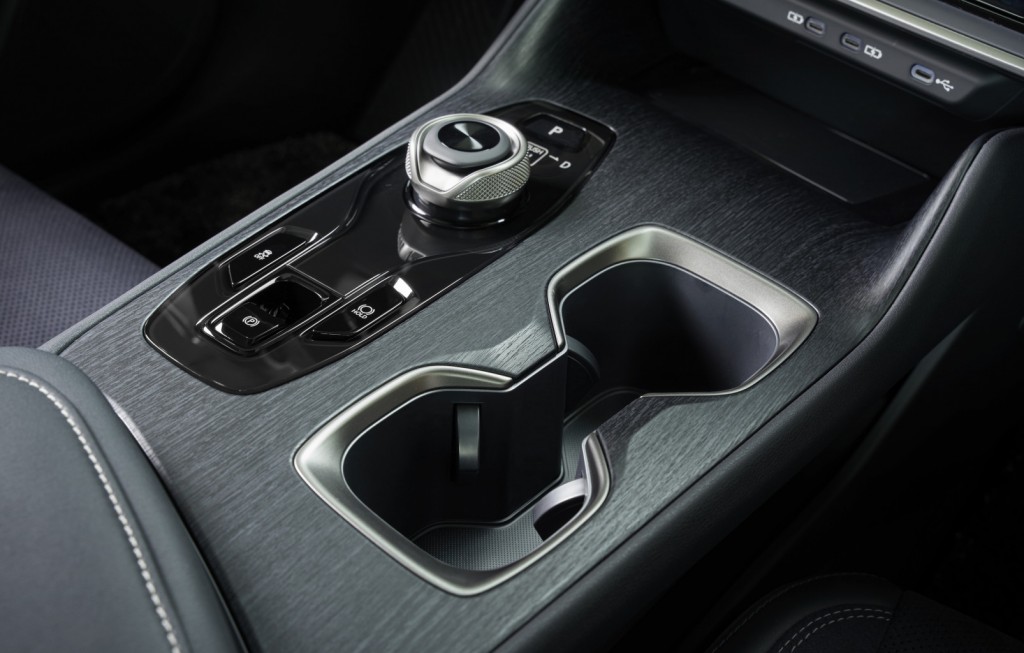 The 71.4kWh lithium-ion battery is comprised of 96 cells, and Toyota claims the official range will exceed 250 miles, with the energy consumption targeted to be less than 3.45 miles per kWh. A selection of drive modes will be offered, including a Range mode that will limit speed, adjust the power distribution and turn off the climate control to maximise range. Expect charging at speeds up to 150kW.

So how is Lexus going to make an electric SUV fun?

Lexus claims is it focusing on the ‘three C’ core characteristics: confidence, control and comfort. To do that, the firm has worked to maximise the traditional benefits offered by an electric powertrain, such as immediate response and plentiful torque, while also offering a driving style that is “both comfortable and exhilarating”. The idea is to create a machine that responds with a natural feel to driver inputs.

The twin-motor set-up means the RZ 450e has all-wheel-drive, which is powered by two e-axles. Each e-axle unit, which consists of a motor, gearing and an ECU, is located behind the driven wheels, and can automatically adjust the posture, traction and power distribution of the vehicle. 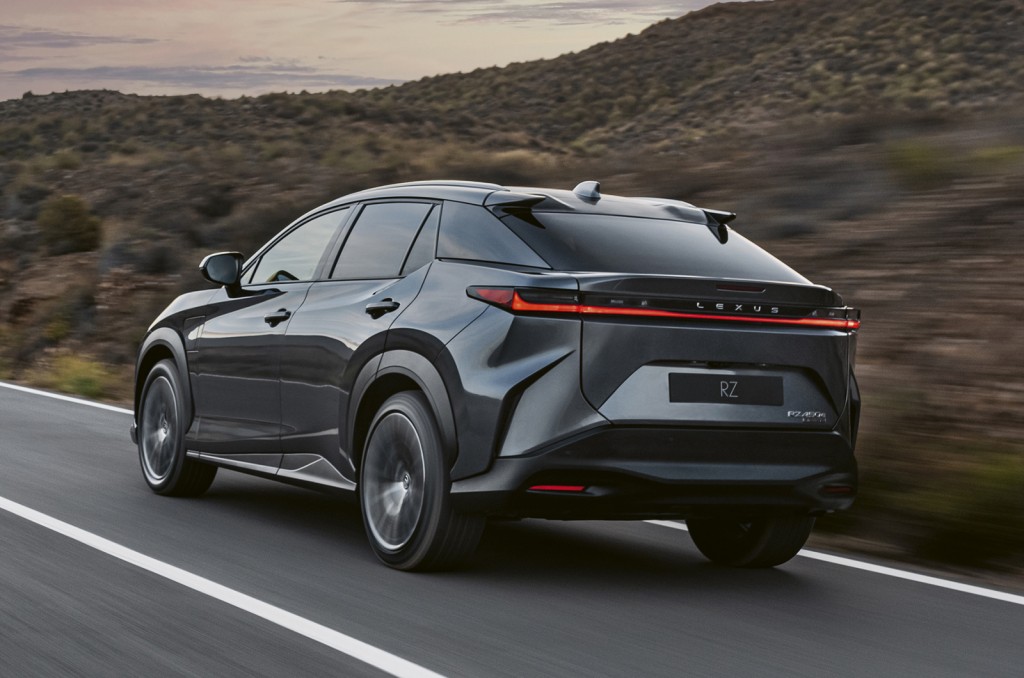 The machine is also the first to use Lexus’s new Direct 4 system (it’s called X-mode on Toyota models), which works with the e-axles to balance traction to the four wheels by using ECU sensors to analyse factors such as vehicle speed, steering angle and G force. Lexus claims is can adjust the front/rear torque bias from 0-100 in milliseconds.

To combat road noise becoming more noticeable given the lack of noisy combustion engine, the RZ 450e’s engineers have worked hard to reduce noise entering the cabin, and also developed a new version of active sound control, using the car’s speakers to produce sounds to ‘emphasise’ the powertrain response. 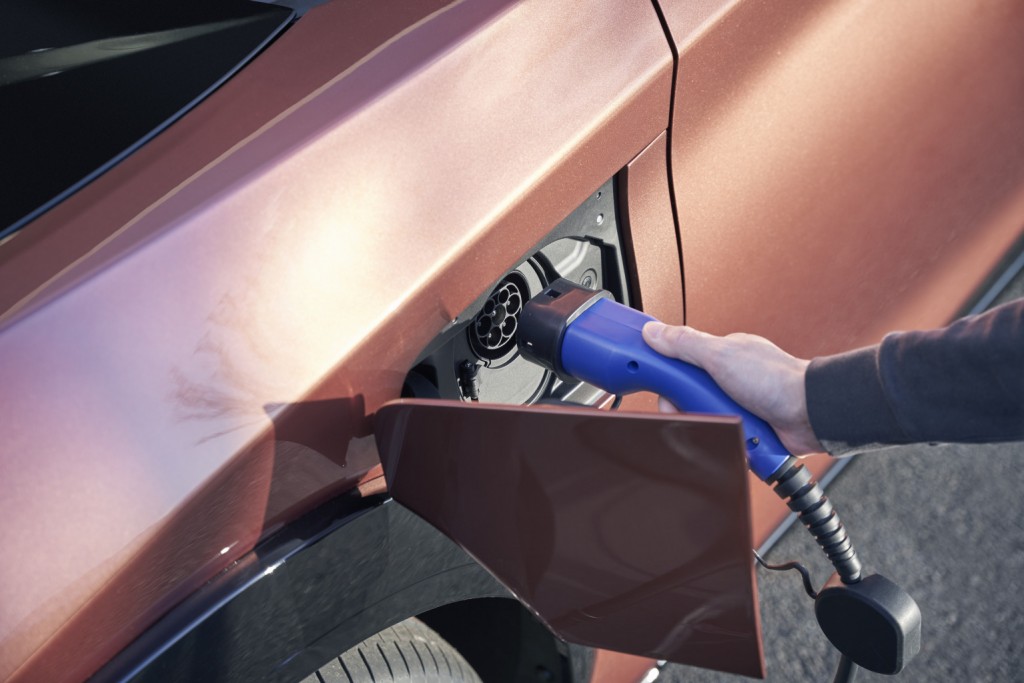 Well, if you tick the right box, that is, because an optional extra for the RZ 4503 is the firm’s new One Motion Grip steer-by-wire system. That means it has no mechanical link and no steering column between the steering wheel and driving wheels, with an electrical connection instead sending inputs between the two.

That, Lexus claims, allows for a quicker response and more precise steering control, and means the driver will notice less steering sway on rough roads or in strong winds. But the firm insists the system still offers the feel and feedback of a regular system. There are also ‘fail-safe’ processors and an emergency power supply, so Lexus insists you won’t suddenly be unable to steer your vehicle in the event of a system failure. 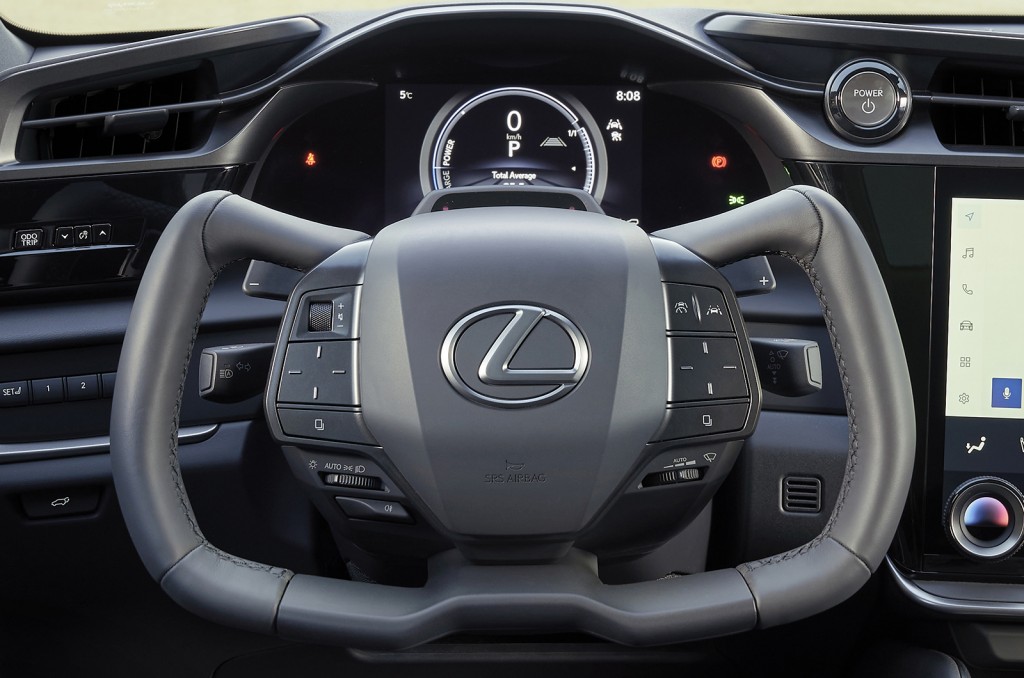 Notably, you can choose to have the One Motion Grip system with a steering yoke instead of a traditional steering wheel. Lexus claims the system requires less input from drivers, because a 150-degree turn of the yoke enables drives to go from straight ahead to full lock. The yoke has a ‘butterfly’ shape developed by Lexus’s expert ‘Takumi’ drivers.

Because of the more option view offered by the steering yoke, Lexus has set the instrument binnacle higher on the car and further away, so they are close to the drivers sight lines when looking at the road.

So when can I buy one?

We’re not sure yet. The RZ 450e is due on sale around the end of the year in the UK. Pricing has not been set yet, but expect a premium over the related Toyota bZ4X.