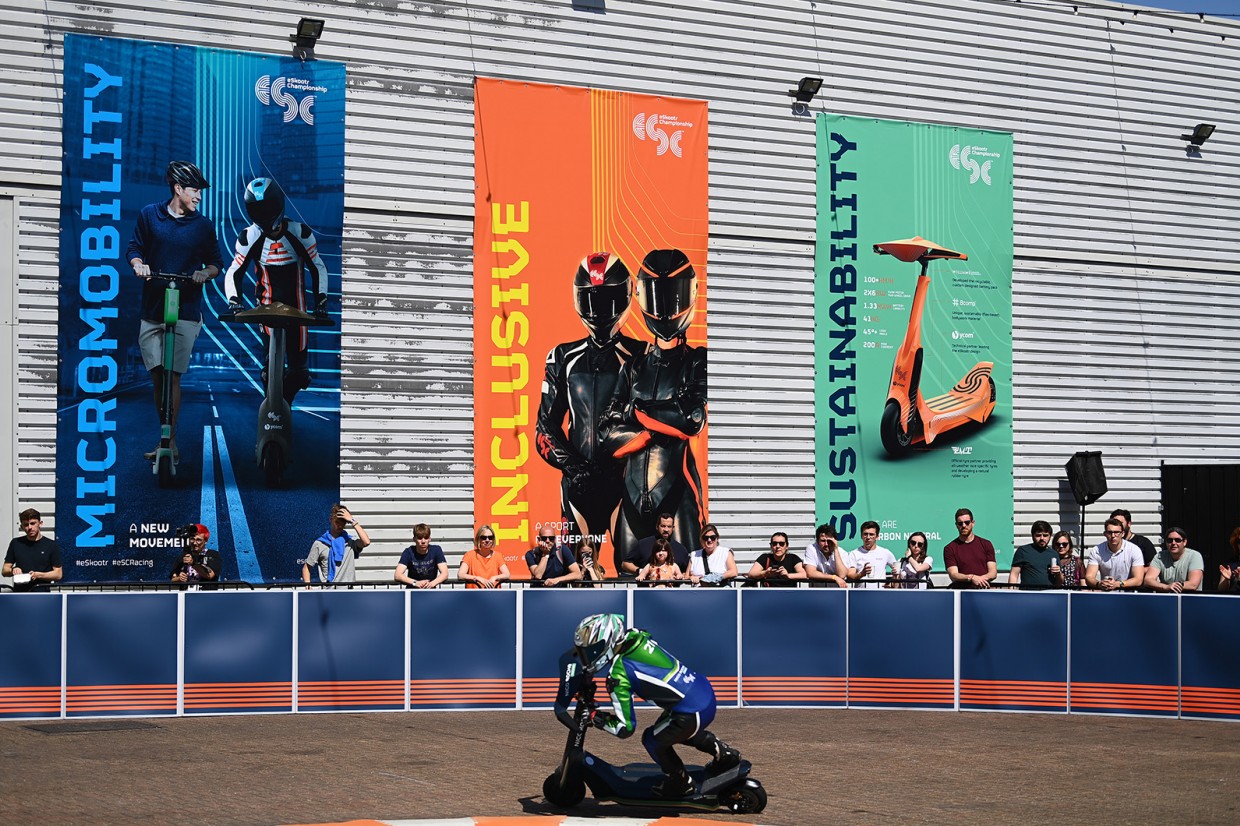 Just under two years since it was first unveiled, the inaugural eSkootr Championship event took place in London last weekend.

As the first racing series for electric scooters, the new category was always going to be distinctly different from every other motorsport category – and that was confirmed in the first race at Printworks London in Surrey Quays.

Move Electric headed to the event to check out where e-scooter racing showed potential – and has room for improvement. Here are our top 10 takeaways.

Let’s start with the racing itself because, ultimately, that’s key to the success of any motorsport championship. And the signs here were positive.

The eSkootr Championship format involved a series of short, sharp elimination races, which helps keep the drama up and the field close. And it’s also clear the 60mph S1-X e-scooters can produce some good racing.

The machines could run side-by-side, and through use of the boost button and good race craft overtaking was certainly possible. While some heats became strung out, there were plenty of changes of position. The highlight was probably the race-long duel in the first Semi-Final between eventual event winner Matis Neyroud and Anish Shetty, with the pair swapping positions multiple times.

Another great sign was Brit Dan Brooks’s charge from fifth place to second behind Neyroud in the final. It showed that making a bad start and dropping track position doesn’t necessarily end your chances, even in a short race. 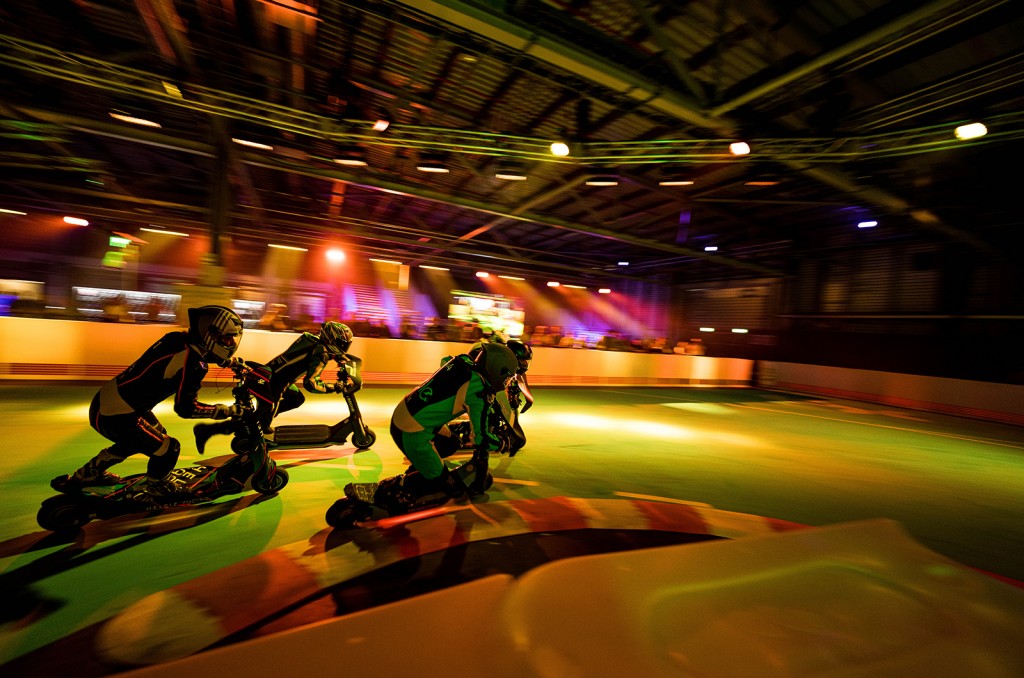 2: Riders are still working out the best way to race an e-scooter…

With the category in its infancy, nobody has yet perfect the art of e-scooter racing. That was clear from trackside, where a variety of techniques could be seen. There were differing lines through corners, while some riders also dragged their feet on certain bends to help their turning. Even on the straights, riders were trying a variety of tuck positions to try and minimise their aerodynamic drag. 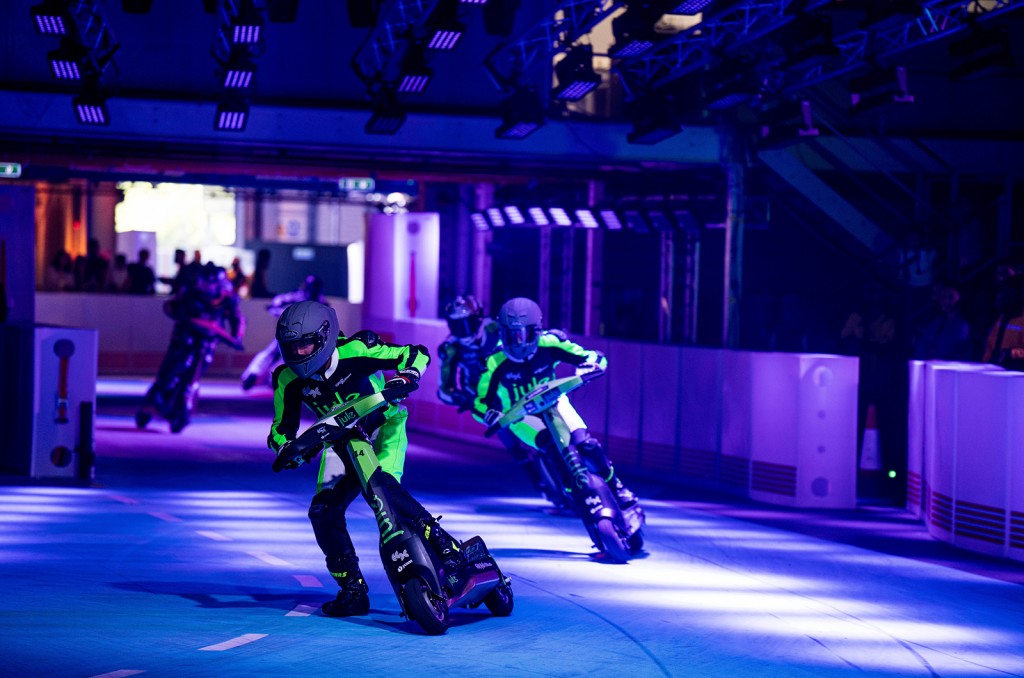 Through its two-wheel design, the S1-X was closer to a motorbike than a raving car in terms of riding style, with the skill of leaning into turns to maintain a higher cornering speed a key skill. Because of that, it seemed the bike racing converts in the field generally set the pace.

That said, the margins in terms of outright pace were narrow, the bikers certainly didn’t have things entirely their own way – notably it was freestyle kick scooter rider Neyroud who took the overall victory.

The advantage the bikers had wasn’t so much about sheer pace but race craft: they knew when to attack and defend, where to try passes and when to push, a competitive edge that some of their rivals lacked.

Still, with a freestyle scooter rider, a bike racing and a Cross Fit champion (albeit one with bike racing experience) on the podium, the eSkootr Championship certainly delivered the promised variety of talent. 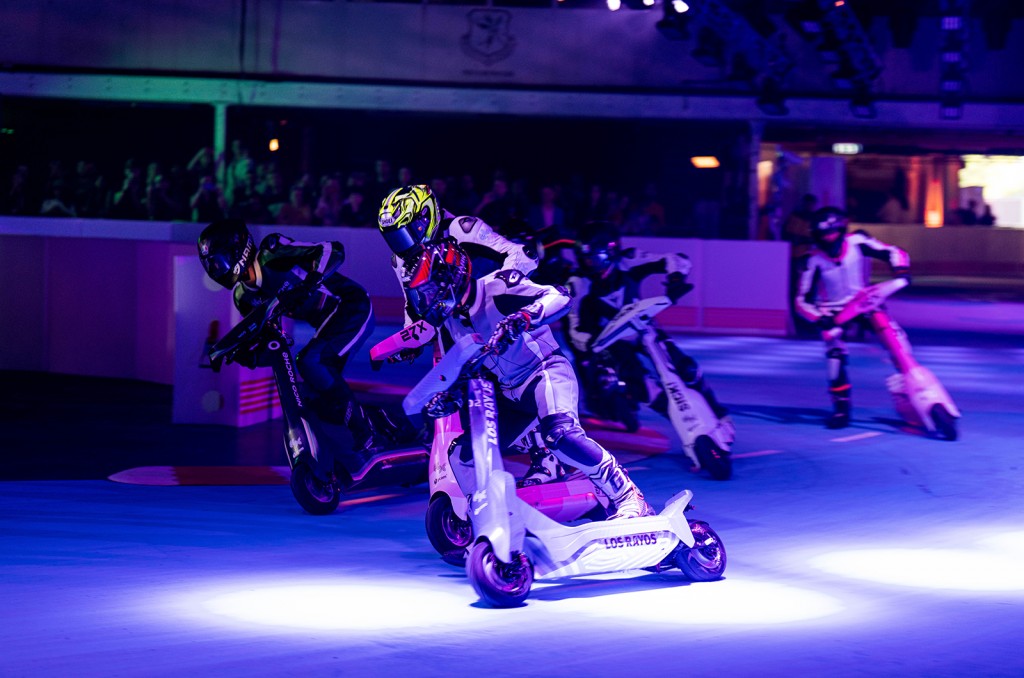 The race-bred S1-X e-scooter developed by the championship did its job well. It was reliable, seemed to inspire confidence from riders and was also solidly built – while a few lost bits of bodywork after crashes, riders were generally able to jump back on and keep going, and there were very few mechanical issues.

The S1-X motor also featured a boost system, similar to the version in Formula E, with riders given a certain amount of extra power. Cleverly, riders carried the total through the races, so they had to decide whether to use more in the early events to ensure they made the final stage of the event, or try to save some for the final when the trophy was on the line. That said, it was a little hard to know which riders were using boost at any given time, and a little confusing to keep track of. 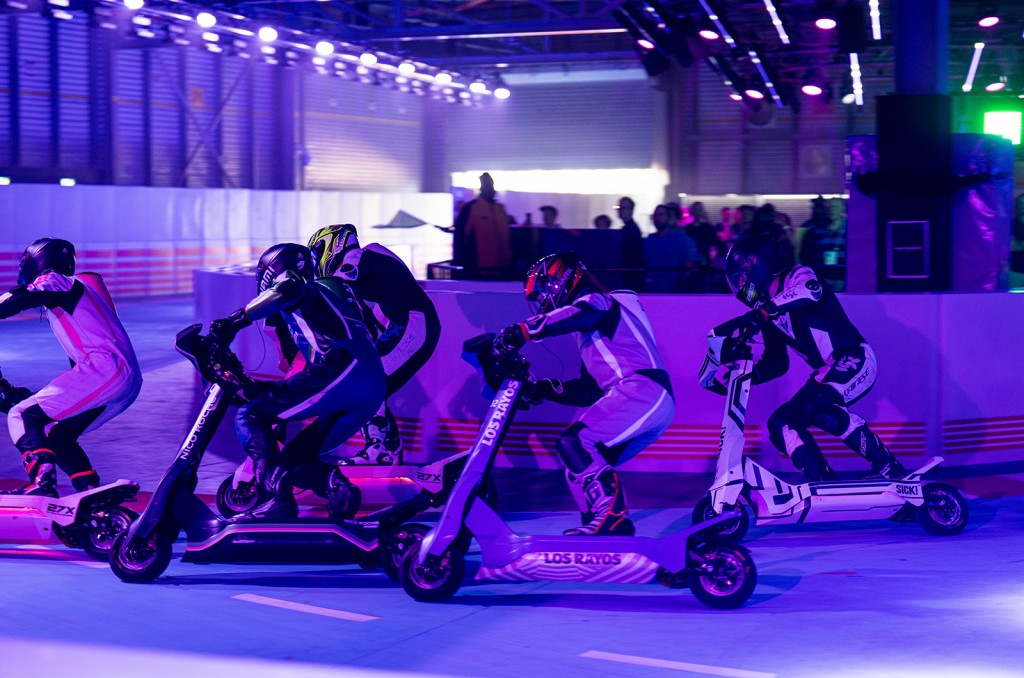 5: …but it did lack a bit of spectacle

Still, it has to be noted that the machines were somewhat lacking in spectacle. Part of motorsport’s appeal is the visceral experience it offers. Through lack of noise, the comparatively low 60mph top speed and general poise that was somewhat missing with the S1-X.

The racing helps compensate for that, of course, and it will be interesting to see if series bosses can add some extra appeal in as the category develops – as has happened with Formula E.

6: Printworks London was a decent venue

The founders of the eSkootr Championship wanted to develop a scaleable package that could race in a variety of venues, and race in places that traditional motorsport series can’t. They certainly achieved that with the inaugural event – held in a newspaper printing plant-turned-nightclub in south London.

It was an unorthodox venue, and it allowed for an unorthodox track that ran through both inside and outside of the building. It meant riders had to cope with a variety of surfaces, with a polished floor inside and rougher cobbles outside – exactly the sort of surfaces leisure e-scooters might face.

The track featured several distinct sections, including a long straight and a couple of more technical sections that included a number of switchback hairpins that made for some great racing.

It also meant fans could choose from a variety of views: they could watch the start and first corner inside the venue, watch the machines nip down the long straight or see them tackle the final curving hairpins. 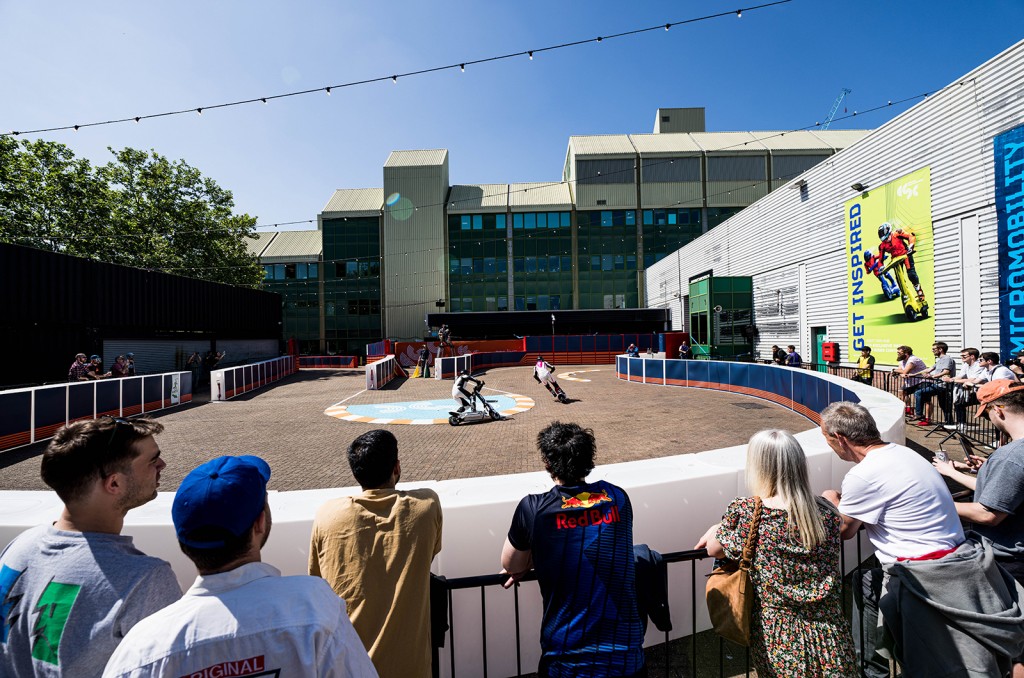 Each offered a different experience. That said, it was a shame the outdoor viewing areas lacked big screens where fans could watch the action going on elsewhere, and better signage would have been welcome: the final hairpin was a great viewing sport, but it was hard to find and not well signposted.

It also wasn’t the easiest venue to get round, and there’s definitely room for improvement in improving the spectator flow if the series returns.

Of curse, each eSC venue promises to be very different: the next race is in Sion, Switzerland, racing through the heart of the old town’s cobbled streets. 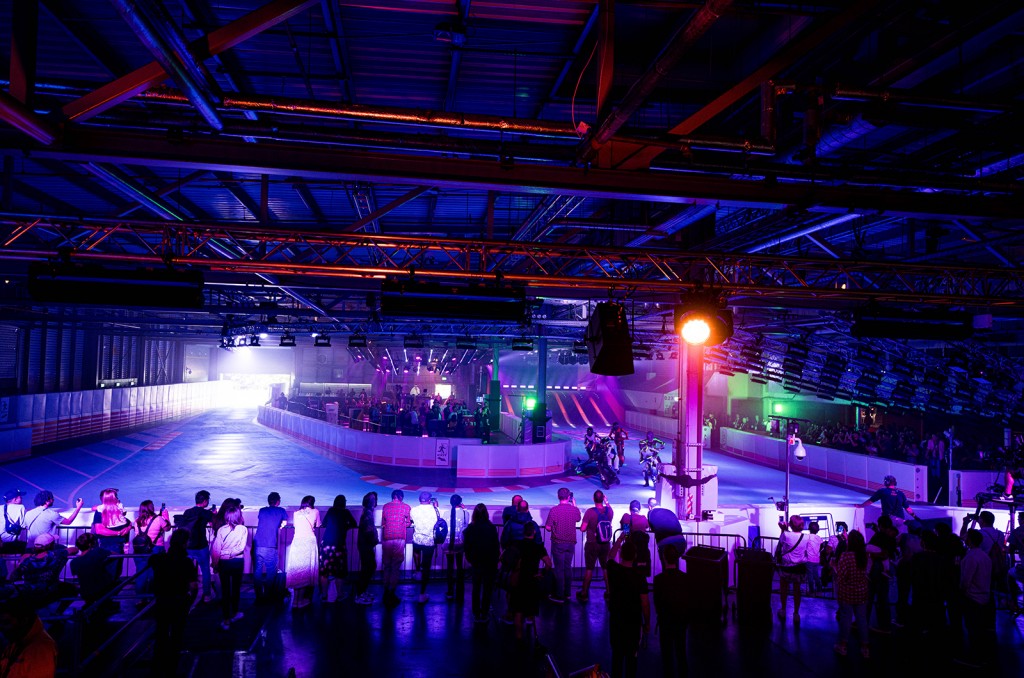 7: Fans could get close to the action

With the lower speeds of e-scooters compared to racing cars and bikes, the spectator areas could be a little closer to the action in places, which was a bonus. But perhaps the best bit was how open the pit area was.

Fans were allowed right into the heart of the pits - in fact, they had to go through it to get from the venue entrance to the food trucks and outdoor viewing areas. And with its compact layout, the indoor pits was a hive of activity. The 10 teams had to service their machines in full view of the fans, and the riders were often hanging around in public. 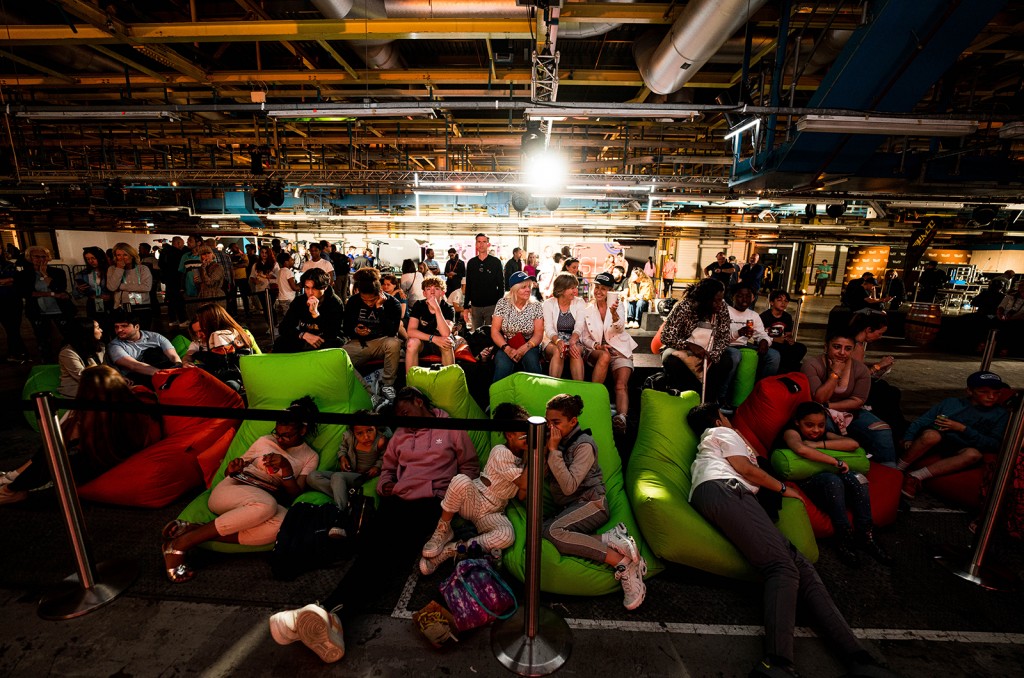 8: There was plenty of unusual off-track entertainment

The novelty factor of e-scooter racing drew a decent and diverse crowd to the event – although the indoor/outdoor nature of the venue meant it was hard to really guess how many turned up. But the fans there were treated to an afternoon of action.

That was partly down to the compact format, which featured 13 races (six heats, four quarter finals, two semi-finals and the final) in a little more than five house. But there was plenty of other entertainment on hand.

There were a range of fun activities set up for younger fans, including an e-scooter balance simulator, and various entertainment acts in the venue. At one stage, there was a group showing off keepy-uppy football skills on one side of the pits, and breakdancers showing off their skills at the other. And that was before the jugglers turned up…

Added to that, there was a choice of decent quality food truck dining options that far exceeded the traditional motorsport burger van. 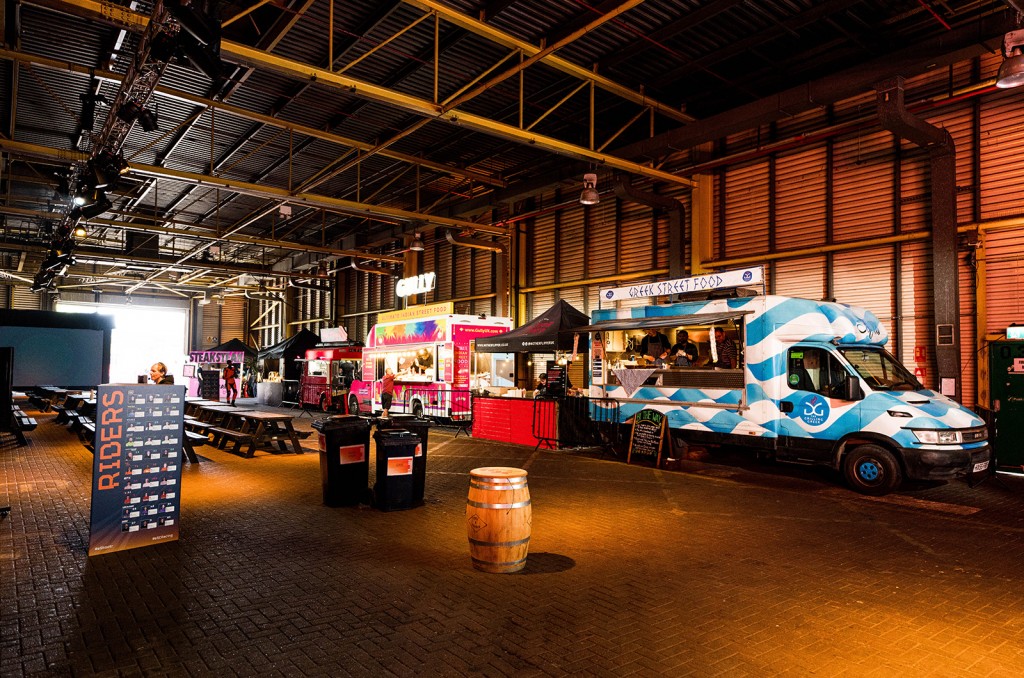 9: The TV coverage was decent, if a little gimmicky

For those in the UK not at the venue the action was shown on BBC iPlayer, and the BBC Sport and eSkootr websites. We took the time to watch it through afterwards, and it was a decent package.

While the live coverage had some big gaps in, the commentary was good, there were a series of well-produced profile pieces on the riders – a useful touch, given many aren’t household names – and the presenters did a good job of highlighting the intricacies of the racing format.

Our only complaint: having the presenters appear in floating boxes ahead of an artificially produced computer-generated ‘electric city’ backdrop didn’t really work for us. The futuristic and stylised city had no real link to the London venue, making the presenters feel somewhat detached from the action.

10: It helped put the spotlight on e-scooters

The timing of the event in London could hardly have been better, coming just days after the UK government announced plans to fully legalise e-scooters. And it was encouraging that eSkootr bosses really did show a promised commitment to helping develop the wider micromobility industry.

On the day before the event the organisers hosted a New Mobility Forum at Printworks London, bringing together many of the key figures in the UK electric mobility industry.

School kids were also invited to the venue for some scooter training, and also for lessons on road safety from Test and Training International (the firm run by series co-founder Alex Wurz). 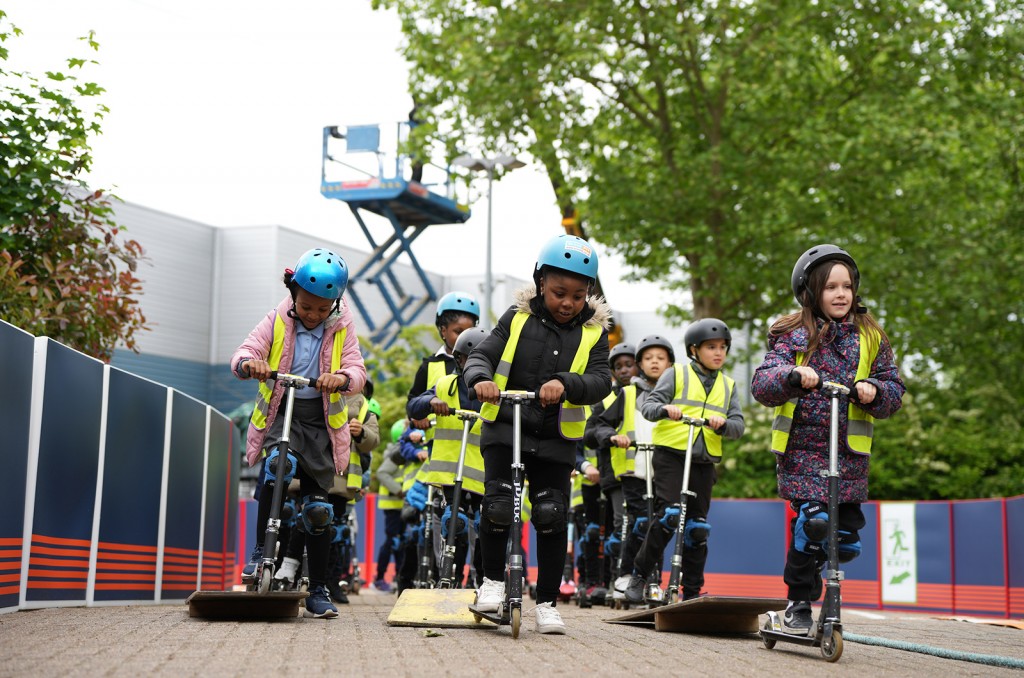