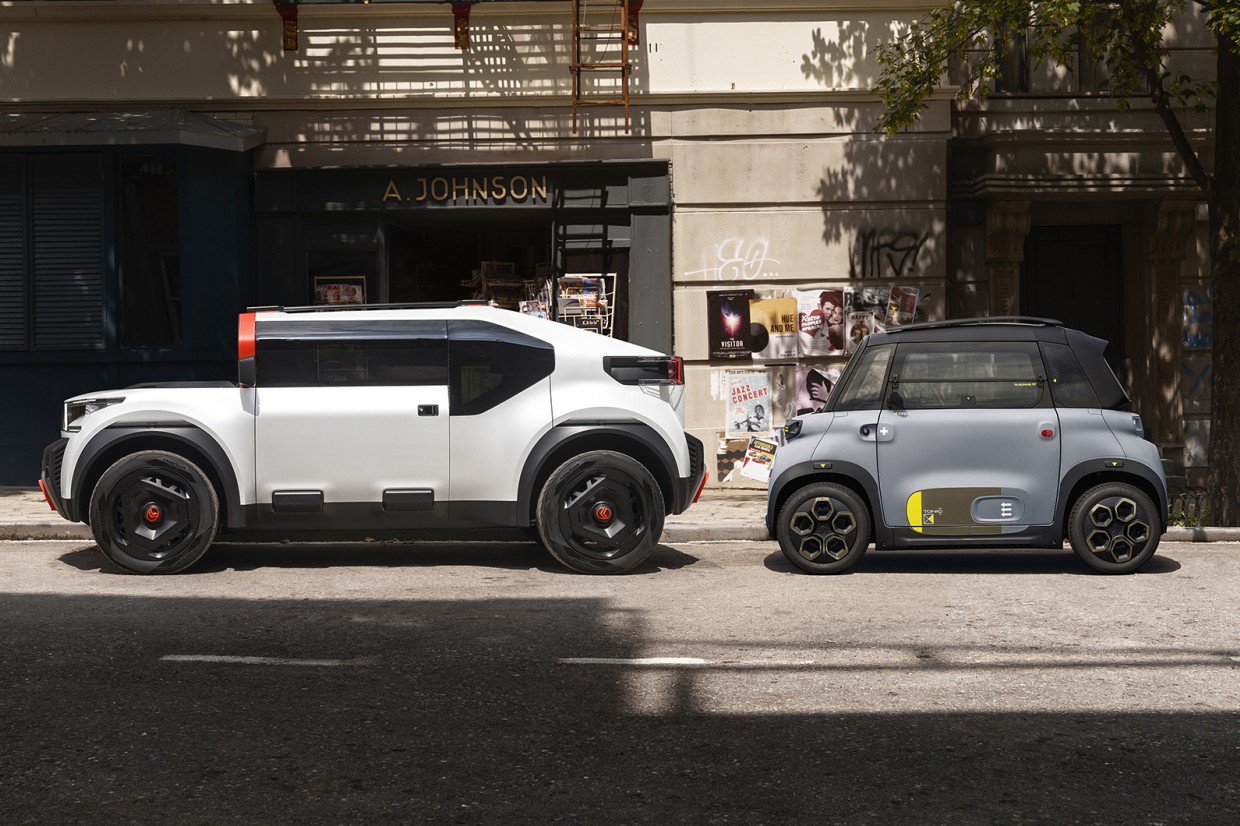 Citroën has long had a reputation for bold, unconventional thinking, built from the classic 2CV and pioneering automotive innovations such as pneumatic suspension and disc brakes.

The French firm has really embraced that approach as it ramps up its electric vehicle line-up, out notably with the Citroën Ami quadricyle – the winner of this year’s Move Electric Innovation Award. It has now revealed the Oli (pronounced ‘all e’, in case you were wondering), a bonkers concept car that seeks to demonstrate key philosophies Citroën will pursue in the future.

It certainly looks distinctive, with angular, rugged styling that hints at what the next-generation electric Citroën C3 hatch will look like – although don’t expect the horizontal windscreen to reach production.

But the real interest is on the philosophy behind Oli. There’s a major focus on making a car that forsakes the big, heavy batteries of many current EVs, instead chasing efficiency through a lightweight design and aerodynamics. And it uses a number of innovative materials made from recycled parts, with the intention that a production version could be easily repaired and refreshed so it can be leased out several times – before being entirely recycled at the end of its usable life.

Unveiling the Ami, Citroën boss Vincent Cobee was outspoken in his belief that the automotive world is going the wrong way by pursuing large, heavy electric SUVs with ever bigger batteries. Following the launch, Move Electric had a chance to hear more about his views on the Oli and the future of EVs. 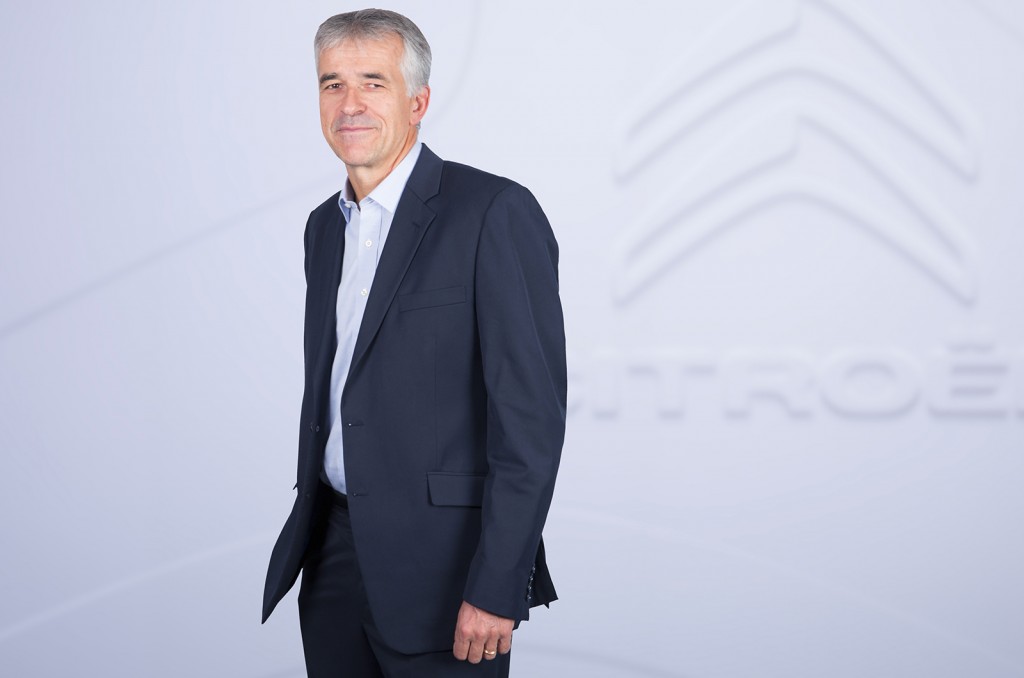 There are similarities between the philosophy of Oli and the 2CV: they’re both light and very simple. Do you think Citroen will ever make another car that has such a big impact on society and the economy as the 2CV?

“This is fascinating debate when you’re in charge of a brand that has written so many things in its history. Citroen is the most collected car brand in the world. I'm not going to wake up trying to rewrite the past. We’ve done amazing things in the past, and I love our heritage, but I’m not here to replicate our heritage, I'm here to draw the future.

“If whatever becomes of this is as impactful as the 2CV I’ll extremely happy. But even beyond, I'd be happy to help society move forward. We don't wake up to try and do miracles, we wake up to try and do some things we feel comfortable with. Like everything in life, sometimes you're in the right moment and things go better than planned. Sometimes you too early or too late, and things go just normal.

“When we introduced the Ami concept in Geneva in March 2019, we didn't know how well it would go. When we unveiled the production Ami in February 2020 we had excitement but also tomatoes thrown at us. The reality today is that Ami is an interesting success. It's been two years in the making, it was not overnight. The thing that has accelerated Ami is gasoline prices going above two euros per litre.

“You should always remain very modest about whether you can write history. What I know is we wake up every morning saying ‘let's not replicate the past, let's think about what is relevant in five years’. I don't think you can predict success and 2CV is far too much of a success to have as a target. Our conviction, simple as it is, is that freedom of mobility is important, so 2.5 tonnes and €70,000 [£61,700] is not the answer.” 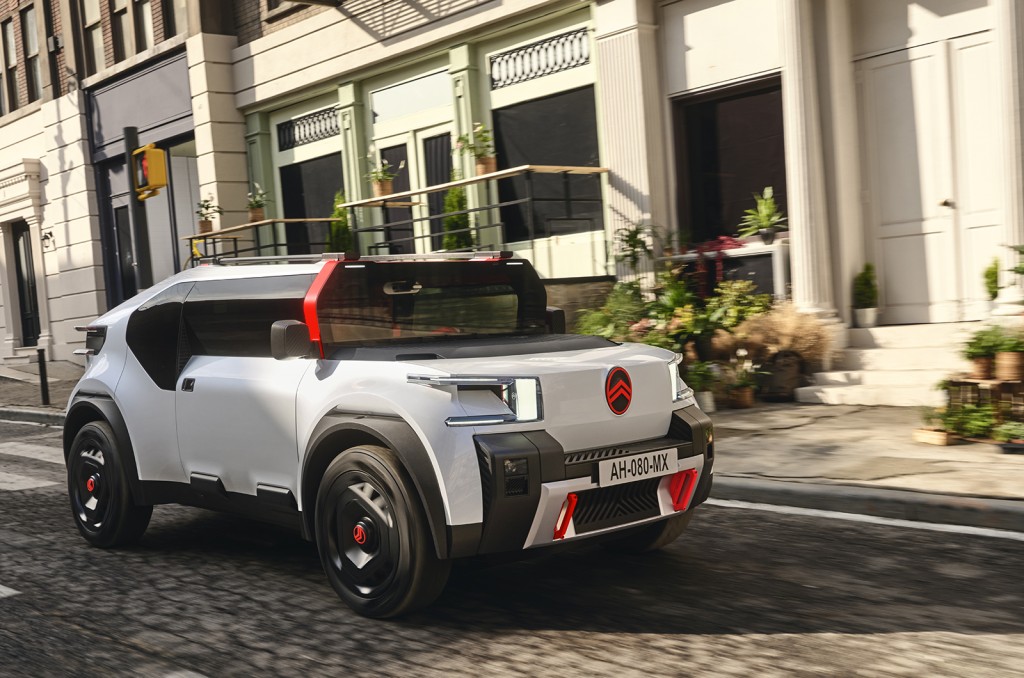 When did you first start thinking about creating Oli?

“A good two-and-a-half years ago: early 2020. We learned as we walk. We didn’t come down from a tree with a great idea to do exactly this. We said ‘how do we do something that is ingrained with respect for the environment, extremely capable and electric?’ And then it morphed into something else, because there are more aspects to the discussion. That's why we have advanced product groups and advanced design groups.

“We had a lot of bottom-up ideas in terms of usage of materials, weight reduction and functionality. But the fundamental intention was to create desirable, capable, electric and affordable, and then it grew into a much broader and denser proposition.

“What we also need to be all very honest about is that nobody knows truth. The question is, how much conviction, how much passion, how much humility, and how much heart do you put into something? Then you let it grow and develop, and then you realise what you've created through the 1000 touches, and you say, ‘yeah, that's right’. The story of this concept is very interesting because we didn't write it as it is today. We worked with 20 people contributing to make something that is affordable for everybody.” 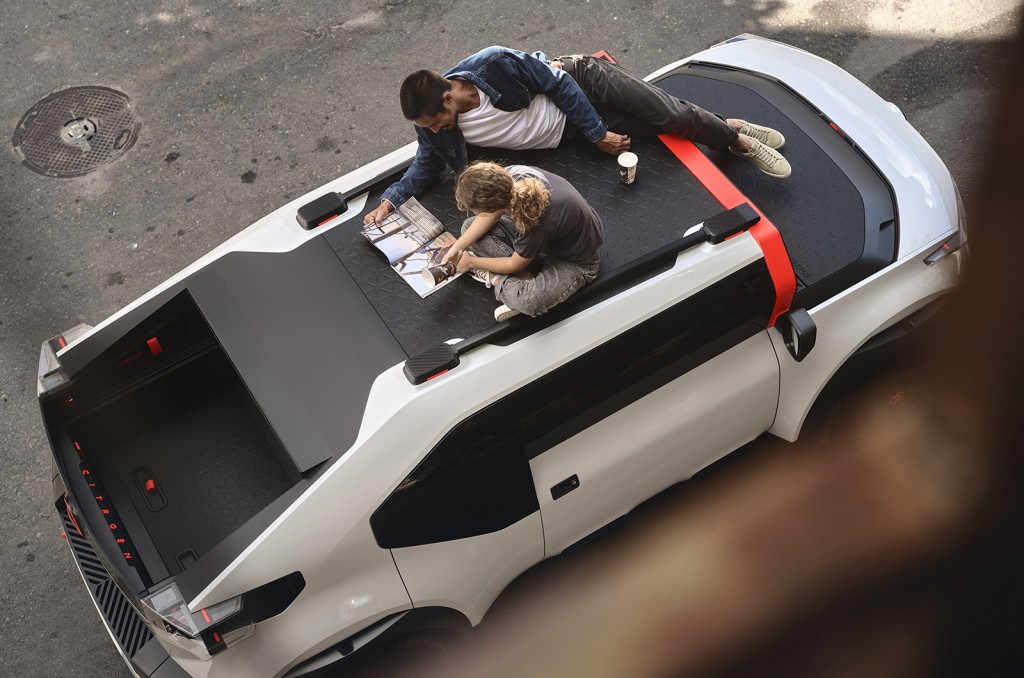 Why the focus on reducing the cost for a car such as this?

“The average transaction price of a vehicle in Europe today is €25,000 [£22,000]. I don’t know the exactly average price of an electric car today, but it’s somewhere around €45,000 [£39,700] – it’s between 1.5 and twice the price of an average car. If you look at total household income, and you believe in bell curve distribution, an electric car today is only being purchased by five to 10 per cent of the population.

“If we want electric cars to become more accessible, we can use the tools of leasing and better residual values, but we ultimately need to engage in talks about efficiency, size, performance and cost to make it affordable. But if I only do this without thinking about desirability I’m going nowhere, because nobody buys a car simply because it's sustainable. Nobody buys a T-shirt simply because it’s sustainable, it has to be fashionable as well. That’s what we did here – and if you believe this is a boring car then we need to talk.”

Which bits of Oli will be see in future production models?

“You will see parts of this in many models across time. The things that you will see earlier are aspects about the service dimension – the second and third leases and end-of-life management. You will also see the new logo and styling identity, of course, and you will see more use of recycled materials in both interior and exterior parts. You will see more about the Human Machine Interface, which is about how you engage with a car. 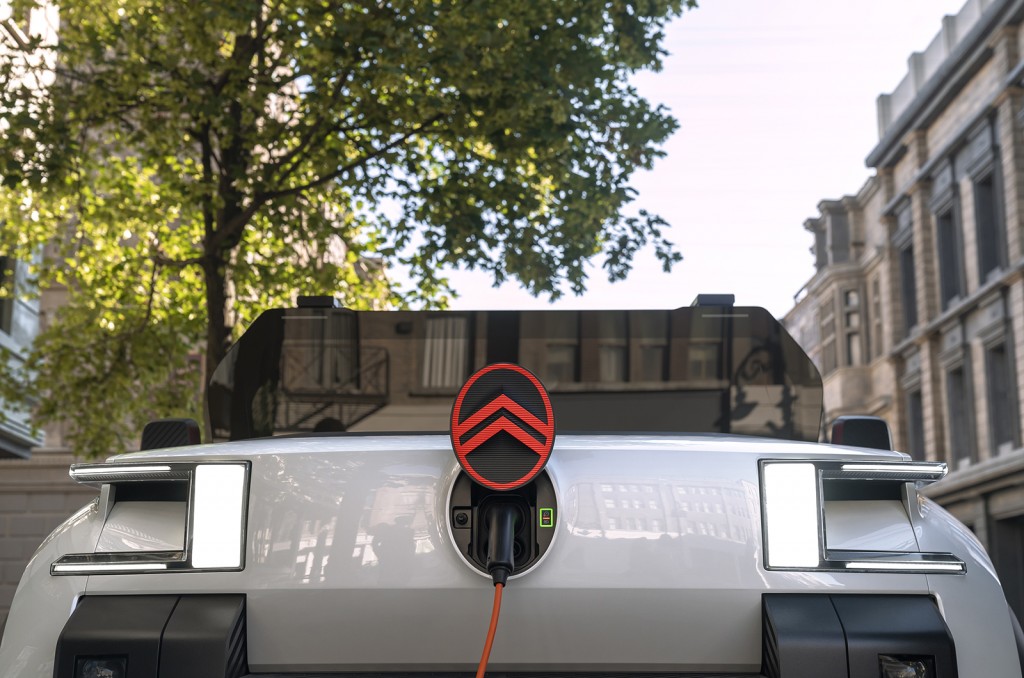 Will we see a future car that looks like Oli?

“I don't know. I want to be clear, the same as I said about the development of a concept, what you will write will make us react. We throw an idea, and we look at the way people react. We look at what you write and how people react. When we show this to people they are shocked. I don’t know if you’re shocked because you love it or hate it: I personally enjoy love and hate: everything in the middle, you don’t know what it is.”

You say that Oli is a statement against big, heavy, electric SUVs. So you surely can’t ever launch a big, heavy SUV again after this, can you?

“Ideally, I won’t. Again, we do have cars that have gone heavier, don’t get me wrong: I’m selling plug-in hybrids and electric cars, and they've gotten heavier. There are customers for this. I'm a dreamer, but I'm also a salesperson.

“We just want to put out our intention to make this converge to something which is more sustainable. At some point, we need to embark on another approach, a systemic approach. The key driver of weight is electric cars is battery size. If you're in Paris and you want to go to Marseille, no car will bring you there in one charge, even if it was homologated with 1000 kilometres [620 miles] of autonomy. First, because your bladder has less autonomy that that battery. But also because it's an 800 kilometre [500 mile] trip and driving on a highway will limit your performance. 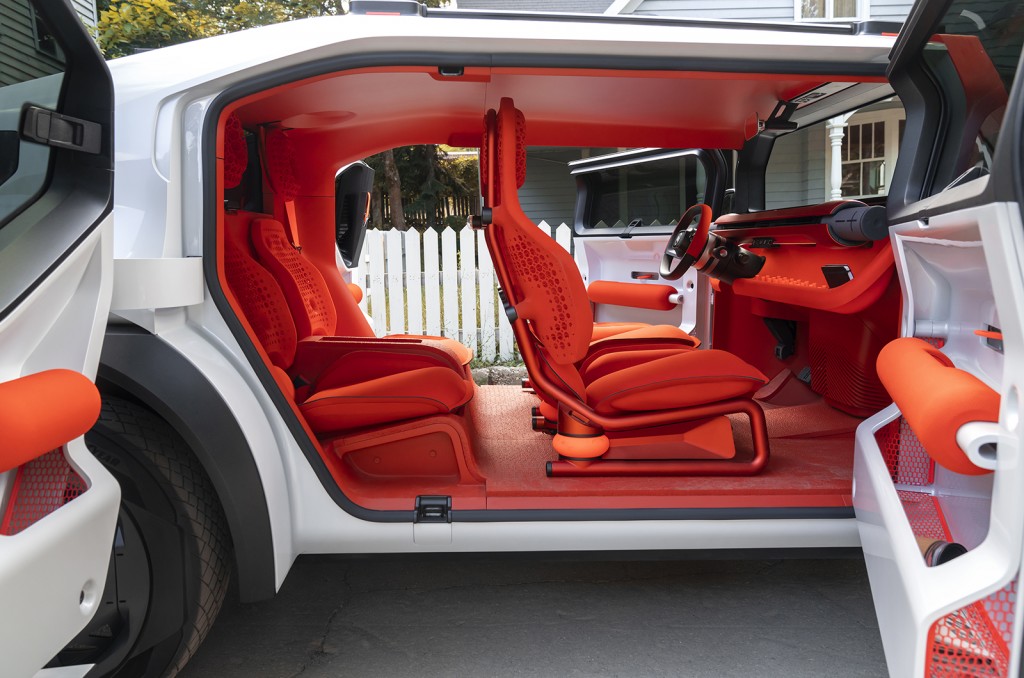 “The question is, how do we find a way to make the vehicle adapted to your use, affordable to your wallet, and practical for your everyday and less frequent usage? One answer, which is currently the dominant answer, is an arms race towards the largest possible autonomy. If you look at some recent launches, models were 2.5 tonnes and €100,000 euros, with more or less 100 kilowatt hour of batteries. That is something which is affordable by less than one per cent of a population.

“How do we react to this? Part of it is battery efficiency and vehicle efficiency, and part of it is charging speed. If you look at the Citroën e-C4, for example, it’s one of the quickest charging vehicle available in the market. Then you talk about trip planner efficiency and responsible trip planners, or an alternative solution for the one or two weekends per year when you need to do this long trip so you don't pay for a battery you only use two weekends per year.

“It's a systemic approach because if the answer is I want a car that brings me from Point A to Point B like the good old diesel engine of the 1980s with a 90-litre tank, it won't happen.” 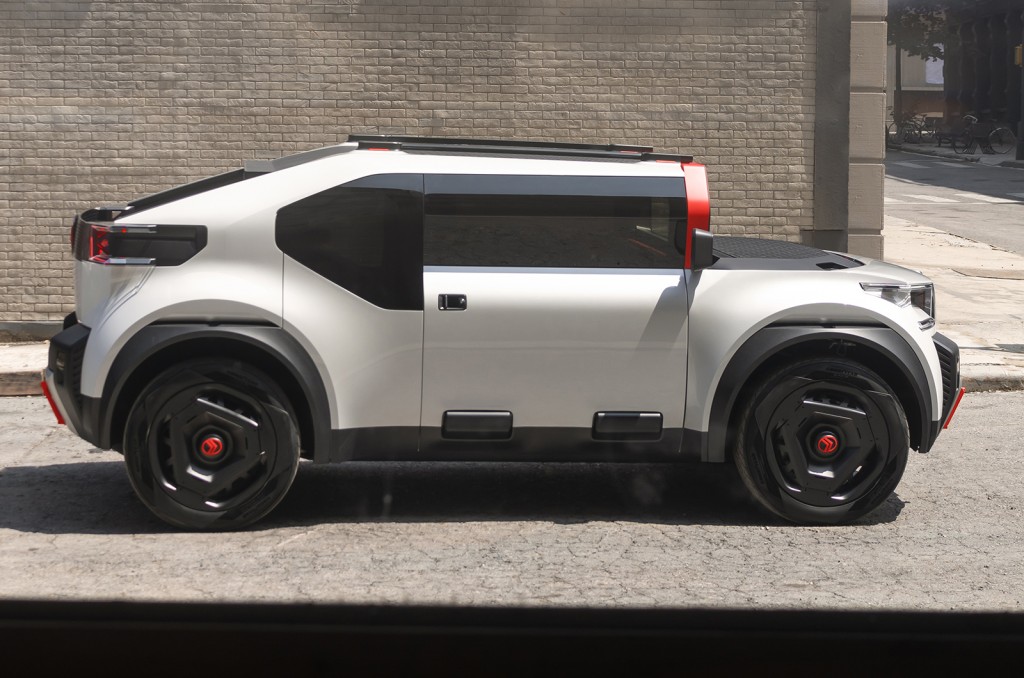 Can you take such a philosophically different approach while still taking advantage of the benefits of being part of [car giant] Stellantis and using its shared platforms?

“Obviously, it's an issue we need to negotiate on a daily basis. But again, the reason we’re here showing Oli is because we think it's right. I'm not saying it's right for everyone. I'm not saying it's going to be the only solution. I hope it's not going to be the only solution, otherwise everybody will do the same as me and that’s not a winning solution either, right?

"But we believe it's right to a point, and all of us collectively need to find a way because 2.5 tonnes and €70,000 euros is not the solution for everyone – at least not in my world."