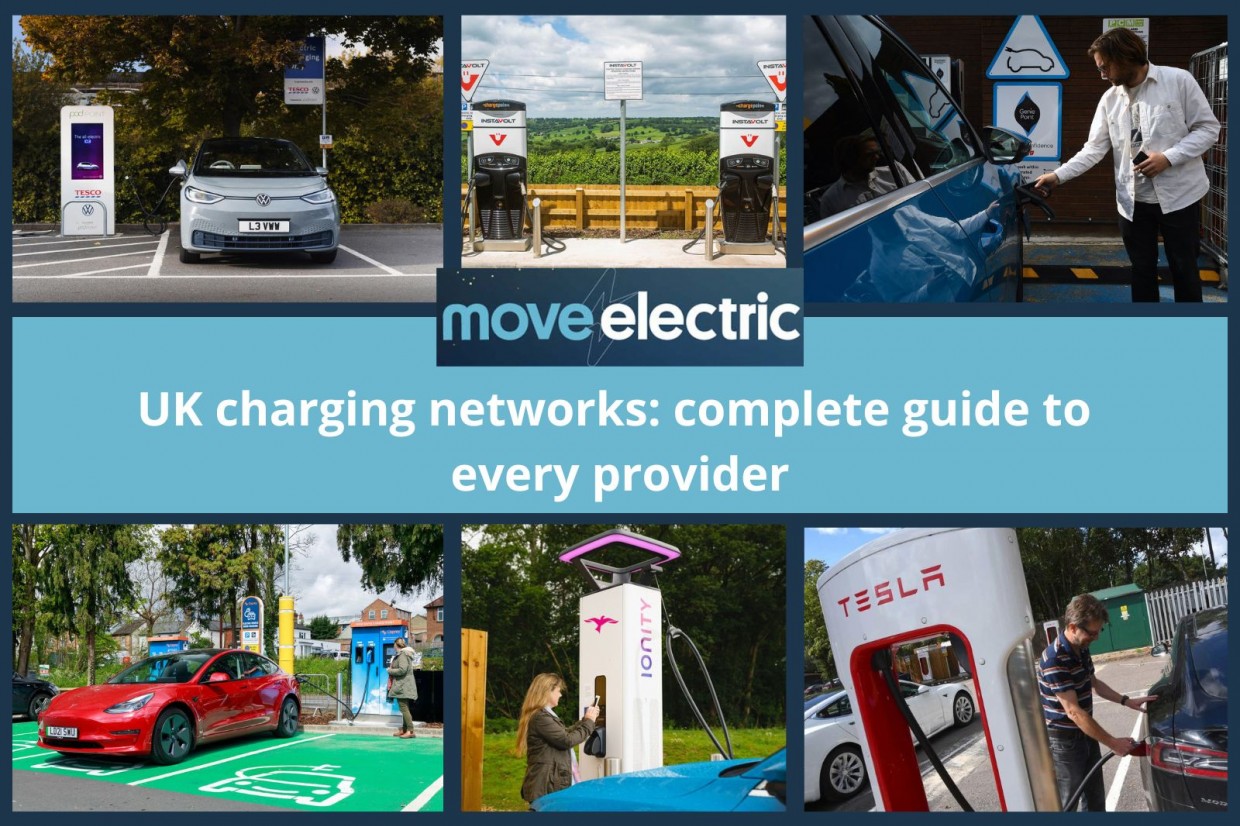 See a petrol station and you'll know in a second how much you'll pay for the fuel (a lot...), and you can take for granted you'll be able to pay using contactless. If only the same were true of electric car charge points...

To help, John Evans has compiled this guide to the major electric vehicle charging operators in the UK, outlining not only their tariffs and how they accept payment but other things including charger speeds and coverage.

The tariffs we quote were current in early June 2022, but are subject to change. At any location, don't forget to check penalties for overstaying, which can seriously bump up the cost of a charge. Also, beware using ultra-rapid chargers with speeds up to 350kW. If your car can't accept that power, and few can, you'll be wasting your money.

We're pleased to see the option of contactless payment is becoming more widespread, especially at rapid chargers. However, much as we dislike barriers to pay as you go, it is still worth checking if company membership is offered: the benefits it brings can be considerable.

Regarding charger availability and coverage, the quality and reliability of a company's chargers is probably more important than how many it claims to have. In this respect, smaller operators including InstaVolt and Osprey perform well in surveys including, most recently, by our sister title What Car?

It's still a bit of a jungle out there but with a little thought and planning you can make charging your EV a less unpredictable experience, starting here.

BP Pulse
One of the country's largest charging networks aims to please with a range of straightforward payment plans including contactless pay as you go plus slow to ultra-rapid chargers which, at their fastest, can get you back on the road in minutes. 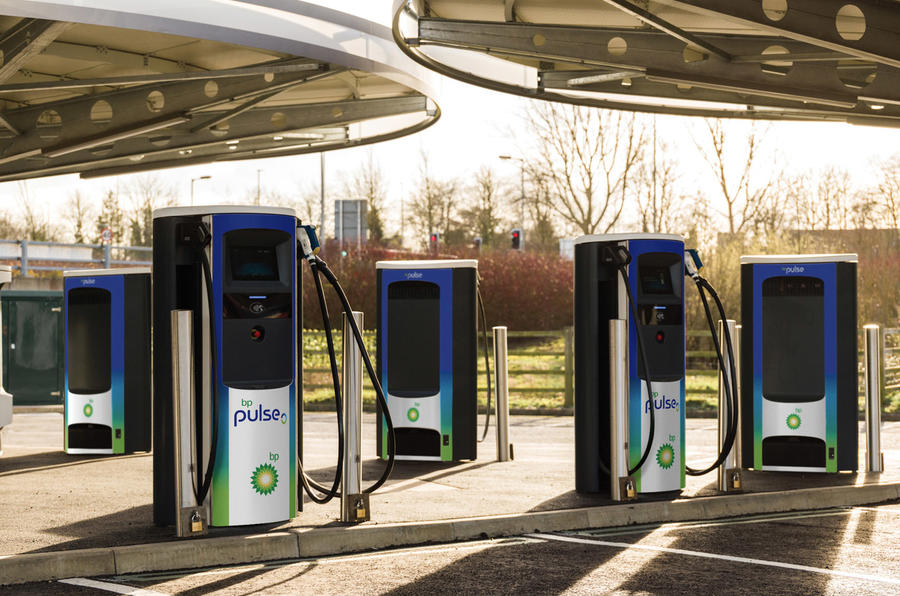 How many chargers: 9000-plus including 1200-plus rapid chargers
What type of chargers: AC, DC Rapid CCS and CHAdeMO
Charging speeds: 3-150kW
Key locations: BP forecourts and new charging hubs
Open to: All users
Tariffs: 35-59p/kWh depending on charging speed and whether a subscriber, free member or contactless-paying guest
How to pay: As a BP Pulse subscriber (£7.85 per month), a free member via BP Pulse app or as a contactless guest
We say: Good coverage but tariffs need care

Charge Place Scotland
The Scottish government's charging network ensures even the most remote areas of the country are covered but tariffs vary widely and are rising. 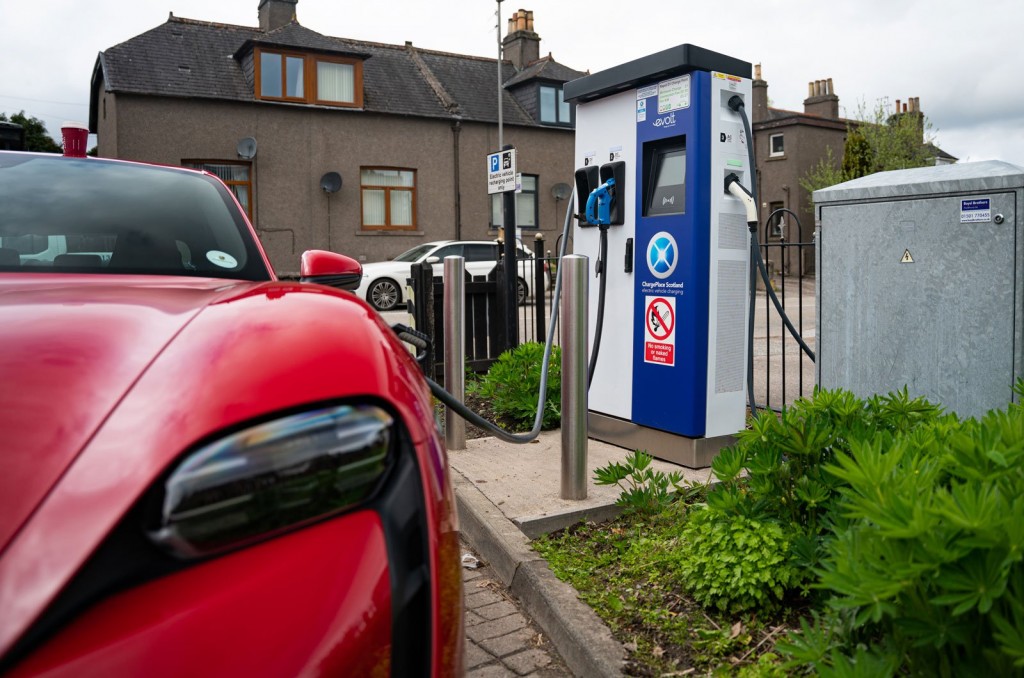 How many chargers: 2200-plus
What type of chargers: AC slow, AC fast and DC Rapid
Charging speeds: 3-50kW
Key locations: Car parks
Open to: All users who take out membership and also occasional users on pay-as-you-go basis
Typical tariff: 35p/kWh plus the occasional £1 connection fee and car parking fees where applied
How to pay: By charge card or for non-members, Webpay
We say: Impressive coverage but users report that signing up can be a drawn-out affair

Connected kerb
With a large network that's growing fast, Connected Kerb's secret is the kerbside location of its thousands of chargers. However, not all charge points are EV-dedicated so you may find an old petrol or diesel car in the charging space you want to use. How many chargers: 1000-plus
What type of chargers: AC Type 2
Charging speeds: 7-22kW
Key locations: Kerbside
Open to: All users with the app
Tariff: 35p/kWh
How to pay: With Connected Kerb app or RFID card
We say: Slow but competitively and straightforwardly priced

Geniepoint
The company behind the Revive network in the west of England, Dragon in Wales and Engie in West Yorskhire aims to make charging as easy and pain-free as possible but note its two-pence surcharge for non-members using pay as you go. 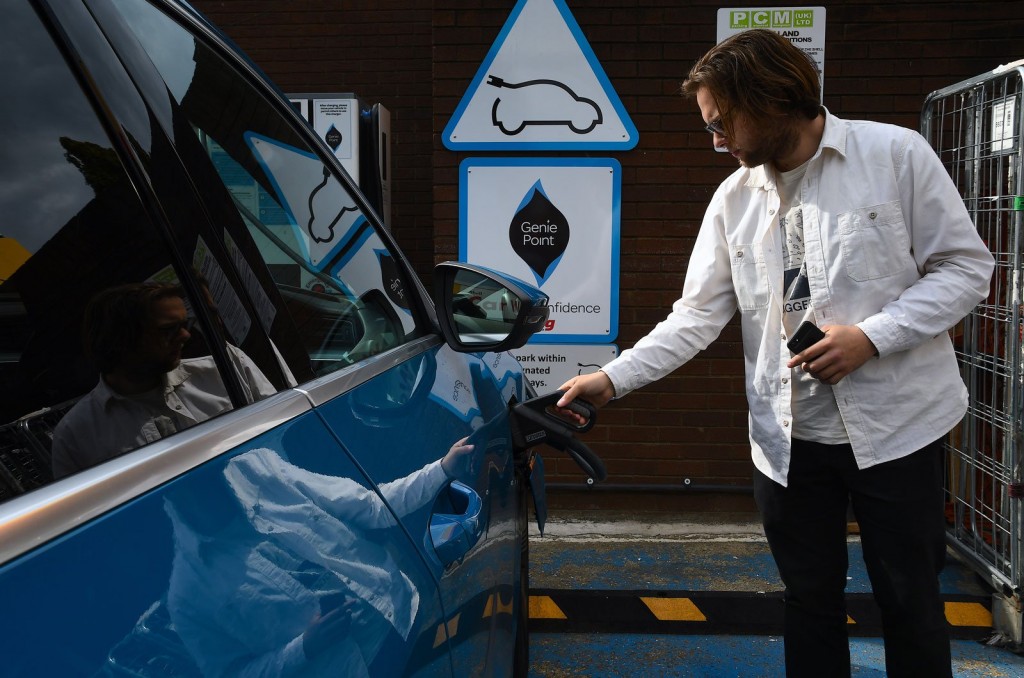 How many chargers: 800-plus
What type of chargers: AC Fast and AC Rapid Type 2, and DC Rapid CCS and CHAdeMO
Charging speeds: 7-50kW
Key locations: Supermarkets and increasing numbers of Premier Inn hotels
Open to: All users who register online or via the mobile app
Average tariff: 48p/kWh registered users and 50p/kWh for all others
How to pay: Via the app or an RFID or GeniePoint card, or contactless where possible
We say: Good coverage but two-tier pricing disappointing

Gridserve
Like all charging companies, Gridserve has recently raised its prices. Even so, and if your car can accept it, you can fill up at 350kW for 50p/kWh which, if you're in a hurry, isn't bad and certainly less than filling a comparable petrol or diesel car. Paying for it is simple, too. 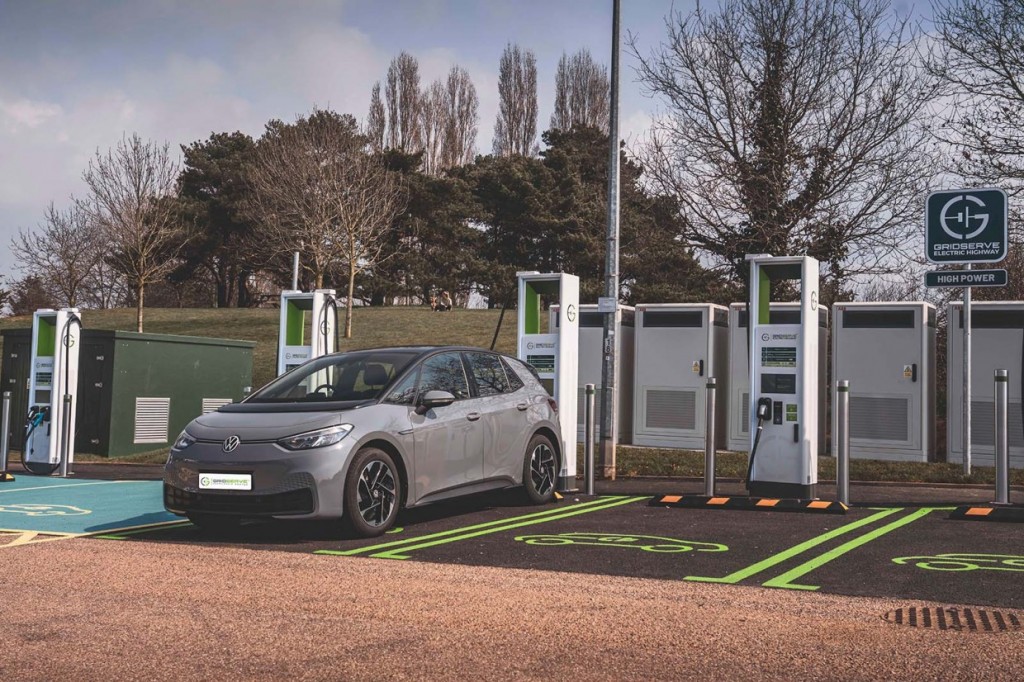 How many locations: 150-plus
How many chargers: 550-plus
Type of chargers: AC, DC Rapid CCS and CHAdeMO
Charging speeds: 7kW-350kW
Key locations: Motorways
Open to: All users
Tariffs: 39-50p/kWh depending on charging speed
How to pay: Contactless
We say: Convenient and reliability improving as network is upgraded

InstaVolt
With a flat rate of 57p/kWh InstaVolt is clearly not the cheapest but on the plus side, it rates among the top three companies for its chargers' reliability, ease of use and neighbouring facilities. 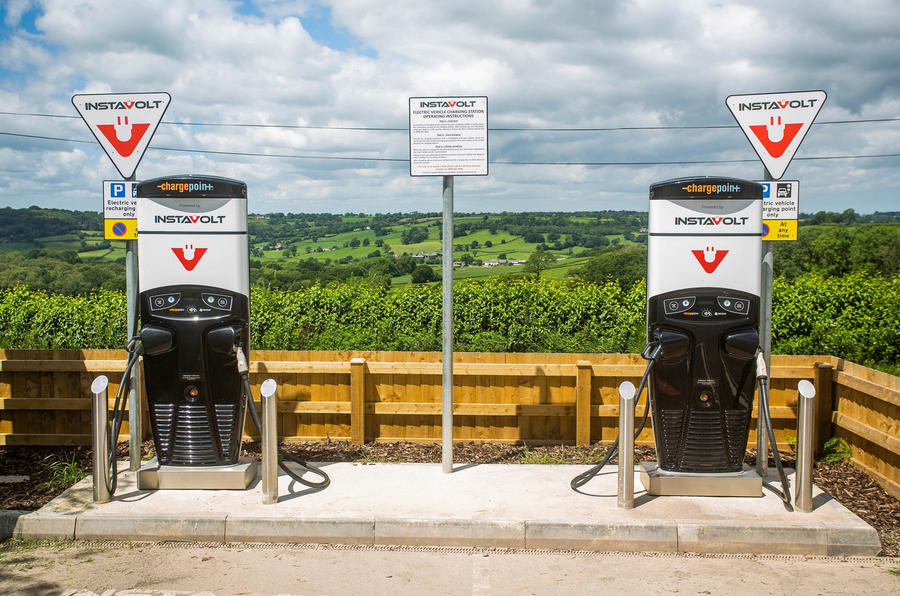 How many locations: 370-plus
How many chargers: 950-plus
What type of chargers: DC Rapid CHAdeMO, CCS1 and CCS2
Charging speeds: 50-150kW (possible to upgrade to 350kW in the future)
Key locations: Many major fast-food and coffee outlets and service stations
Open to: All users
Tariff: 57p/kWh
How to pay: With InstaVolt app or as a contactless guest
We say: Pricey but quality was never cheap

Ionity
Aimed at the high-mileage driver looking for convenience and speed, Ionity doesn't pretend to be the cheapest but deserves credit for its Ionity Passport offer which, for £16.99 per month, halves the tariff. 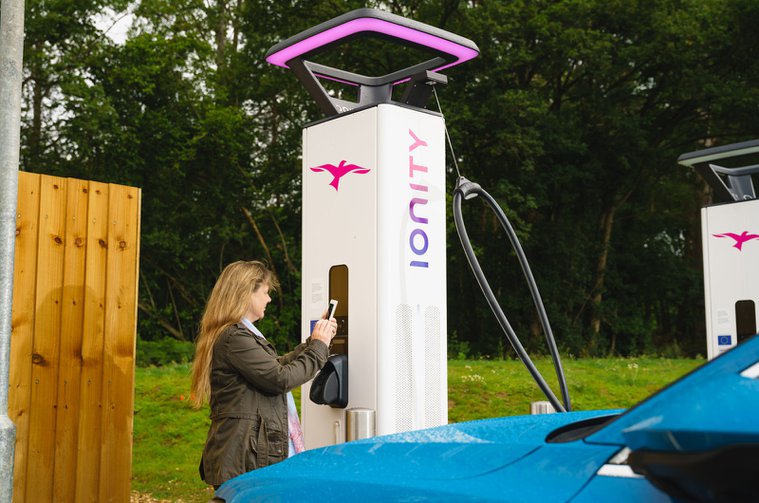 How many locations: 18-plus
How many chargers: 90-plus
What type of chargers: DC Rapid CCS
Charging speeds: Up to 350kW
Key locations: Motorways
Open to: All users via no-fee Ionity Direct or Ionity Passport
Tariffs: 69p/kWh or 35p/kWh for users subscribing to Ionity Passport at £16.99 per month
How to pay: With Ionity app
We say: Fast if your car can accept it but expensive and coverage not great

Osprey
Whether you pay contactless, RFID or via the app, Osprey charges the same 49p/kWh and while it's not the biggest player in the market, at least its chargers are conveniently located – even at pubs. 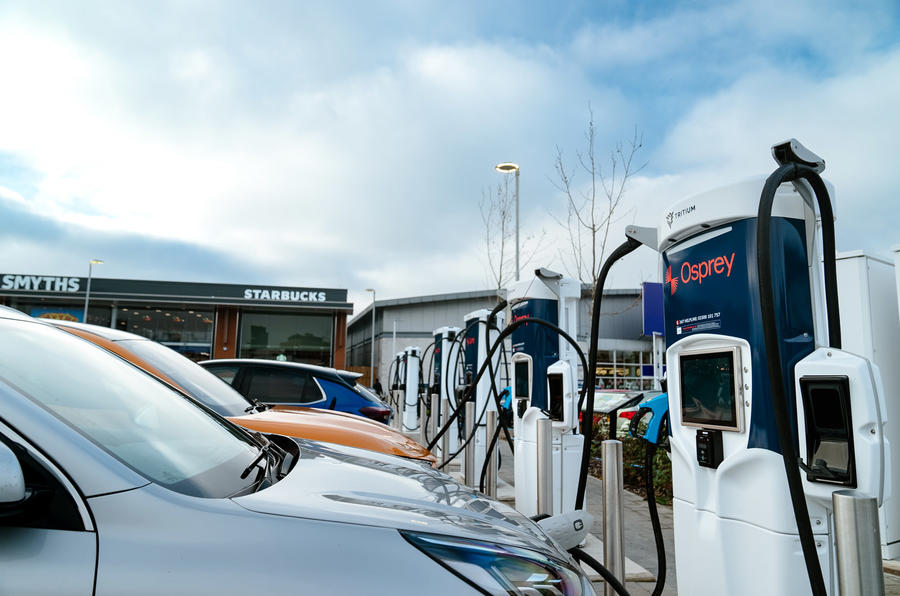 How many locations: 200-plus
How many chargers: 350-plus
What type of chargers: DC Rapid CCS and CHAdeMO
Charging speeds: 50-175kW
Key locations: Supermarkets, fast-food outlets car parks and Marston pubs
Open to: All users
Tariff: 49p/kWh
How to pay: With Osprey app, as a contactless guest or with an RFID card
We say: Fair pricing and convenient locations but don't drink and drive

Pod Point
One of the country's largest charging networks is also one of the cheapest. It's recently teamed up with VW to offer all EV drivers free 7kW and 22kW charging at 500 Tesco stores (50kW costs 28p/kWh). Shell Recharge
With its network of filling stations, Shell has an advantage over rivals. It's beginning to exploit it, too, rolling out more of its rapid chargers to existing locations and even creating all-new EV charging 'hubs' such as its first one in Fulham, London. 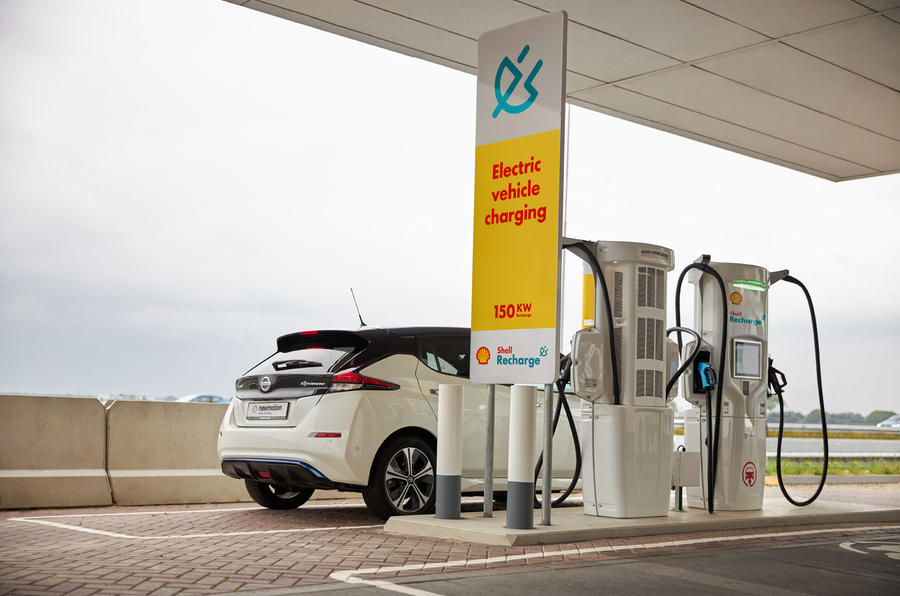 How many locations: 120-plus
How many chargers: 140-plus
What type of chargers: AC Rapid Type 2 and DC Rapid CCS and CHAdeMO
Charging speeds: 50-150kW
Key locations: Shell forecourts and new charging hubs
Open to: All users
Tariff: 55p/kWh (rapid), 59p/kWh (ultra-rapid)
How to pay: With Shell Recharge app and card or as a contactless guest
We say: Not the cheapest but exclusive EV charging hubs are an exciting development

Source London
You must book your charging bay in advance but at least you're assured that rare thing in London, a parking space, at least while you charge. There's a complicated tariff structure that rewards residents but punishes pay as you goers. 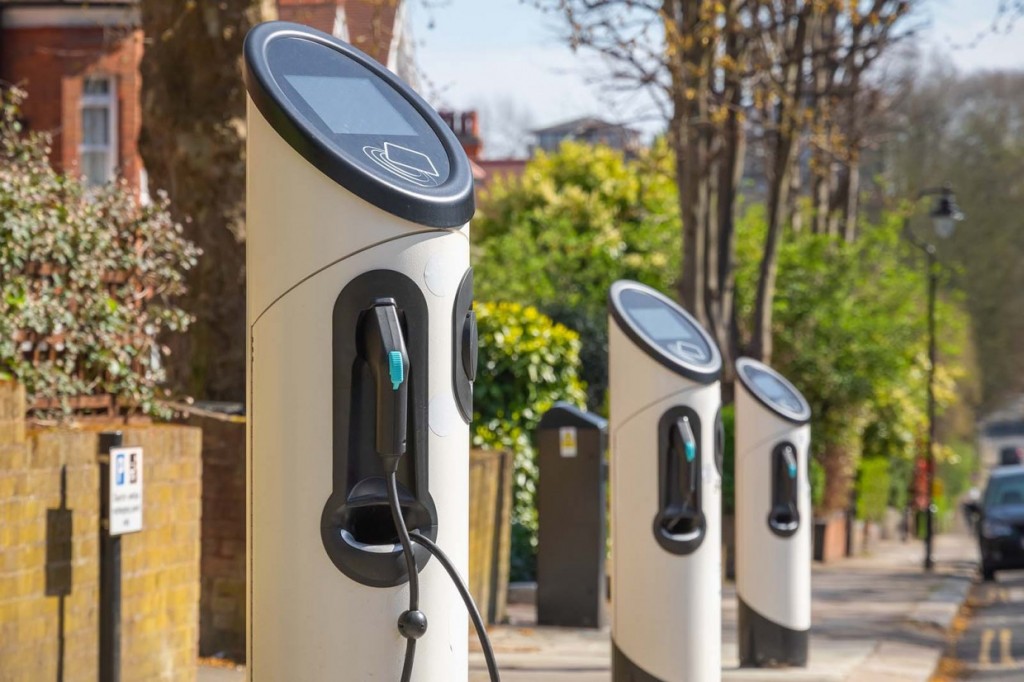 How many chargers: 1700-plus
What type of chargers: AC Type 1 and 2
Charging speeds: 3-22kW
Key locations: London streets
Open to: All users who book in advance
Tariffs: Resident account holders from £4 one-off fee and 39p/kWh to 89p/kWh 'pay as you go' in Central London
How to pay: With an account or contactless
We say: Park 'n' charge is attractive, complicated tariff structure less so

Tesla Supercharger
Unless you're a Tesla driver you may not realise there are two Tesla charging networks: the familiar Supercharger one you see in the nicer parts of service station car parks and the Destination network located at hotels and shopping centres (not covered below).

Tesla has recently opened up parts of its Supercharger network to non-Tesla users, although they pay more for their power or a bit less if they take out a subscription. Destination chargers are free, although parking fees may apply and in the case of a hotel, for example, may also be reserved exclusively for guests. 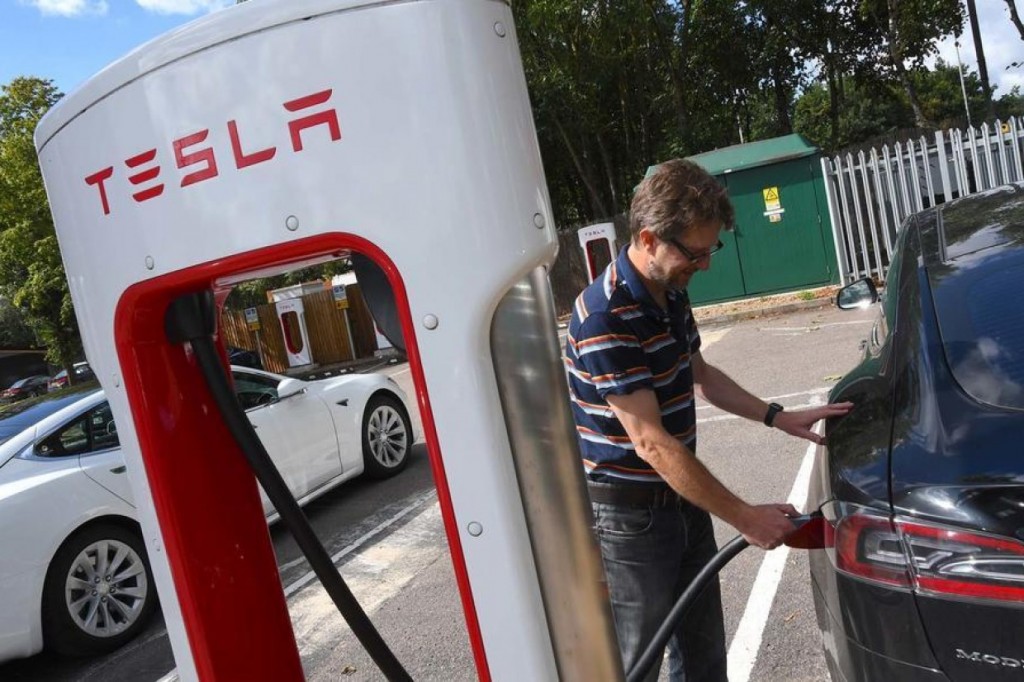 How many locations: 90-plus (15 available for non-Tesla users)
How many chargers: 900-plus
What type of chargers: Type 2 for pre-facelift Models S and X and CCS for all current models and non-Tesla users
Charging speeds: 150-250kW (at V3 Superchargers), depending on location
Key locations: Major routes (Supercharger)
Open to: Tesla users and at selected locations to non-Tesla users with a Tesla account
Average tariff: 47p/kWh for Tesla users (free for Models S and X registered prior to 2 November 2018 and cars registered between August 2019 and May 2020), 60p/kWh for non-Tesla users
How to pay: With the Tesla app
We say: The benchmark for charging companies but roll-out of new stations must keep pace with demand

Ubitricity
Part of Shell Recharge, Ubitricity is based mainly in London, providing a cheap and convenient kerbside charging solution for residents and visitors. Whereas rival Connected Kerb has dedicated charging posts, Ubitricity uses existing lamp posts, inside which it has installed its chargers. Note the 35p per charge session fee on top of the 32p/kWh tariff. How many chargers: 5000, mostly in London
What type of chargers: AC Type 2
Charging speeds: Typically 5.5kW
Key locations: Kerbside
Open to: All users
Tariff: 32p/kWh plus 35p connection fee per session
How to pay: With Direct Access (scan the QR code on the charger with your smartphone and pay by credit card) or the Shell Recharge app
We say: If you don't have a driveway, Ubitricity may have the answer