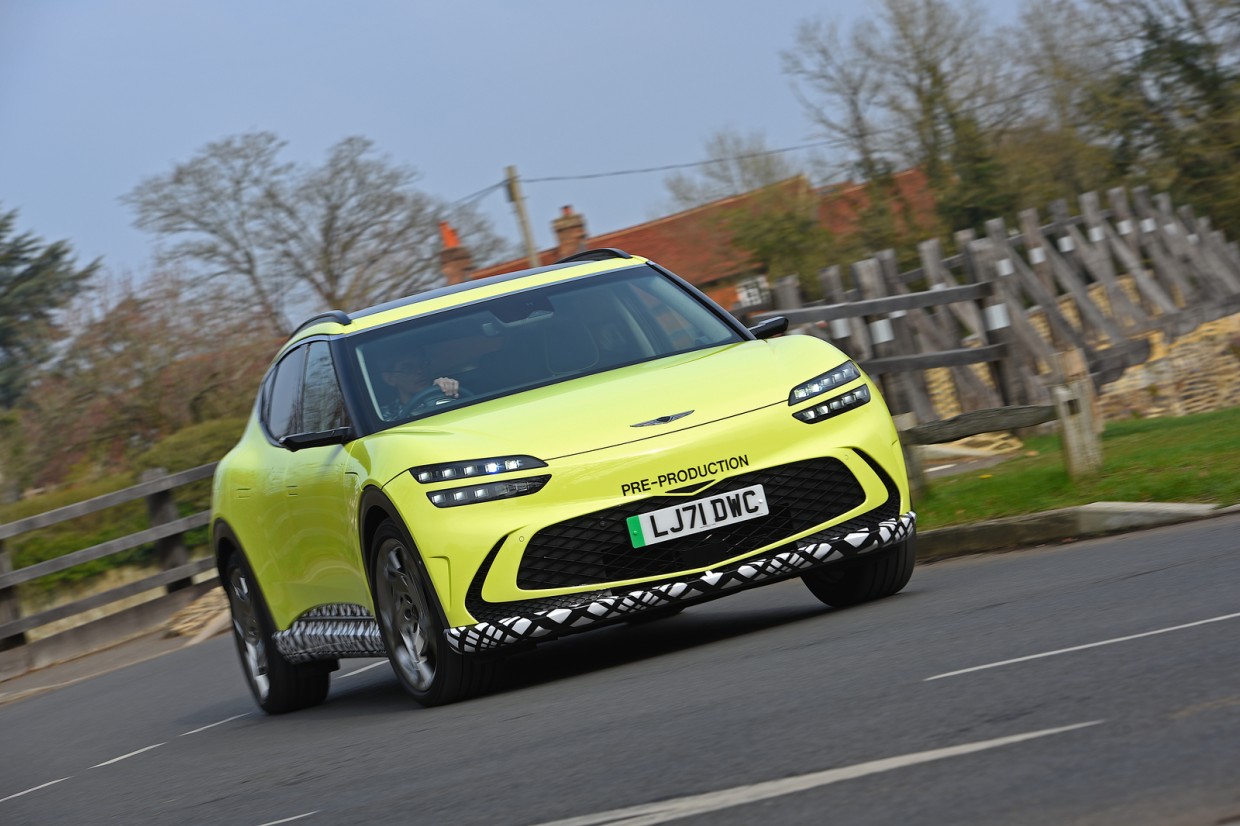 Sell it to me in a sentence
The Genesis GV60 is the first bespoke electric car from the Hyundai Motor Group’s new premium brand.

It’s very yellow…
That’s Sao Paolo Lime, actually. And yes, it is bright. Very bright. You might remember that we had a close-up look at the GV60 in a photo studio a few months back. The paint seemed bright then, but we can assure you that it looks even more vivid in the wild. We actually quite like it, although if you’re not quite bold enough to order one in that colour then you’ll be glad to know other colours are available.

What’s with the weird pattern at the bottom?
That’s a spot of camouflage wrap, even though we’ve already seen the GV60 without it. It’s largely there to illustrate that this is a pre-production model, and therefore isn’t entirely representative of the finished version that will go on sale later this year. Another clue: it has stickers reading PRE-PRODUCTION on the front and back, in capital letters and everything. 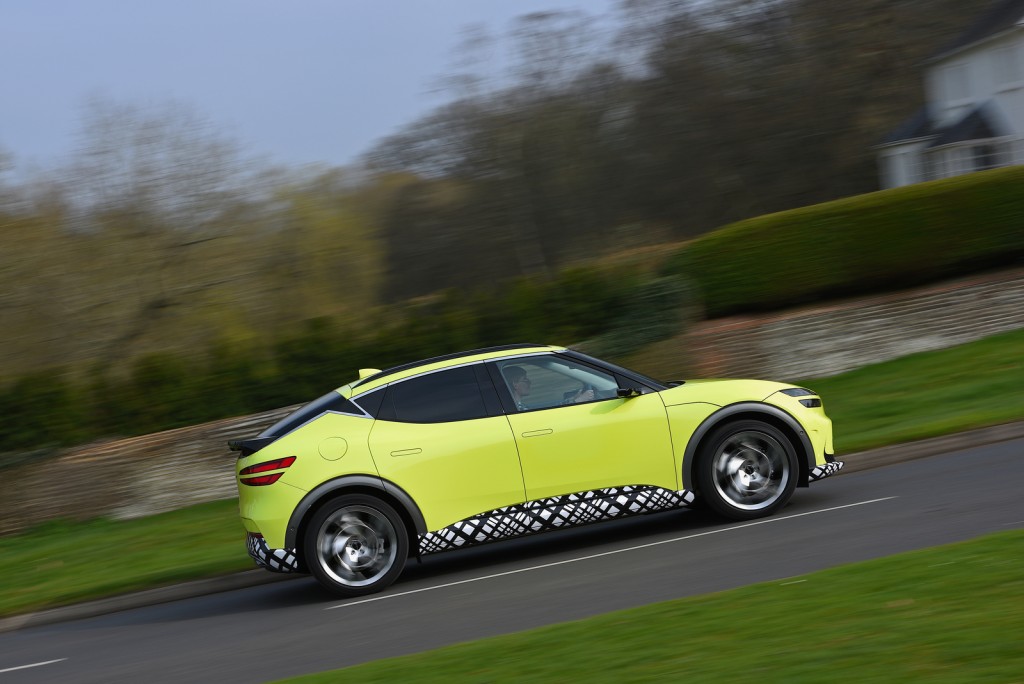 Is that why there’s no star rating?
Exactly. While our limited time in the GV60 has given us a good idea what to expect, Genesis is still working on the model to tune it for UK roads. For example, the suspension and settings on the prototype we drove are a apparently a mash-up of American and Korean. Sort of the Korean Fried Chicken of suspension settings, if you will, although doubtless not as tasty.

Mmmm, fried chicken…
Time for that later. Don’t you want to know about the GV60?

The GV60 is shaping up to be a key model for the brand. If you haven’t heard of it yet, Genesis has been around as a standalone brand for a few years, but it only expanded into the UK in 2021 – and even then, it’s only really been active in a handful of regions.

Basically, the brand is the Hyundai Motor Group’s attempt to take on brands such as BMW and Audi, although there’s a distinct Korean tinge to its take on the premium car formula. For example, Genesis is putting a major emphasis on personalised service: it won’t have any showrooms, but you can request a car for a test drive. You’ll then be appointed a dedicated Genesis assistant, who’ll be your point of contact whenever you need any help at all with your car, at any point of its life.

So far, Genesis has only launched petrol-engined cars in the UK, including the G70 and G80 saloons and GV70 and GV80 SUVs. Electric versions of the GV70 and G80 are on the way.

So how does the GV60 fit in with the range?

While the model name might not give it away, the GV60 is a substantial departure from the machines that have come before it. It’s an electric-only model, for one thing, and takes the form of a crossover that’s slightly smaller than the GV70. Although it’s still pretty big. 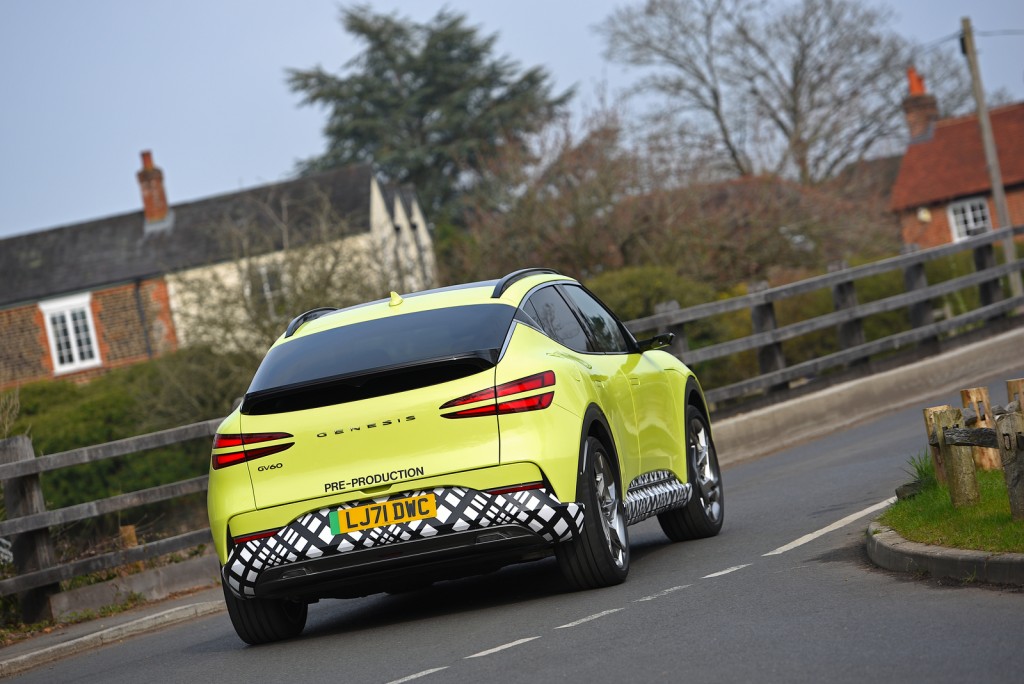 It also introduces a fresh design language for Genesis, which has cues from the other models but takes things in a new direction. For example, it’s got a reworked version of the Genesis badge, and slightly softer, more rounded styling. It feels a little younger and fresher to our eyes, which seems to fit both the Korean cool demographic it’s aiming for and likely EV buyers.

It's certainly attention-grabbing: the unusual car, bright lime paint, camo strips and pre-production labelling caused plenty of passers-by to stop for a look when Move Electric was out taking photographs. True story: one person looked at the winged badge and the styling, and asked if it was a new electric car sub-brand from Aston Martin. When told Genesis was part of the Hyundai Motor Group, the surprise on his face would be best described using an exploding head emoji...

The big news about the GV60 is that it’s the first Genesis model built on the Hyundai Motor Group’s E-GMP bespoke electric platform. That’s a great starting point for a car: the two other models to use it so far are the Kia EV6 and the Hyundai Ioniq 5 – which, as you doubtless know, just won the Best Electric Car prize in the Move Electric Awards 2022 in partnership with OVO Energy.

Move Electric Awards 2022: all the winners and video

The E-GMP platform is a really good starting point for an EV: it’s got a flat floor and is highly scalable allowing for cars with lots of room inside, can accept a variety of powertrain layouts and has an 800V architecture that allows for ultra-fast charging at speeds of up to 350kW. 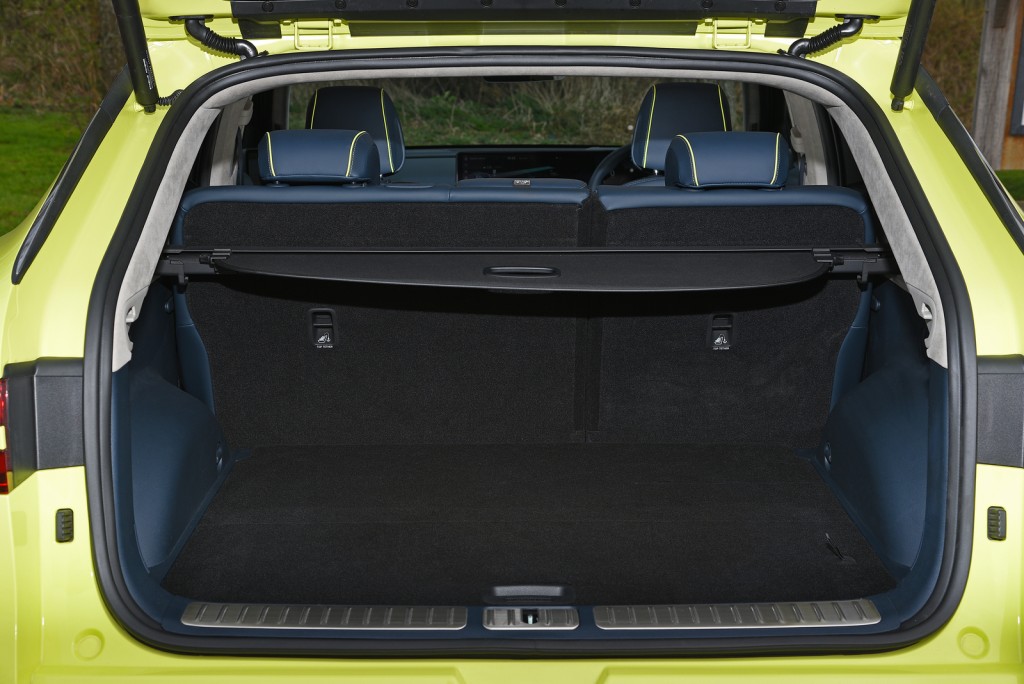 So how does the GV60 stack up compared to the Ioniq 5 and EV6?

Like both those cars, the GV60’s design can play havoc with your sense of scale. It’s considerably bigger in the metal than you might expect from the pics – although it’s actually smaller than both of its E-GMP relations: at 4515mm long it’s around 100mm shorter than both the Ioniq 5 and EV6.

Don’t think this is a small crossover though: that still makes it around the size of the Audi Q4 e-tron and the Volkswagen ID 4. You can feel the size on the road, although with a raft of sensors and driver assistance systems it’s pretty easy to thread through even narrow streets. The size is also apparent inside, with the GV60 feeling comfortable and spacious. 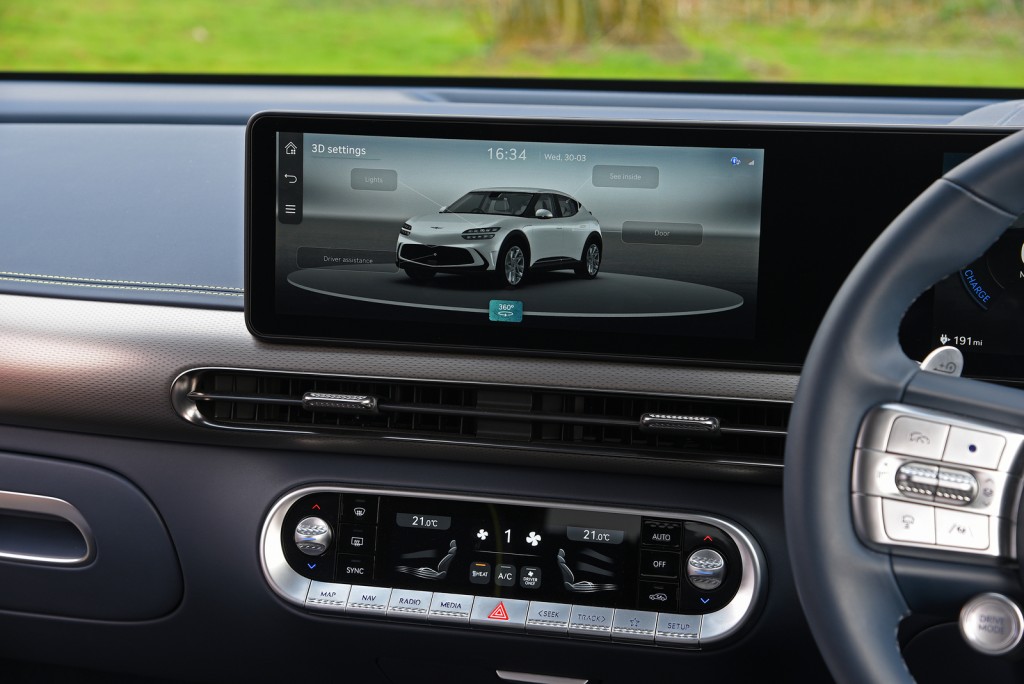 Does the interior stack up to the premium aspirations?
There’s no doubt the GV60 offers a slightly different take on the premium formula than its German rivals, but that’s not a bad thing as the interior demonstrates.

We’ll be honest: there’s definitely a family resemblance with the Ioniq 5 in terms of the twin-screen-dominated dashboard layout and ‘floating’ centre console between the front seats. But there’s enough to set it apart: our test car featured plenty of blue Nappa Leather trim to add an upmarket feel, while the physical buttons and switches (of which there are a pleasing number) are were finished in nice shiny metal.

While the Ioniq 5 has a minimalist, thin steering wheel, the GV60’s version is chunky and button-laden. It’s quite reassuring to hold, too. 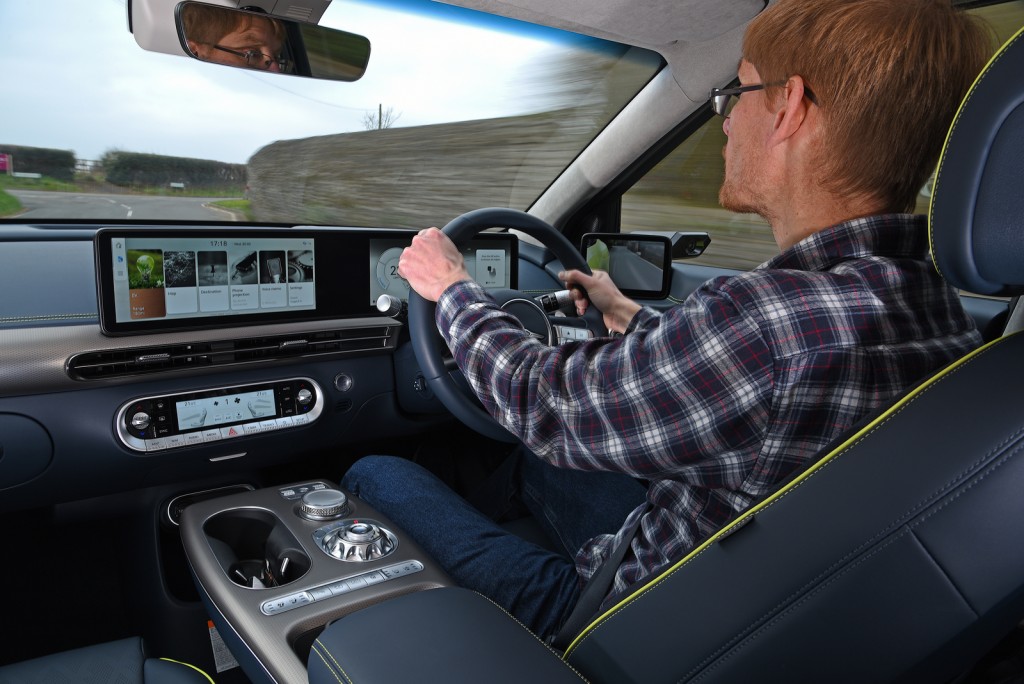 The infotainment has been reworked for Genesis, and features a variety of special functions such as a ‘Quiet Mode’ that isolates the audio settings for certain seats, and various personal assistant functions. The system is intuitive and easy to navigate, either via touchscreen of a rotary controller. Most of the car’s settings are accessed using it, including the artificial motor sound selector. Yes, you can choose what noise the GV60 makes when it drives.

The attention-grabbing design element of the interior is the rotating crystal sphere, which sits in the middle of the centre console glowing like a prize on offer in The Crystal Maze until you press the start button, when it flips round to reveal the drive select controller. Gimmicky? Absolutely, but we quite enjoyed it - and it’s genuinely useful to know if the GV60 is ready to drive or not.

Okay, so what is it like to drive then?
The GV60 range will start with single-motor, rear-drive machines, but for our first taste we got to sample the top Sport Plus spec. That features two 160kW (215bhp) motors, which combined to offer 320kW, which increases to 360kW if you press the Boost button on the steering wheel. It’s the most powerful E-GMP model we’ve yet driven, and has a predictably switch 0-62mph time of 4.0secs. 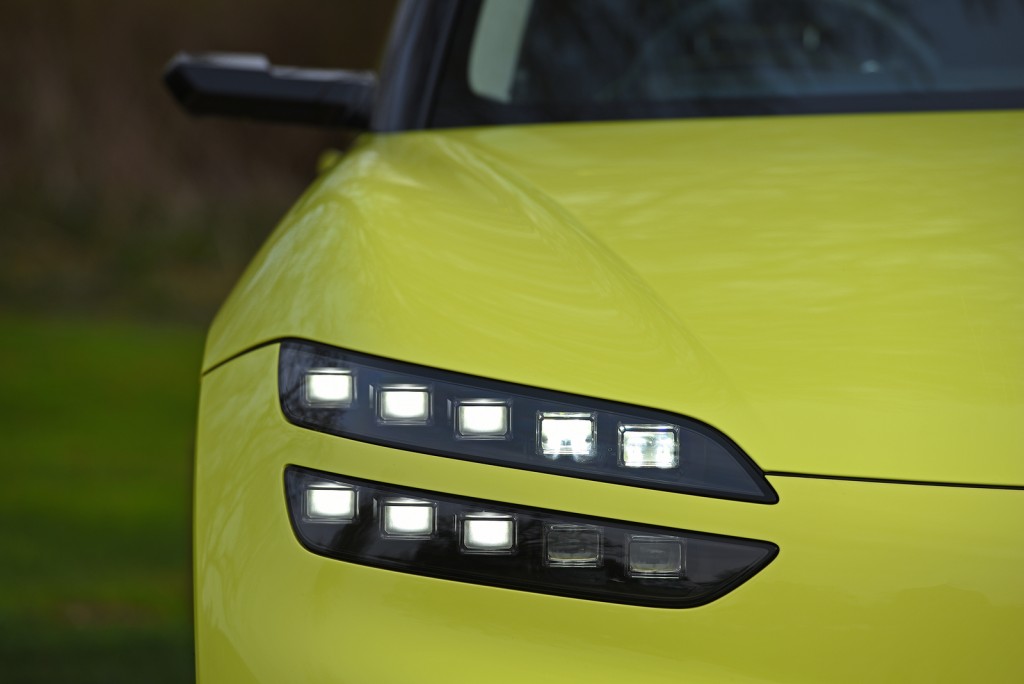 Predictably, the performance is best described as ‘brisk’. It’s fast to accelerate in Normal mode, keen in Sport and a little bit nuts if you do use that Boost button. The powertrain is easily responsive, and you can quickly call upon amble power whenever you want.

Not that driving the GV60 is all about using all that power: it’s just as happy and responsive cruising at slow speeds around town. It feels very stable, and the ride was generally decent on smooth surfaces. If did feel a little unsettled on the rougher stuff, which could well be down to that unfinished suspension set-up. That said, we also suspect the sizeable 21in tyres didn’t help.

The steering has more weight to it than the Ioniq 5, which is likely a bit of tuning to make it feel a bit more stately and premium. As with that car, it’s still not the most engaged, but it was consistent, reliable and relaxing on prolonged use.

All-round visibility is generally good, and it’s easy to place on the road. We weren’t necessarily sold on the optional digital wing mirrors on our test car, but that’s likely as much about adjusting to the new technology as anything.

So is it really an alternative to established premium firms?

It certainly feels like it. More so than any of Genesis’s combustion-engined cars that have reached the UK so far, the GV60 actually seems to offer a distinctive blend of luxury, Korean cool and impressive tech. It’s a compelling package that stands out if you’re after something a bit different. You’ll likely turn some heads even if you don’t go for the Sao Paolo Lime paint.

At £65,405 this Sport Plus version isn’t cheap, although you do get a car that mixes both incredible performance and luxury for that. The entry-level versions start from £47,005.

Again, we’ll leave a full rating for now, until we can try the GV60 more extensively in its finished state. But it’s already clear this is shaping up to be an excellent car, and a refreshingly different take on the premium formula. It has all the strength of the E-GMP platform, and a dash of luxury to boot.

But the biggest challenge the GV60 faces might not be convincing people away from established premium brands, but from within the Hyundai Motor Group. The Ioniq 5 and EV6 arguably have already moved Hyundai and Kia up the car manufacturer pecking order, with performance and design credentials that can win over buyers from some of those premium firms.

Genesis will have to convince people that it’s worth paying a premium over those two models for the GV60. That said, the GV60 is shaping up to be a refreshing take on the premium electric crossover.