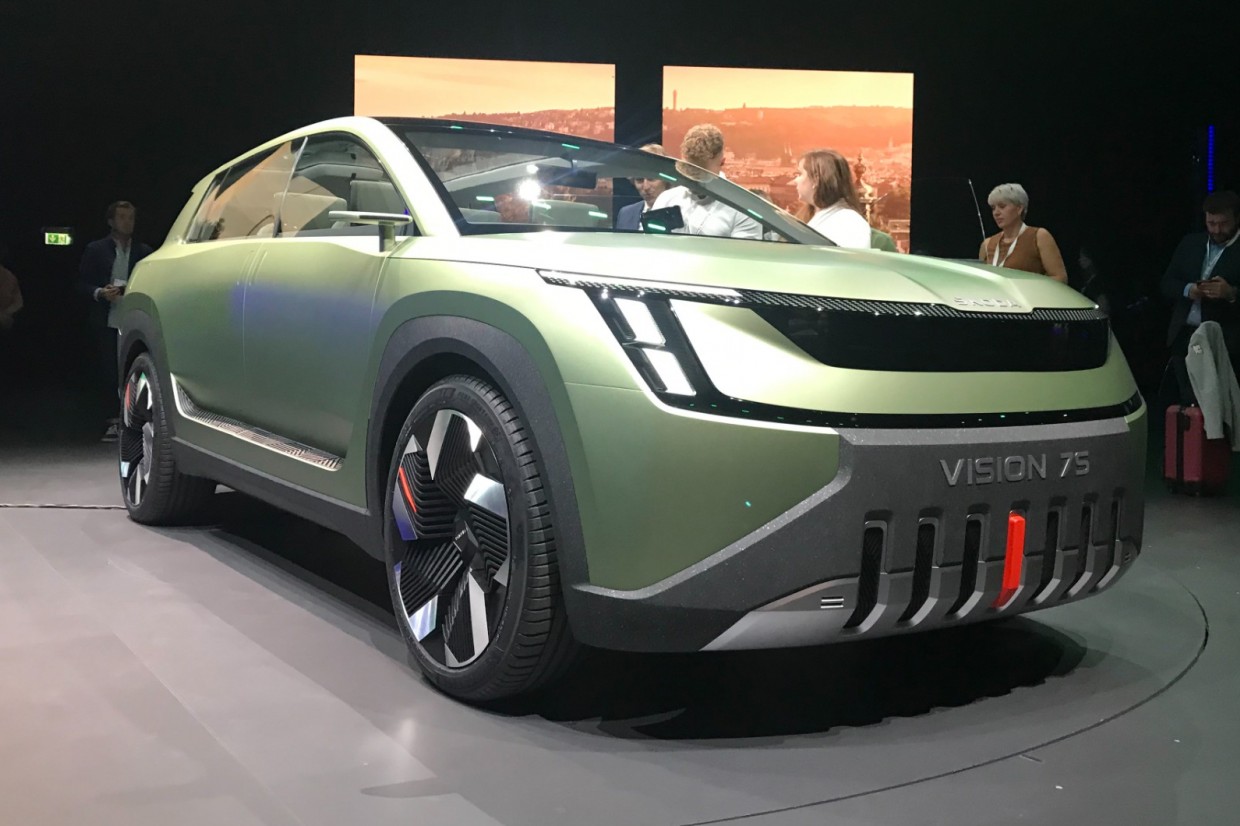 This is the Skoda Vision 7S concept, which previews an electric seven-seat SUV due to arrive within the next three years – and showcases a whole new design language for the brand.

The production version of the Vision 7S will be one of three new electric models that the Czech firm will launch by 2026, alongside the much-anticipated ‘entry level’ hatch and a small SUV. All three models will use the Volkswagen Group’s bespoke electric MEB platform, which is also used by the existing Skoda Enyaq iV and Skoda Enyaq Coupe iV. 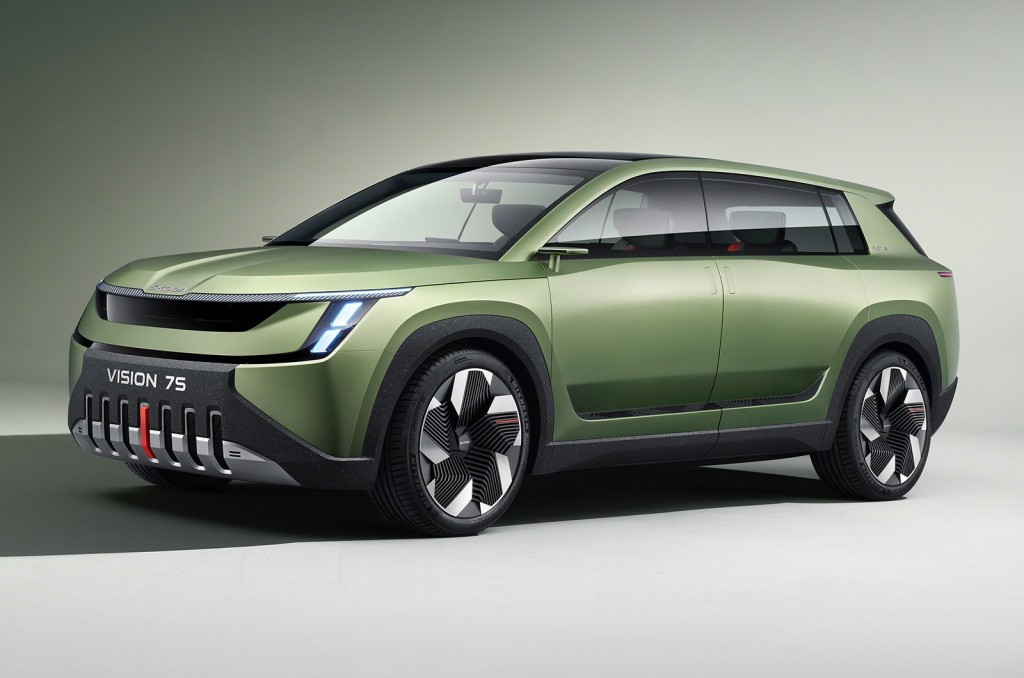 News, reviews and features in your inbox: subscribe to the FREE Move Electric newsletter

Those models will all carry the new-look design language demonstrated by the Vision 7S concept, which goes far beyond the styling elements that will be used by Skoda’s cars: there’s also a new logo, a new ‘corporate identity’ and even new official colours.

It’s all part of Skoda’s boldly titled ‘Next Level – Skoda Strategy 2030’ plan, under which the firm is investing £4.8 billlion in e-mobility and £600 million in digitalisation in the next five years, with a commitment for all-electric vehicles to comprise more than 70 per cent of its sales total by 2030.

It’s quite a lot to take in, really. So let’s run through it all.

The Vision 7S will sit about the Enyaq iV at the top of Skoda’s electric vehicle range. While Skoda hasn’t given out the full dimensions it will be the firm’s largest electric model, and will use the longest possible version of the MEB platform. We’d suspect it will be broadly in line with the extended wheelbase Volkswagen ID Buzz in terms of platform dimensions. It will feature a large 89kWh battery under the floor – the largest we’ve yet seen in an MEB model – which the firm says will give it a range of more than 372 miles (or 600km, if you want a nice round figure). It will be capable of charging at speeds of up to 200kW too.

Johannes Neff, Skoda’s technical development boss, said that the specifications of the Vision 7S “underline the technical possibilities of the Modular Electrification Toolkit”. 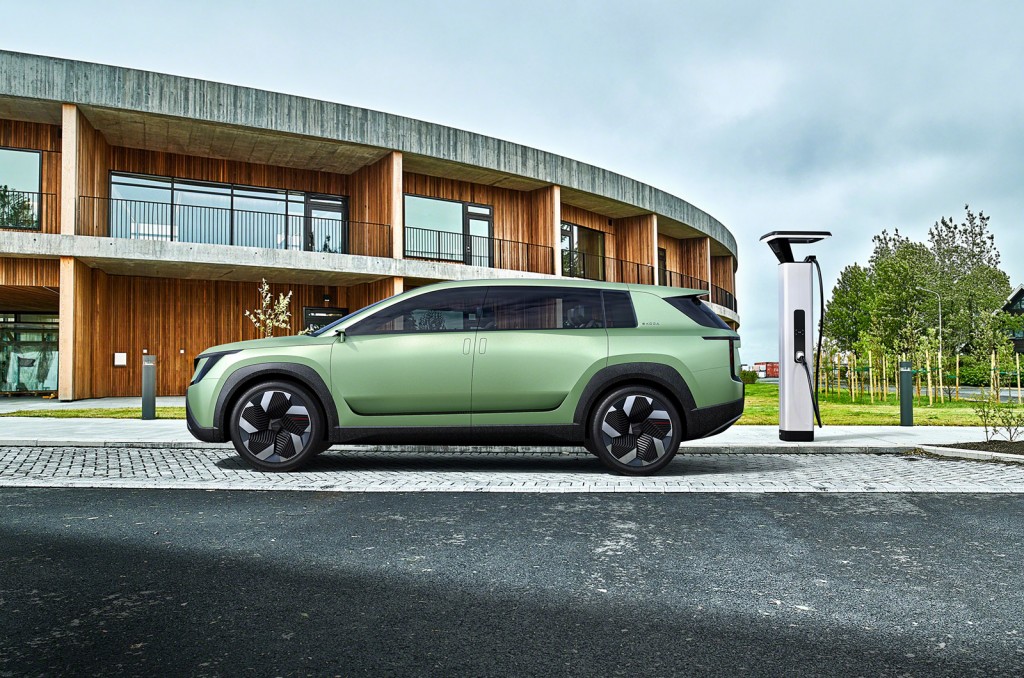 The exterior of the Vision 7S clearly shows off the firm’s new look, with new design language that the firm says is intended to combine “robustness, functionality and authenticity”.

Skoda’s design bold Oliver Stefani described it as “minimalist and functional”, adding that it “conveys a sense of security and radiates strength while at the same time enhancing the aerodynamics of the vehicles we’ll be adding to our portfolio in the future.”

Behind the scenes at Scoda's new battery systems plant

Most notably, the Skoda logo from the front ‘grille’ has gone, with the firm now writing out Skoda instead. While we’ve seen an increasing trend towards using lettering instead of logos on the boot of cars, Skoda is the firm firm to make the step at the front. 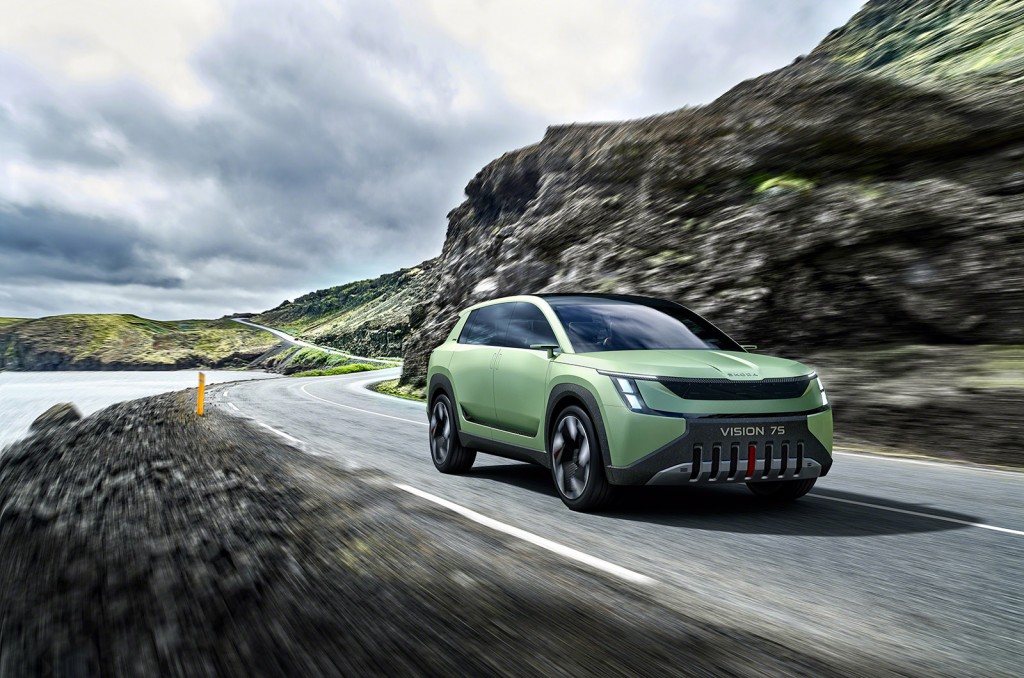 The new word mark sits above what Skoda calls its new ‘Tech-Deck Face’, which basically means there’s an ambient light strip that runs the full width of the vehicle. While it retains the same basic shape as previous Skoda grilles, the new design is flatter and wider, with a dark glass screen hiding the vehicle’s sensors, in place of the ‘ribbed’ grille seen on the Enyaq.

But the car isn’t entirely rib-free: there are seven distinctive vertical air outlets running across the front of the car, which direct air to the cooling system and brakes. They’re matched by nine air outlets at the rear of the car. There are other air outlets between the wheel arches and side skirts to channel the warm air from the battery to the outside. That’s complemented by narrow T-shaped headlights, a design mirrored in the lights on the rear of the car, the cameras that take the place of the traditional wing mirrors and the door handles. Notably, those door handle sit flush to the bodywork and pop out when they sense somebody is close. The rear doors also open backwards and there are no B-pillars, because this is a concept. Don't expect it to reach production like that. 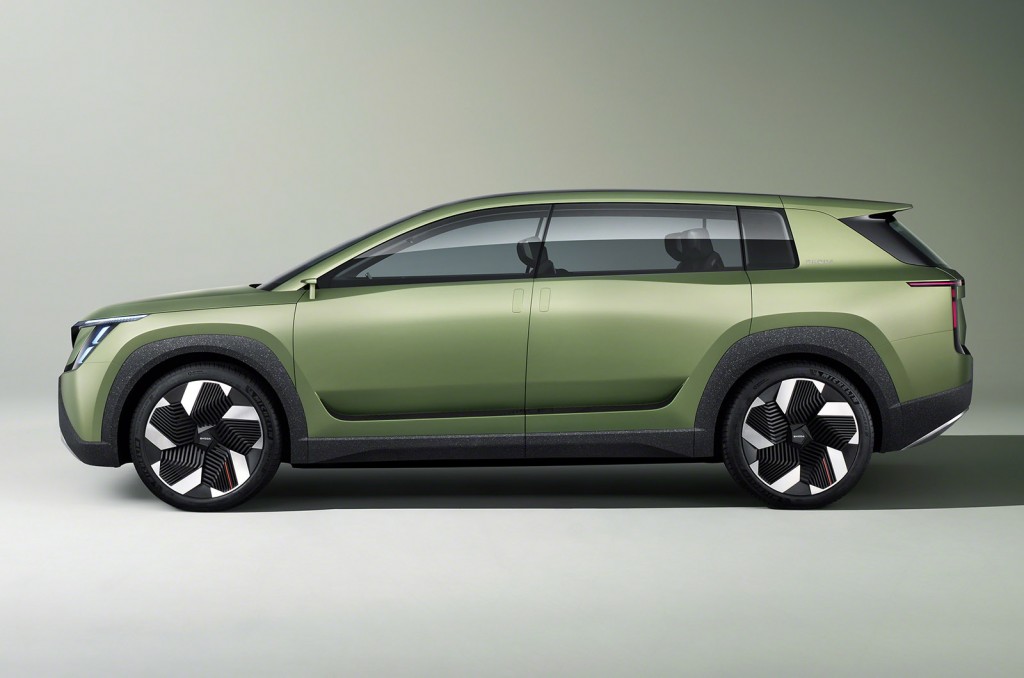 Complementing the look at new bumpers made from recycled tyres – one of numerous nods to sustainability on the car. The square wheel arches are also made from that material and sit above large 22in tyres (concepts always have large tyres, so expect smaller options on an eventual production model) with aero-optimised rims.

The interior: flexible space for driving and relaxing

The interior of the Vision 7S concept is designed to showcase what Skoda grandly calls “a complete reconceptualisation of the natural human-machine interaction”. By which we think the firm means that it’s got quite a flexible design that’s intended for both driving in and relaxing. 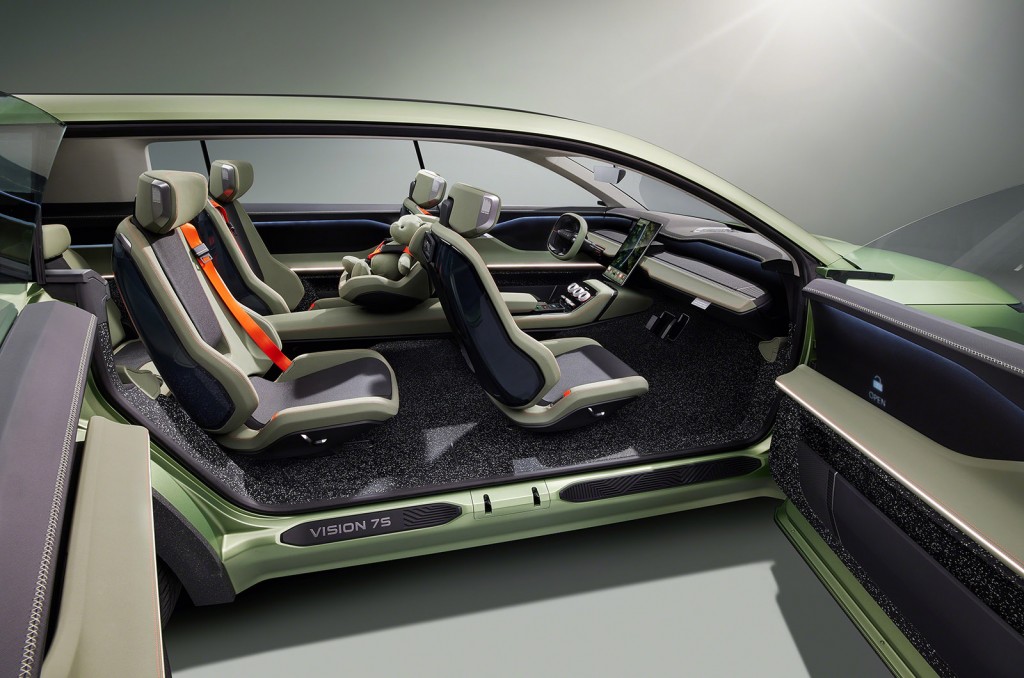 The concept offers two interior configurations: Driving and Relaxing. You can probably guess what each mode is for from the name.

In Driving mode, the controls are intended to be within each reach of the driver, and include a central 14.6in infotainment touchscreen that’s mounted vertically – the largest every installed in a Skoda model. When stopped you can press a big button in the centre console to switch to Relax mode. 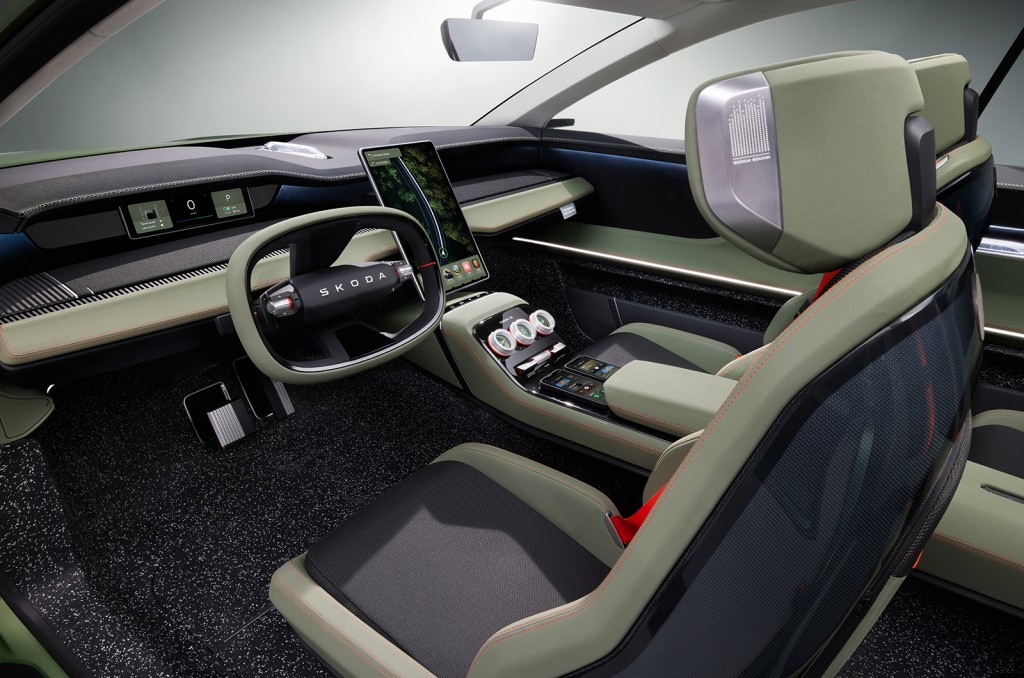 When that happens the steering wheel and instrument cluster slide away from the driver to create extra space, the touchscreen rotates to landscape and the front seats rotate inwards and recline. 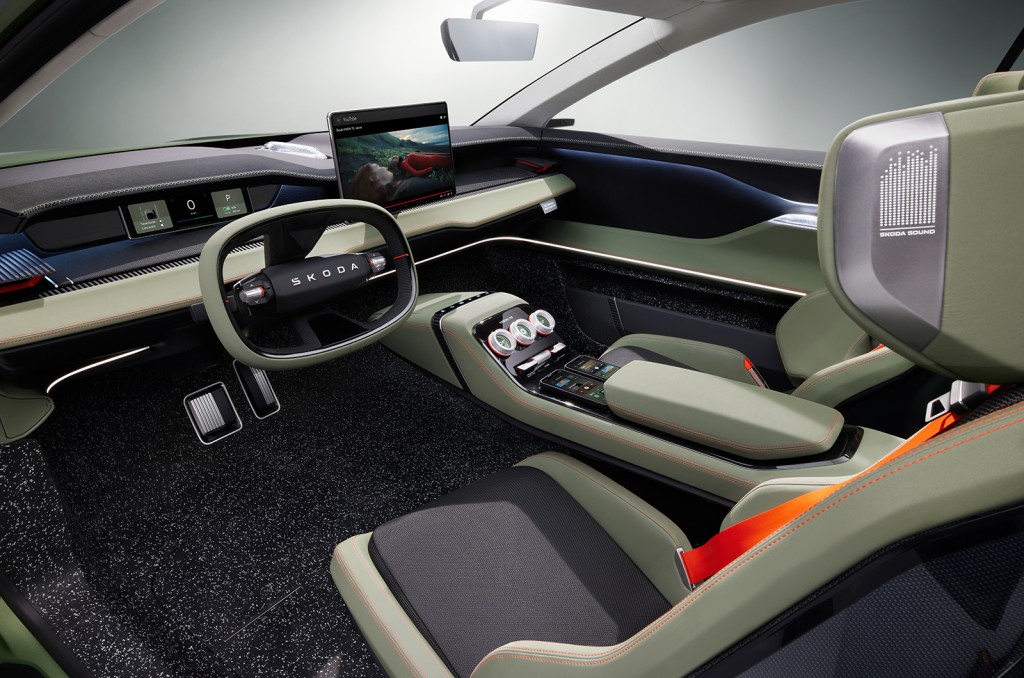 As well as the infotainment touchscreen the Vision 7S gets an 8.8in digital instrument display and a new two-spoke steering wheel that’s flattened at the top and bottom to allow a better view of it. There are haptic scroll wheels on the wheel to control key functions – and in Relax mode the driver can even use a touchpad on the lower spoke.

The centre console features three rotary controllers – two for the climate control and one for the infotainment – and six extra buttons to access other key functions. There’s also a smartphone holder, which enables your phone to be used as a remote trackpad to control the car systems.

People in the front row don’t get all the fun though. There are two further rows to offer up to seven seats, and people sitting there can use special magnet pads to attach their devices to the back of the seat in front of them. Skoda has also designed the fabric so that you can write on it with your finger, to leave short notes. We can just imagine how kids will start to have fun with that on long journeys…

Notably, the child seat is mounted right in the middle of the vehicle in the centre console, which unusually extends back to the second row of seats. The child is placed in it facing away from the direction of travel, offering what Skoda calls optimum protection. And if you haven’t got someone sat in the second row of seats to keep an eye on your little one, a built-in camera means you can watch them on video from the infotainment screen. 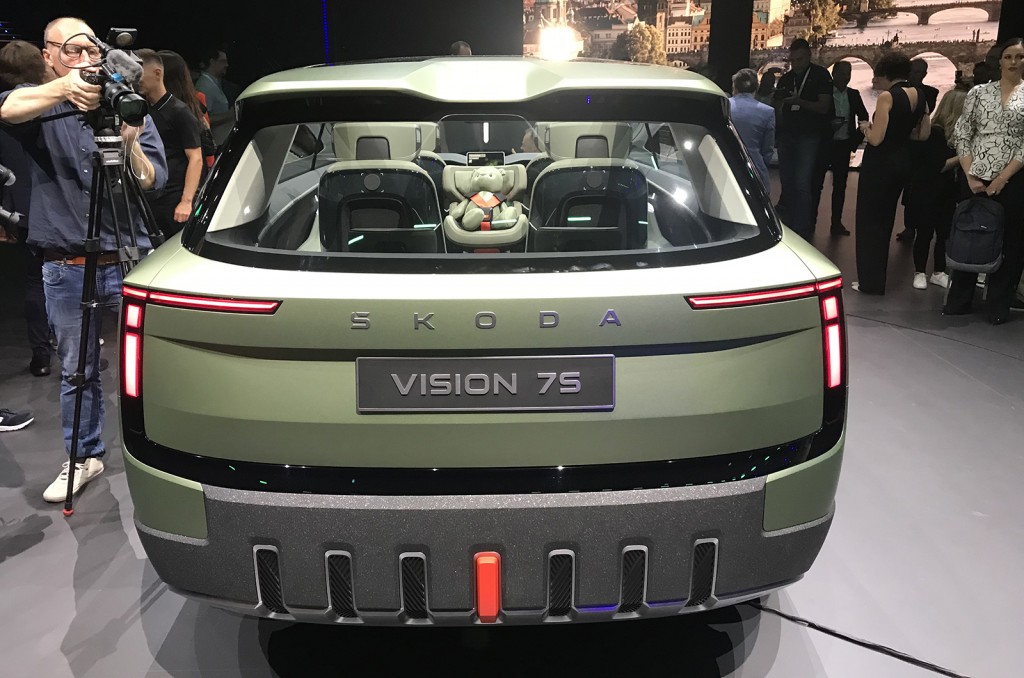 Since this is a Skoda, and is made by the people who brought you an ice scraper in the charger cap and an umbrella built into the door, there are a number of the firm’s ‘Simply Clever’ features built into the car. So the air vents on the dashboard work to gently diffuse air, but if you slide up you’ll get a direct blast of air.

There’s also a magnetic surface under the centre console that you can stick drinks bottles and there like too. And there’s also a large crystal above the infotainment screen that shows the battery level and charging status, and is designed to be seen from outside the car.

Sustainability is also a key part of the Vision 7S design: there’s artificial leather trim used in the interior, along with door panels finished in a fabric made from recycles polyester yarns. Meanwhile, the chrome accents have all been removed and the cars has been finished in a new matt paint. The floor and boot is also made of recycled tyre-veneer.

The Vision 7S shows off many of the key elements of Skoda’s new design language, but there are a few others we’ll run through quickly.

While Skoda’s winged arrow logo no longer features on the car it will still be used in other places, and Skoda has followed the recent industry trend by switching from a three-dimensional to a two-dimensional design. It works better online, apparently.

The Skoda wordmark has also been reworked with a new typography. Skoda wanted to keep the caron above the S, which it says represents a key part of its Czech heritage. So it’s reworked the design so that the ‘hacek’ is now integrated info the first letter. 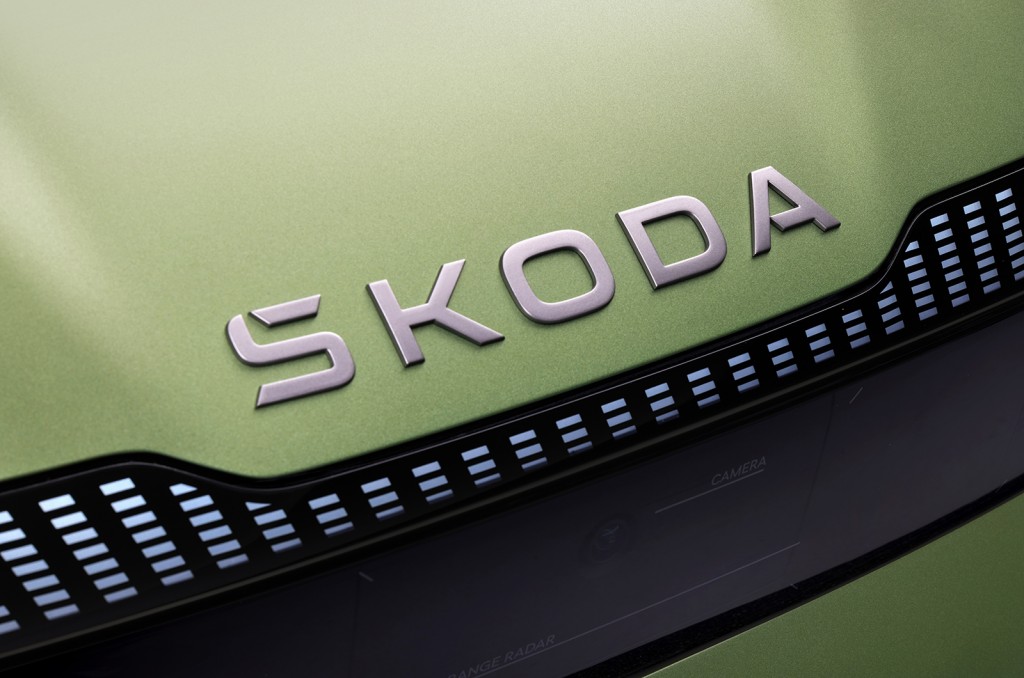 Skoda has also revamped its corporate identify. While Kermit the Frog insists that it’s not easy being green, Skoda bosses clearly disagree: the firm has revised its main colours to Emerald and Electric Green, which it says represents ecology, sustainability and electromobility.

Will a new logo, new font and new colours make future electric Skoda models better? No, but it’s always interesting to see how car firms work to keep standing out from the crowd.

The production version of the Vision 7S is one of three models the firm has confirmed it will launch by the end of 2026 – although while it's the first to be seen, it will actually be the last to arrive in production form. 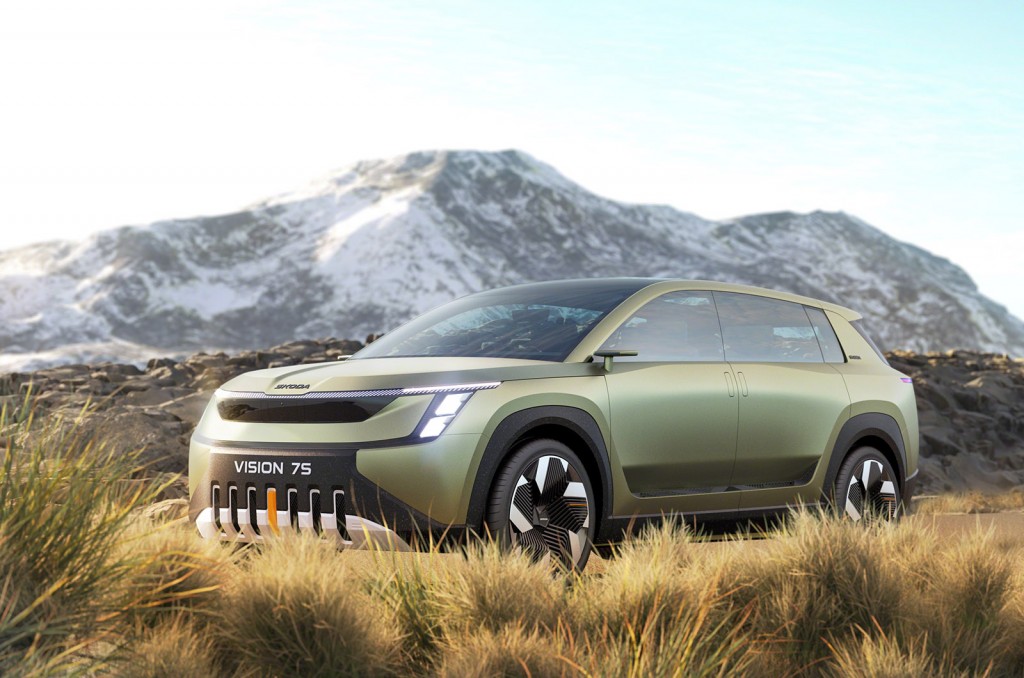 That's because Skoda intends the production model based on the Vision 7S (which will get a proper name that will likely start with E and end in Q) to be the firm's flagship model, so it wanted to use it to best show off the new design elements.

The next model to arrive will be a family SUV that will effectively be an electric equivalent of the Skoda Karoq, or the firm's version of the Volkswagen ID 3 and Cupra Born. Due in 2024, there’s plenty of talk that the machine will be called the Elroq.

Skoda is also working on an entry-level model that will be twinned with the Cupra UrbanRebel and Volkswagen ID 1, and will be built on a special ‘MEB Entry’ platform in Spain. Due sometime around 2025, the machine will have a target price of around £17,000.

While Volkswagen and Cupra have given glimpses of their entry-level models, we’ve yet to see anything from Skoda. But the firm has hinted it will always look to differentiate from its Volkswagen Group siblings, and we’d expect that the Skoda version might offer the largest interior dimensions of the three.

Skoda’s electric ambitions don’t stop there, either – while it’s yet to give much information about the EVs it will launch beyond 2026 you can expect it to continue launching a model per year or so. We’ll also expect both the Enyaq iV and Enyaq Coupe iV to get facelifts to being them broadly in line with the new design language.